Swithin Waterer of Halstead, Essex, explains why he opted to go no-till with a Sly Boss drill. He tells us how it has performed, what he likes best about it and what could be improved.

It’s a 6m trailed Sly Boss, which is built in France by Sly using a modified version of the Australian Boss angled disc coulter.

This is designed to work directly into a stubble or cover crop, but it will also run in cultivated ground, as long as you consolidate the surface first.

Mine is a fairly basic spec with a single hopper that holds about 1.5t of wheat. I drill using the Starfire GPS on my John Deere 6210R – there is a tramlining kit on board, but I usually drill at about 30 deg to my tramlines, which stay in the same place each year.

Up until last year I’d been farming 280ha with a neighbour and planting it with a 3m Mzuri strip-till drill. However, we then teamed up with another neighbour, upping the area to 400ha.

That was too much for us to cover comfortably, so we went in search of a wider one-pass machine. The Mzuri acts as a pretty good transition drill so it was a fairly easy and logical step to go to no-till.

We also hoped it would help us get on top of blackgrass by reducing soil disturbance and preventing the stuff germinating. We looked at a few different machines, including the John Deere 750A, Weaving GD and Sky Easy Drill, but when I saw the Boss coulter at Lamma in 2017 I was convinced it was the way to go.

The coulter assembly has a large-diameter angled disc at the front that cuts the slot and lifts the soil for the seed to be planted via a boot mounted on the side.

Slightly behind the disc is a larger-diameter sprung rubber wheel that, as well as cleaning the disc, puts the lifted soil back down on top of the seed.

There’s then an angled press wheel at the rear, which finally consolidates the seed bed and acts as the seed depth control.

On the Australian version, depth and press wheel angle adjustment require a couple of spanners, but thankfully Sly has modified them to be tool-free and it’s a five-minute job now. 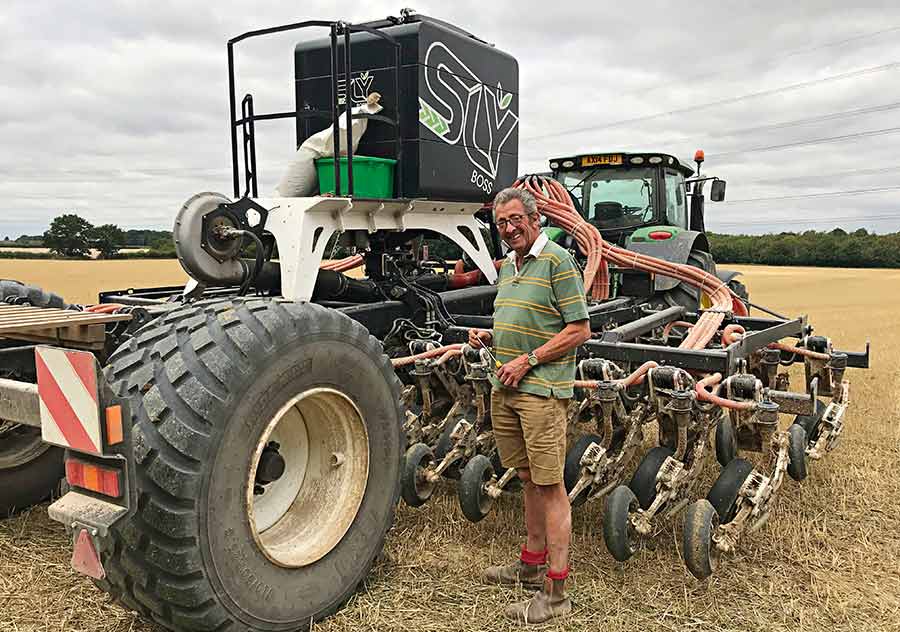 Swithin Waterer with the Sly Boss

How has is performed?

We’ve been impressed so far. We got it in autumn 2017 and most of the 400ha we’ve planted with it has established well. Yields haven’t been that great this year, but that’s more to do with the season than the drill.

Pulling a 6m machine at 11kph means we can cover the ground quickly and our John Deere 6210R handles it easily. I reckon we’re only burning about 7 litres/ha drilling cereals, going up to about 9 litres/ha on hilly ground or when we push it in deep for planting beans.

Because the discs are angled, we haven’t had any problems with hair pinning of straw into the slot and the coulters don’t seem to block up when it gets a bit sticky on the top.

I’m not a purist no-tiller and I will continue subsoiling every five years or so. I also sometimes use a Kockerling cultivator pre-drilling at very shallow depth to encourage a blackgrass chit.

How could it be improved?

We’ve had a few little teething problems that needed ironing out. Early on we found the wings would creep up as we were working, which was a complete pain, and we’ve had a bit of trouble with the electronics talking to the metering system.

This has caused some delays in the switching of seed delivery, leaving us with a few Skylark plots at the start of runs and some seed dribbling out on the headland at the ends.

But every time we’ve had problem, Sly has come out promptly, and these things are to be expected with a brand-new machine and concept.

We’ve also found that the open vents at the top of the cyclones (which allow the air to escape so the seed falls rather than getting blasted into the slot) can block with soil flicking off the rear press wheels in the wet.

One solution would be to put a bend on the top or a mesh guard, but it could be a sign that we shouldn’t be going in those conditions.