Cambridgeshire grower Edward Davison picks out the best and worst points of his Sky Easy Drill, which he bought in 2016 when his crop yields were hammered by a high weed count.

See why he moved to a no-till drill, how the drill has performed and minor adjustments he’d like to see.

We run a Sky Easy Drill Fertisem 6m, which I bought from Cambridge Farm Machinery at Cereals 2016.

I knew the drill would let me seed into both unmoved and cultivated soil and it came with the optional micro-granule hopper, which gives me the option of drilling multiple products using three different application rates.

I sold the plough in 1998 and we haven’t ploughed a furrow on the farm for 15 years. In my opinion, ploughing has to be match-standard to have the desired effect, otherwise it simply gives dormant weed seeds a new life.

Our problems reached a head in the summer of 2015 when we had a weed count that showed a seed head population of 700 plants in the worst fields. That harvest, yields were down by as much as 2t/ha, so something had to change and I went drill shopping.

There are three metering units – two for the split main hopper and one for the micro granules. From the two distribution heads, I can switch off each row individually for wider spacing or change individual coulters to drill different products. 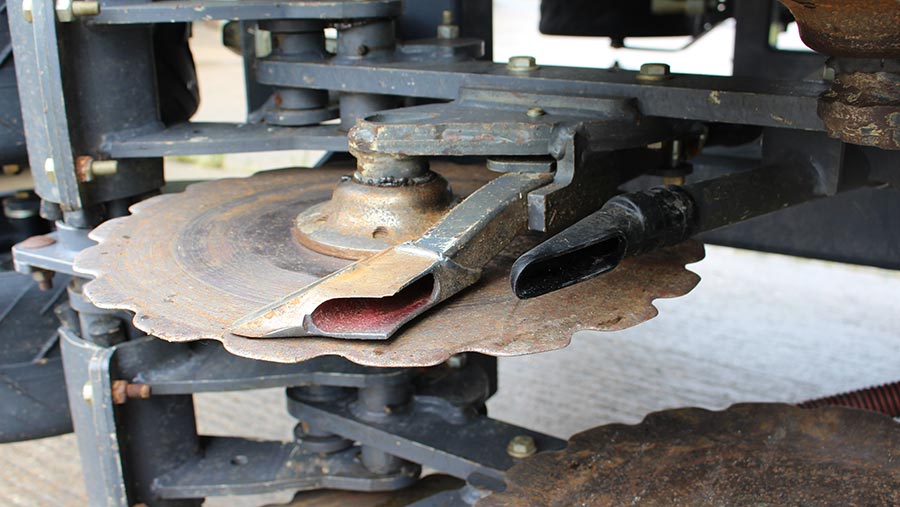 Twin outlets on the coulter discs

Each notched disc has two coulter outlets for the different products. That means that when I drill cover crops, the main hopper will have spring beans applied at 40kg/ha, the rear hopper has arbuscular mycorrhizal fungi blended with buckwheat at 16kg/ha and, in the micro hopper, is a phacelia and berseem clover blend at 5kg/ha.

The coulters work in pairs that can operate at different depths to their neighbours. Depth is adjusted manually from the front press, while the rear steel press wheels are angled to close the slot and pressures are tweaked hydraulically.

Last autumn I drilled a companion crop of clover and phacelia with the oilseed rape, as well as laying down some fertiliser at the same time. I didn’t have to spray a drop of insecticide during the autumn and the pigeons have stayed away, too.

The phacelia acted as a shield for the OSR before being killed off by the frosts, which left room for the crop to get growing.

The clover remains in the ground after harvest, acting as a weed suppressant and living mulch before I drill winter wheat straight into it. In the long term, this should hopefully minimise the number of herbicide sprays on stubbles.

The calibration is great as guide settings are pre-loaded into the cab box to give a rough idea of the settings for each crop. It’s still a manual bag-holding process under the hopper to fine-tune it, though.

I drilled 145ha of oilseed rape and a companion crop last year. There was only around 500kg of companion crop seed at the start and, by the end of the job, I was left with less than a teacup full in the hopper.

The drill has covered over 1,800ha so far and I haven’t had to purchase any wearing metal. However, Sky recognised a problem with the original discs and have replaced them for larger 415mm ones.

There aren’t many bad points, but the standing area around the hopper is tight – especially as the micro granule hopper is mounted up there – and the steps are very steep, which makes coming down awkward. 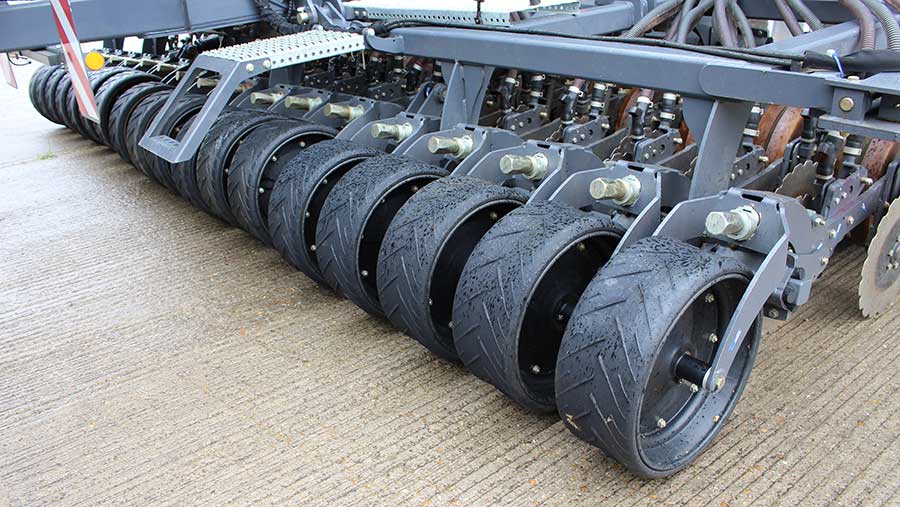 Front press wheels, with manual pressure adjustment above each wheel

On the box, the on/off switch is far too easy to hit – early on I did this a few times and the shut the drill off. It was a challenge to know where I stopped but there’s now some tape over the switch to prevent this happening.

I’ve also installed a couple of cheap cameras in the main tank to keep an eye on the seed level. The readout on the drill screen in pretty accurate, but I would like to see it compatible with John Deere’s AMS.

If I was being really critical then the depth control could all be hydraulic, but that’s me being lazy rather than a genuine bugbear.

The only other catch is that Sky doesn’t make a 9m model. It would fit with my CTF system and one has been talked about. It’s still in the design stages at the minute.