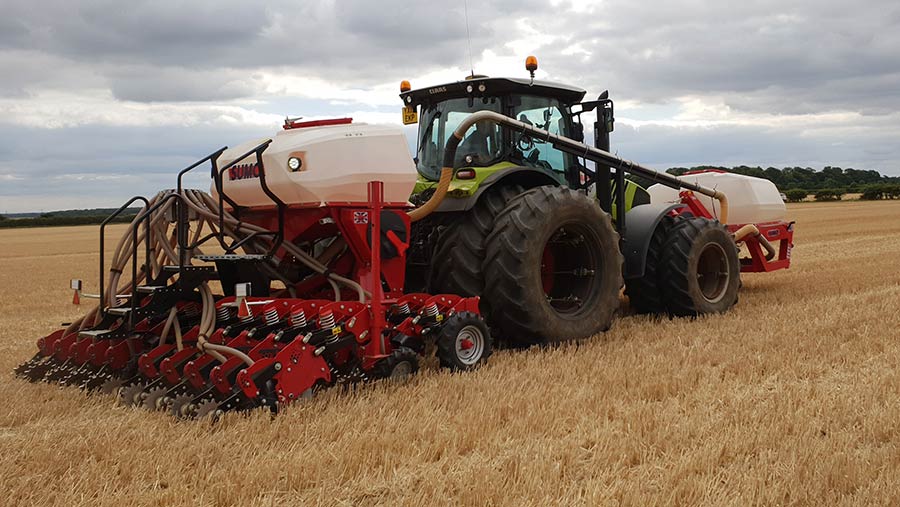 Lincolnshire farmer Tom Hounsfield gives us his verdict on the adapted Sumo DD no-till drill he bought in 2015. He tells us why he switched to no-till, his likes and gripes, and what he’d change if he could.

We have a 4m mounted Sumo DD and additional front hopper. Sumo only makes a mounted version of the DD up to 3m, but we asked for a wider model and they made it.

What we’d seen from our previous Versadrill, and other trailed machines that pick up on two transport wheels, is that you get compaction in the corners and on headlands. We wanted a machine that could be lifted on our Claas Arion 650’s dual wheels to try to reduce that problem.

Our soils have relatively low organic matter and the structure wasn’t particularly good at the time. The farm used to plough and combination-drill everything, but we realised it was just too much for our land and a waste of time and money.

We are trying to improve structure with no-till and cover crops, get organic matter into the soils and save money, too.

We’ve been gradually working up to no-till, first establishing oilseed rape direct with a Sumo Trio, so a moving to a Versadrill in 2010 seemed like the obvious transition.

The Versadrill is essentially a set of loosening tines with a Moore disc drill behind. For the first two years we used the tines, then without for another two. Four years ago, we changed it for the DD we have now, which has a flatter coulter, so closes the slot better and can deal with higher levels of trash.

The openers sit on a parallelogram and are pressurised by springs. For additional pressure, there is a hydraulic weight transfer system on the front of the drill that pushes against the bottom of the link arms to help keep it in the ground.

Each individual opener sits on its own gauge wheel. A flat serrated disc at a slight angle opens a slot for the seed, which is dropped in, and a seed tab drags just behind to prevent seed bounce. An angled steel firming wheel then follows behind and breaks through the side wall of the slot, closing it up and giving better seed-to-soil contact.

The better the soil, the better the drill’s performance and, although people say it’s difficult to no-till peas, once the structure is there it’s possible and we’ve had success with the DD.

Adding in fertiliser has also improved the system. The oilseed rape and spring barley rocket away with a starter fertiliser and we’ve seen good emergence and establishment. It also gives us the flexibility to drill spring barley a bit later, towards the end of March and into April. 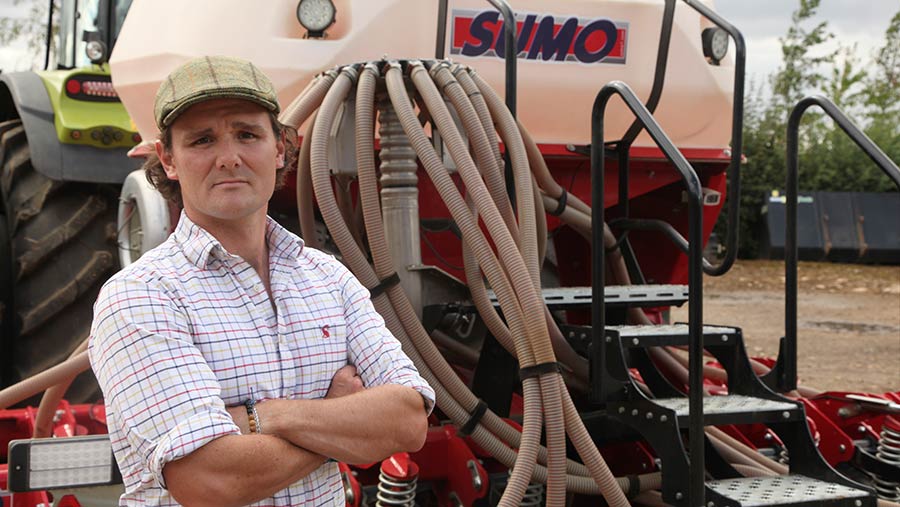 Tom Hounsfield with the DD

I like the way it copes with our high stone content. We had several drills on demo that looked good in theory, such as the Great Plains with its a vertical disc, but most just popped out every time the disc hit a stone. The Sumo’s is at a slight angle, so it pushes straight through.

The modification that clears residue out the way of the disc coulter to prevent hair-pinning in the seed slot is also good. We had problems with the Versadrill in oilseed rape where fast establishment is required to get away from problems such as flea beetle, so it needed addressing.

The strength of the front attachments for clearing out residue isn’t good, particularly in high straw when drilling oilseed rape after spring barley. We strengthened the attachments ourselves and they worked much better in spring barley this year.

The first seed tabs also kept snapping, but Sumo has strengthened those and they haven’t caused a problem since.

The only other improvement I would make is something we’ve already done ourselves – safety stands fixed either side for getting underneath when it’s in the air.