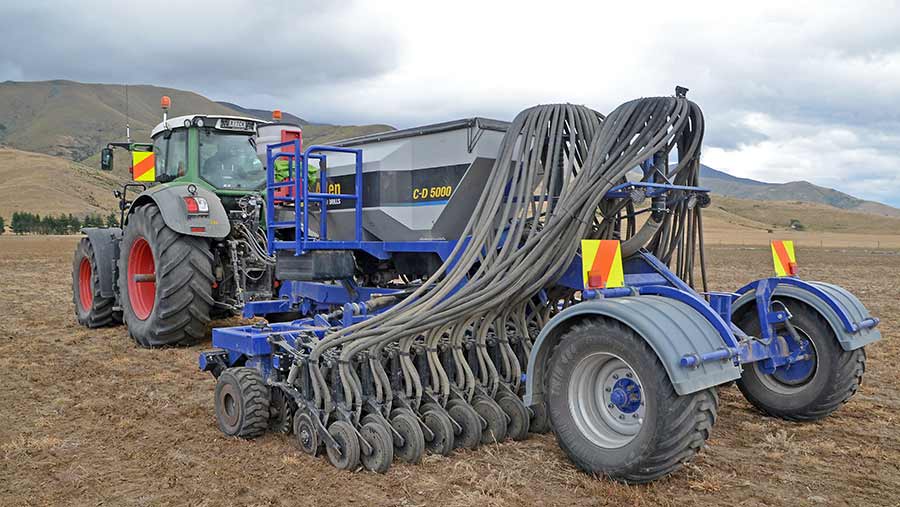 For years, New Zealand has been widely regarded as something of a mecca for direct-drilling enthusiasts.

Despite its modest size, the country has been responsible for many of the innovations seen on no-till seeding rigs that have appeared over the years.

Duncan box drills in the 1970s, Aitchisons in the 1990s and most recently the ultra-heavy, ultra-expensive Cross Slot – a machine viewed by many ‘never-brown’ zealots as the ultimate answer to all the issues associated with direct-seeding.

Aside from these big names, there are a few other seeder specialists working away quietly in the Land of the Long White Cloud – Taege, Thian-Drillrite and Allen, to name a just a few.

It’s that last name that might ignite a flicker of recognition for Farmers Weekly readers. Over the past couple of years, New Zealand Farmer Focus writer David Clark has been pictured on a regular basis standing on the platform of his bespoke-built 6m Allen Custom PD series drill.

Where does it come from?

Positioned smack-bang in the middle of New Zealand’s Canterbury Plains at Ashburton, Allen Custom Drills is a small company that specialises in making bespoke-built seed drills.

It all started in the late 1990s when Canterbury farmer and contractor Dave Allen decided he needed a crop establishment tool of the type that simply wasn’t available to buy.

Running a Great Plains CPH seeder at the time, he wanted to stick with the concept of a triple disc, but make a machine that was stronger and cheaper to run.

So he set about building his own heavy-duty drill rig. The drawings were scratched out in chalk on his workshop floor and quickly the first Allen Custom drill took shape with an Accord pneumatic metering system and triple-disc openers.

It proved a success and word quickly got out across Canterbury, with other contractors asking Mr Allen to put together something similar for them to buy.

“Dad’s drills rapidly got a reputation for being built like brick out-houses and it became apparent that if it was to become a serious business it would have to be more than a bloke-in-a-shed operation,” explains Dave Allen’s son.

“So, after a period working overseas, in 2006 I came back to help turn it into a commercial affair. I taught myself how to use CAD software and started to bring a few guys in to help with fabrication.”

“My partner Deb joined up and that really streamlined the operation. Not only did she bring a level of organisation we’d lacked before, but she wasn’t afraid of getting her hands dirty and we’d often find ourselves in the workshop late at night putting drills together as demand snowballed.” 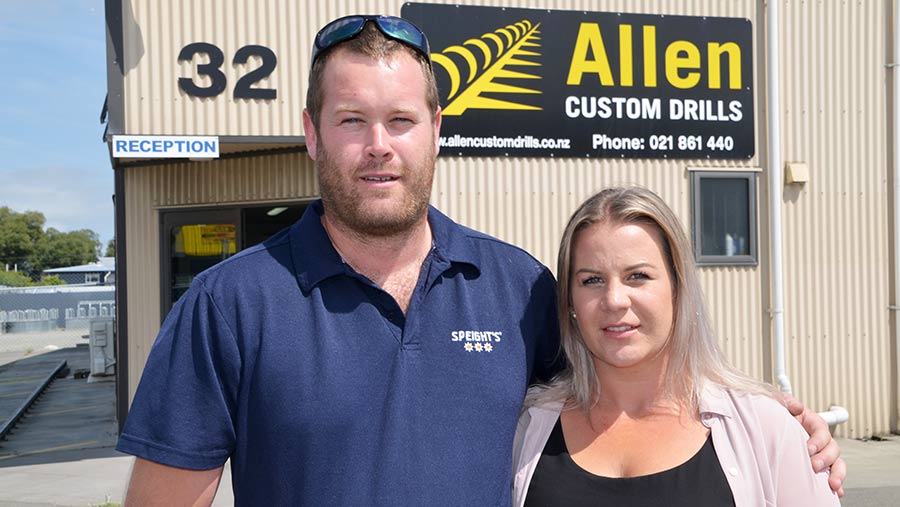 The couple bought the business from Dave eight years ago and moved into a set of purpose-designed buildings in Ashburton town. Manufacturing is still on a small scale, with a team of eight building individual drills to customers’ individual specifications.

“A quarter of our machines now get exported to Australia and we’ve got interest from the US, as well as Europe. Although every drill is built to order, we now have a range of five basic models that customers can spec to suit their needs.”

All use Accord metering systems and RDS Artemis electronic rate control with the option of a twin-hopper grain and fertiliser variant – 90% of Allen drills go out in this format.

The toolbar itself varies depending on working width, from 3m to 12m. Whether buyers opt for wavy ‘turbo’ opening discs or banks of scalloped cultivator discs on the P-D, all are mounted to the frame via a rubber sausage-type suspension system of the sort you’d find on many other machines on the market.

The wing sections have an active, pressurised hydraulic system to ensure accurate penetration and placement on undulating ground.

Meanwhile the twin-disc coulters are individually mounted on simple parallel linkages with following press-wheels that serve to maintain seeding depth as well as seedbed consolidation. 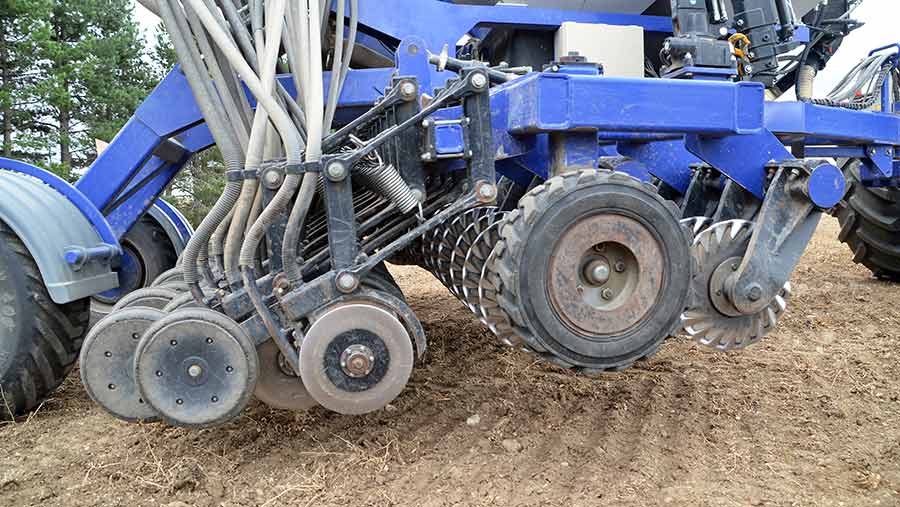 Finally there’s the Allen trademark – the option of a Hiab crane to make the rig a self-sufficient, self-loading outfit when it’s out in the field.

One man with more experience of the Allen concept than anyone is North Otago contractor David O’Neill.

Running three of the company’s bespoke drills, his business does some 4,000-4,500ha of crop establishment every season. 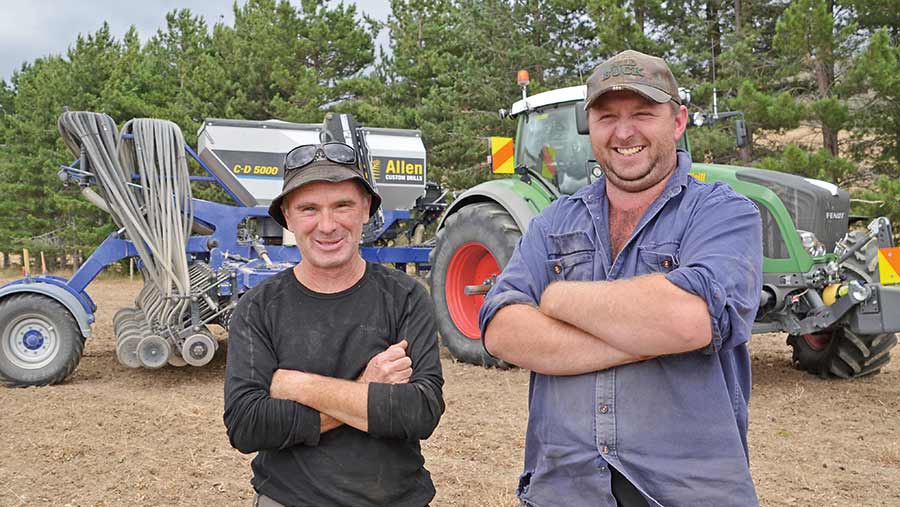 But this is hard country. Unlike the deep alluvial silts of the Canterbury Plains, much of this region is barely more than rock. In fact, 20 years ago it was desert-like, with sparsely stocked sheep stations making use of what little scrub grew.

However, that’s changed dramatically in the past two decades.

Demand for dairy products from China and the rest of south-east Asia rocketed, prompting many Kiwi farmers to look at the options for converting what were once arid, unproductive areas to more productive farmland capable of supporting herds of milking cows and increasing stock numbers on sheep and beef stations.

The key to that was irrigation and, with a number of large lakes formed under various hydroelectric schemes in the 1950s and 1960s, there’s water aplenty in Central Otago.

Consequently huge numbers of monstrous centre-pivot irrigators have sprung up across the area (the longest runs to 1,228m).

“They might have water on tap but these farmers still require the ground to support some sort of pasture,” explains Mr O’Neill.

“Often we get the job of transforming what is effectively bare rock into some sort of seedbed – and that’s tough on machines.”

The process of breaking in new ground is thirsty, time-consuming work. First up, the tussock grass and scrub is mulched, the regrowth sprayed off and then a disc or plough is used to make the first pass.

Much of the time a heavily modified Sumo Trio does the hard work. Instead of conventional winged sub-soiler legs, ripper tines with digger bucket teeth are used to carve channels through the ground without bringing too many stones to the surface.

Behind that, the two rows of discs have been altered so each disc is individually sprung to contour better and carry more fine soil with it.

Next, a 6m hydraulic levelling bar is pulled over the surface to even out any humps and hollows. Then comes the drill, and often a final pass from a heavy vibrating roller to pulverise any remaining rocks and punch them down into the dirt.

“I started out in 2002 with a Duncan Enviro drill doing 1,200-1,500ha of direct reseeds each season but after three years the stony conditions had completely worn it out.

“Next I tried a Gaspardo direct drill but it fell to pieces in that first season. I’d heard good things about Allen drills and so we had one on demo. I really liked the the heavy build, but those early rigid-frame HDs were no good for contouring.

“I could see that the restriction came in having the opening discs way out ahead of the coulters, so I asked if with was possible to bring them closer together, move the transport wheels to the rear and split the frame in two.

In reality that was the first 4m Allen CD drill ever built and over the years it has had mods to cope with the extreme North Otago and MacKenzie Country conditions.

The stony soil could bend discs and meant bearing replacement became a regular task, so the Allen team introduced its rubber-sausage toolbar mounting. With the upgrades in place, that first drill did five years before Mr O’Neill decided it was time for a freshen up.

“The Allen was amazingly robust compared with anything we’d had before. It’s pretty extreme what we’re asking it to do.

“We’re not expecting it to split rocks in half, but it has to be able to ride up over the big ones and push back down between the smaller ones.

“Time inevitably takes its toll and we were starting to shear bolts in the parallel linkages that carry the coulters. So in 2010 we ordered a fresh one and traded the old one in.

“Pretty quickly we realised we couldn’t cover the workload – virtually every farmer in the region had moved over to us for their reseeds and cereal drilling because the Allen was the only drill that could do the job reliably.”

So the team at Ashburton was tasked with converting the old rig to a min-till cultivator drill – effectively a heavy-duty version of the Vaderstad Rapid – that is well suited to getting cereal crops established. It’s still going strong today, as is its replacement.

But with more and more land going under centre-pivots, demand for a robust, reliable means of getting pasture established continued to grow and so three years ago Mr O’Neill ordered his third Allen drill – this time a 5m machine.

It’s proved to be a firm favourite with operator Ben Scott and, pulled with a Fendt 927, it now handles the lion’s share of the drilling workload – some 3,000ha/year.

“I can trundle on at a steady pace – 8-12kph – with the tractor barely going above 1,500rpm and still cover a decent lump of ground each day.

“Having constant oil flow to the wings with the fold rams plumbed into the fan circuit and cushioned by gas accumulators means it will nearly always get the seed in the ground, no matter how hard it is.

“Calibration is a dead simple with the RDS box and often I’m working on my own right out in the back country so having the Hiab crane is a godsend, [SAYS MR SCOTT??]”

As regards wearing parts, the twin-disc coulters will stretch to 2,500ha in the region’s unforgiving conditions while the wavy opening discs will handle about 1,000ha before they need changing.

It’s a similar story for the rubber sausages that provide damping of these leading discs. Changing them is a tricky task because each pair weighs more than 75kg and by their nature they are unbalanced, with the majority of their weight at the rear.

“Ultimately we’re getting a huge amount more work out of our Allen drills than I believe is possible with any other seeder,” says Mr O’Neill.

“We’re asking a lot of them but they’re built heavily enough that they will go into the ground and stay there. That way we can guarantee reliable crop establishment and our customers keep coming back – that’s crucial in the contracting game.”