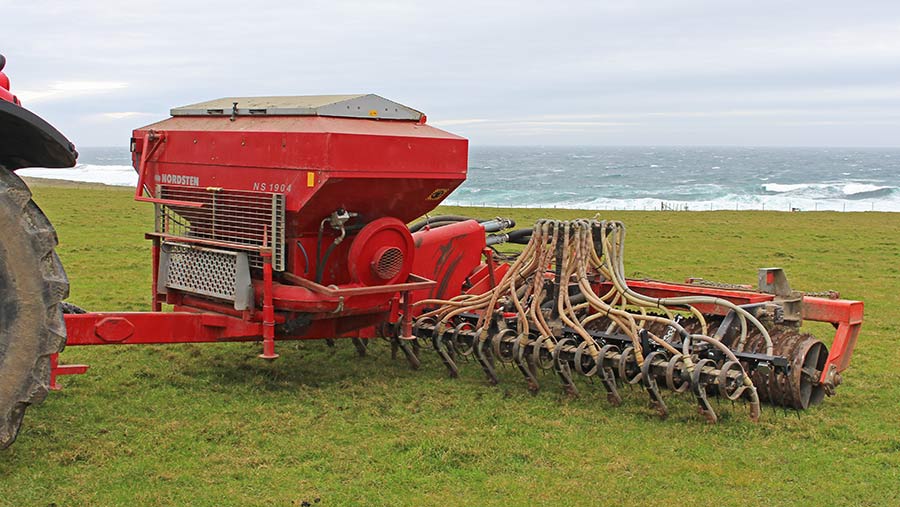 Owning four working drills may seem lavish to most farmers, but for contractors J&S Hay on the north-east coast of Orkney it is the reason the business is able to get 900ha sown on time.

The third-generation contracting firm run by brothers Marty, Stevie and Dunky Hay has had to diversify its fleet to keep ahead of the area’s temperamental weather and there’s little shelter from unforgiving winds beating in from the North Atlantic and beyond.

Although offering a full stubble to stubble contracting outfit, the main focus of the business is drilling and, to that end, the team is constantly working on modifications and tweaks to reduce field passes and improve timeliness of work.

The latest addition is a custom-built 6m rig – the widest the brothers have ever owned.

Orkney has a big dependence on spring cropping – the growing season fills an intense period from April to September, so drilling is full-paced as soon as the weather breaks.

Spring barley is the main arable crop, with tall feed varieties grown to maximise the straw for bedding during the winter.

“Orkney is steeped in a plough culture and virtually every arable field sees a furrow, ideally before the winter,” says Mr Hay.

“If the weather allows us to plough before Christmas then the harsh winters help break down the furrows, but if it’s not done until spring then we have to make a pass with the power-harrow to leave lovely seed beds.”

However, it has been more than 10 years since the contracting firm owned a power-harrow drill combination, which is the most popular way of establishing crops on the islands.

Instead, the Hays employ a brace of Vaderstad Rapid drills – a 3m and 4m – both with split hoppers. 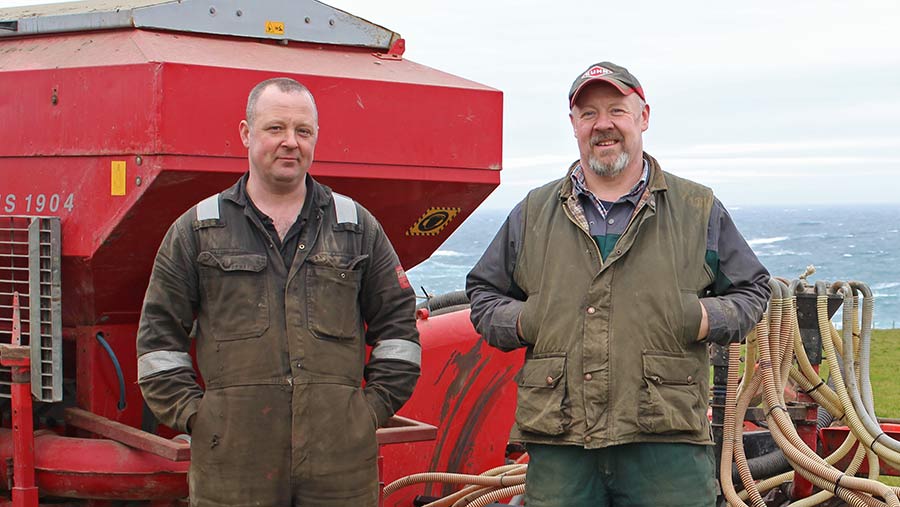 Around a third of the barley crops are undersown with grass. This approach reduces the following spring workload as the grass forms the silage crop for the next year, and Mr Hay’s latest drill is designed to make the job a one-passer.

“Our first drill looked similar but was a grass-seed-only hopper, so we were still making another pass with some fertiliser to give the crop a kick start,” explains Mr Hay.

“Since then, we have bought a Nordsten split hopper to give us the option to do it in one pass.”

The base of the drill is a set of rollers built by Irish firm Cross Engineering, purchased for around £12,000. These have been cut about to accept various add-ons.

Most notably, the drawbar has been extended to accommodate the hopper behind the tractor.

This was originally a front-mounted unit, but Mr Hay wanted a drill that could be taken on and off in 10 minutes, rather than the hour or so it takes to re-attach seed pipes along the side of a tractor.

The hopper, which has a mechanical metering system, still has a front linkage attachment, should it ever be needed. It has been mounted centrally on the drawbar but, due to the added height, Mr Hay had to build some steps to improve access up to the filling area.

He has also made some baskets out of chicken wire that sit at the top of hopper openings to stop lumps falling in and to carry any smaller bags of seed.

The original hopper had some small gorse filters deep inside the hopper and these would regularly prevent seed flowing freely. 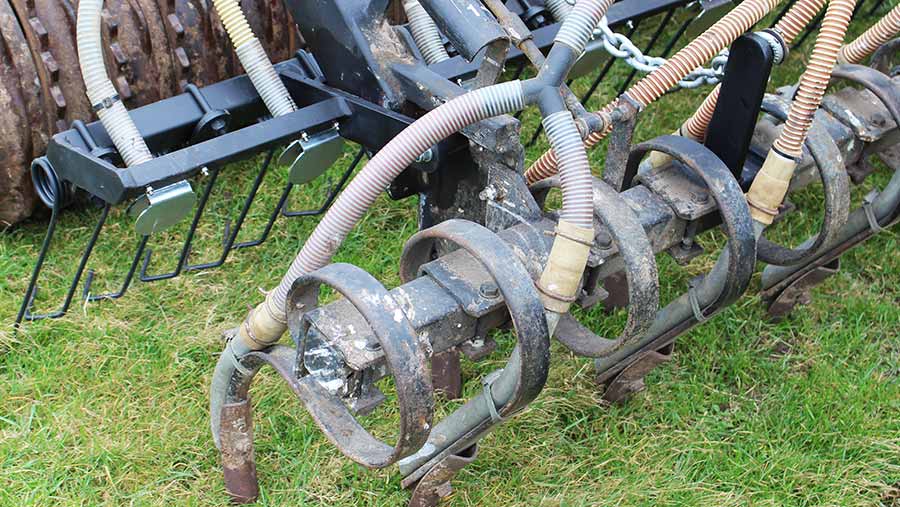 Lengths of drainage pipe were cobbled together and mounted underneath the hopper to take seed to one of four distribution heads – two for each side of the hopper – that are powered by a large PTO-driven fan.

The latest addition to the setup is a fertiliser/grass seed bar that has been added in place of the original levelling board.

The seed spread plates came from Spaldings, with Accord following harrows tickling the soil in front of the rolls to make sure everything is covered and level.

The 34 tines are set at 175mm spacing, but the end two tines on each side share a delivery tube. This halves the seed rate on the end two tines, leaving the GPS to overlap on the return leg.

This way Mr Hay is sure that everything is covered but nothing has been overdosed.

Tines are a mixture of Cross’s original fitments – used for breaking up the soil, but spaced too widely for the Hays’ system – and Vaderstad Cross Cutter versions that have been fitted to the same toolbar.

The Cross units face forward, whereas the spring for the Vaderstads face rearwards. 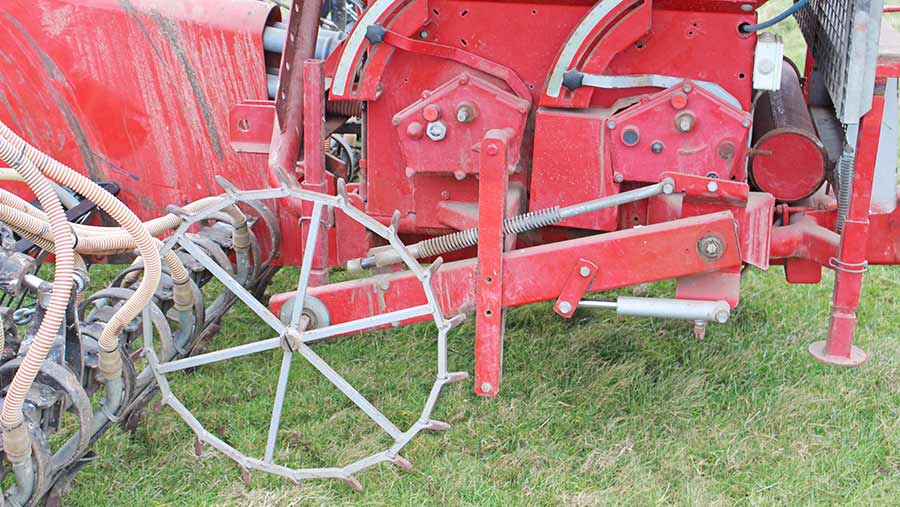 One of the biggest benefits seen by the contractors is that the new drill is 2m wider than either of the Vaderstads previously used and much wider than any power-harrow combi drill on Orkney.

At 6m, Mr Hay can comfortably cover 30ha/day at around 8kph and he says it could be higher if he wasn’t limited by the 3-4ha average field size.

The other benefit from the new drill is reduced fuel costs compared with the Vaderstads or combination drills.

“The Vaderstad drills take a lot of pulling – discs and levelling boards sap power – and will only do a day on a tank of fuel”, says Mr Hay.

“However, the new grass drill will easily do two days before the tractor needs a drink”.

Due to the small field sizes there’s plenty of backing into corners and shunting around, so the new drill had to have an easy way of getting the tines out of work for manoeuvring, Cleverly, both toolbars raise on one spool valve connected by a length of chain.

The seeding tines lift out of the ground first, and once clear of the soil the chain becomes taught and links the two together to raise the fertiliser toolbar with the tines.

When in work, the chain is slack and allows the toolbars to follow the ground separately.

It is still a long rig to transport and this is one of the downsides, with the tight gateways and small roads on Orkney, but it is under 3m-wide and more than makes up for the transport inconvenience in the field.

Have you built your own drill or adapted an existing piece of machinery to better suit your needs? If so, you could be in with a chance of winning a cash prize.

Our annual inventions competition is open for entries and the three categories – simple, intermediate and complex – have a total prize pot of £2,550.

Deadline for entries is 31 January 2020, so if you have a nifty design idea waiting to be brought to life then there’s still time.

To enter, send a few words about the design and how you built it, along with a couple of pictures and some contact details, to oliver.mark@proagrica.com or get in touch with Farmers Weekly on Facebook or @FWmachinery on Twitter.