Stirring up crusted soil surfaces with a light surface cultivator following a straw harrow pass and ahead of direct drilling can improve weed chits, cut slug damage and help cultural blackgrass control. And it can help incorporate manure and ultimately boost crop germination as well.

That was the claim from Suffolk maker Claydon at the official open day launch of its new Terrastar cultivator.

The firm isn’t afraid to challenge the notion that non-inversion crop establishment must be a one-pass process, on the basis that a regime of multiple light passes can still use less fuel and labour than a plough or typical min-till system. 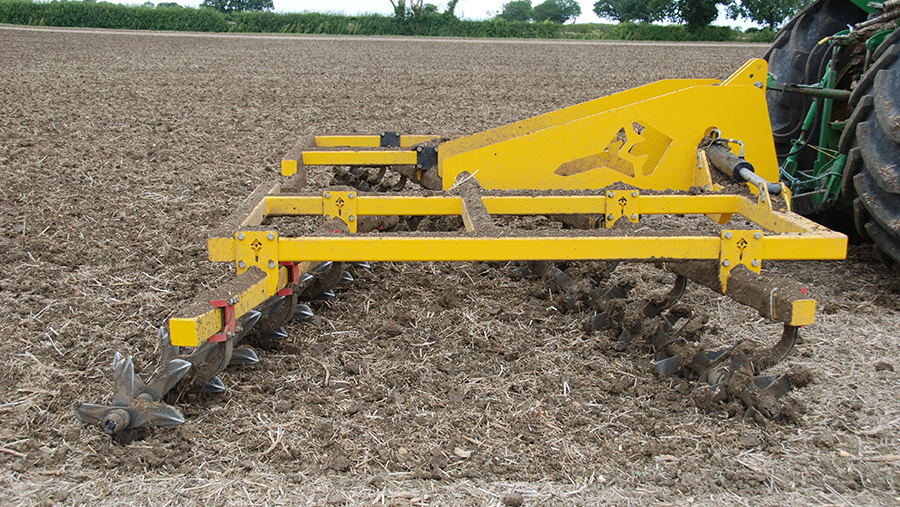 Billed as a complementary product rather than a replacement for its straw harrow, the 6.1m-wide implement, first seen at January’s Lamma show, features two double gangs of rotating steel stars designed to create 8sq cm divots in the soil surface, creating a shallow tilth while leaving the field surface largely intact.

“If there’s less than 30mm of surface tilth before spraying off ahead of drilling, which can be the case on heavy clays and other soils with a tendency to cap, then a poor weed chit will result.

“And because it will also prevent good drainage, then there will be a perfect environment for slug development, with the patches they graze then allowing the ingress of further blackgrass.

“On those difficult soils lacking in surface tilth post-harvest, using the TerraStar after a straw harrow pass will help stimulate grassweed growth by creating just enough loose surface soil without disrupting the profile.

“And if they’re well-timed, further straw harrow passes can then replace intermediate glyphosate applications, as the harrow can effectively destroy young blackgrass seedlings.”

It calculates that, with operating cost being similar to that of the straw harrow, at £8/ha, the combined cost of operating the two machines is still significantly less than a more intensive cultivation.