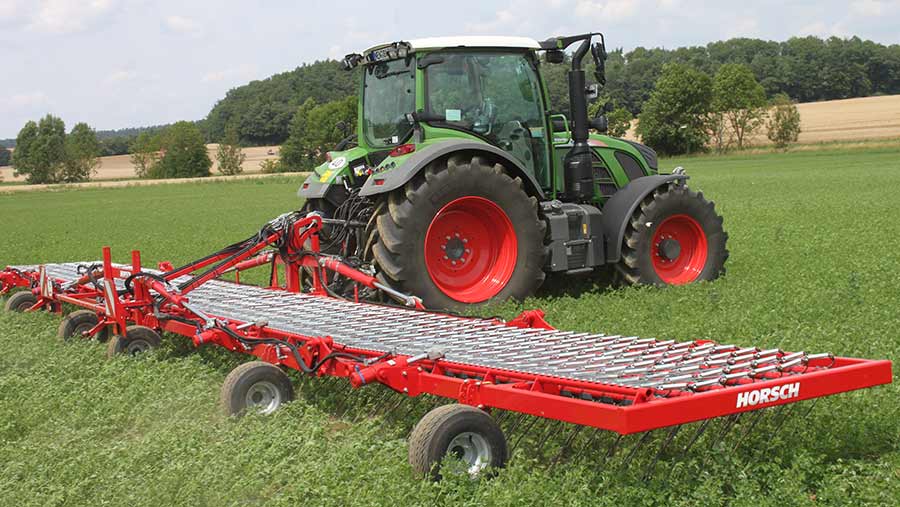 Alongside its continued investment in sprayers, the German maker has launched its first weed harrow, which it is anticipating will attract interest from organic and conventional farmers alike – particularly those working on wider row spacings or band-sown crop rows.

The three-point linkage-mounted Cura ST is available in 6-15m working widths and has six tine rows.

Depending on whether gentle or aggressive action is required, the support pressure of the harrow tines is continuously hydraulically adjustable from 0.5kg to 5kg, with Horsch claiming almost the same forces are maintained for the whole spring deflection.

Tines are individually secured in a way that prevents side deflection, said to ensure they are kept precisely on course for minimal crop damage.

For those looking to mechanically weed between the rows of crops sown on wide spacings, such as maize and sugar beet, the Transformer VF is the new Horsch toolbar designed for various inter-row hoeing applications.

Incorporating an integral lateral sliding frame, it can be fitted with a range of parallelogram-mounted tools to work at different row widths and spacings, and can be guided through work either manually or in conjunction with an Isobus-operated camera system.

The 6m and 8m models fold in three sections, while 9m and 12m implements are five-section machines, with all having a 3m x 4m transport width/height.

The wings on all versions lift automatically when the implement is raised at headlands, to aid turning close to field boundaries.

Clearance beneath the frame is 660mm, allowing relatively late use in spring-sown crops, says Horsch.

The Transformer VF can cover row spacings from 25cm to 90cm and there is simple lever-based working depth regulation on the cultivator frame, so units can be hydraulically pressured for hard ground and individually lifted via section control.

Options include covering discs for the hoeing tools to protect young crops from damage.