There was plenty of evidence at Cereals 2016 that ploughs still have a significant role to play, judging by the new and improved models that manufacturers had on display.

Whether rotational ploughing within a minimum tillage programme to help combat grassweeds or creating a fresh canvas for a late-sown wheat crop after potatoes or sugar beet, the plough’s ability to bury trash remains a valuable asset.

While the UK-built Hubert AH – successor to the Dowdeswell plough – made its working debut on the demo plots, Őverum ploughs were unveiled in their new red and silver Kongskilde colours along with the new XLD body that accommodates deeper working and tractors running on wide tyres. 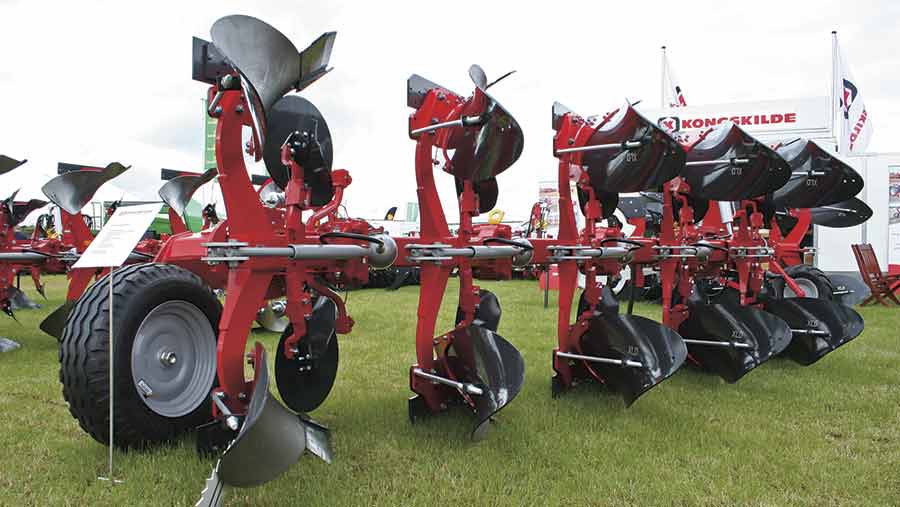 While the standard AX body is effective at relatively shallow depths, its abilities are more limited beyond 20cm or so, whereas the XLD is noticeably deeper and a little longer, so it has the capacity to move more soil.

It can, therefore, work deeper and create a wide enough furrow bottom to accommodate large tyres up to 710mm wide without them running on the furrow slice.

A prominent point leaves a broken furrow bottom and the shallow angle of attack is designed to preserve the XL mouldboard’s low draft characteristics.

At the same time, the patented helical shape of the mouldboard aims to invert the slice to bury residues while leaving a broken finish in all soil types including heavy clays.

The XLD is designed for 15-35cm ploughing depths and widths from 40-55cm, and is available across the Kongskilde plough range.

Amazone continues to build its plough portfolio market with new bodies for different soils and situations, showing the W 35 C-blade spiral mouldboard for heavy loam and clay soils on the equally new hydraulic auto-reset Cayron 200VS-100. 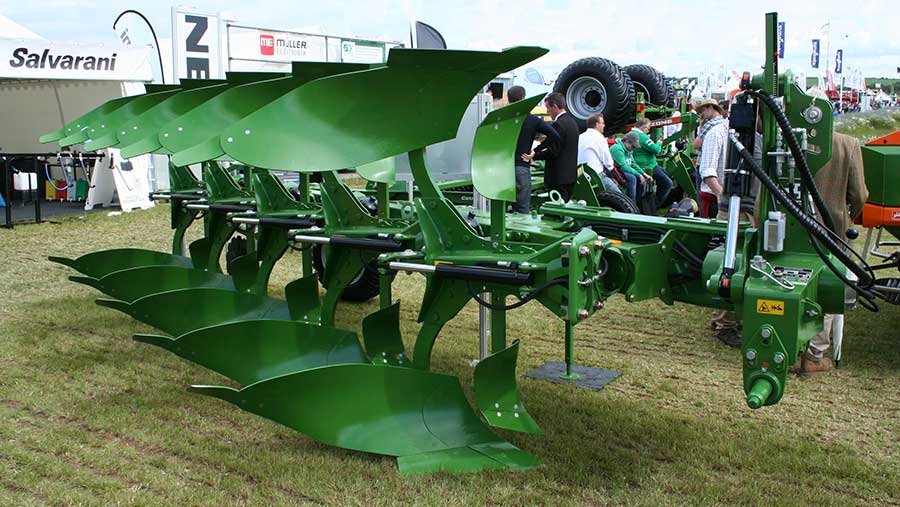 The spiral shape of the W 35 aims to combine effective inversion with low power requirement, while clearing a wide furrow bottom to accommodate big tyres.

In addition, Amazone introduced the S 35 C-blade scrolled mouldboard, which has a long profile to turn soils progressively and so invert heavy, sticky material effectively with the least possible draft and risk of soil adhering to the metal.

The new hydraulic break-back plough comes in five- and six-furrow sizes with a headstock rated at 240hp and clearances of 100cm point-to-point and 83cm under the beam – the same as on the shear-bolt plough – to ensure sufficient trash clearance.

Release force is adjustable from 800-2,000kg within the cab, making life easier for operators when setting up and to encourage them to fine-tune the system to prevailing conditions.

The leading body automatically operates with an 18% higher release force for more assured penetration on the headland and elsewhere.

When it does trip, the mechanism progressively reduces the release force as the body assembly moves back and upwards to a maximum clearance of 45cm, before increasing again once the obstacle is passed to get the body back into the soil as quickly and cleanly as possible.

The body can also move up to 20cm sideways to minimise disruption should it strike the edge of a stone.

This characteristic is also evident on the Lemken Juwel 8M, a mechanical control version of the Juwel 8, which comes with electronic control of most functions. 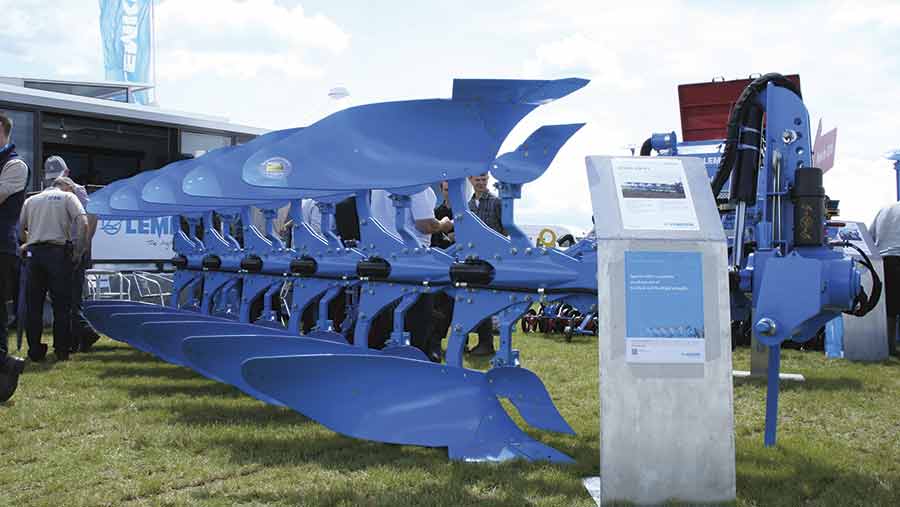 The newcomer will progressively replace the long-established Opal range and in addition to being available in versions with manually- and hydraulically-adjusted working width, it features stronger, more substantial main beam pivots, the sideways leg deflection for added protection and a simpler to use transport lock.

Ploughing with the tractor wheels out of the furrow is possible with latest versions of the Kverneland PN auto-reset and RN shear bolt protected semi-mounted ploughs, which previously have been suitable for in-furrow operation only. 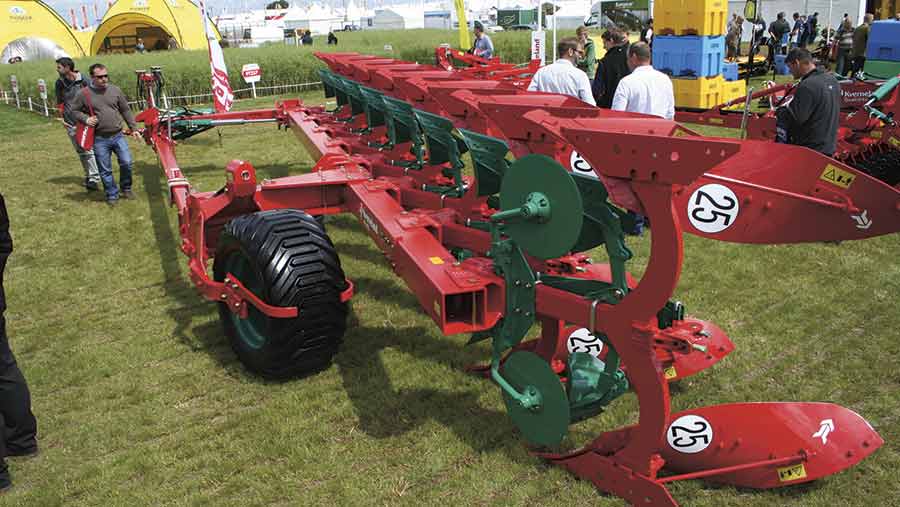 The latest spec allows the ploughs to be used either in-furrow or on-land, with purely hydraulic adjustment between the two, operating behind tracked or wheeled tractors with up to 3.6m outer wheel track width.

With 100cm point-to-point clearance, the PN/RN ploughs are available in six- to nine-furrow sizes, and with 115cm clearance five- to eight-furrows, with one removable furrow in each case.

The XLD body is noticeably deeper and a little longer than current Kongskilde designs, giving it the capacity to move more soil and so work deeper leaving a furrow bottom wide enough for 710mm tractor tyres.

Kverneland PN auto-reset and RN shear bolt protected semi-mounted ploughs can now be operated on-land as well as in-furrow on tractors with up to 3.6m wheel track and benefit from several upgrades, too.

Lemken Juwel 8M with manual control is derived from the electronically controlled version to progressively succeed the Opal.

Greater flexibility in the use of tillage implements is offered by Lemken’s Gigant system tracs toolbar.

It has a pair of three-point linkage assemblies so that two cultivators can be used to create a combination up to 16m wide for very high horsepower tractors while retaining the ability to use them individually on smaller power units.

This set up comprises two Heliodor short disc cultivators for shallow stubble cultivation on light and medium soils, with each 510mm dished disc carried on a leaf spring. Leading tines can be added.

The one-time Suffolk manufacturer was acquired in 2006 by its importer in France, where a new factory completed recently now builds a product range that includes graders, hoppers, elevators, conveyors, box tippers and fillers.

For the Cereals event re-launch, Downs produced a UK-spec 16m telescopic elevator with a high-lift kit that raises the hopper end to 1.8m for filling container lorries.

It has an 800mm wide rubber belt with mid drive – so the belt is pulled rather than pushed from one end – and with minimal electronics to keep things simple.

A sleeker chassis houses the latest stone and clod separator from Standen (above), which is available as a four-web machine for the first time.

The first three webs are interchangeable to account for different wear rates and so minimise running costs.

The all-star version, which comes with an under-web to allow a more open roller arrangement while taking out small stones, has 10 rows of stars injection moulded from a more durable material and double helix installation for maximum separation performance.