McConnel’s Seedaerator is a single-pass strip-till dril that cultivates and seeds the crop in bands. Nottinghamshire farmer Jack Tooley talks us though the highs and lows of his machine.

Four years ago we switched from running a 4m power-harrow combination drill to a 3m McConnel Seedaerator.

To start with, we bought an ex-demo machine with shear-bolt protected legs, which we ran alongside the combi drill as a bit of a test.

But after the second season we were suitably impressed that we decided to order a new one. Our ground is fairly stony in places, so this time we opted for auto-reset legs.

A micro-granular fertiliser applicator was also added, as we like to get some seed-bed nitrogen on to get the crops going. The res

t of the fertiliser goes on as liquid fert, so it gives the added benefit of one less run through with the sprayer. 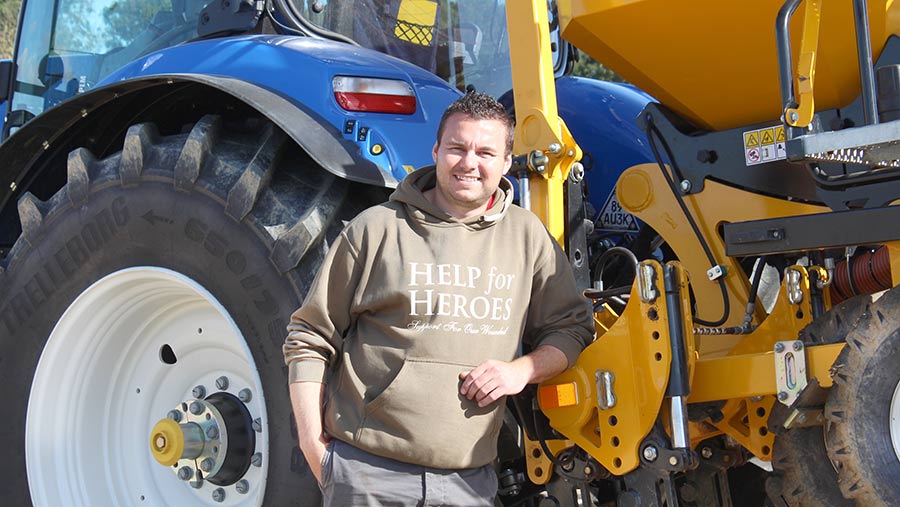 There were a number of reasons, but primarily we wanted to improve our soil structure and reduce the compaction caused by multiple passes with heavy machinery.

After sustained rain it used to be about a week before we could get this kit on the ground, but now we only need to leave it a couple of days.

We didn’t look at any other drills initially, as our local dealer Chandlers had the ex-demonstrator in stock and we’d been pleased with our other McConnel kit.

However, before we bought the second one we did eye up a Mzuri. It was an impressive machine, but we liked the simplicity of the McConnel so decided to stick with what we knew.

It’s a strip-till drill so works the ground in bands spaced 333cm apart before planting the seed and consolidating the ground.

At the front, there’s a leg that does the loosening work, which can be pushed down to 300mm if needed. Here, we tend work at about 150mm and that gives us plenty of soil to play with.

After the loosening work, the drill’s tyre packer firms the ground before the coulter plants the seed. McConnel has a number of different coulter options, but our drill is fitted with the 150mm dual-product version that allows us to put seed and fertiliser in the same band.

A rubber press wheel consolidates the seed-bed and there’s a following harrow to do the final levelling. The finish isn’t as fine as a combi drill, but after it’s been rolled it looks good.

We were impressed how easy the transition was from the old system and we haven’t seen any drop in yield since we made the switch.

As I mentioned earlier, we started off running the Seedaerator alongside the old system and it wasn’t long before all that stuff was parked up. As well as the extra time and labour, we worked out that we were saving about £6,000 a year in fuel.

The only heavy cultivation we have done in the past couple of years is to lift some compacted areas with the Shakaerator. However, we have been running over the stubbles with our Amazone Catros discs to get a blackgrass chit before drilling.

This year, we’re hoping not to use that either as we’ve purchased a Wallner straw harrow to do the job instead.

We’ve also got a Claydon Terrablade hoe on the way, which we’re planning to use on the front linkage to take out any late-germinating blackgrass in the inter-row as we’re drilling.

The drill works well in most conditions, but when it’s really wet the soil can start to pick up on the tyres – we stop drilling whenever that happens.

Also, in previously loosened ground it ideally needs to be teamed with a front press to firm the ground up.

Calibration is a real fiddle as there’s very little space to get the bag under the metering unit. Therefore, I’d like to see the design of that altered a bit.

Also, the wearing metal is pretty pricey. We got about 250ha out of the first set of points and to replace the whole set of nine costs £1,800. However, McConnel did help us out with the first set.

I think part of the problem is that the drills aren’t very common and that pushes the production costs up.