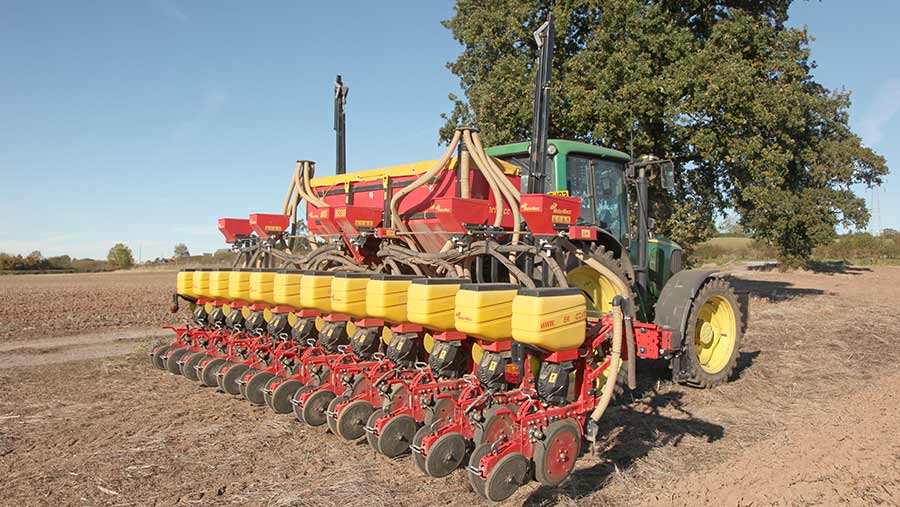 It wasn’t long ago that forage maize was a rare sight in the East of England, but after AD plants started appearing, the popular AD feedstock crop is now a regular fixture in many rotations.

Seeing a business opportunity back in 2013, farming and contracting business JW Parker & Sons decided to dip its toe into AD maize after a plant opened its doors just 10 miles down the road.

However, with no maize kit to get his first crop in the ground that spring, Keith Parker – who manages the third-generation family business with his brother, Graham at Wellow – started a search for a drill with row width adjustment.

This culminated in placing two MaterMacc precision planters at the heart of his drilling operations.

A neighbour had bought a new MaterMacc MS8230, through then UK agents Weaving Machinery, so he hired the machine and was impressed enough to buy it the following season.

“Our neighbour didn’t want to continue with maize and had it up for sale and as we’d had a good experience with it and wanted to expand our maize area, it made sense,” says Mr Parker.

The drill Mr Parker bought is unique in the market, with 12 seeding units sitting on a hydraulically-folding 6m toolbar, rather than the normal eight-rows across the same width.

Using its patented Easy-Set system, Mr Parker can configure the seeding units to work at multiple spacings – from 12 rows at 37.5cm to eight rows at a more conventional 75cm – by changing limit switches on the toolbar’s sliding mechanism.

This typically takes about 30 minutes, and for moving between fields, all seeding units squeeze into a 3.2m transport width, making it ideal for a contractor getting in and out of tight field entrances. 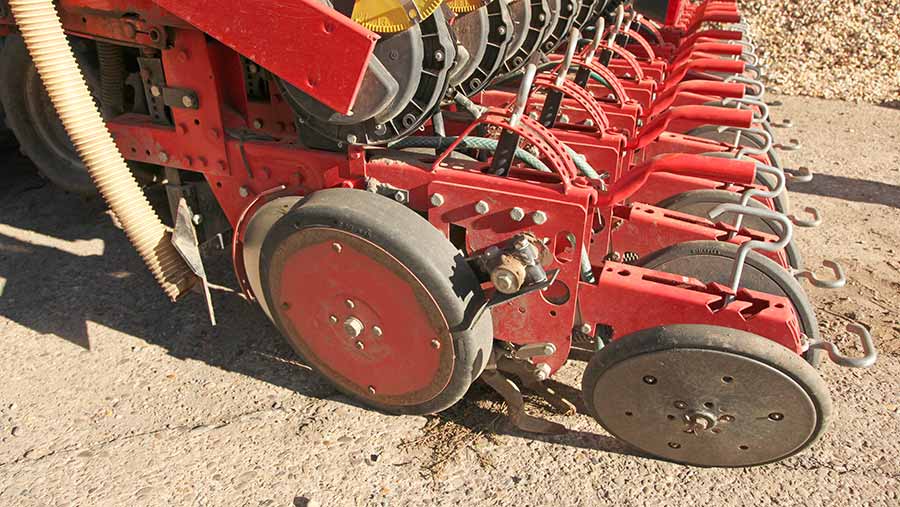 The row width flexibility that the Easy-Set system provides is ideal for Mr Parker’s needs, with the AD customer wanting crops drilled on 50cm rows, rather than the traditional 75cm used when planting maize for forage.

Evidence suggests that the slightly narrower row spacing produces a denser crop with higher fresh weight yields and a faster dry down at harvest, which combined gives a better methane gas yield during the AD process.

“You can adjust the rows really easily, it’s just a case of releasing some pins and changing some steel bars and you can effectively drill at any row width you like,” he explains.

Despite the ease at which rows can be adjusted on the first drill, an expanding area saw Mr Parker add a second drill to the line-up in 2018 in the shape of a secondhand MaterMacc 8230 PRO.

The 2014 model has the same Easy-Set toolbar system, but has eight seeding units across its 6m span rather than 12.

Like the older drill, it also has a large fertiliser hopper – used to apply DAP down the spout with maize – and microgranular application is also an option.

It is now used to drill maize in 75cm rows where specified, while the 12-row machine predominantly sticks at 50cm spacing for biogas maize, oilseed rape and, for the first time this year, stubble turnips.

“Two have been better than one and we now have room to expand.

“We also have capacity to keep getting through the acres when the weather is catchy, which keeps the customers happy,” says Mr Parker.

Arguably, one drawback of both drills has been the pace of operation.

The vacuum-based mechanical metering system is unable to reach the forward speeds of the latest pressure-based, electronically-metered precision drills. 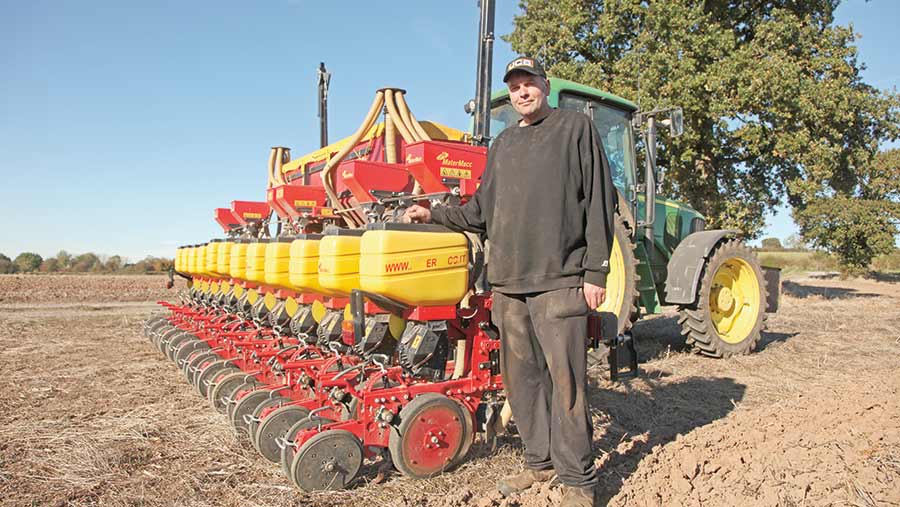 However, Mr Parker argues that conditions often dictate the fast forward speeds touted by some manufacturers can’t be reached without compromising seed placement, which is very accurate from the pair of MaterMacc machines.

The 12-row model is run at 8-9km/hour and the eight-row a gear less at 7-8km/hour, as it is working a bit harder to get the required seed rate into fewer rows, he explains.

“We’ve had comments on how even and well spread the crop is within the rows and I think that is partly down to our lower forward speeds.

“With the Vaderstad Tempo or other high-speed drills, you are paying a lot more money just to go faster, but unless you have perfect seed-beds and big fields, I don’t feel the extra investment is worth it.”

Back in 2013, Mr Parker dabbled with precision drilling oilseed rape with his Kvernland beet drill, and combined with his Trimble RTK guidance and auto shutoff, it made an impressive job.

The only issue was the slow and laborious task of changing all the seeding discs on the metering units, which took several hours.

With the farm’s rapeseed area relatively small, it wasn’t really worth continuing with the experiment.

However, on the 12-row MaterMacc MS8230, switching from a 5.5mm maize seeding disc to a 1mm disc suitable for oilseed rape takes just half an hour, and has seen precision planting of rape continue on 50cm rows. 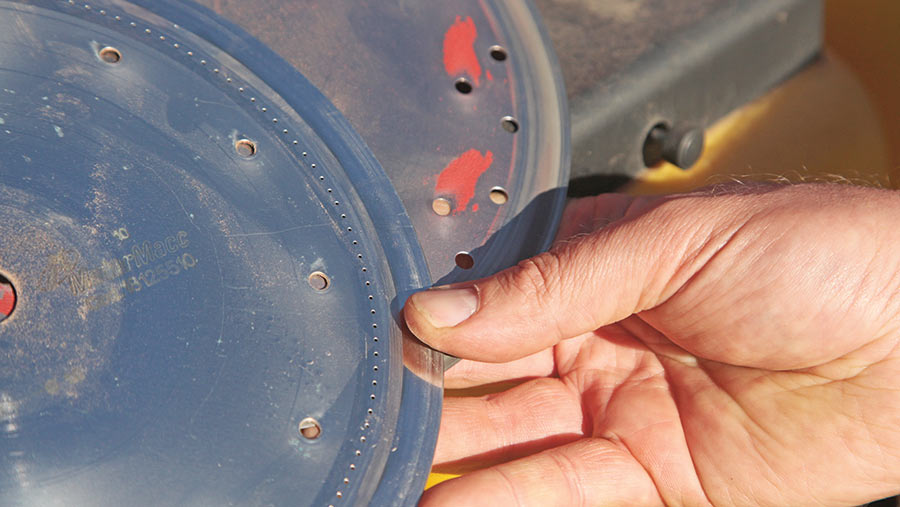 “It has performed well on the OSR and we’ve tried some stubble turnips for the first time this year and the seed is even smaller,” adds Mr Parker.

Gripes on the machines for Mr Parker include the fiddly bout marker system, which requires the operator to get out of the cab and manually fold the arms in or out between fields and adds time to the day.

He would also like to have electric metering on both machines and enable auto shut-off.

This would help reduce overlaps, save seed on headlands and allow for tramlining.

This is something the AD plants are keen on doing so a tractor and slurry tanker on 900s can apply digestate to a standing crop in the late spring with a 24m dribble bar without running over plants.

Mr Parker has looked at upgrading the control boxes and adding the feature to the drills, but at a cost of £3,600-£3,800, it might have to wait until the machines are replaced.

The good news is the Italian manufacturer will officially launch an electronic metering system for its range of precision planters at Lamma 2019 at the National Exhibition Centre in Birmingham.

It will be Isobus compatible and is available on all new orders for delivery next spring ahead of the new maize season.

“We would take a look at other drill options, but as they’ve brought out their own electronic system, we’d happily consider a MaterMacc again.

“Now there is an established dealer at Boston [Robert H Crawford & Son], the service has been good, too,” adds Mr Parker.