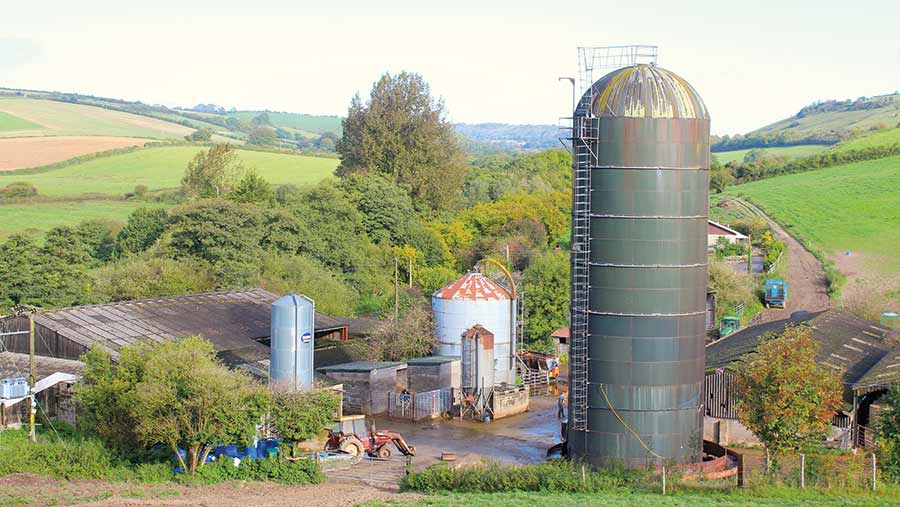 It’s not unusual to see ranks of tower silos standing across the rural North American skyline, but the sight of one in Dorset is far more rare.

Tower silos started in the USA and came across to the UK in the early 1960s, offering farmers the chance to automate feeding while taking up far less space than a conventional clamp.

Many are still in use across the USA today and, although they enjoy an enduring legacy across the pond, dairy farmers in the UK have moved to favour huge clamps capable of swallowing several 18t trailer loads in quick succession to keep the forager hoovering up acres of grass.

The need to fill clamps in tight weather windows rendered many of these old silos redundant, as the large machinery now used to chop and haul the silage has far outgrown the pedestrian-speed silos.

However, breakneck harvesting speeds aren’t for everyone. Jim Horsington, along with his brother Tom and father Fred, still uses a 60ft silo to store his silage every year, and he told us why the family farm isn’t ready to conform just yet. 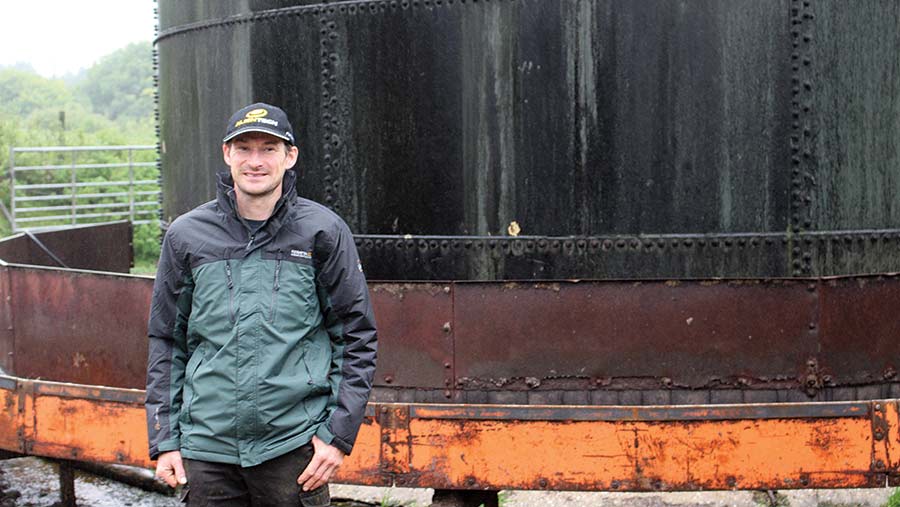 Jim Horsington uses a 60ft silo on the family farm

The silo is a Baythorpe crop store and it has a single skin glass enamel wall, which is the same material used to build slurry stores. It stands 60ft tall and can lay claim to being one of the first type of automated cattle feeders produced commercially.

Why did you install one?

My grandfather visited the States in the early 1970s and saw how well livestock farmers were getting on with them. With our farm being so close to a river, he knew it would help keep silage effluent away from the water course and be a good space-saver, too.

Between him and my dad, they installed one on our main base here near Cerne Abbas, outside Dorchester, and a second at close-by Piddletrenthide. Surprisingly, we only needed to lay a 2ft base of reinforced concrete underneath the silo.

Both are still in use today and have been every year since they were put up in 1974.

Did they look at any others?

In the local area, a few farmers had installed bottom discharge silos, but had issues with the silage bridging on the out-loading augers when the silage wasn’t perfect quality.

The silage comes in from the field and is tipped into the 5t-capacity loading bed, which limits us on the size of trailer we can run. The loading bed and chute are only needed for filling and are dismantled and dry stored for the rest of the year. 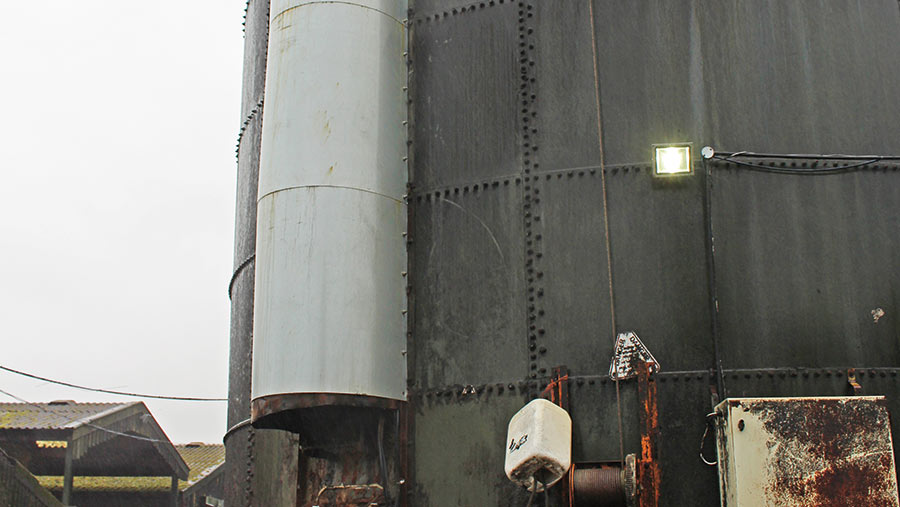 The silage is blown up a 12in pipe, which sits on top of the 20-year-old Gehl 99 blower. It runs on a 1000-speed PTO, so the Fendt 211 tractor can just chug away at around 1,400rpm. At the top, the pipe connects to a curved chute – similar to a forager spout – to spread the crop evenly across the whole silo area.

As it fills, the silage compacts under its own weight and, when the doors at the top are closed, a carbon dioxide layer forms on top of the crop. The total capacity is 500t.

It’s very simple but does take an engineering eye to keep it running smoothly. With some fine weather and good-quality silage, we can fill the tower in five days.

What makes it automated?

Once the silo is full the loading bed and fan are removed, and the circular feeding table – which sits on small guide rollers and rotates around the base of the silo – is connected back up. 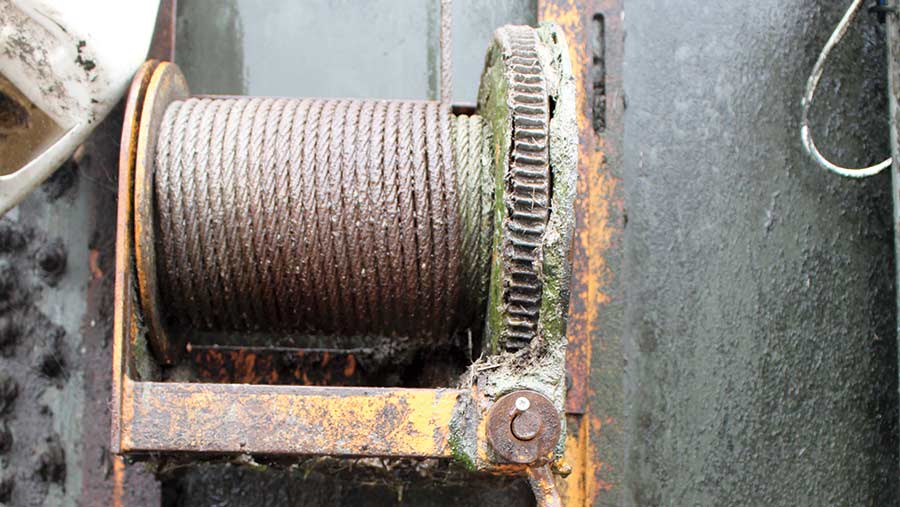 A manual winch is attached to an A-frame

This silo discharges from the top so has an A-frame located inside that is attached to a manual winch on the outside for height control. The frame has to be taken apart for loading the silo and is reconnected when the silage is ready.

It supports a horizontal auger that circles the silo, shaving of the silage as it’s lowered.

Small doors run the length of the silo and, in order for the silage to exit, they have to be removed. This means climbing up to the top with a 13mm spanner and opening the doors as the winch is lowered. The silage works its way out of the door and falls down onto the feeding bed via an external tube.

The bed then rotates to get an even fill and the cows can feed as it’s working, similar to a baggage carousel at airports. 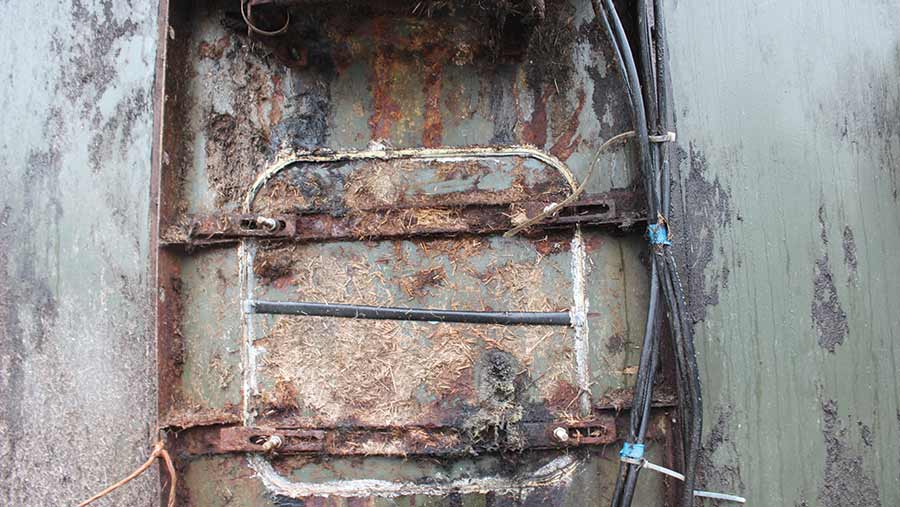 Small doors run the length of the silo

How is it powered?

The loading bed is PTO driven but everything else runs from a 14hp electric motor via a three-phase supply, with the electric box on the side of the silo housing all of the controls.

Can it take any crop?

We use it predominately for grass silage but have put maize silage in a few times. The magic figure is 35% dry matter – having the material too dry in hotter climates can cause the silo to catch fire, so you have to be a bit careful.

The ideal type of material is haylage, a mixture between grass silage and hay. If the material is too wet, excess effluent will be produced, which rots the silage at the bottom.

Have you had any major breakdowns?

The A-frame needed replacing about 20 years ago and we bought the Gehl 99 blower to replace an ageing Vicon Hiflow, which had served us well since we installed the tower.

The loading bed probably takes the most maintenance. There are various grease points, with an indexing clutch used to walk the trailer floor towards the end beaters.

We have replaced this clutch about four times over the years as they have a life expectancy of about a decade. I only have one spare so if anyone has one knocking around, I’d be very interested.

Other than that, it’s fairly low maintenance. However, KAM Engineering in Trowbridge, Wiltshire, can source or make any parts should the worst happen.

Surely a clamp would be easier and quicker?

Possibly, but the silo doesn’t owe us anything, it’s cleaner than a clamp and takes up much less room.

A few farmers in the area have taken their silos down in favour of faster silaging and using contractors. We use our own Tarrup 622 trailed forager, rather than hiring a contractor, so we can adjust the harvesting speed to fit in with the silo filling. It is a lot slower, so we still run a couple of 5t trailers to make sure we don’t overload the bay.

The wastage you get from the silo compared with a clamp is minimal as the dropped bits and loose material aren’t trampled and turned into mush by a loader. Everything that goes in the silo has to exit onto the bed for the cows to munch.

When they’re feeding in the winter, we can also leave the silo to continue out loading and slip away to get on with other jobs. With a clamp, it’s much more labour intensive.

Using the silo means we don’t have to own a telehandler, either. We have a 2010 Fendt 211 Vario with a front loader that comfortably handles the loading duties around the farm. Once the silo finally goes, I imagine we will need to invest in a dedicated loader as there will be a lot more clamp work.

Will it go on for another 43 years?

I’d like to think so, but in reality we will probably outgrow it before it fails on us. Farming is moving on and getting bigger and the silo does limit the size of trailers we use and harvesting speed we can achieve.

Weather windows in the South West are becoming catchier so we have to push on when the weather allows.

I reckon it could comfortably do another 15-20 years, but by that time the structure would be on its last legs. It doesn’t owe us a penny and has low running costs with just a bit of electric so, while it still works, we will stick with it.