Sprays and Sprayers – the annual event where all that is new in sprayer technology is revealed for the industry to see and assess. Andy Collings reports

Househam’s self-propelled AR3500 sprayer will be demonstrated for the first time. It’s a development of its 3,000-litre sprayer, says the company, and the extra 500 litres have been accommodated without increasing the unladen weight by any significant amount. The new version is fitted with 36m booms and the Fieldmaster GPS auto section control system.

Vicon will launch a new range of iXtrack high-spec trailed sprayers which are designed to offer growers an alternative to self-propelled machines. They are available in 2,800 to 5,000-litre builds, with boom widths from 20m to 45m in both steel and aluminium versions.

IsoMatch Tellus controls and IsoBoom guide are fitted and the sprayers are Isobus ready. The valve panel layout has been modelled on the one used by Vicon’s iXter mounted sprayer range.

The latest SS 2400 self-propelled Lite-Trac sprayer comes with a 6600 litre tank and 40m booms. To demonstrate its demount capability, a second machine is fitted with an 8cu m KRM Bredal fertiliser/lime spreader.

A third SS2400, equipped with a 550-litre tank and 36m booms and set up to handle liquid suspension fertiliser, will be in action in the ring. This machine is equipped with a TopCon variable-rate system

Tecnoma’s Intelligent Localised Spray (ILS) system puts spot spraying back in the frame. Images produced by a camera fitted to the front of the tractor or self-propelled sprayer are analysed by a computer to identify the weeds in a crop.

With the infestation map calculated, the computer communicates with the spray controller and, just as the spray bar passes over the affected area, a solenoid valve opens and spray is delivered, closing again when the area has been passed.

Landquip’s new CV self-propelled sprayer will be available in 24/30, 24/32 or 24/36m widths with a new extruded aluminium boom design that is said to give strength and rigidity while weighing just 680kgs for a 36m build.

Sprayer features include multi-head nozzle bodies which can also accommodate the Agroco Umbrella liquid fertiliser nozzles. The boom lattice enables this nozzle to remain in the turret when other nozzles need to be used.

Farmgem is set to introduce a new vertical folding boom to its range. Fitted to the company’s FSV tractor-mounted 1200/1500-litre Slimline sprayers, the new nine-section 24m boom can fold hydraulically to operate at 12m, 18m, and 24m widths.

The boom is constructed from steel and uses reinforced hinges plus plentiful bearings and bushes. All the nozzles are carried on stainless steel spray lines concealed within the boom structure.

Altek’s DC version of the Multi-Spray nozzle body allows individual nozzle switching for up to four nozzles per nozzle body. The nozzle body is linked to software which provides direct control of individual nozzles and allows permutations of nozzles to be used to provide a required flow rate. This system can then be controlled by a GPS map to record where a field has been sprayed and switches the nozzles on or off as a result. 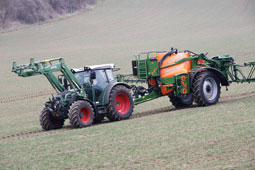 A master cylinder placed between the pivoting, lower link mounted cross-shaft and the drawbar is connected hydraulically to the fixed right and left slave cylinders which angle the wheels of the sprayer and provide steering.

If required the steering can be overridden using a double acting spool valve on the tractor. An indicator scale allows the operator to see the angle of steering and, for road work, can centre it or, if working across slopes, correct the degree of drift by making the appropriate steering adjustment. 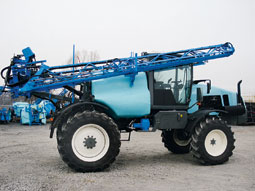 Berthoud’s Raptor 2540 self-propelled sprayer has a 2500 litre capacity and boom options from 24m to 28m. Power is provided by a 180hp Deutz engine which drives through a hydrostatic transmission producing a top speed of 40kph.

Automatic drive mode is designed to provide a smooth ride on the road and the Hydropilot mode can be used to select a constant forward speed when spraying.

Making its Sprays and Sprayers’ debut appearance is the latest version of John Deere’s 5430i self-propelled sprayer which has now been given some improvements, principally in the boom department.

These include a control system called Boom Charge which automatically increases pressure in the spraying system to ensure that when the sprayer is switched on and accelerates away from the headland, it is applying the required application rate.

Other changes include a new boom centre frame and suspension which incorporates a revised geometry for the boom folding cylinders, hinge points and anti-yaw system. There is also new software for the BoomTrac automatic boom levelling and height control system.

An improved version of Micron Sprayer’s Varidome band sprayer complete with, for the first time, an electronic controller to adjust rate and flow, will be presented to visitors at this year’s event.

The shielded, low volume inter-row CDA sprayer has been designed to safely treat weeds between rows of vegetable plants and can spray inter-row widths from 200mm to 800mm and bed widths from 1.3m to 2m. Multi-bed units to meet individual requirements are available and the tool bar build can be adapted to cope with different crop types.

Chafer’s Guardian and Sentry sprayers now come with 4,000-litre tanks and boom widths bigger than 24m, reports the company. They are now fitted with heavy duty axles to cope with the larger tanks and higher forward speeds and air brakes are now available as a retrofit. There is also a new axle lock system to improve safe road travel.

Other changes include in-cab calibration of tracking axle system and a new high-volume 75mm plumbing system which has been designed for sprayers with wide booms and applying liquid fertiliser.

The latest range of sprayers from Agrifac includes the top-of-the-range Condor self-propelled model which can now be specified with 3,000, 4,000 or 5,400-litre tanks and boom widths up to 51m.

Air suspension, track width adjustment, four wheel steering and equal weight loading are included in the specification. The company’s GreenFlowPlus circulation system, which helps to prevent sedimentation, is now standard. It also has the ability to completely empty the tank during spraying. 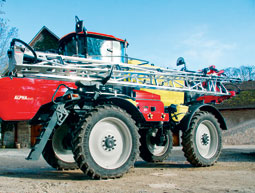 Hardi’s Alpha Evo self-propelled sprayer has a new cab with climate control and a SprayCenter console along with the HC 9500 touch screen Isobus controller. Providing a wide viewing range – almost 360deg, says Hardi – the new cab includes a passenger seat and is claimed to have low noise levels.

The control layout sees the SprayCenter console positioned to the right of the operator. The HC 9500 allows field mapping, boom section and boom height management plus items such as autowash, autofill and autoagitation.

The new-look Agribuggy with its curvaceous cab makes its debut appearance at the Sprays and Sprayers event. Powered by a 132hp, 2.8 litre engine driving through a four-speed automatic transmission, the vehicle is fitted with a demountable 2500 litre GRP tank and 24m aluminium booms.