Highlights included a twin-braked roller and a yard scraper built from an old Challenger track.

He had two priorities: making it easy to transport on the road and fitting a braking system for the steep ground that he works on. 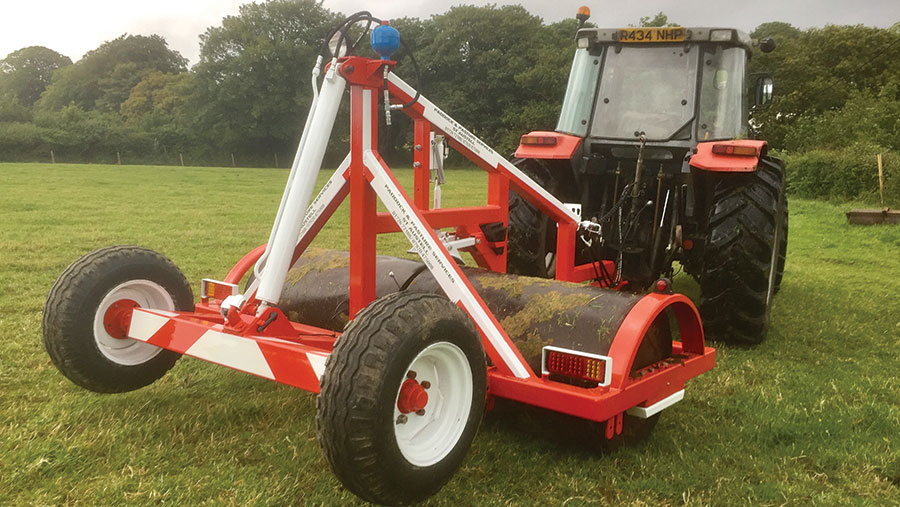 The end result is a marriage of recycled parts, including an 2.4m-wide, 760mm-diameter Grays roller that was on sale as spares or repairs for just £150.

He patched up the leaking drums and also made use of the main shaft – to which he added greaseable support bearings – and strengthening hoops.

Elsewhere, the wheels, axle and lift ram were upcycled from a Browns small bale transporter and the gas accumulator came from a JCB 806.

To manage the challenge of steep ground, Mr Phizacklea added a braking kit to the split drums, which plugs into the tractor’s system.

They use a whippletree linkage – a crossbar that joins them together and pivots in the middle – to make sure they apply the same pressure.

And to reduce the stresses of road transport, he added a gas accumulator and Land Rover suspension bump stops

The main frame provides 40cm of clearance, or 30cm when fitted with a hydraulically operated finger harrow.

He also has a 50mm ball hitch and electrical socket at the back, allowing him to travel to jobs with two implements in tow.

Next winter, he plans to build an air seeder to overseed grassland using the harrow.

He is also looking to upgrade the roller from a 75cm to 90cm diameter, which will allow him to work a bit quicker. The original 75cm drum will be repurposed to carry slitting tines.

The tool was conceived to improve the success rate of reseeds, which involve grazing the pastures down hard, aerating two or three times, spinning on the seed and then flat-rolling to conserve moisture. 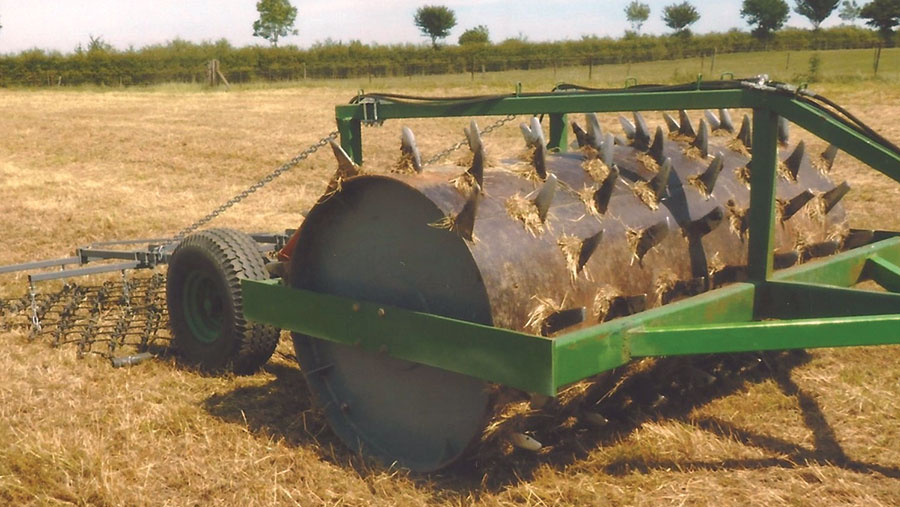 At its heart, there is a roller formed from 1.2m-diameter water pipe with old power harrow tines welded on to form the spikes.

Mr Lord cut the pipe to length with a gas torch and after carefully marking out the spike locations, welded them all on by hand.

The frame incorporates a set of transport wheels, and a pair of hydraulic rams allow the roller to be lifted clear of the ground.

A set of chain harrows was added last year to save doing another separate operation. Apart from a few hydraulic fittings, it was made using recycled metal.

Mr Lord is also an accomplished wood carver and has recently completed a 1.8m-long oak plaque depicting the farming year.

The key component is an old Challenger track, which he cut to size with a petrol circular saw and fitted to a folding metal frame.

This has a single hydraulic ram in the centre so the wings float as the driver makes their way down a passage or along a wall. 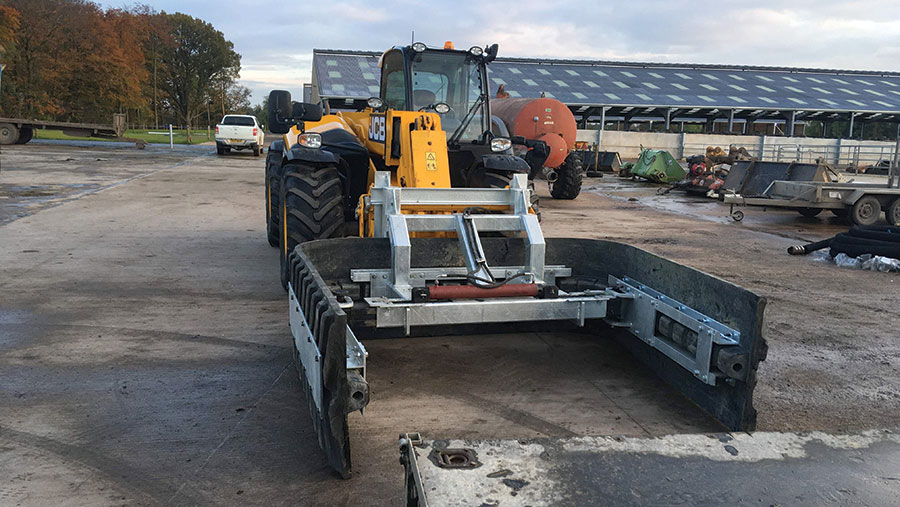 Mr James built the tool for scraping out pig sheds at his farm near Newtown, Wales, and it means he can cover five times the area he did with his previous fixed unit.

The build took him about a week and one of the trickiest jobs was drilling holes in the tracks for the frame to bolt through.

This is because there was so much steel wire inside that he had to abandon conventional bits and use a hole saw instead.

Due to the weight of the track unit, he had to build the frame out of fairly hefty steel and that means the finished unit weighs about 1.5t.

However, he has been using the machine daily for the past two years, and there is no discernible wear on the track unit or any damage to the frame.

Since then, he has made and sold three to other farmers and he charges £3,000 for them.

To speed up the task of gathering lay-flat slurry pipes, County Armagh dairy farmer and contractor Niall Murphy built a hydraulic pipe reeler to fit on the front of his JCB telehandler.

The pipes in question are used to transfer slurry from tanks under slatted floors to an external store during the closed period for spreading. 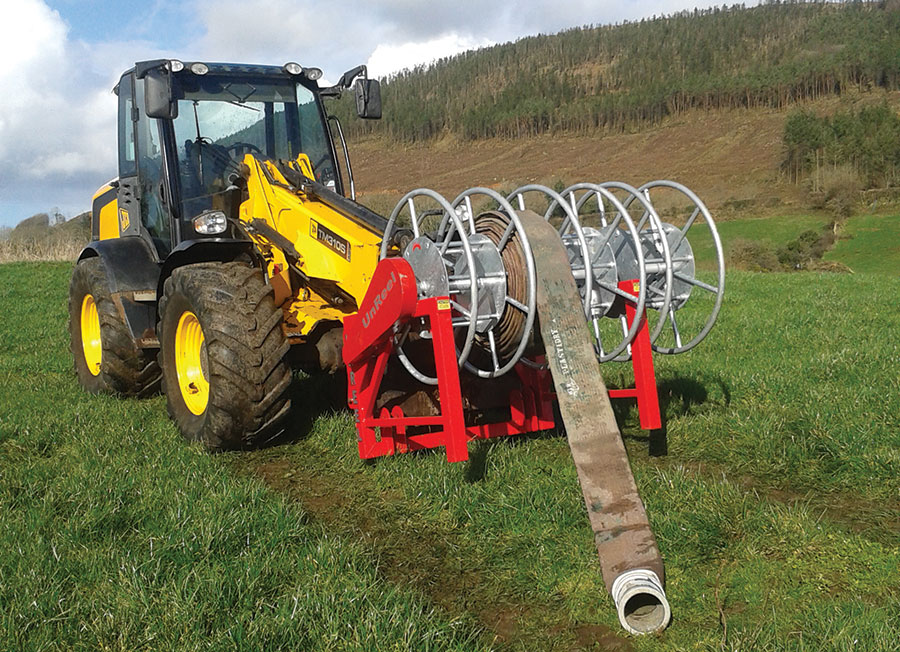 The reeler has three main sections for rolling up pipe, which can accommodate lengths up to 40m – although most of Mr Murphy’s are 25m.

He also fitted a fourth section on the left with a removable side. This can be used for gathering up barbed wire or for winding up borrowed pipe before it’s returned.

An added benefit of fitting the reeler to a telehandler is that it can be raised, allowing slurry to run out more quickly during rolling.

The outfit is powered by a hydraulic motor plumbed into the handler and it has a chain drive to the reel with a 4:1 speed reduction.

Mr Murphy built the reeler as part of an A-level project and it cost £970 in materials.

He did all the work himself, apart from getting an engineering firm to bend the pipework and sending the reel to be galvanised.

He mounted them across four box-section rows and used chain strainers attached to a turnbuckle to hold things tight. 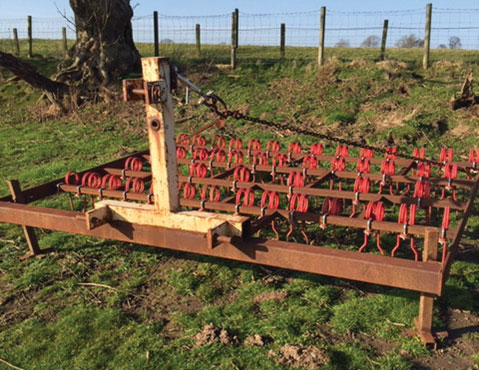 Negotiating narrow gateways was becoming a rather large issue for the Krone bogey-style header trolley used by Jamie Margetts.

So when it came to buying a new header last year, he opted not to buy the same style trolley to go with it, but head to the workshop to concoct a fit-for-purpose unit.

The need for something more manoeuvrable was reinforced last summer after taking more than an hour to get the 6.2m header into a small gateway and needing a telehandler to lift the rear of the trailer around.

Some of the fields the contracting firm enters have 4.5m entrances from single-track roads around their base near Stockland in Devon. 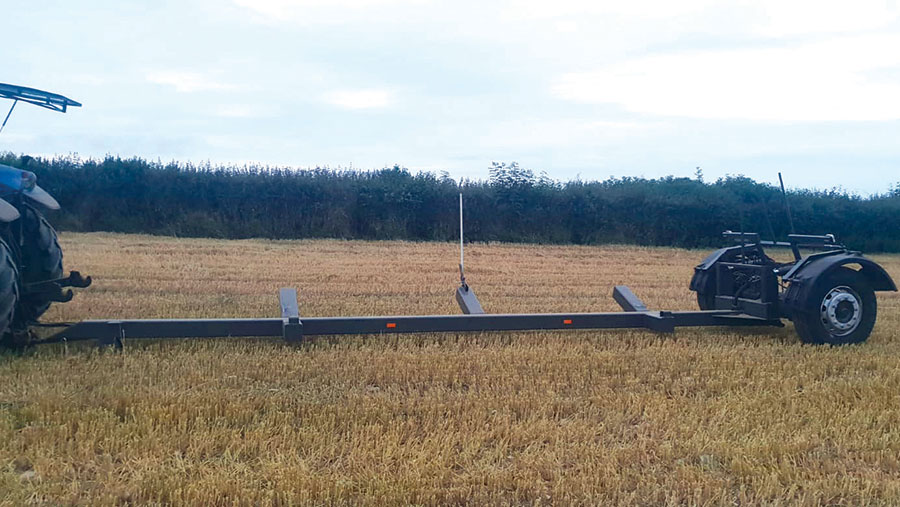 The build took plenty of hours and head scratching. At the rear is a commercial lorry axle that has been converted from air to hydraulic brakes.

Mr Margetts then installed a hydraulic steering ram that is operated from the tractor’s spool and helps swing the back of the trailer into tight entrances.

To keep it safe on the road, a 30mm pin stops the ram from operating when in transport.

The new trailer also has a lift-and-lower option, as there are plenty of humps when getting into fields.

The unit actually sits 150mm higher than the Krone trailer when on the road, but can be lowered onto the floor to make it easier for the forager to hook on.

The build cost about £5,000, but is totally bespoke and is exactly what the firm wanted. Amazingly, it still saved a few quid on the £7,000 asking price of a new Krone unit.