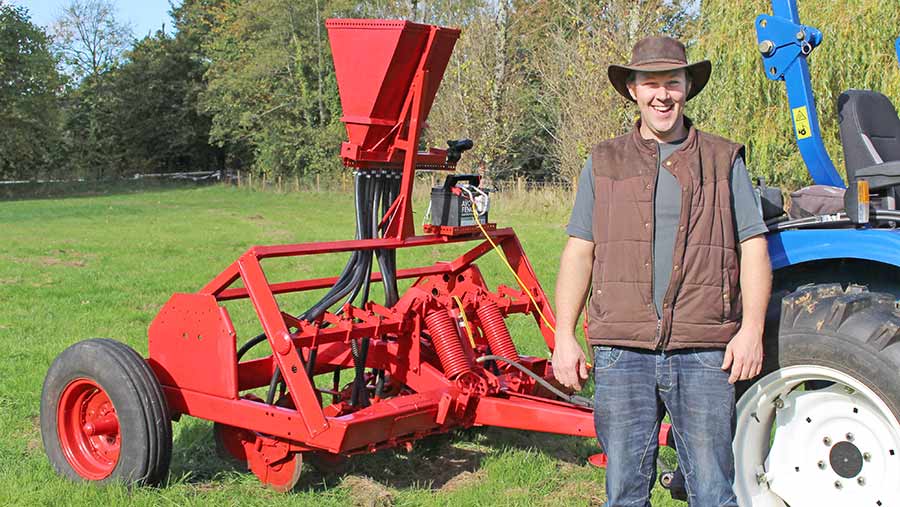 After 10 years working as a farm adviser, Richard Warren decided that he’d had enough of wearing suits, negotiating red tape and attending meetings and wanted a more hands-on approach to life, with the ultimate aim to be in charge of his own farm in Dorset.

Not being from a farming family meant he’d have to do it the hard way and part of that meant some resourceful workshop inventing to minimise machinery outlay.

One of his neatest creations is a grassland drill, which he uses on his 14ha of leased land in Frampton, just outside Dorchester. Here, he explains how he did it.

Why build a drill?

As a smallholder, every penny is accounted for so blowing £20,000 on a second-hand direct drill wasn’t an option.

The land we look after was riddled with couch, Yorkshire fog and other low-value ag grasses, and the areas were generally very tired and unmanaged.

This was useless to our animals and the biodiversity.

We’d put sheep on there to fatten up and, although they ate the lot, they didn’t grow much so we ended up feeding substantial amounts of concentrate to reach a decent store weight.

I wanted to turn these areas into profitable land, from which we could make premium quality mini round haylage bales, graze our dairy cross beef calves and help out the local insect community with field flowers.

It was also important for us not to rely on a contractor. 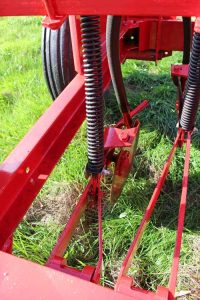 To make it usable I had to be able to tow it on the road and fit through 3m gateways requiring 90deg access turns from the road.

I’ve used the same coulter arms but changed the way the seed drops into the terrace as the old-style boot opened a wide slot that I couldn’t close.

Instead, I made a pinched tube and scraper, which works much better.

I have also added my own seed hopper and metering unit as the original MF one wasn’t suited to small grass seeds.

How did you do it?

The first job was to cut a meter out of each side of the drill.

It sounds simple enough, but involved a number of trolley jacks when welding back together to make sure it was square.

I now run 10 coulters spaced closer together, down from 15 on the original 4m drill.

The discs were in awful shape when I got the drill, so I spent over four hours sharpening them with a fine stone on a bench grinder.

They cut through matted grass with ease now and have stayed sharp so far. 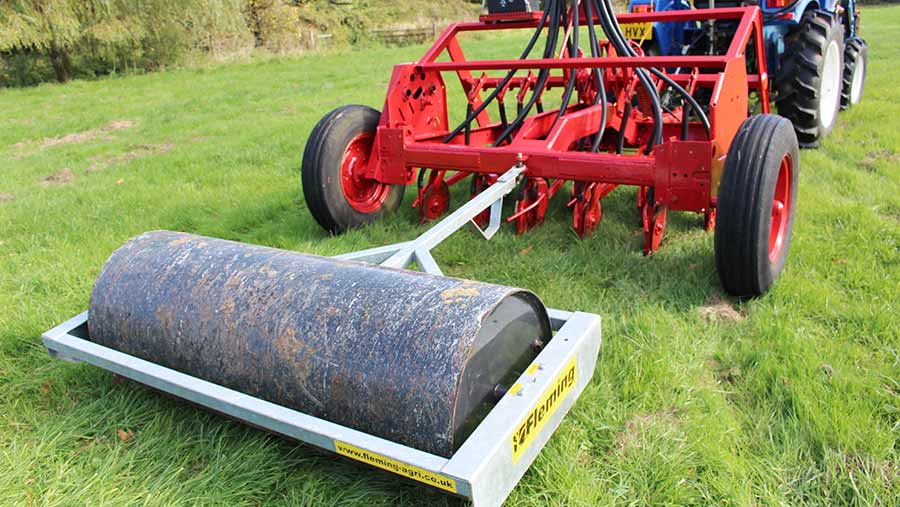 I bought a set of 20mm weld-on gate hinges from the local country store and attached them to the rear of the drill so that I can pull my 1t water-filled roller behind to close the slot made by the angled discs.

The MF 30 design was ahead of its time, with every coulter independent to follow undulating ground. 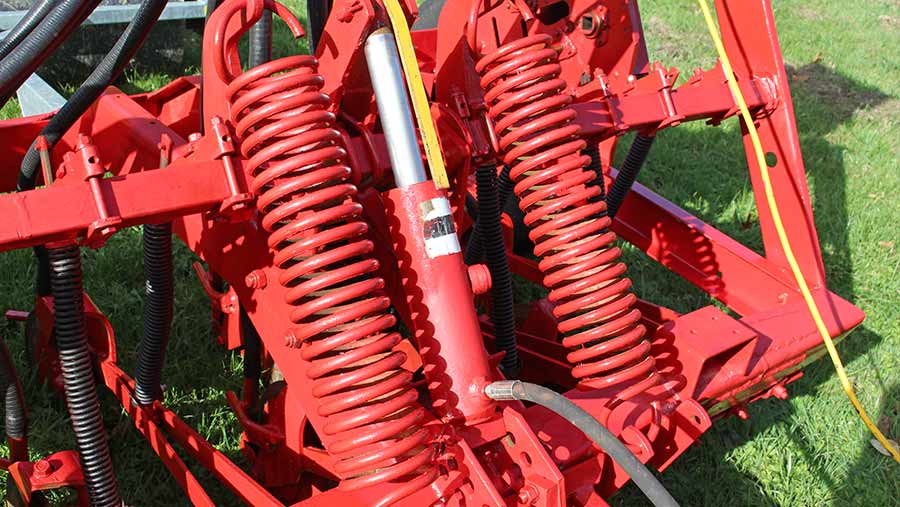 Depth and pressure is altered on the original single ram, which had to be repaired as the ram seals were dead. The hose needed replacing too.

Power is provided by a 12v deep-cycle electric fence battery, with crocodile clips to attach the wires and a bungee cord to hold the battery in place.

I have to do a few test digs with a spade before drilling as I have limited pressure control.

I can only drill when the soil is in a semi-plastic state and there’s decent moisture around, as pressure per coulter is a maximum of 25kg. 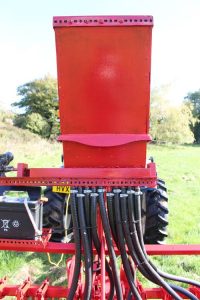 What metering system does it have?

It’s probably the only drill that uses an electric window motor from a Honda HRV car to meter the seed from the hopper.

I had to break the motor apart to establish where earth and constant live were and then fitted a couple of spade terminals before resealing the unit.

A length of old extension cable connects the switch on the tractor to the drill via some cheap junction boxes, with a relay switch on the seeder operating the higher amp demand from the motor.

The original wheel metering system has gone as grass seed is lighter and smaller than cereals.

Gravity is key to help it down the tubes as there is no fan.

The hopper is an extended garden fertiliser/seed spinner, similar to the types you get from B&Q that have 20 holes in the bottom to let the seed through.

However, the plastic bearings weren’t up to the job and have been replaced with mini 2RS bearings recessed into some oak.

I doubled each hole up with some glued together rigid plastic pipe, which gave me one pipe per coulter.

A tray test showed that I’m drilling around 600g/min from each tube, with the rate altered by adjusting my speed.

What did it cost?

The donor Massey Ferguson 30 set me back around £260, and I managed to keep rebuild spending to £500.

That’s until I found out that it might feature in Farmers Weekly – I thought a splash of red paint would help smarten it up, so the total bill came to £532.30.

How has it worked?

It’s been ideal for our little fields and we are really seeing an improvement in the grass quality and livestock growth rates. The place is buzzing with insects, too.

I use Niab Tag-approved seed and a herbal ley overseeding mix from Cotswold Seeds.

Having some agronomy training helps and is ideal for keeping a tab on fertiliser and muck applications.

I tow it behind my 40hp Land Legend. Driving a cab-less Chinese tractor isn’t considered cool, but it does the job for a fraction of the cost and has very few electronics.