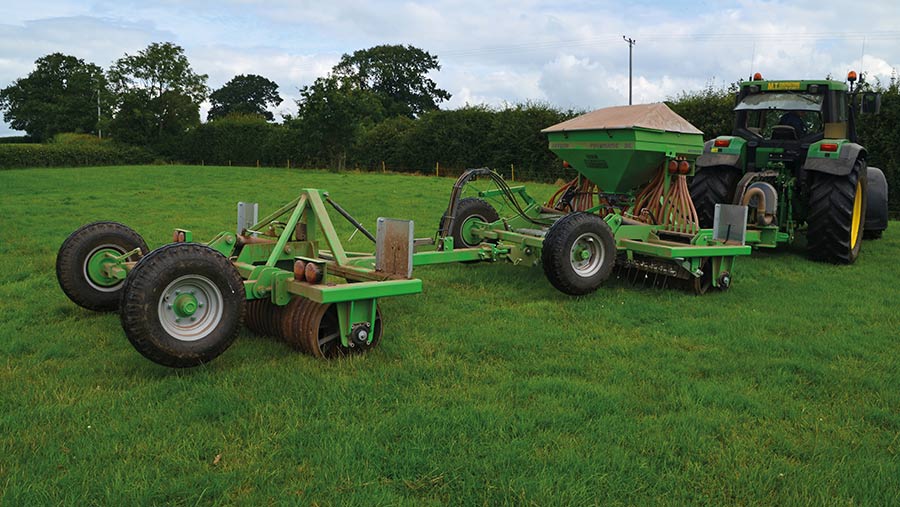 Inspired by a stint working for a New Zealand contracting firm, Marcus Tucker returned home to Devon and built himself a combination roller seeder.

Popular across the Antipodes, these simple machines allow operators to simultaneously sow herbage seed and consolidate the seed-bed.

The farm he worked on used a Duncan Roller Seeder – consisting of a 3m-wide ring roller with a simple box drill – which did a good job of putting the seed in the ground while leaving a weatherproof finish.

Initially, he considered importing one, but the costs were too high, so he decided to build his own instead.

The starting point was a set of Twose Cambridge rolls, which he salvaged the rings from, and a Fiona box drill.

He then built a new 3m trailed frame to carry the rings and he intended to mount the box drill on top of this. However, it proved awkward to incorporate the original land-drive metering wheel.

Instead, he got hold of a pneumatic hopper and metering system from a 40-year-old 4m Accord DL.

This leant itself to the job far more readily and the distribution head gave a larger number of outlets for more complete coverage of his drill’s 3m working width.

Rather than using seed outlets on the end of each pipe, he opted for distribution boxes, as used on the Duncan, which give a more even spread pattern.

The only challenge of using a 4m metering system is that he had to do some serious number-crunching to work out the calibration settings.

As the drill came with a pto-powered fan, he needed to devise an alternative means of driving it. Rather than running a long pto shaft to it, or replacing it with a hydraulic unit, he opted to mount it on a headstock, right next to the tractor.

He then built a neat three-way swivelling hitch and came up with the ingenious idea of piping the air to the fan though the drawbar’s box-section. This avoided the need to have an unsightly air pipe stretching from front to back.

For easy manoeuvring, he fitted a pair of rear transport wheels, with hydraulic rams to lift the drill in and out of work.

Finishing touches included a following harrow made using Kuhn sweeper tines and an additional rear trailed roller to press the seeds in. This also has hydraulic lifting transport wheels.