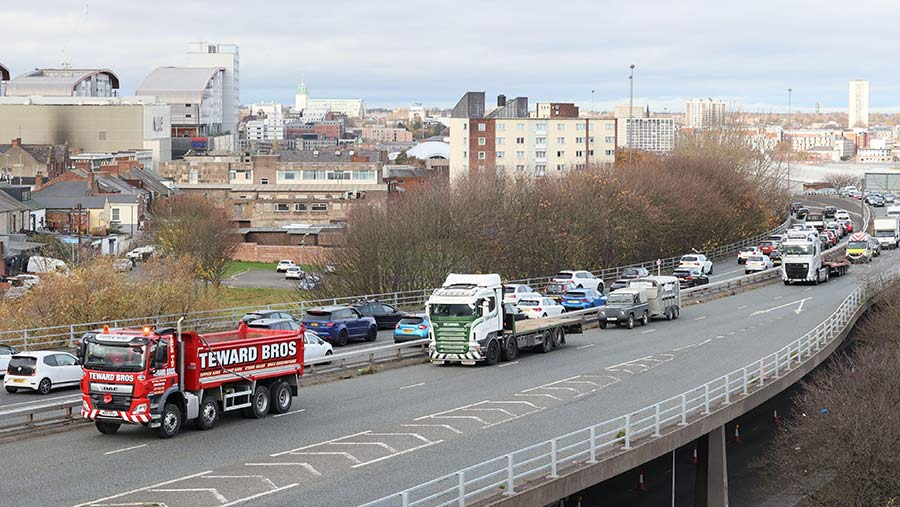 The first in a wave of farmer-led protests over soaring fuel prices brought roads and a city centre to a standstill at the weekend.

The protest in Newcastle upon Tyne on Saturday (20 November) saw farmers and the public join forces to call for government intervention to ease soaring prices.

A slow-moving convoy of tractors, trucks and cars eventually caused a five-mile tailback on the A1 between Gateshead and Newcastle.

The convoy was organised and led by farmer and former haulier Andrew Spence – a veteran of the fuel protests in 2000. Mr Spence said prices had risen to the point where businesses and the wider public were being crippled financially.

“Before the price rises began, my road vehicle took about £70 to fill up. Just a few weeks later, it is £120. No-one can absorb those costs.

“The government must step in, or people’s wages and prices of other goods will have to increase to cope,” he said.

Mr Spence explained that he wanted the government to impose a flexible tax rate to cap fuel prices as they rose. “If the price of fuel rises, the government should cut tax, but if costs go down, the tax could stay in place,” he said.

Mr Spence said the call had struck a chord with the public, allaying his earlier fears that disruption would provoke anger.

“We held up thousands of people and it could have backfired and gone wrong in so many different ways, but the support was staggering,” Mr Spence said. 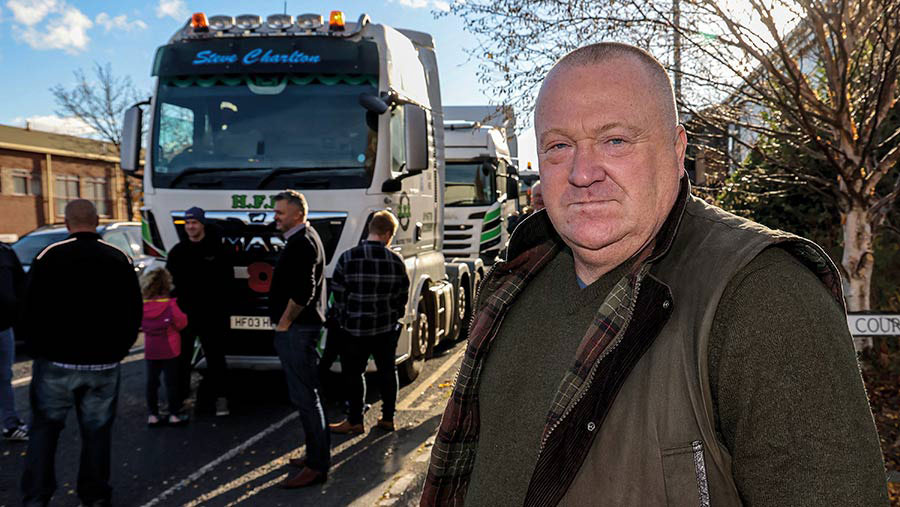 “People turned out to see us; lining the road, hanging out of windows and shouting support from bridges as we drove to the city centre.

“It was like a dream, driving past football fans at St James’s Park and getting cheered was an emotional moment,” he added.

Further protests are being organised across the country including Glasgow, Birmingham, London and Avonmouth.

Mr Spence stressed that all of the action would be peaceful and organised with the guidance and involvement of the police.

“There won’t be any blockades or people gluing themselves to the road. Convoys will move slowly and pass through cities without stopping,” he added.

However, while support has been widespread, Farmers For Action (FFA), which joined the protests 21 years ago, said it would not be taking part this time.

Chairman David Handley said he wished protesters well, but felt there was too big a risk of provoking public anger.

“There is already disruption to trade, and the consumer is bearing the brunt of shortages and rising costs,” Mr Handley said. “If the protests cause further misery, the anger will be directed at us and that’s not good.

“We will face a lot of challenges over the next five years and during these tough times we need the support of our consumers.”

A government spokesman said that fuel prices were a worldwide problem.

The government has provided £4.2bn in support to help with the cost of living, including freezing fuel duty for the 12th year in a row, the spokesperson added.

Irish farmer protests caused disruption in Dublin on Sunday (21 November), during a Save Irish Farming rally.

After a convoy of tractors and farm vehicles shut down the city centre, IFA president Tim Cullinan attacked the Irish government’s farm policy.

Proposals under the National Strategic Plan to implement the new-look CAP are designed to reduce production, Mr Cullinan said.

“We have consistently called for genuine engagement and negotiation with farm organisations to develop a farm-level plan that farmers can work towards achieving.

“To date, nothing has been forthcoming,” he said.

“The reality is that if food is not produced in Ireland, it will be produced in countries with a higher carbon footprint such as Brazil, where it was reported this week that 13,235sq km of rainforest were cleared in 2020-21.

“Farming is a business activity, and farmers will not stay at it unless they can make a profit and make a living for their families,” Mr Cullinan added.