Hayling Island farmer Simon Walter has come up with the perfect system for transforming his tough clay land into a fluffy seed-bed in just one pass.

His home-brewed cultivator uses seven medium-working and two deep-ripping legs to tear through the soil before an Amazone power-harrow – salvaged from the stinging nettles – stirs in the straw and leaves a flat, fine-tilthed top layer ready for seeding.

The heavy land might be well-suited to wheat growing, but the knock-on effect of the bumper yields is a shedload of straw spread across the stubble post-harvest.

With Mr Walter keen to incorporate as much as he can back into the soil, he set about finding a machine that could do the job.

The previous tool of choice was a combination of subsoiler legs and discs on a Cousins-built cultivator, but it struggled to deal with the sheer quantity of trash and frequently left vast amounts of straw on the surface.

Fields also get a generous layer of compost – the farm produces about 5,000t/year – that puts even more pressure on the primary cultivators to do a decent job of mixing the extra organic matter deep into the soil profile.

He found the answer in a few pieces of recycled steel and an old power harrow.

Granted, the new cultivator takes some pulling, but yields are gradually improving and Mr Walter reckons heaving up the subsoil on an annual basis benefits his tough clay and gives crops a better chance of rooting down early in the season.

The idea was to manufacture something that could be ripped through the ground at pace to get a thorough mix of straw and soil.

The only way to achieve that was to knock together something narrow and fast, and that could withstand the strain of 8kph travel speeds and zero draft adjustment.

A rock-solid mainframe was imperative. It came from a previous home-build that used 8mm thick, 150mm box-section steel to create a rigid central structure.

A selection of laser-cut triangular and L-shaped gussets made of 20mm plate were ordered to provide an extra level of rigidity and support to the nine legs.

At £420 they were one of the more expensive parts of the build, but saved a lot of workshop man-hours in the process.

Seven of the legs are set to work at 200mm deep, while the two running directly behind the tractor wheels dig down to 350mm to remove any added compaction.

The outermost wing on each side has been replaced by worn-out metal that protects the bolt holes and minimises the movement of soil outside the width of the machine.

Given the rapid forward speed, work rates can reach north of 2ha/hour.

However, traction becomes a serious problem when the surface is slimy and, during wet summers such as that of 2015, can really push back drilling dates.

One of the reasons for piggybacking a pto-powered implement to the subsoiler was to get the most out of the farm’s firepower.

As with most of the new tractors on the market, New Holland’s are fitted with a tuning box that allows an injection of extra power during transport and pto work.

The T7s offer a bigger dollop of boosted power than most – rated power is 215hp, yet that can be bumped up to 260hp for some tasks.

Obviously it uses a bit more fuel to get there, but it also means Mr Walter can get far more from his tractor than he would during standard tillage tasks.

The original plan was to fit an old rotavator to the back, as its direction of motion would help propel the rig forwards. 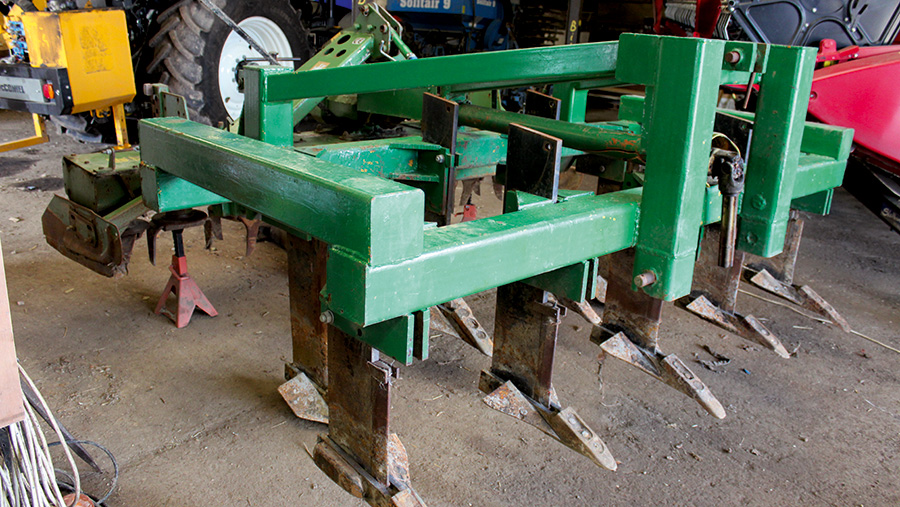 However, finding a reasonably priced second-hand model with a reliable source of spare parts proved problematic.

Instead, Mr Walter and farm foreman Steve Adams fished out an old heavy-duty Amazone KG302 power-harrow and mounted it to the mainframe by a simple three-point linkage.

Power is directed from the tractor via a stubby pto shaft to a 50mm shaft that runs the length of the subsoiler.

A fair number of the components were pinched from other machines lying around the yard, including the shafts, top links and turnbuckles.

The latter fit between the linkage and framework and allow the working depth of the power harrow to be adjusted as the tines begin to wear out.

The cultivator has been back in the workshop this winter. 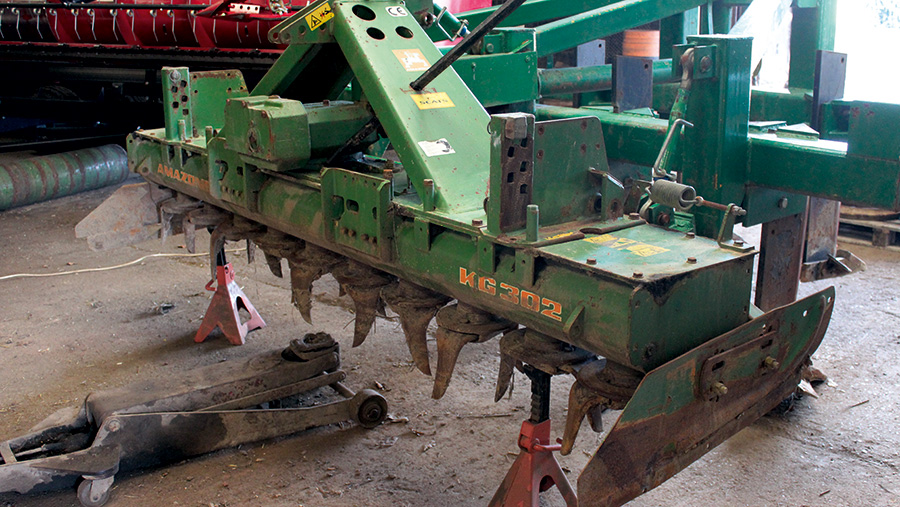 Mr Walter plans to fit the new roller directly to the subsoiler frame to ensure the legs cannot stray from their 200mm working depth and to simplify the depth adjustment between the cultivator and power-harrow.

The aim is to keep seed-beds consistent and level.

Mr Walter argues that, although it might be a fuel-hungry job, minimal build costs and near-zero depreciation makes his new system a cost effective form of cultivation and drilling on his heavy clay soils.