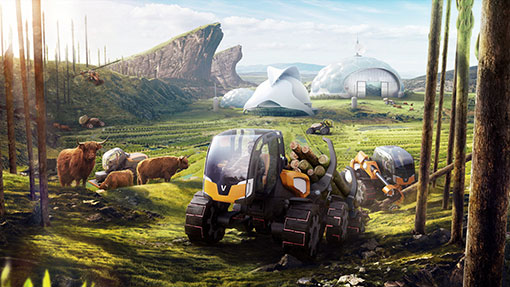 What will tractors and other farm machinery look like in 2050? David Cousins has a not-too-serious guess at what we all might be using in the future.

It was a bright cold day in April 2050 and the clocks were striking 13.00. Walter Smith pulled his fur hat close and headed out to the machinery barn. As he sniffed the morning air, a drone the size of a sparrow buzzed over him briefly then shot off to the west.

Normally he would have been annoyed that it had come so close. Almost all organisations and individuals routinely used drones now, whether it was for checking crops, spotting intruders or ensuring that farmers weren’t lighting bonfires or spraying when it was too windy. They weren’t supposed to come closer than 15m to buildings and people, though.

But this was a special day, one that he had been looking forward to for the past two years. Amazon Farm Supply, which had taken over most UK farm dealerships, had airlifted his new tractor in the night. As he slid open the doors, he savoured that keen sense of anticipation and excitement that every farmer has when a new machine comes.

“Welcome to your new John Holland 23X – the tractor that helps feeds the world,” chirped a friendly voice that was almost human but not quite. However, Walter noticed a trace of sarcasm and made a mental note to get the foreman to adjust the voice unit.

As he neared the tractor, the engine automatically started with a cough and a rattle. Puffs of black smoke spurted out of the engine compartment and a strong smell of diesel pervaded the whole area.

A wry smile creased the corners of his mouth. He loved this humorous throw-back to a previous era. The last tractor powered by diesel had been banned 20 years ago when scientists finally gave up trying to remove all the nitrous oxides and particulates coming out of what used to be called the “exhaust pipe”.

But even farmers in their 30s still opted for the Nostalgia Pack, which included a fake exhaust pipe, clouds of harmless (but surprisingly convincing) smoke, rattling dashboards and pre-powershift grating gearboxes.

He remembered, too, how farmers used to spend a lot of time and money putting diesel into their tractors. They always had a big plastic tank full of it at the farm and used to moan about how expensive it was. There was also a shadowy organisation called HMRC, which spent its time peering into farmers’ fuel tanks.

Of course, the 20 or so tractor companies that used to exist a century ago couldn’t really have all expected to continue to stay in business, he mused. No one was very surprised when John Deere and New Holland decided that, for reasons of economies of scale, the best thing was to combine their two companies into one huge organisation.

It was all about fuel, of course. In the early part of the 21st century scientists and engineers were convinced that the Middle East would continue to provide the bulk of the developed world’s oil and that the balance would come from what used to be called “fracking”.

But when it became clear that the constant fighting in that part of the world made it just too unstable to provide a reliable flow of crude oil, and that fracking was too damaging to the environment, governments looked around with some degree of panic for new sources of fuel.

In the end it was a technology from the previous century that came up trumps. Fuel cells (which pass hydrogen over one electrode and oxygen over the other to produce electricity) had been tried in the 1950s by Allis Chalmers and then again by New Holland in the early part of the 21st century.

But it was only when red diesel reached £5/litre that manufacturers threw their energies into perfecting the technology.

Now every barn roof in the western world was covered with photovoltaic cells, producing untold gigabytes of power to split water into hydrogen and oxygen. Solar cell technology had improved vastly, too, with a panel life of at least 200 years.

Back in the barn, Walter was settling into his new tractor. Sensors noted his weight, height, arm and leg length and moved the controls into perfect position. This was the mid-sized model in the John Holland range, with a width of 25m and a length of just 3m.

It was a pain to park, even with a full set of anti-collision sensors, but the huge working width made those old-style tractors seem like a motorised wheelbarrow.

It took machinery manufacturers – and farmers – a long time to get to grip with this new style of prime mover, of course. Everyone was used to the big-wheels-at-the-back, small-wheels-at-the-front format.

But as the second decade of the 21st century dawned, it was becoming increasingly obvious that soil compaction was now the main limitation to yields. The huge machines of the past covered a lot of ground but exacted a high price in terms of damage to the soil.

With big tractors in that era routinely weighing more than 10t and a combine harvester with a full tank putting 60t on to the ground, it was a technology that had reached its limits. But what to replace it with?

As so often is the way, old and forgotten technologies can find a new home in a high-tech world. In this case it was a 1970s farm-built gantry system that ran on the same wheelings each year to minimise soil compaction.

It was the ultimate controlled traffic farming system but had been largely forgotten about. That all changed in 2031-32, the so-called ‘wettest years in living memory’, when it rained on and off for virtually 18 months and conventional machines were unable to get on the land.

Using wheelings set at 25m, cultivation, drilling, spraying, fertiliser application and harvesting were all done on the same tracked gantries. Getting grain off the field was the trickiest bit, and it was only an unusual form of magnetic levitation (first used for trains in the latter part of the 20th century) that made it possible.

None of this would have been possible in the earlier part of the century, simply because the logistics of getting vast amounts of crop on and off small farms wouldn’t have been feasible. But as farmer numbers continued to drop through the early part of the 21st century, it was found that 1,000 or so “superfarms” were able to provide about 80% of all the arable crops.

The increasing instability of the jetstream was still a worry, with predictions from scientists in the early years of the 21st century turning out to be all too true.

For some farmers in the western side of the UK, the only answer was a series of giant polytunnels covering 20 acres at a time and channelling rain into huge reservoirs for use in dry periods.

By 2030, driverless tractors were widely used for cultivation duties on the flatlands of East Anglia. However for most other tasks it still made sense for a human being to keep an eye on things.

Equally, small, sophisticated robots had taken over the work on many high-value veg crops. But in most cases it was still more effective to use manpower to direct broad-acre tasks.

On livestock farms, it was a very different situation. After decades of manual labour, by 2050 all cows were milked by robot and most were also fed by robot, too.

Muck-scraping duties, never anyone’s favourite, were almost wholly carried out by robots, as was the washing down of equipment and floors. Monitoring technology had improved considerably, too, with all animals automatically checked for weight, health and feed intake.

Increased mechanisation may not be the answer to everything, but for farming in 2050 it is managing – just – to produce enough food for the population.

Will there always be a need for farmers? Walter chuckles: “Someone’s got to switch the bloody thing on.”