Scott Lawrie’s battle for poultry shed cleaning perfection has morphed his fledgling business into a fine-tuned, 16-man cleaning squad at the very top of its game. 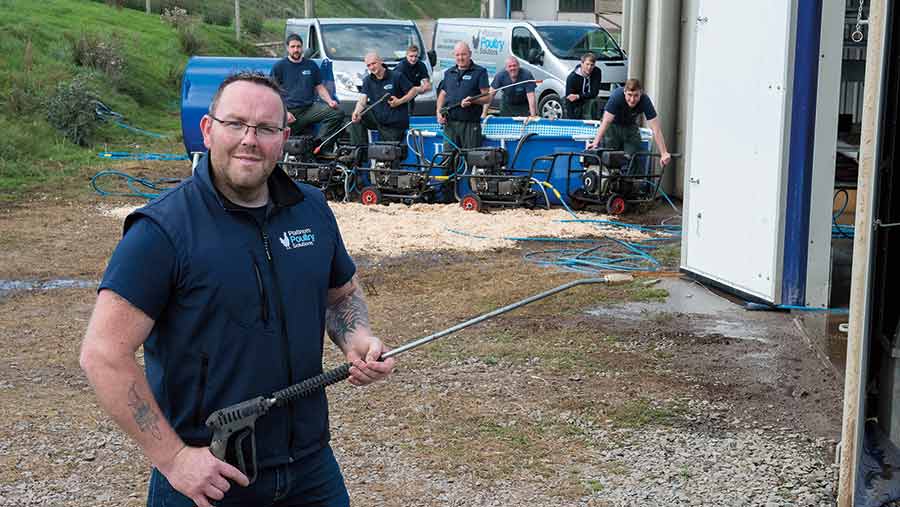 From his humble beginning on a Fife council estate, Scott could never have imagined he would be running one of the country’s leading poultry house washing operations.

At the time, legislation was coming into play that demanded lower stocking densities for egg-producing birds. It saw many of the big players switch to multi-tier systems to allow more birds to be housed within a given floor space.

For many it meant either going big or going bust, but Scott saw it as the perfect opportunity to establish a professional cleaning operation for the more complicated shed layouts.

Efficiency is the name of the game when it comes to hen house cleaning and Scott’s army-like planning has halved the average two-week clean-out.

That means Platinum Poultry can move on to the next job and the hen house gets an extra week’s laying time.

To make the process as pain-free as possible, the client is given a pre-clean pack that dictates everything the team expects when it turns up on the day so it can be up and running within an hour of reaching the site.

The company is based in Fife and Lothian and has offices in Edinburgh, but is now a national business that operates between York and the Black Isle of Scotland, north of Inverness.

For Scott and his 16-strong team it means a lot of travelling, so to make the process as enjoyable as possible, the team stays in holiday cottages with all expenses paid by the company. Weekly nights out and a quarterly bonus scheme keeps morale and motivation high, too.

Diesel-powered pressure washers are key to the job and were previously fed by water hauled in bowsers, but the tankers have now been traded for £72-a-piece pop-up swimming pools that simplify the transport process.

Scott has also designed and manufactured his own digger-mounted auger system for pulling muck from underneath multi-tier systems.

He hires the kit out, as well as a range of disinfectant products for the treatment of red mite.

Return bookings are put in the diary once the post-job cleaning reports have been delivered and the company is fully booked until November 2017, with some hen houses signing up two flocks in advance.

Scott places a lot of importance on client relationships. He aims to have bi-monthly chats to see how the birds are getting on and also heads the Scottish avian influenza awareness group, which means he can send alerts to his customers if there are any risks to flock health in the UK.

Alongside the regular chicken house work, Scott has established sideline operations that include clearing up after the Royal Highland Show and at the United Auctions cattle markets.

Solar panel cleaning also keeps the team busy during biosecurity break days and makes use of the kit already carried round in the vans.

“The way Scott has developed his business and the relationship he has built with his loyal team and customer base is a credit to his hard work, thorough approach, excellent planning skills and rigorous attention to detail.”