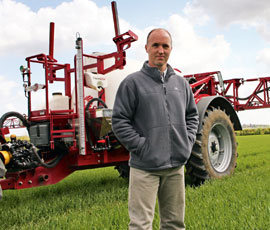 The decision to take on the first production models of a new machine is not one that many farmers take lightly. But it didn’t put off farm manager Stewart Watt, who took delivery of a FarmGem Gem-Trak 4200 trailed sprayer several months before it was officially launched at this year’s LAMMA event.

“I was looking for a sprayer which had ample capacity to make sense of liquid fertiliser applications and also do a good job when applying pesticides at low application rates,” he explains. “And rather than a self-propelled machine we wanted a trailed sprayer which would allow our budget to also purchase a tractor which could be used for other operations.”

So, why the FarmGem sprayer? “We were running a 28m trailed Hardi sprayer which did a fair job but we found it difficult to maintain when Hardi moved its spares headquarters to France,” he says. “I was, of course, aware of Gem’s earlier sprayers and what seems to be a reasonable demand for them as second-hand machines, so I opted for a FarmGem in the hope that the new machines were of similar build quality.”

Mr Watt also says that the decision to change to the Hungarian-made FarmGem coincided with a push to reduce his reliance on liquid fertiliser and use granular instead.

“I realised that if the sprayer was being used for liquid fertiliser we couldn’t be using it to apply pesticides when and where we needed to,” he explains. “This way I can have one man on the spreader and another on the sprayer.”

It was a move which also resulted in him specifying the sprayer with a 24m boom to better accommodate the spread width capability of his Amazone spreader.

The new sprayer has lorry-type air bag suspension and a 4,200 litre polythene tank along with an external 420 litre clean water rinse tank which feeds into a rotary rinse and flush system. Its hydraulically folding/tilting booms are constructed from steel to form a welded box section and have and anti-yaw system, hydraulic height adjustment and suspension.

“The boom was the one area I had some concerns about,” he says. “On most sprayers I find it to be the most vulnerable to damage and breakage but, to date, there has been no hint of a problem.”

There have been a few problems though in the tracking department, with activation of the steering axle not being as accurate as it might be. Mr Watt reports that this problem has now been resolved and the sprayer’s 18.4 x 38 tyres now neatly track those of the tractor’s and, as a result, reduce headland damage.

Included in the specification is a stainless steel spray line recirculation system which auto-primes and flushes out when spraying is completed. A multi-nozzle holder which can be rotated to present four different nozzle sizes with a fifth available for liquid fertiliser application through a dribble bar.

A two-lever valve control is provided for filling and flushing operations and, in the cab are the boom and the Teejet-sourced application controls with a four section off/on.

“It’s a sprayer which is straightforward to use with no heavy dependence on complicated electronic systems,” says Mr Watt. “When spraying pesticides at 100 litres/ha one tankful is sufficient to treat over 100 acres so the downtime spent re-filling is minimal. Overall, I am pleased with the sprayer.”