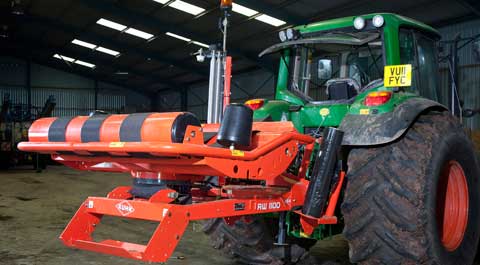 With the assistance of Kuhn’s Paul Jennings, we take a look at the points users should be looking at when setting their machines up for a season’s use.

Watch the videos and read the full report below.

Kuhn Farm Machinery’s RW 1100 C round bale wrapper is one of two tractor-mounted models manufactured by the company and is considered to be a yard-based machine where unwrapped bales are brought from the field and wrapped in situ before being stored.

A bale wrapper, which can be operated either by a tractor or a stationary power pack, requires a hydraulic oil flow of 26 litres/minute at 150 bar and can wrap bales weighing up to 1,200kg with diameters up to 1.5m. The C designation depicts use of a remote control system.

With the assistance of Kuhn’s Paul Jennings, we take a look at the points users should be looking at when setting their machines up for a season’s use.

The non-powered roller needs to be checked to ensure it turns freely – the bearings it runs on are sealed and, as such, there are no lubrication points.

Each of the three belts should be carefully checked to ensure there are no splits or other damage and, if they need to be replaced, make sure they are put on the right way round with the blue arrow pointing in the direction of travel.

Check too that the bale guide rollers turn freely and the belt guide pegs are all present.

The powered roller also runs on sealed bearings but has grease points to lubricate the planetary gear arrangement which powers it from within.

Drive for the powered roller is via a chain and sprockets. Check chain for wear and adjust tension as required by moving the two idlers.

The film cut-off and retaining mechanism employs a pawl and ratchet system to push the knife and film retain unit outwards as the bale is wrapped. As the table tips to eject the wrapped bale, the film is gripped and cut as the spring-loaded arm retracts.

Check the gap between the ratchet and the pawl is between 2mm and 6mm and that the knife blade is undamaged. It’s also worth having a look at the film retainer to ensure the rubber roller makes firm contact with the metal casing.

At the film dispenser check each of the two rollers to make sure they are clean and be prepared to use emery paper to smooth down any sharp points that may have been caused by stone particles and will puncture the film.

Check the gearing and note that the rollers each have different size cogs to produce a different speed and the required stretching action – normally 70% on these machines.

Optional but if fitted, the broken-film sensor needs to be checked to make sure the magnet attached to one of the tensioning rollers is in situ and the sensor gap is between 2mm and 5mm. Should the film break, the sensor initiates a complete shut down of the wrapper.

Remote control can save a lot of time but don’t let the battery run out mid season. It’s a good idea to remove the old battery at the end of each season and replace it with a new one at the beginning of the next.

With the table in the tipped position and the support bar in place, grease the two pivot bearings and check the action of the two proximity sensors – one to stop the table in the right position to tip the wrapped bale off, and the other to detect when the table is tipped. And while you’re looking, check the condition of the hydraulic hoses and joints for leaks and wear.

It’s a bit of a scrabble, and the machine needs to be safely supported, but there is a hydraulic filter underneath the front platform which needs to be changed every 8,000 bales – and there are more hoses and joints to check for leaks and wear.

When starting a new roll of film tie the end to the bale itself to ensure a clean first wrap.