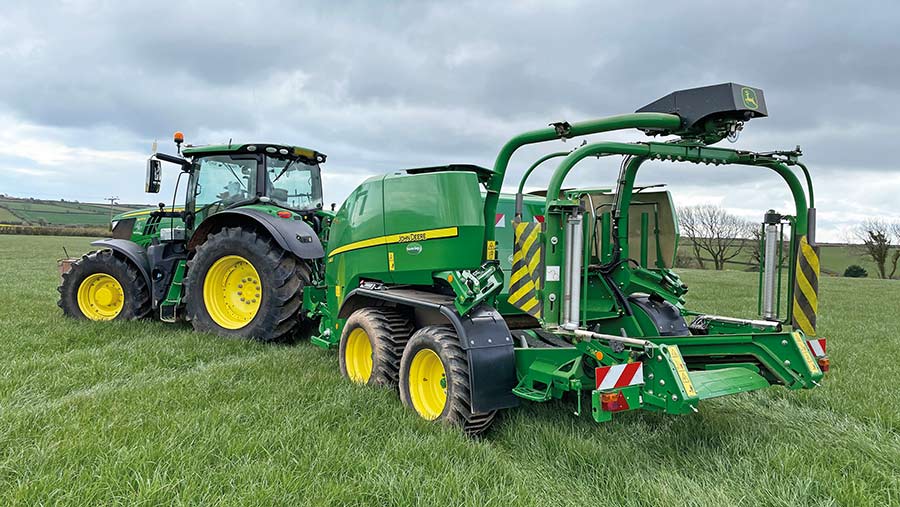 We get the lowdown on the C441R Maxicut baler-wrapper run by Devon contractor JS Haddy, Fields and Furrows, East Allington, Devon.

What made you choose a John Deere baler-wrapper?

After years of running a separate baler and wrapper, we decided it was time to streamline the operation. Using two machines took up valuable manpower and we were getting tired of wrapping bales through the night.

The only other model we considered was a McHale Fusion, but we struggled to get a demonstration and didn’t like the fact that it was so tall and relatively narrow.

We work on some pretty steep slopes and a low centre of gravity is important for stability.

Our local John Deere dealer, Mason Kings, brought a C441R over for us to try and we were impressed by its performance.

It made good-quality, dense bales, was easy to use and it sits low and wide, making it feel steady on hilly ground.

We ended up buying the demonstration model (with a 1,400 bale count), as it was a considerable saving over new, and it arrived just in time for the end of the 2020 season.

It is Isobus-ready and we run it on our John Deere 6215R through the Command Center screen.

After a request from one of our customers, we also added a bale flipper. This gives us the option of dropping bales onto their ends, which has been handy for stopping them rolling away on slopes.

It also reduces the risk of birds pecking holes in the wrap, as there are 10 layers on the ends. 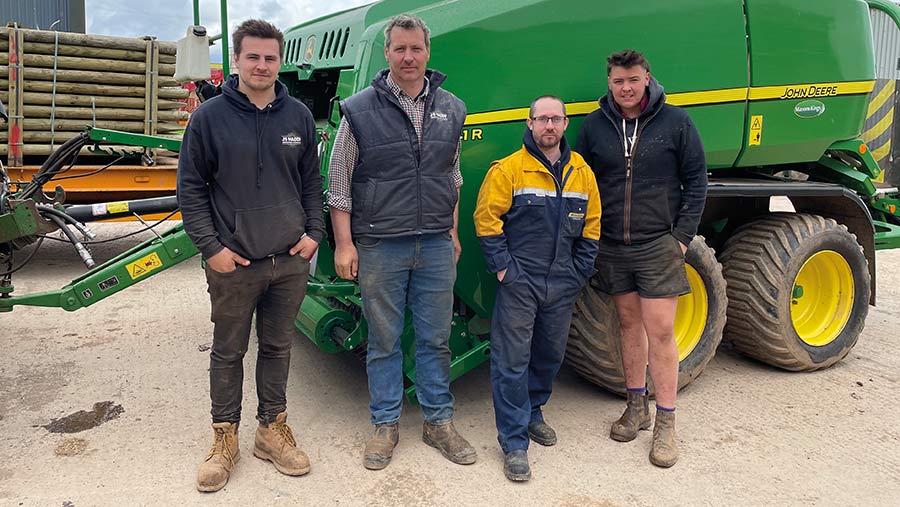 So far, the performance has been faultless. We’ve only produced 600 bales since buying it, but it hasn’t missed a beat and all of the bales have been a good shape.

One of the first things we noticed is how much more we can pack into a bale. Using a half set of knives at the end of the season, we were able to produce 900kg bales, which is a good 200kg more than the Lely Welger we were running before.

The 2m pick-up works well and it’s comfortable travelling at speeds of up to 10kph. Progress is only really limited by how much crop you can get into the machine and the wrapper easily keeps up – it can put on four layers in just 24s.

We have been particularly impressed by how well the bale exits from the chamber onto the transfer table.

Even when heading down some of our steeper slopes, it manages to roll in fine, and when we tested it going back up (carefully, we might add) they never rolled out.

We also like the wrap storage compartments, which open and drop the wrap down hydraulically. This puts it at a comfortable height for lifting and makes the job nice and easy.

All of the reports we have had from customers are positive and as we’re charging per bale, they’re happy that we can get an extra 200kg in each. The extra density also means they hold their shape well in the stack.

Running a half set of knives late season gave a fine enough chop, but we’ll probably switch to running the full set in peak season.

We are still getting used to the machine, so we haven’t spotted anything that should be changed yet.

One of the downsides of the twin axles and wide chassis is that it can be difficult to manoeuvre into narrow gateways – it’s just a shade under 3m wide and we have a lot of 3m gates around here, so it is a bit tight.

However, we want the width and the low centre of gravity for stability, so there has to be a compromise somewhere.

It’s hard to tell at the moment, but if it continues to be reliable, we would probably have another. Hopefully that day is a long way off, though.

The baler was such a substantial investment that we need to do a serious amount of work with it before we consider changing.

Our last Lely Welger did about 35,000 bales before we sold it and we’ll be looking to do a good few more with the JD.

As a result, we’re running this as our sole round baler, and it will be used for both hay and straw, with the wrapping table acting as a grouper.