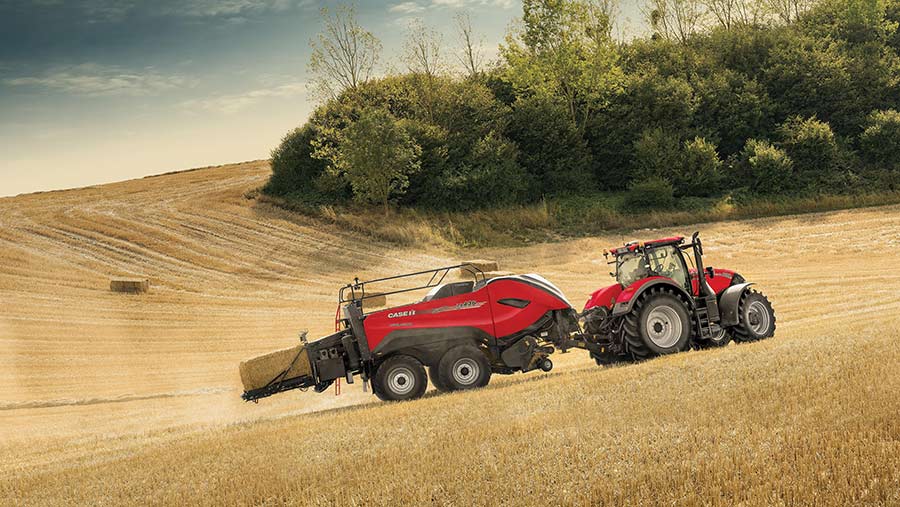 The choice of models, features and specifications remains exceptional, despite Case IH and Fendt trimming their line-ups.

See also: How to get a big square baler ready for the new season

The former has dropped the least popular non-cutting and rotor-cutting versions of the 80x70cm LB 324 XL to leave just the packer tine cutting model.

Conversely, it’s the packer-cutter version of the Fendt 990 that goes, leaving the plain packer and ProCut versions in place for those who want an 80x90cm bale.

All the newcomers are at the top end of the performance spectrum, with Case IH claiming a 22% bale density gain for its 120x90cm LB 436 HD baler over the LB 434 XL model that previously headed the range.

The machine’s operating principle is the same as its forerunners, and when operated by a tractor with Isobus 3 electronics, the baler control system can regulate forward speed to produce bales with a consistent number (and therefore size) of wads to meet operator requirements.

Equally, with a £559 software key unlock, the system can operate in maximum output mode to boost productivity and ease the operator’s workload along a variable swath.

Upgrades from current models, however, include a stronger frame, a new main gearbox and a speed-multiplying gearbox that increases the incoming 1,000rpm pto speed to 1,445rpm.

Together with a heavier, larger-diameter flywheel, this is designed to generate 230% more energy to give the machine its added performance potential.

The new gearbox incorporates a flywheel brake (where it is said to be much less susceptible to causing a fire), a flywheel slip clutch and auto drive disengage as overload protection.

This arrangement delivers the same 48 strokes/min plunger speed as other balers in the range, but with a 5% longer stroke and up to 58% more force to push material through a near-23% longer bale chamber of 4.05m.

The plunger itself has been further toughened up, while its impact is regulated by the seven hydraulic cylinders that squeeze the chamber and are automatically adjusted based on data from compression force sensors.

These features are shared by New Holland’s sister machine, the BigBaler 1290 HD, along with a bank of six new knotters and space for 36 XL size twine balls in swing-out storage compartments.

Two knot tying is retained, but the second knot is a loop style, said to be 37% stronger than before and resulting in an overall 26% increase in knotted twine tensile strength.

Refilling the extra-large twine box is made easier by the baler’s hydraulic suspension, which can be lowered to bring the storage compartments within easier reach, while also maintaining even weight distribution across the two axles and their larger 22.5in or 26.5in tyres. 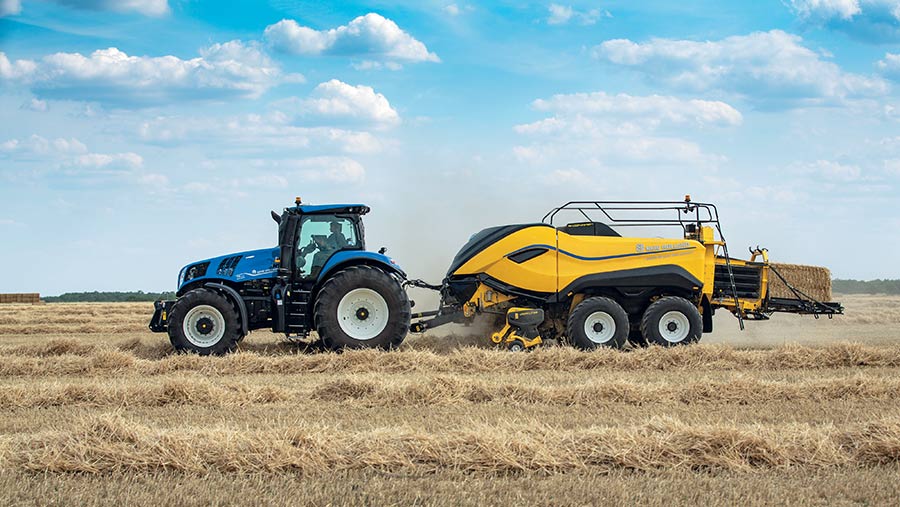 Krone’s contribution to the new big square baler introductions is the fifth-generation Big Pack 1270, 1290 and 1290 HDP.

For one thing, the regular 1270 and 1290 now have the same 3.6m-long bale chamber, with full-width top plate as the HDP, which Krone says results in better bale shape and increased bale weights, especially from the 120x70cm Big Pack 1270.

Also, the Variable Filling System (VFS) components have been beefed up for greater durability, with another significant change being that the pressure trigger for the VFS to transfer material from the pre-compression chamber up into the main chamber is now adjustable rather than fixed. 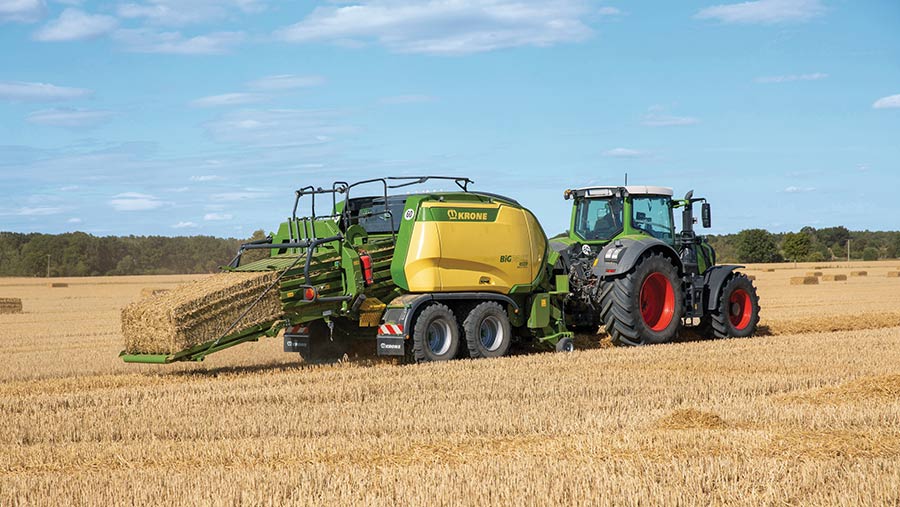 This means operators can control from the tractor cab the level of pre-compression and wad thickness or number of wads in each bale by five increments to better suit end-user requirements.

In addition, the driveline torque is measured to determine the load on the VFS and the machine as a whole, and is displayed as a bar graph to help all operators achieve maximum output.

Crop-cutting versions with an intake rotor now only use Krone’s Varicut system, with selectable numbers of up to 26 or 51 knives in cassettes that slide out to the side for blade maintenance and replacement.

The newcomers have also adopted the hydraulically operated side panels of the higher-output Big Pack 1290 HDP II, either to lower the twine ball compartments or to lift them clear for servicing and repair access.

Knotters for the double knot-tying system are enclosed and kept clear of dust and debris by turbine fans that also now send air to areas underneath the panels and downwards to the parabolic spring suspended axles.