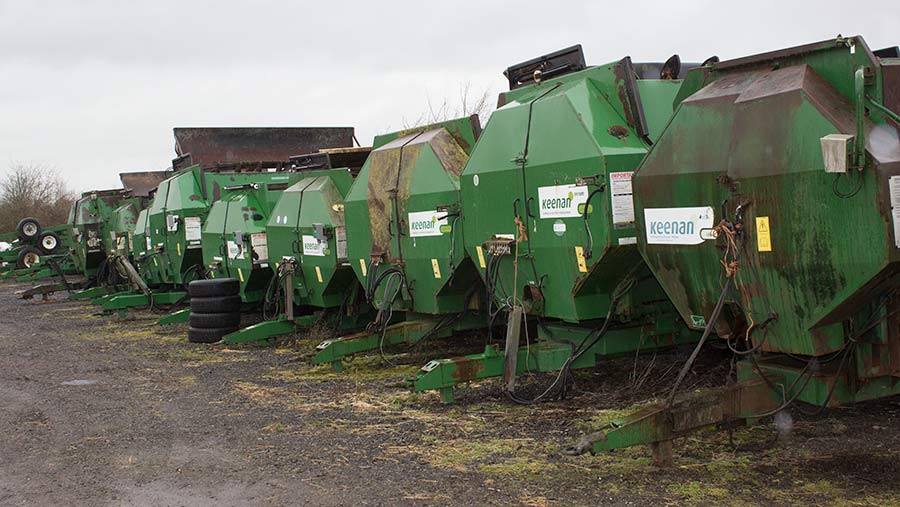 Following last week’s look at second-hand tub-based feeder wagons, this time around we’re focusing on the perks and pitfalls of used paddle-type machines

Keenan has been a dominating force on the paddle-type mixer market and, during a particularly buoyant couple of years during the 1990s, claimed almost 95% of the market.

The Irish maker remains a strong name in the business, but financial problems and a growing demand for tub machines have seen sales tail off a little.

That said, these machines still provide a cheap way of chopping, mixing and feeding rations and there’s a very healthy second-hand market, which is constantly drip-fed by bigger farms running a three- or five-year replacement policy.

Keenan machines still offer buyers the flexibility to feed over different-height troughs by fitting different side trays. They are well suited to those mixing pit silage with blend products and a bit of straw, and the most popular models will feed up to 120 cows/mix.

The simple, reliable nature of the machines means they’re quite a safe buy – it’s usually a case of what you see is what you get.

In fact, the design has hardly changed in 20-odd years, so if you’re already familiar with their inner workings then upgrading your existing model shouldn’t add too much mechanical complexity.

Chain drives and bearings are the key things to look out for and there’s a good network of Keenan spare part stockists and engineers should you need a quick fix.

We’ve picked out some important areas to consider, with the help of Gerry Conlon from used mixer specialist Enegis.

A common problem comes where the PTO shaft connects to the wagon and turns the two chain drives for the auger and rotor. The stubby shaft sits in two bearings, both of which need greasing periodically.

The rear bearing usually fails first because the nipple is harder to get to, but if it does then the whole drive shaft assembly can be replaced for £260 and in less than an hour.

It’s easy to check, too – just pull the shaft stub to and fro and, if it rattles, then at the very least the back bearing will have collapsed.

These plastic runners keep the chain tensioned to stop it leaping off the sprockets as the rotor comes under strain. They wear steadily over time and can be replaced for £50-£70, so shouldn’t be a deal breaker whatever state they’re in.

If you check just one thing, make sure it’s the main rotor shaft that runs through the machine from front to back.

It’s not uncommon for these to get thumped and twisted out of shape from a silage pit sleeper or shear grab bucket that is accidentally sent churning around the barrel at five in the morning.

This sort of incident will pull the shaft out of line, causing the chains to occasionally jump off the sprockets. The biggest give away that it’s out of shape is any sign that steel lugs have been welded either side of the front rotor bearing to hold it in position.

If that is the case then walk away from the machine –  the chances are that it will never run true again and it’s pretty much a write-off.

If this sort of thing happens to your own machine then you might be able to source a second-hand rotor, but it’s a big job. Costs vary, but on average you might pay £1,500-£2,000 for the rotor (it depends on the age and cost of the donor machine) and then expect to spend 40 hours to fit it.

Bear in mind that the impact might have caused damage to the rest of the machine, too

It’s worth looking for signs of greasing on the nipples and chains. Newer machines are often slightly better off in this department because they tend to be fitted with automatic oilers.

However, more conscientious owners can also retrofit the kits in under 3 hours. They cost about £350 and work on the hydraulics so every time the guillotine is operated the system dishes out a shot of oil to the chains.

There’s no good excuse not to grease the working parts, either – the pair of drive shaft bearings mentioned earlier are two of only six bearings in total (the others are at either end of the auger and rotor).

These three items are easy to check and fix. The ASA 100 chains cost about £220 apiece, cracked or badly chafed hydraulic pipes will be around £90 to replace and the recycled lorry tyres are £150 each. 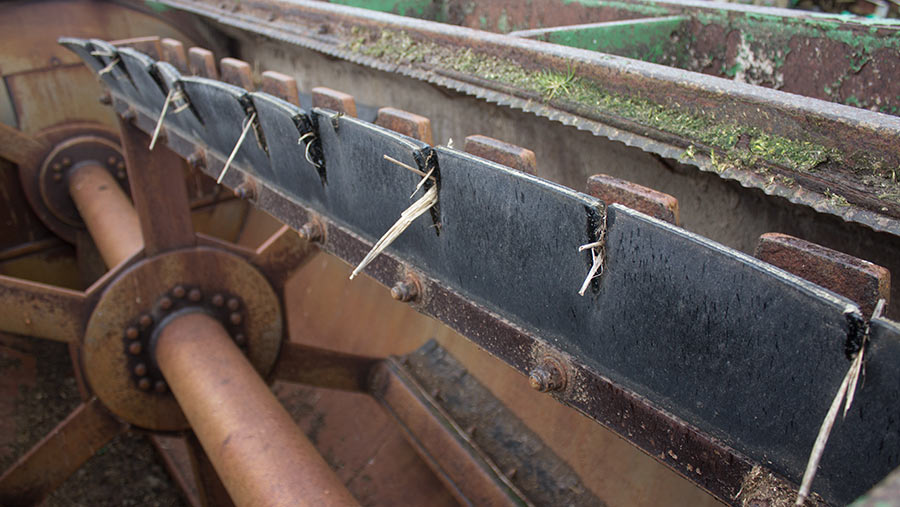 Paddle rubbers are a perishable item and should typically be replaced every couple of years. Though it’s tempting to hang on to them for a bit longer, you’ll gradually notice the chop getting less consistent and the speed of unloading slowing down.

They cost £60 each and are an easy fitting job, even for the mechanically incompetent.

Similarly, blades should be checked every six to 12 months and cost about £24 each.

The seal on the guillotine door is another item worth replacing periodically. Without it, most of the super-fine blend mix will end up on the floor. Expect to pay £80/set, and it’s another nut-and-bolt job to replace.

Auger flights are an expensive replacement. Keenan sold a batch of machines that were fitted with lighter-duty flights back in 2005 and, although the company claimed the steel was higher grade than previously used, they had a reputation for bending.

That said, it’s not a major risk anymore – most of these machines have now worked their way out of the system (either retired or fixed).

Getting someone to fit a complete replacement costs about £2,250. It’s a pig of a job to do – they have to be corkscrewed out of the front end – but if you’re feeling brave then you could order the replacement flights from somewhere like Astwell Augers in Kettering and fit them yourself.

Probably not a job for most owners, so it’s well worth avoiding anything that has thin or heavily worn flights. 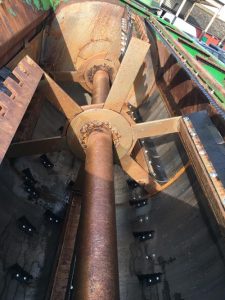 Every machine will have to be relined at some point in its life. Replacing the curved steel that forms the barrel is a pretty big job and doesn’t come particularly cheap, either.

Expect to pay about £600 for a set of 6mm thick plates from Keenan specialist GK Andrews, or closer to £700 direct from Keenan.

There’s also the option of a 5mm set with a slightly shorter life expectancy, so pick the size that best suits the age/work load of the wagon.

If you’re embarking on the job then the key is to lower them very carefully into position and then make sure they’re cranked down tight to the frame in the same position as the old ones.

It needs to be precise – if they’re not in the perfect position then it will alter the clearances of the moving parts and may lead to excessive wear as the rotor spins around.

First-timers will probably find it takes the fat end of a day to get them in the right position.

As for replacement times, don’t leave it until you can see through the base of the barrel – as soon as the skin starts to flex it’s time to reline.

The best place to check it is under the tray at the front as it’s almost always the first place to wear.

Naturally, rust is the first thing any buyer will notice, but it’s not as important as the working bearings and seals. Machines slosh around in slurry and acidic silage juice all day – along with never being cleaned – so a bit of tinworm is inevitable.

Older machines tend to suffer worst as their designs left more ledges and flat surfaces for the silage to sit. If aesthetics are important then you can get them shot-blasted, relined and painted, which costs from £1,200 to £1,600 depending on the extent of the damage.

As a guide, here are a few examples of the types of machines you can get and what you might expect to pay for them: 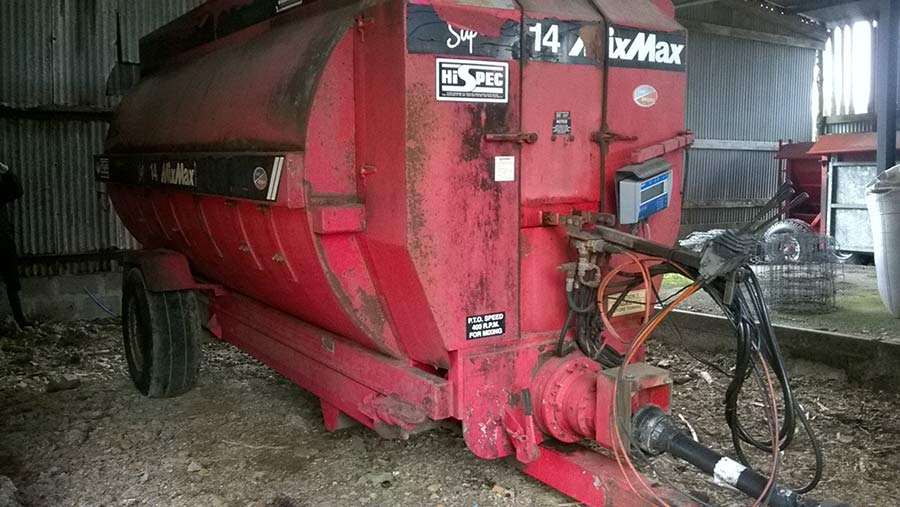 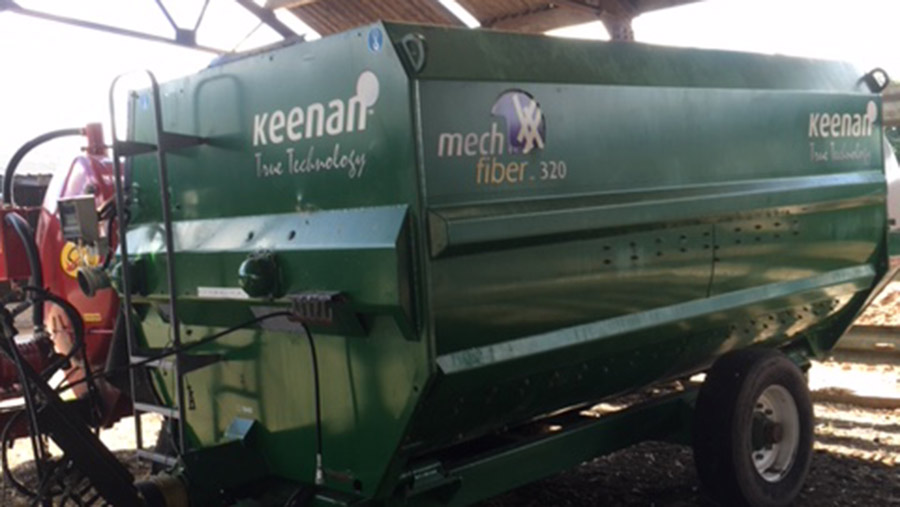 The debate around whether to run a tub or paddle-type machine has been rumbling on for almost two decades now and, in that time, there’s been a huge shift in demand.

After arriving in the early 1980s, Keenan’s paddle-type feeder dominated the pre-millennium era and, at one point, had as much as 95% of the British market.

Its ability to chop and mix material thoroughly was considered revolutionary at the time, but they have slowly been elbowed out by tub-type models – a design Keenan had been reluctant to consider until the recent takeover by Alltech and subsequent tie-up with Storti.

Almost all of the early tub-type machines hailed from Italy – a company called AGM was the first to sell them – and they had several perks over their paddle rivals.

Most significantly, their upright layout made them more manoeuvrable around the yard and they are also much better at chewing up round bales of straw and silage.

The earliest models had a few reliability problems, but the manufacturers cleaned up their act pretty quickly and the gearbox problems dried up.

They have had plenty of success, too – the paddle machine market share has shrunk pretty drastically and all of the main manufacturers, including Keenan, now build a tub.

Enegis sells second-hand feeders of all shapes and sizes from its base in Evesham, Worcestershire.

Wagons are typically specced up to order, so once you’ve picked a machine you can decide how much of a refurb you might want to give it.