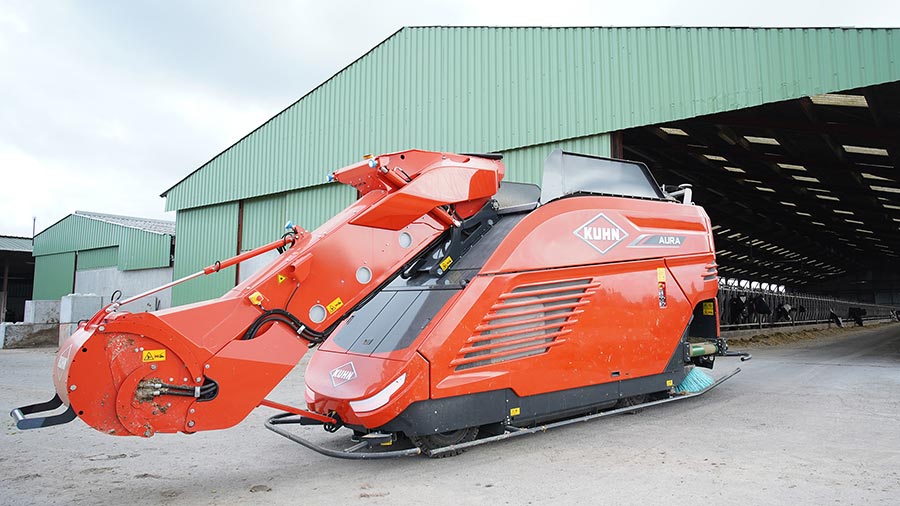 Labour shortages could be a thing of the past for dairy farms with the capital to invest in a swish autonomous feeder from Kuhn.

The self-propelled mixer wagon is capable of catering for 280 cows and is set to go on sale in France soon, with units scheduled to arrive in the UK from 2024.

It uses an RTK-guided GPS system to follow a route around the yard as it collects forage from a clamp and supplements from designated silos before mixing them and dispensing the ration along a feed barrier.

To do so, buyers will first have to map any permanent obstacles, though the Aura also has built-in sensors to detect and avoid any unexpected objects in its path.

A milling head is used to load grass or maize silage from a standard clamp, but mineral and concentrate silos will require special augers fitted with a receiver to communicate with the vehicle’s on-board transmitter.

Loading and weighing modules monitor the exact quantity of ingredients, which are then mixed by two vertical augers in the 3cu m tub. The speed of these can be adjusted to ensure the end product is homogenous and palatable, says Kuhn.

Managers can tweak the ration as often as they like, before uploading the details to the Aura remotely via a wifi connection.

The time and frequency of feeds can be set precisely throughout the day, with the ration dispensed using a conveyor that can work to both the left and right side of the machine.

It also carries rotating brushes on both sides that can be used to push nosed-out fodder back against the barrier and clean the clamp of any fallen material.

Power comes from a 56hp diesel engine, and top speed is 7kph when travelling between the loading areas and cow shed. This is reduced to a maximum of 2kph when feeding.