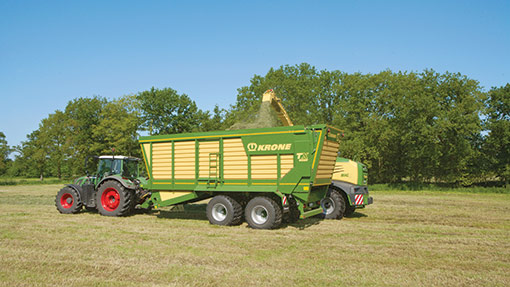 It took a long time to become established, but the forage wagon is now a common sight in silage fields.

Pick-up and intake designs now allow faster working speeds and higher spec undercarriages have improved speed and stability on the road, which has helped the UK market grow to about 80 new machines a year.

They provide a route into grass harvesting for smaller contractors by offering something different from established operators with self-propelled choppers.

“The main concern is over chop length, which is longer than with a precision chop harvester,” says Patrick Desmond of Strautmann importer Reco. “But users report fewer instances of twisted gut and increased milk butterfats, and cows seem to clear up all the feed that is provided, perform well and remain healthy.”

For a system that involves collection and carting with a single machine, efficiency and output depend on haulage distance.

“The ideal scenario is a farm where all the grass cut for silage is located within two miles of the clamp,” says Mr Desmond. “But on a cost per tonne basis, the forage wagon remains very competitive over longer hauls against traditional fuel-thirsty forage harvesting gangs.”

Put to the test

In a Northern Ireland trial with a round-trip haul of just over two miles, a 27cu m forage wagon took twice as  long to complete its task than a self-propelled chopper and four 22cu m trailers but involved only one man instead of five and used less than half as much fuel.


A round-trip of six miles would halve the forage wagon’s output but running two wagons would almost equal the harvester’s output and make savings in power, fuel and labour.


Critics argue there is greater risk of grass being exposed to deteriorating weather with the slower method.


However, the more relaxed pace allows time for thorough consolidation at the clamp.

Being in control of the silage operation is the main attraction of a forage wagon to Stewart Birse, who runs 65 cows on his 32ha all-grass farm at Newton Stewart, south-west Scotland.

“Contractors are not really interested in our size of business,” he says. “And I doubt they’d be prepared to stop if weather conditions deteriorated with just 8ha left to harvest.”

Mr Birse depends on good-quality silage to maintain a 7,800-litre herd average and has used a forage wagon for the past five years, which has been a Krone MX320 GL for the past two seasons.

Usual practice is to take two cuts for the clamp and to bale a third. Mowing is followed by tedding about four hours later, and the wilted grass is rowed up and then collected, chopped and carted by the Krone wagon the following day.

Grass is unloaded on to a concreted area from where a telehandler builds and consolidates the clamp. In terms of output, he reckons on clearing 16ha in a day.

“We start and finish at a reasonable hour and when we’re busy my wife does the milking, so there’s no real interruption to the job,” says Mr Birse.

“We can also stop mowing or harvesting when the weather starts to look a little doubtful – and that’s the control you get when operating your own forage wagon.”

The forthcoming silage campaign will be the fifth year that Lincolnshire contractor Johnson & Morris has operated forage wagons.

Previously, it either operated its own trailed chopper or used a precision chop contracting team and collectively provided 250ha of work for a Strautmann Giga Vitesse I.

“Customers noticed there was no wastage or mess in the fields,” says Kevin Johnson.

“The pick-up cleared up cleanly and the wide tyres and trailed steering axle meant the sward was left undamaged, even with a fully loaded machine turning on a wet headland.

“Reliability and speed of collection is key,” reckons Mr Johnson. “We can comfortably clear 25-28ha a day with each wagon but could do more – it just depends on the farm set-up.”

For the 2013 season, the two machines were traded in against a pair of Giga Vitesse 3601 wagons featuring the CFS pick-up and intake system, and they cleared 1,215ha between them.

Compared to other grass harvesting systems, collecting with a loader wagon involves fewer men and tractors, and makes efficient use of labour, says Kevin Johnson.