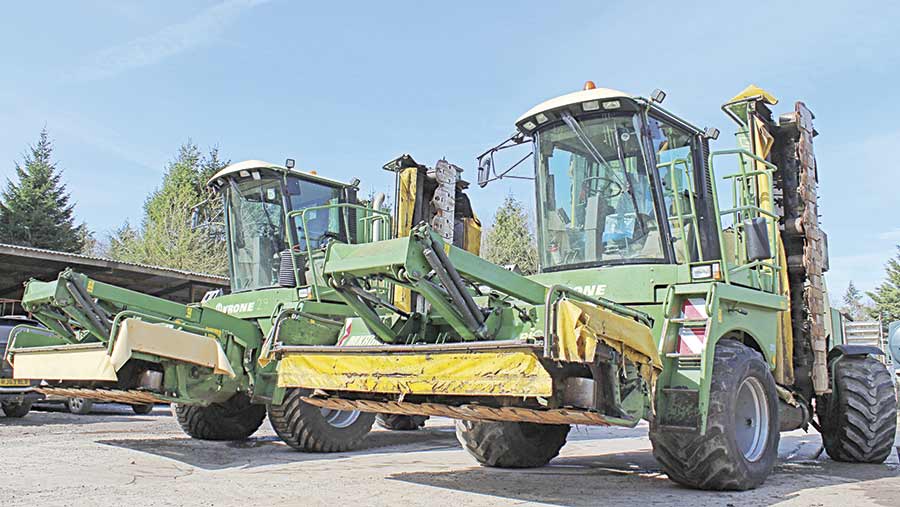 When faced with 2,500ha of grass to cut a season, many contractors would invest in set of shiny new kit covered by the welcome reassurance of a manufacturer’s warranty.

But Somerset operator Dave Gibbons and his son, Mike, have opted to put their faith in a pair of early 2000s Krone Big M1 self-propelled mowers instead.

Purchased second-hand for about £25,000 apiece, these 16- and 17-year-old machines clearly cost a fraction of a set of triple mowers and a tractor meaty enough to handle them.

And with average running costs of about £3,000 a season, they are not that pricey to keep running, either.

But according to Mr Gibbons, there’s good reason people aren’t queuing up to get their hands on one. “Most people are really scared of them,” he says.

“These older models haven’t got the best reputation, particularly in the electrics department, and they can cost a fortune to keep going.”

However, thanks to an experienced pair of drivers – Pete ‘Slim’ Harvey and Kevin Sparkes – and a dedicated team in the workshop, Mr Gibbons has managed to get to the bottom of most of their foibles.

As for their cutting performance, the Big Ms take some keeping up with.

Together, their three mower conditioners span 9m, and with working speeds of about 10mph they will comfortably smash through 8ha an hour.

On a fairly average day that means the two can work their way through at least 160ha.

One of the secrets to their high output is their rear-wheel steering, which means they can turn straight into the next run without any shunting back and forth.

But because they are good for 40kph on the road, they are also fairly efficient when covering stints of up to 25 miles between farms.

This performance is enough to keep them well in front of the firm’s two forage-harvester gangs – one fronted by a Claas Jaguar 950 and the other a Krone Big X700. 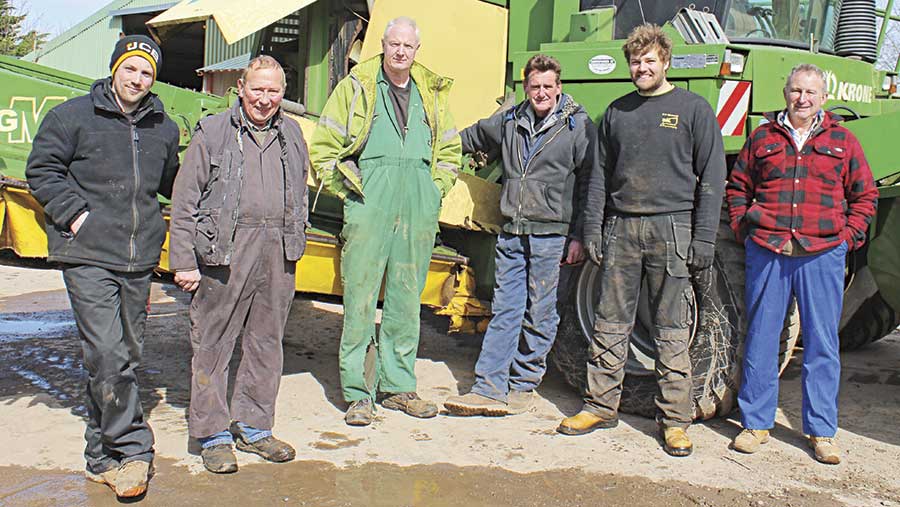 There’s also an older Jaguar 900 that plugs the gaps and stands in if there are any breakdowns.

Under each of the Big Ms’ rear tinwork, there’s a US-built 8.1-litre, six-cylinder John Deere engine that’s good for about 300hp.

This powers both the hydrostatic transmission and the mower units, via a chunky central gearbox and a set of wide V-belts.

According to Mr Gibbons, the mowers themselves are pretty tough, with drive coming into the centre of each bed, rather than the end disc.

The drivers also rate their coil-sprung suspension system highly – and the fact that the front mower is a ‘pull’ rather than ‘push’ unit. This helps it glide over the ground and ride over bumps more effectively. 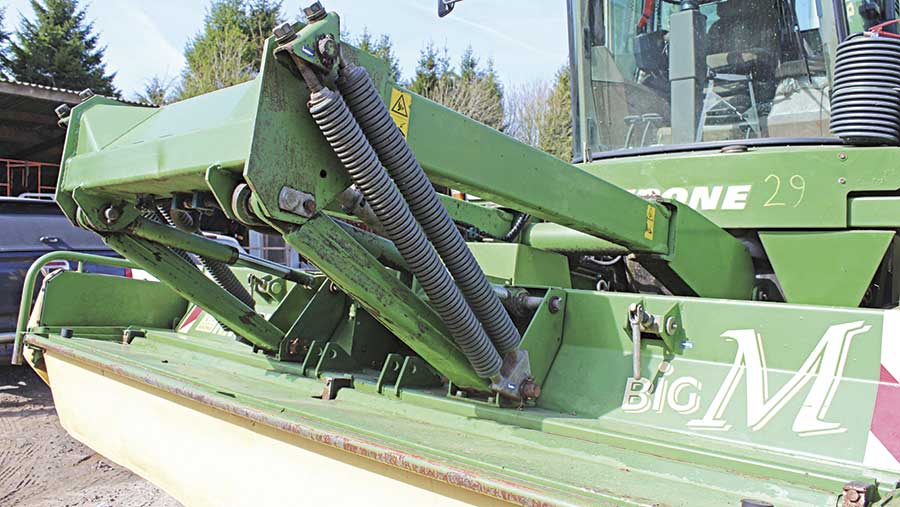 As for the drivers, they sit in a quiet John Deere Z-series combine cab with most mower functions grouped on the hydrostatic drive lever. 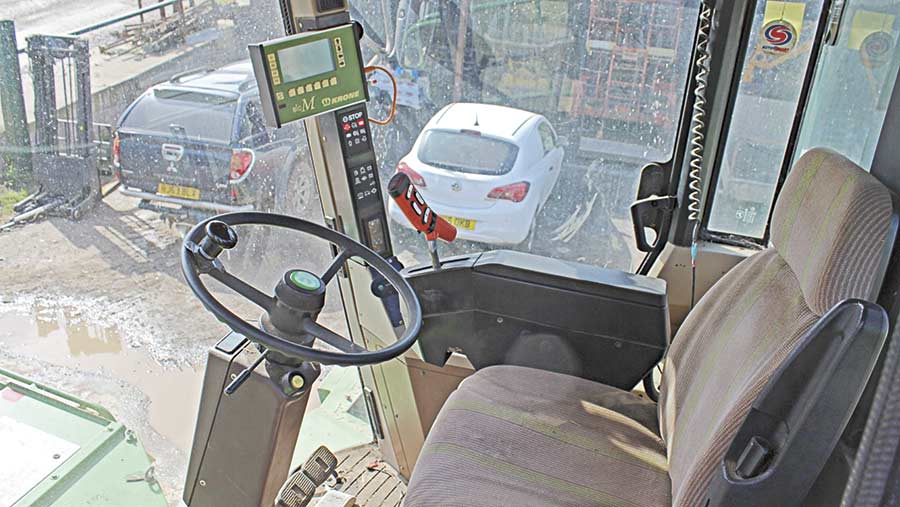 These mowers are the Gibbons’ second round of Big Ms. They bought them six years ago to replace a pair of late 1990s models that were starting to show their age.

In order to keep them running sweetly, the Gibbons have made a series of cute modifications and upgrades, most of which are thanks to their 70-year-old workshop guru, Hugh Boys.

One of his earlier modifications was to remove a dust extraction fan for the cooling pack.

This was mounted on the drive shaft into the main gearbox and when the blades became damaged or fell off (a frequent occurrence) it would vibrate so much that it trashed the spines on the shaft.

Ditching it immediately solved the problem – and a periodic blast of the rads with a Hydrovane compressor more than compensates for its absence. 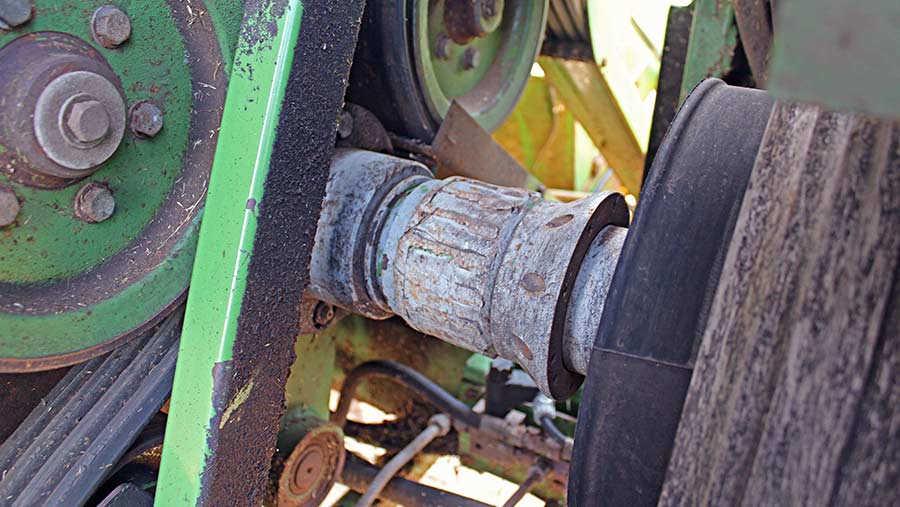 As for the mowers, one had its set of auger groupers removed – which the Gibbons have no demand for in their area – and the central gearboxes have been severely modified, too.

However, some of the biggest changes have been to the electrical system. Much of this is housed in a box on the right-hand side of the machine and is the source of most of the machines’ problems.

“If you ever want to buy one of these things, open the door to that box and take a big sniff,” says Mr Boys. “If it smells like a bonfire, shut it immediately and walk away quickly.”

That said, they are not beyond repair. Mr Boys has carried out multiple modifications to the electrical systems on the two machines.

These include re-soldering the circuit boards and bypassing some of the services that cause them to overheat. One of the biggest culprits is the air-conditioning, which now has its own dedicated power source.

On one occasion a circuit board burnt out beyond repair, so a new one was sourced from Krone at a cost of £854. 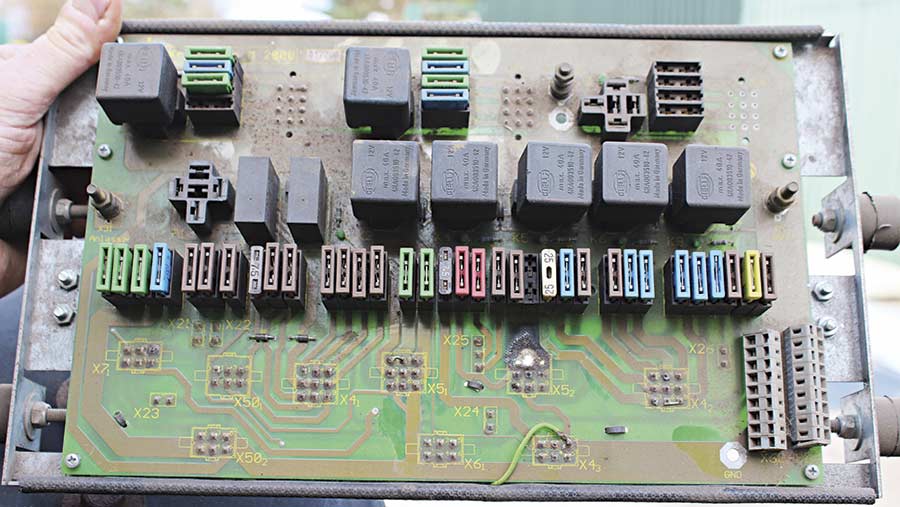 Mr Boys also cut an access panel in the cab floor to get easy access to a particularly troublesome multi-pin plug.

A slightly simpler modification was to ditch the original deep-cleated front tyres, which vibrated so much on the road that they rattled some of the relays out of their sockets.

A quick fix at the time involved altering the tread pattern with a chainsaw. But they have now been replaced with some much smoother turf treads.

These solved the problem on the road and they apparently still grip well on all but the steepest of banks.

Rebuilding some of the machines’ pricier components is another way the Gibbons can justify running these older models.

For example, the Big Ms run a full hydrostatic four-wheel drive system with a pump that sends oil to a Poclain motor on each wheel.

In road mode, all oil is sent to the front motors, giving a faster top speed. Meanwhile, field mode directs the flow to all four, giving all-wheel drive and a slower top speed. 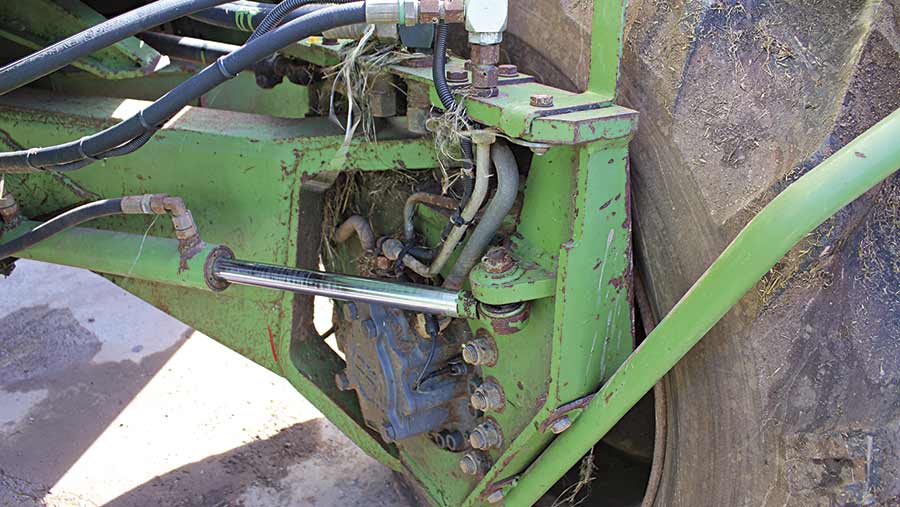 These motors are notorious culprits for sky-high repair bills as Poclain doesn’t offer a reconditioning service and prices for new ones run into the thousands.

However, after fabricating a set of tools to strip them down, Mr Boys discovered that they could be rebuilt with new seals and bearings from an independent supplier for less than £50.

When expensive speed sensors went wrong, some of them were replaced with similar versions from Maplin, which cost a fraction of the price.

Likewise, Mr Boys has reconditioned gearboxes throughout the machines, and he breathes new life into the disc drive units by pressing in new bearings. 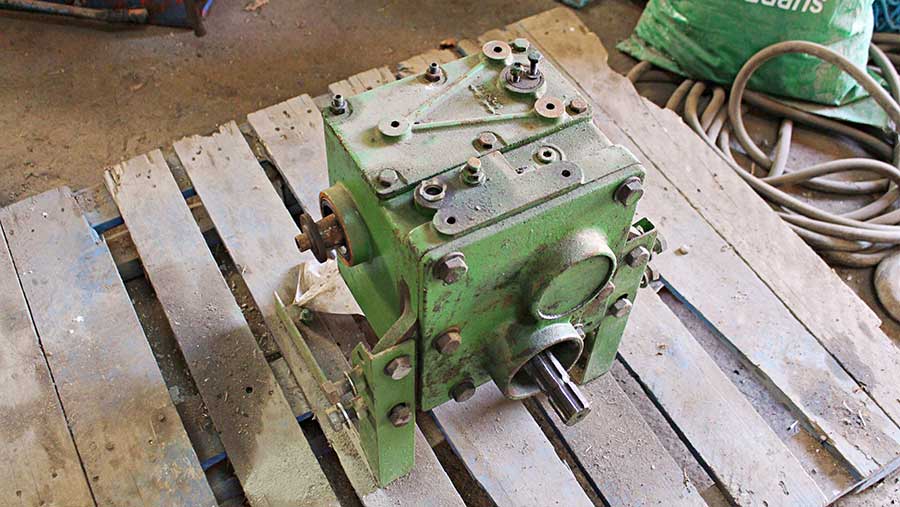 On top of the modifications, the Big Ms are treated to a major service ahead of each season’s cutting. This is carried out by their drivers, Mr Harvey and Mr Sparkes, and starts with changing all the oils.

The mower beds are also removed (a straightforward process) and inspected. If there’s any play in the disc units, they are replaced with a reconditioned one and any worn blade holders are swapped out, too. 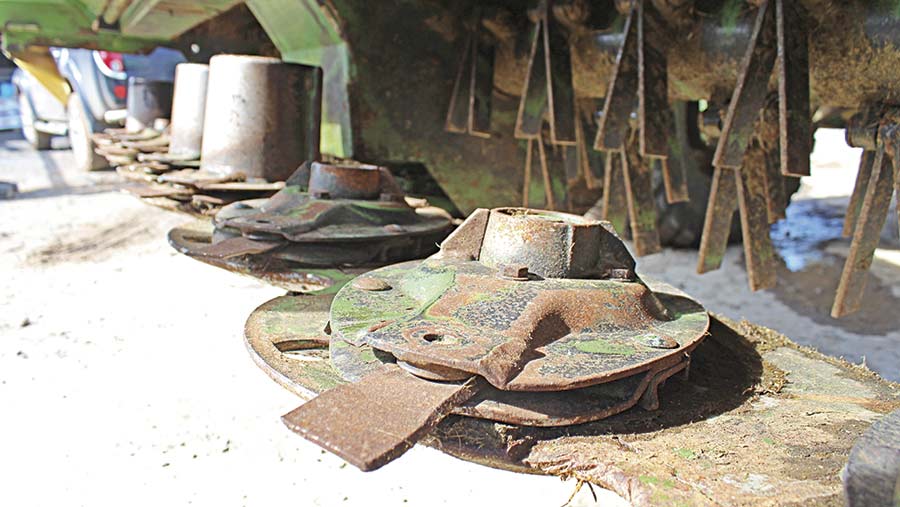 Conditioner bearings are also often replaced as the seals get damaged when string and net gets wrapped round the shaft.

If the skids are thin, they will weld new ones on and any bends are straightened out as well.

Last year the higher-houred of the two mowers was treated to a new set of mower beds all round at a cost of £9,000.

The old ones were then reconditioned and now act as spares if they have any breakdowns during the season.

Thankfully, Krone still has a very good parts service for these machines, says Mr Gibbons, so it makes the maintenance job fairly straightforward.

Dave and Mike Gibbons are continually on the look-out for other Big Ms to replace the current ones when they eventually wear out.

However, next time around they think they will probably end up going for a newer type 400 model, rather than another original M1 or its successor, the M2.

This is because most of the M1s that come up for sale these days are fairly tired and the M2s have a “push” rather than “pull” front mower, which they are not so keen on.