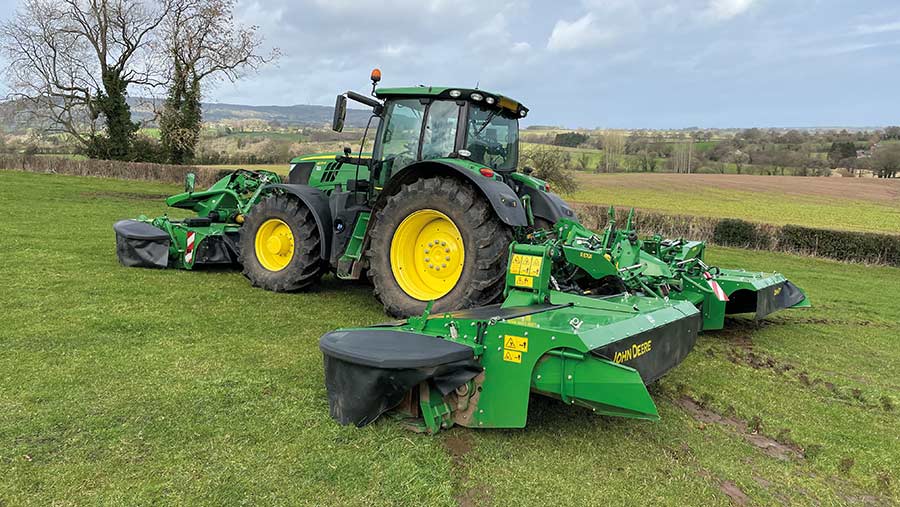 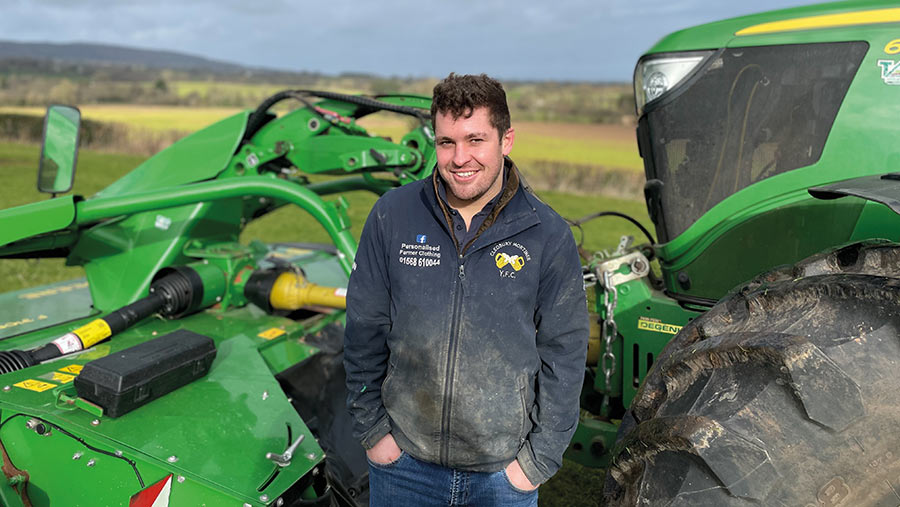 What made you choose John Deere triple mowers?

We were running McHale front and rear mowers before, which impressed us when they first arrived.

Build quality seemed good, they followed ground contours particularly well and looked like they would last – we even appeared in an advert on the back of Farmers Weekly saying how good we thought they were.

However, when we started putting hours on them, the skids and dishes on the Samasz beds wore out quickly.

The bearings weren’t brilliant either.

When the time came to change one of our front mowers, we decided to try a Kuhn instead, albeit with green paint as we get on well with John Deere dealer Tallis Amos.

This gave a better finish than the McHale, the grass fed through it more cleanly, and the skids were considerably more durable.

The next step was to move up to a set of triples so, based on the front mower’s performance, we upgraded to a Deere R870R.

It’s the smallest in the range but, with an 8.7m maximum cutting width, it’s wide enough for us.

It’s a shame the McHales didn’t work out as we’re big fans of all the other kit.

We run a couple of Fusions, a V6 belt baler, a 991 round-bale wrapper and a 998 for squares. All are excellent machines.

A 2019 John Deere 6215R Autopowr, which is nice to drive, has got plenty of power and a good GPS autosteer system.

The problem is that it’s a nightmare to keep it running cool when we’re mowing in dusty conditions.

It runs hot at the best of times, but when we’re cutting hay we’re forever stopping to clear out the screens.

Even when we blow the rads out with a Hydrovane compressor every morning, they soon get clogged and it overheats.

The problem got so bad with this tractor that after 1,500 hours the turbo failed and blew half its oil up the exhaust.

It’s something Deere really needs to sort as all our R-series tractors suffer, and it’s only our Case IH Puma that manages to stay cool in these conditions.

Cutting silage is less of a problem and we’ll cruise at speeds of between 10 and 15kph, depending on the thickness of the crop.

How have they performed?

We’re pleased with both the front and rear mowers. The quality of cut is excellent, they follow the ground well and they’re particularly well balanced.

The steel tine conditioner also does a good job of removing the waxy coat off the grass and getting it to wilt – we’ve never been convinced by the nylon ones.

We set it with the impeller in the closest position, running at the faster 1,000rpm speed, only dropping to 775rpm when cutting lucerne, which we don’t do so much of these days.

Another nice touch is that the mowers have hydraulic end guards, which you can flip up when going around the headland to leave a neater finish.

They’re also effortless when folding for transport. Knives are easy to change too, and we like the smooth flow of grass through the machine.

When we were running the John Deere front and McHale rear, we sent a drone up and you could clearly see the difference between the two.

Rather than operating all the mower’s functions off individual spools, there’s a neat control box in the cab.

This allows you to adjust the pressure in the hydro-pneumatic suspension system for both the front and rear mowers and lift them in and out of work.

The only thing that is a bit tedious is the mass of daily grease nipples.

Obviously, they help prolong the life of the machine, but it’s not much fun going round them every morning.

Although the control box is nice to use, it would be handy to have an Isobus option to reduce the clutter in the cab.

Based on the current performance we would be happy to have another set of Kuhn or John Deere triples.

Reliability is a big thing for us, and Kuhn/John Deere have got a good reputation in that area.

The only other brand that’s popular in our neck of the woods is Claas, which we do like the look of and would consider if the price was right.

Regardless of the brand, we are sold on the idea of running triples instead of a front and rear.

The extra cutting capacity is greate, but the biggest thing is how much better balanced they are on the back of the tractor.