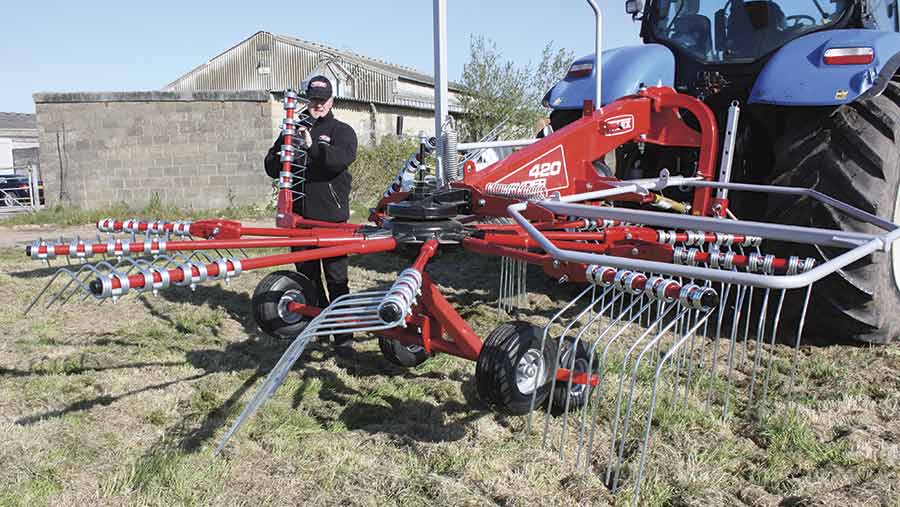 Grass rakes have a tough time of it and it’s not unusual for farmers to suffer some breakages during the season. But an Essex-based contractor has come up with a range of four UK-designed, Polish-made machines that he reckons are strong and easy to use.

Mark Woricker, a farmer-contractor based near Maldon, has been specialising in hay making since 2003.

He first made contact with Polish manufacturer Talex three years ago and was asked to help with future design work on drum mowers while visiting their factory.

He has used several makes of rake during his contracting career, he says, so was in a good position to know the good and bad points of the different machines. As a result, he was able to design the Talex Spyder rake so that it was both tough and easy to use.

The first task was to add extra steel plates on the headstock slide to make it stronger, then the end-plate was capped and the edge welded to stop it cracking.

Frames on rakes are often butted together, he says, whereas his version involves locking them together. There’s also an internal plate that keys the sections together before welding so that it goes together like a jigsaw.

The Spyder has 20deg of steering on the arms and 14deg on the main pivot, with lower link flexible arms. There’s also a twin-wheel beam axle for good contour following.

As the rake comes out of work, the front comes up first, then the back rises up gradually. It’s a strong piece of kit, he reckons, with 5mm steel for the main frame and 7mm steel for the arms.

Meanwhile, the substantial main pivot is greasable and the solid steel bearing carrier has a nipple too. All gearboxes are made by Comer.

Mr Woricker is also planning to bring in a UK-designed version of the Talex mower later in the season. Like the rake, the mower has been beefed up to cope with UK conditions. Cost is likely to be £5,000 for the 2.8m version and £5,500 for the 3.2m.