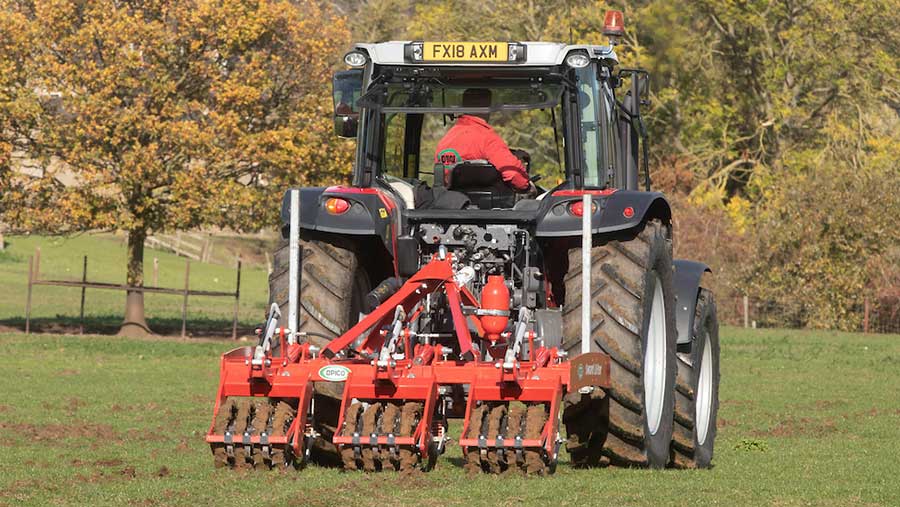 The UK saw another very wet season this winter resulting in waterlogged fields and the risk of the long-term damage to soils.

The rain has had a massive impact on grassland and arable crops. Stock kept out on saturated soil will have simply added to the damage.

“Flooding may have caused a collapse in soil structure that will need addressing, but you won’t know until you’ve dug a hole. In some places it’s just the surface that is affected.”

We take a look at the kit and the techniques that can help you get your soils back into good condition.

The options for repairing damaged grassland after a winter of such biblical weather may seem numerous, but in reality boil down to simple surface work or deeper subsoil remediation.

“Ultimately a great deal of grassland will need ripping up, but that won’t be an option until the autumn if there is stock to turn out now” says Mr Bentley.

The best bet is to harrow and stitch seed into the worst patches and accept that there will be more major work to do later in the year.

A lot of the issues may well sort themselves out over the summer, especially on strong clay soils that have a tendency to crack and form deep fissures as they dry.

There is plenty of equipment out there for grassland repair and aeration, but which machine is best for which job and when should it be done?

Who makes the kit?

A relative newcomer on the grassland front, subsoil looseners specially adapted to minimise the amount of surface disturbance can make a huge difference to grass swards on compacted ground.

Generally a straight disc runs ahead of the subsoiler legs to open a slot in the turf and avoid any ripping action.

The legs themselves are designed to produce minimal disturbance, while wide or narrow points can be fitted depending on the amount of surface heave to be generated.

The principle of these deep soil looseners is to create a shattering effect in the lower layers that will produce fissures through the soil profile, allowing roots to penetrate and oxygen to percolate through.

Finally, there is usually some sort of press roller – either individual units running behind each leg or a full-width unit. This closes the slot and helps to level out any ridging caused by the lifting effect of the machine.

When should you use a grass subsoiler?

When the subsoil is wet, the legs won’t be able to generate any shattering effect and can make the problem worse by smearing the slot they make. For that reason late summer and early autumn is usually best for this tool.

In a dry spring it may be possible to use a subsoiler, but there is a high risk that plant roots are damaged and, if a droughty time follows, their ability to scavenge for water and nutrients could be jeopardised with potential to impact significantly on grass growth.

What depth should I go at?

Digging a hole is the only way to assess how deep the problem is. Whether damage is done by sheep, cattle or machinery will dictate what depth the tines need to run at.

It’s worth choosing a machine that allows leg spacing to be altered – a subsoiler working relatively deep will generate heave across a wider inter-row width, whereas legs at shallow depth will not be able to work the full soil profile and will need narrowing up. 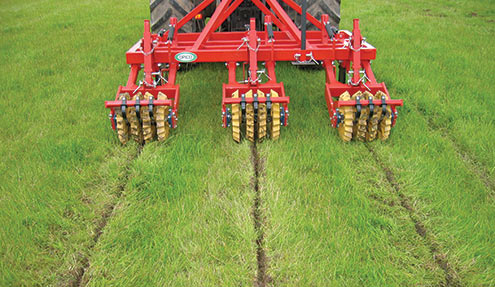 Opico’s five-leg Sward Lifter uses individually mounted pairs of twin Guttler press rings to firm up the ground opened up behind the leg.

Oxygen in the rooting zone can have a big effect on plant growth and, used in the right conditions, grassland aerators can help to get this essential element into compacted soils, improving yields for relatively little cost.

Most use some sort of spike (much like a plough-point) welded on to a tubular axle. Often weighted down with barrels or concrete ballast blocks, the machine has 150-200mm (6-8in) long spikes that cut slots into the surface.

Clearly this opens up the surface, but the other area where these machines are coming into their own is in reducing slurry run-off. The extra holding capacity created by the slots has a big impact on improving liquid penetration.

In fact, a number of manufacturers now build aerator injectors for hooking on to the back of a tanker or coupling up to an umbilical system.

When do you use a spike aerator?

Generally it’s a case of the drier the better, working on the basis that the shattering effect of the tines is greater in more brittle soils.

Stomp a spade into the grass. If it slides in like the proverbial knife through butter then the soil is too plastic and you’ll just end up creating smeared impenetrable pockets.

Also make an assessment of how much of a mark the tractor is making. There’s no point in doing more harm with the tyres than the good the aerator can achieve.

However, you have to be a bit realistic too. If the slurry lagoon is overflowing and the only way you can get on to spread without run-off is by opening up the ground with a slitter, then it’s worth doing. 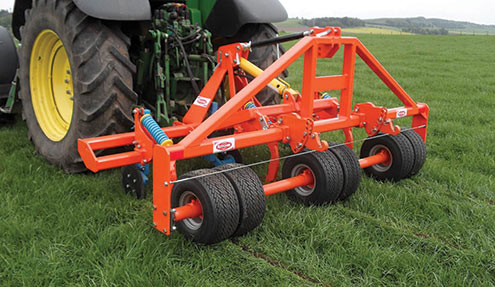 David Ritchie’s French-built Actisol subsoilers can have a spike aerator on the back.

These use the same principle as spike aerators, but toothed rollers add surface consolidation into the mix.

Looking much like a giant hedgehog packer off the back of a power-harrow, these heavy rollers are usually water-filled, so don’t need extra ballast to make sure they penetrate the surface.

Tines can be arranged either inline with the direction of travel or at 90 degrees. The latter have a more aggressive action in opening up the rooting zone, but because of the roller, any loosened stones and clods are pressed back into the surface.

When do you use a toothed roller?

It’s same story as a standard spike aerator really. You’ll only have a really positive effect when the ground is dry enough for the teeth to have a shattering effect down through the profile.

However, following a wet winter, the combined cultivation and consolidation action of the heavy roller could prove useful in levelling and opening up heavily poached ground, especially if you’re thinking of stitching in some seed. 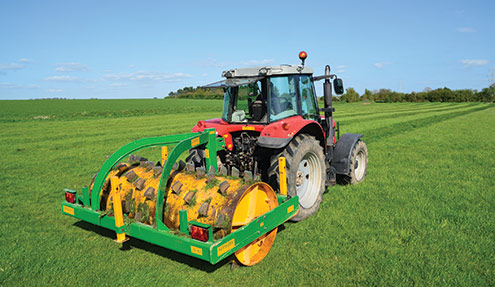 Aerworx’s heavy-toothed roller opens up small pockets for oxygen to get to the roots as well as consolidating the sward.

One thing last winter has made many realise is that there’s no substitute for keeping ditches and drains clear. A spot of good old-fashioned mole-draining doesn’t go amiss either.

Making sure drain outfalls are clear is the first job and can quite often be the cure for a lot of problems.

When do you go moling?

It’s the opposite story to subsoiling. Wet, plastic soil will hold the shape of the mole and stay open, whereas dry ground will tend to fall in behind it. That said, the surface needs to be dry to avoid the tractor creating a problem on top.

Heavily poached areas in gateways and around ring feeders aren’t going to recover without some serious remedial work. Levelling off the surface and stitching in seed is the best option.

One of the best tools for the job is a power-harrow. Work it in different directions and depths to get a level finish before broadcasting seed and rolling.

If you’ve got a lot to do or want a more professional tool for overseeding, then something like the Guttler Greenmaster may be an option to consider.

When do you stitch in?

To get seed in and up ready for mid-summer grazing, you’re going to have to go well before the subsoil is ready for loosening. Just remember these patches are likely to need subsoiling come autumn. 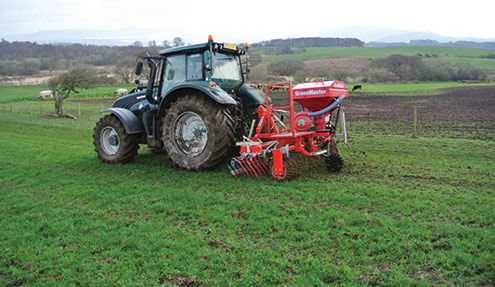 Sold by Wox Agri Services in the UK, the Guttler Greenmaster is one option for patching up heavily poached areas of grass.