Alongside the stalls of show-ready cattle, there was plenty of cutting-edge kit for livestock farmers to peruse.

Robotics took centre stage again, with manufacturers showing off their answers to the challenge of automating feeding, bedding and milking.

There were also bigger and more sophisticated systems for cutting and processing heavy grass crops. 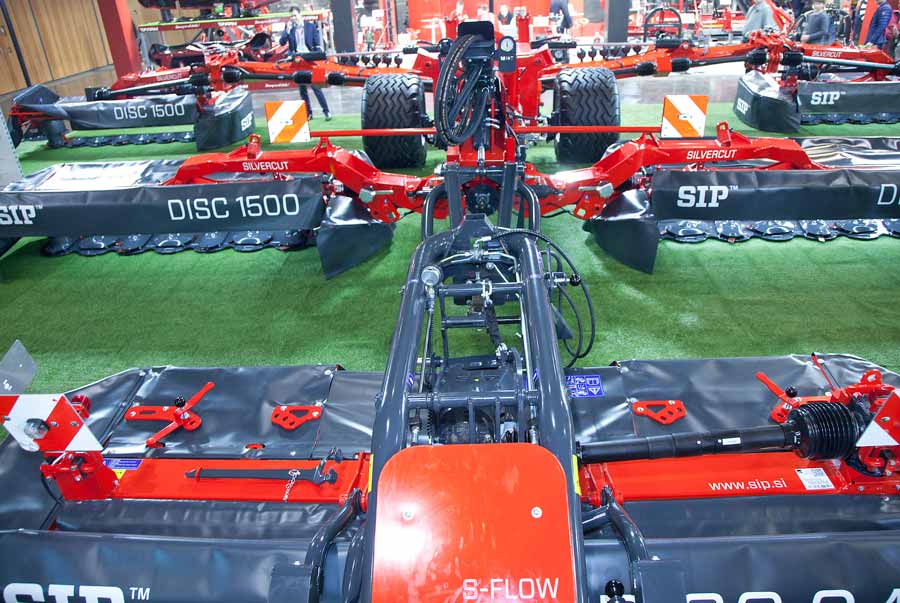 With a wingspan of 14.55m, the 9t outfit carries four mower beds – each with eight discs – that enable it to slash its way through more than 20ha/hour.

Power requirements are 300hp with the standard disc cutter, or an extra 50hp with conditioners attached.

According to SIP’s designers, adding a steering axle delivers handling on a par with the self-propelled Krone Big M mower, mainly because the rig follows directly in the path of the pulling tractor.

Standard kit includes hydraulic brakes and a break-back system that will hopefully avoid too much bent steelwork should the mower become too closely acquainted with a gatepost or water trough.

A neat auger system behind the discs means Pottinger’s Novacat mower can cut and merge grass in a single pass. 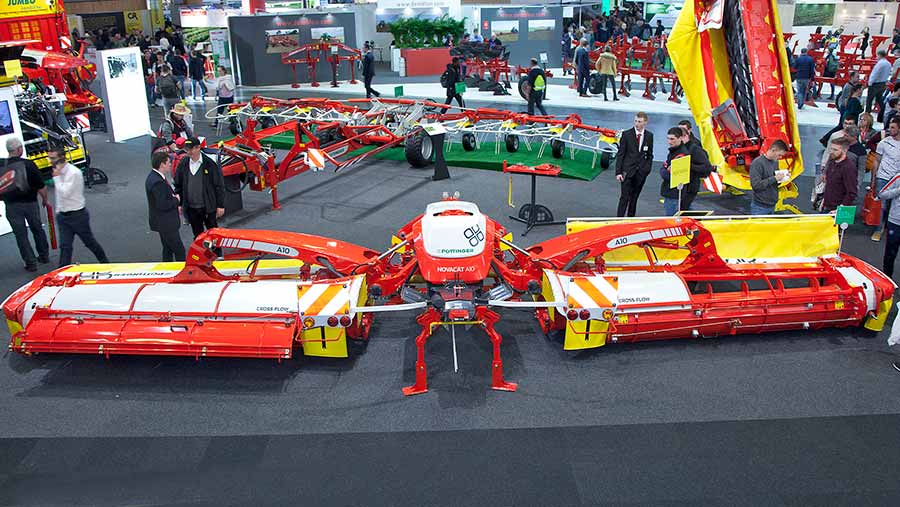 The lightweight, conditioner-free system requires very little power to run, says Pottinger, and the closed design sees the material thrown straight into the augers after cutting.

This keeps losses and contamination to a minimum.

The 10m-wide A10 will blitz 12ha/hour and carries 16 discs (eight per side), not including the single front-mounted unit to deal with the middle section.

Apparently a 200hp tractor should be enough to run the outfit – largely because it requires so much less power compared with a more traditional belt system.

In a bid to cut the dead time of carting a full forage wagon back to the clamp, Fliegl came up with the Buffel concept. 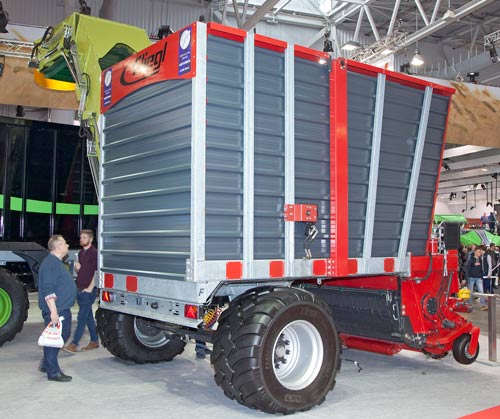 The novel machine works in the same way as a conventional wagon, but rather than having a large box on the back, it has an elevator to unload into trailers running alongside.

This continual chopping ability means it offers output more in line with a self-propelled outfit, and thanks to its own 10cu m storage capacity, it can keep going for short periods when there’s no trailer nearby.

The firm has been trialling the system for the past couple of years and is busy getting customer feedback to see if it’s worth taking the idea any further.

The dairy industry remains primed for a robotic invasion but, so far, automated feeders have failed to match the success of machines that take the legwork out of milking and bedding. 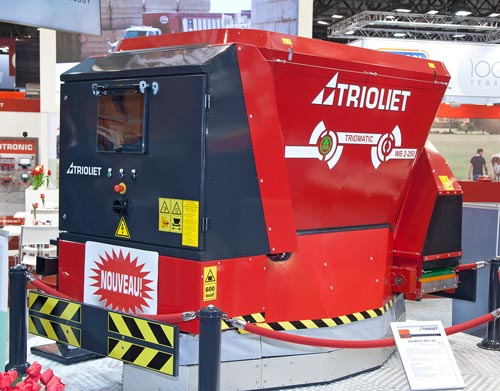 However, Trioliet hopes to encourage more farmers to make the switch to a reduced labour system with its battery-powered feeder, which scurries between the kitchen and the barrier to fill the bellies of up to 250 cows.

The firm already offered a gantry-type layout and one that required a power rail along the route, but its battery-based setup does away with much of this infrastructure.

Instead, it uses a metal line set in the concrete to provide a path, with progress between barns guided by sets of transponders. Top speed is a sedate 3kph.

Central to the design is a 600v nickel-metal hydride battery that should be able to handle 2,500 charges from flat to full.

In reality, says Trioliet, it’s unlikely to ever get below 90% charged, so it should last far longer than that.

Recharging tends to takes place while it’s filling up at the feed kitchen, where the firm says it can dish out different ration ingredients to 1kg precision.

For particularly long jaunts to outpost buildings, buyers can fit an electric charge rail to provide a power top-up.

Total capacity is pretty low – just 2.5cu m – but the quality and accuracy of the twin-auger mix means it can dish up a bespoke mix of just 70kg for a couple of dry cows.

Offering livestock a comfortable place to be taxied was Le Mans-based Cosnet with its Neptune 8.20 trailer. 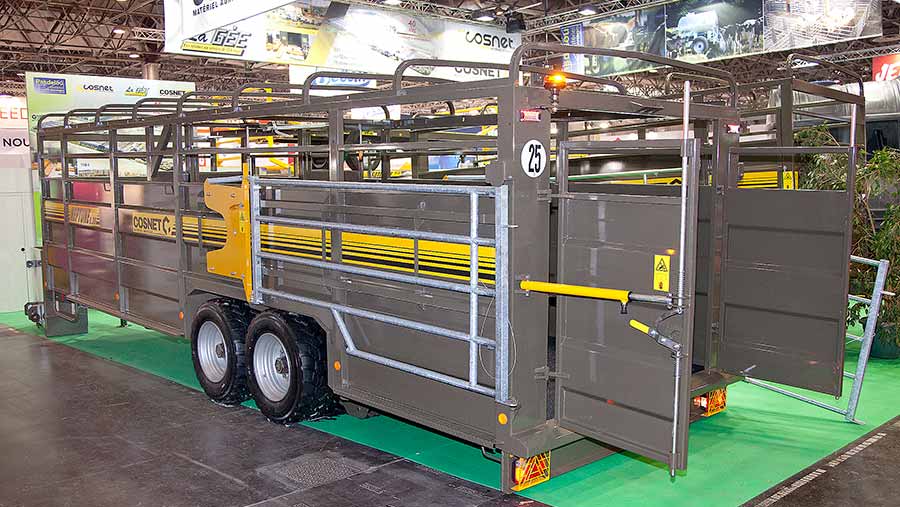 No ramps are required as the trailer’s body tilts via a front-mounted hydraulic ram to reduce the gap between the floor and the bed at the rear.

The standard deck is constructed of rubber resin and provides animals with a grippy and soft surface to rest on, while also helping to deaden the road noise.

The 8m-long model at Sima was fitted with a few optional extras, including a partition door that has multiple locating holes depending on how many animals need separating.

A clever addition at the back of the trailer is a set of gates (one on either side) that slide out past the rear to join on to buildings or runs, so there’s no need to get too close and risk dinging the lights.

Daily muck scraping duties could be made a lot more pleasant with the latest slurry-vacuuming robot from French dairy kit maker CRD. 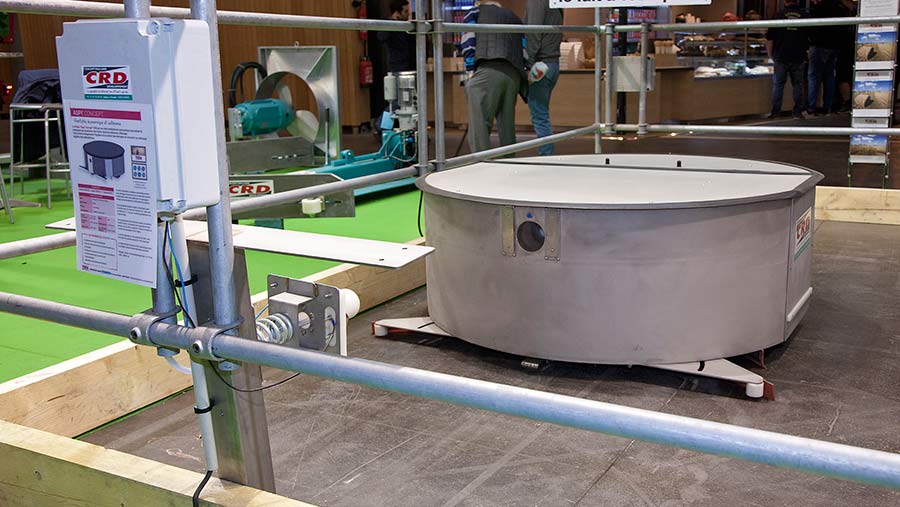 In buildings with solid floors, the Aspi concept vehicle will make its way around passages, scraping and vacuuming as it goes.

Once its 315-litre stainless steel tank is full, it will return to its base station, where it jettisons the load through a hatch and recharges its battery if needed.

The machine is also capable of working on slatted floors, but in this situation the vacuum is disabled.

To help shift more stubborn residues it can also be fitted with a 70-litre clean water tank with cleaning jets.

This can be topped up automatically at its base station.

Propulsion is handled by electric motors on the two drive wheels and it navigates using a laser guidance system with 240deg vision.

The 1.5m rubber scraping blade also has casters on the sides to help it scoot round corners.

The Aspi will tackle slopes of up to 10% and is capable of threading its way in and out of several different buildings.

Its route is mapped using a tablet computer that comes included in the package.

According to the firm, a single machine will cope with 80 to 100 cows.

Samson unveiled extra options on its 20cu m Flex muckspreader, including a single-axle version and a weigh-cell kit that takes fresh measurements every five seconds – a setup the firm expects to be specced on at least half of the models it sells in the future. 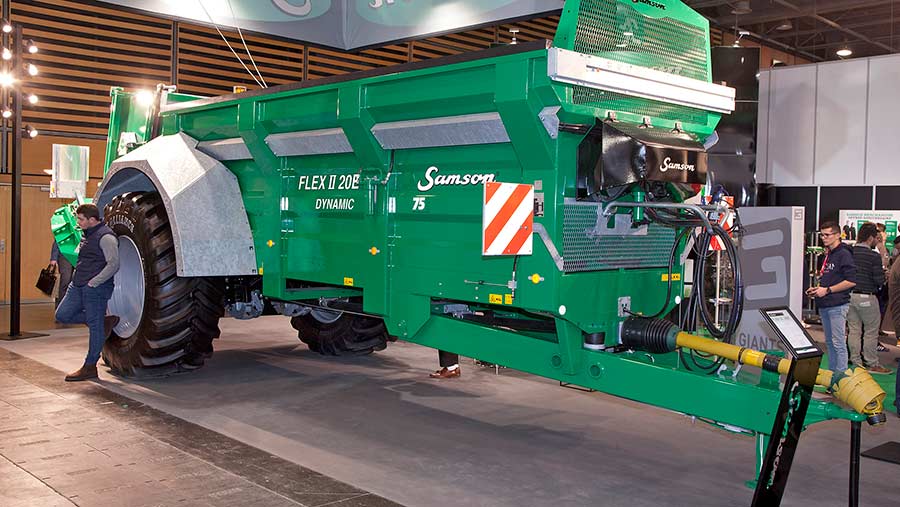 The maker, which recently added financially-stricken firm Pichon to its portfolio, also offers the new model with its SpreadMaster 8500 screen, making it possible to import application maps and vary the spread quantity accordingly.

Vertical beaters are capable of handling up to 70t/ha and will throw to 12m, while the horizontal beater layout will chuck lighter-weight fertilisers and industrial waste out to 24m, albeit at lower rates of up to 50t/ha.

If you fancy going left-field with your hedgecutter choice then French maker Rousseau offers a machine that uses a battery-free electric system to power the rotor. 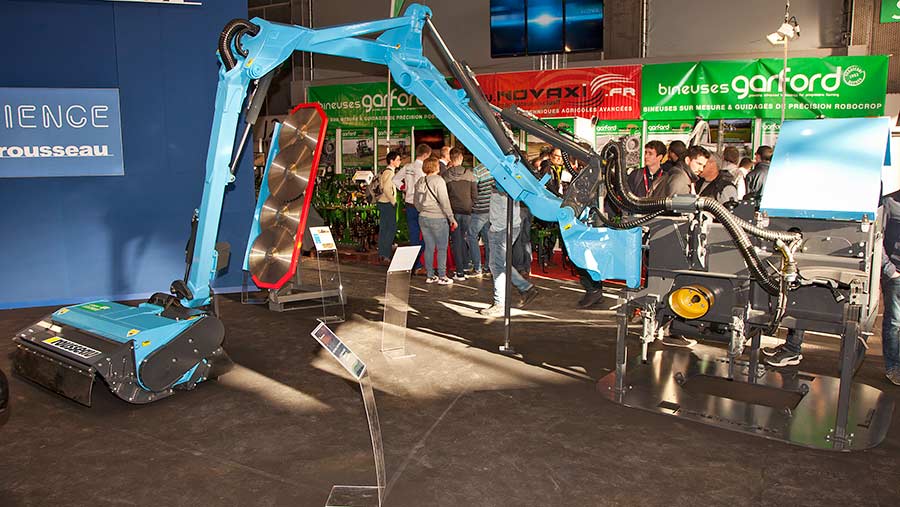 Apparently, this means it weighs roughly 80kg less than oil-powered equivalents and the driveline is more efficient, so tractor fuel use can be up to 35% lower.

It uses a combination of pto-powered 33kW generator and brushless motor, so the rotor spins independently of tractor pto speed (from 500 to 3,000rpm).

This means a much less powerful tractor can be used for the job, and it can run at far lower revs and overall noise is reduced, too.

Movements of the arm remain hydraulically powered, with industrial-grade cables and connectors running up to the cutting head.

The system is de-energised when the pto stops, so there’s no risk of electrocution when it’s not in use.

The kit is available on three models with 5.51-7.5m reach and they also come with a neat forward-reach arm that means the head can run ahead of the cab despite being rear-mounted.