Sima offered arable farmers a first look at some of the latest drilling innovations, including monster versions of Sly’s Boss drill, a neat single-row coulter control system from Hydrokit and the highest-tech seeder in Bednar’s Czech-made line-up.

Two years after releasing its Australian-inspired Boss no-till disc drill, Sly Agri has come up with a supersized version.

It’s called the Big Boss and will be available in working widths from 7m to 12m – the original version topped out at 6m, or 7m in a special build. 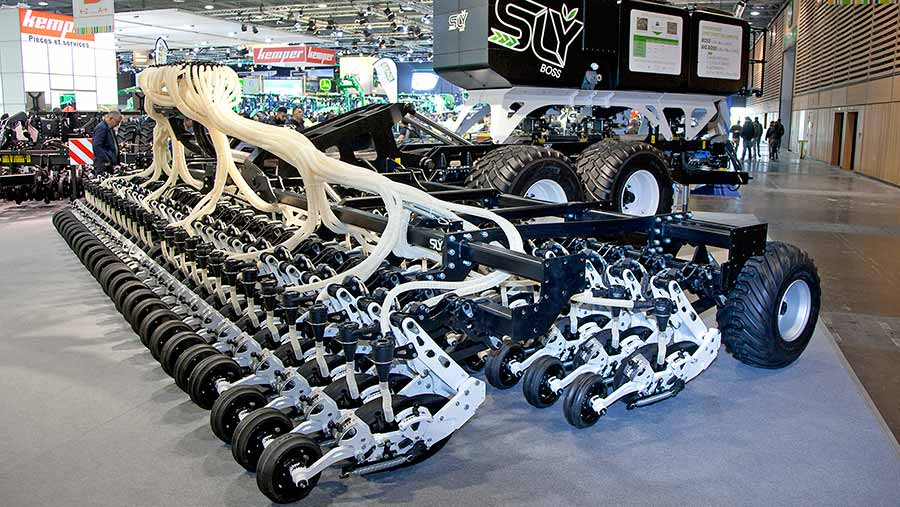 Rather than building a bespoke chassis to support the new rig, the firm turned to French implement maker Gourdon.

Its chunky twin-axle frame will handle 24t, so it should stand up to the rigours of rattling over a few thousand acres.

To this, the Anglo-French firm added three 2,000-litre seed tanks and one 300-litre small seeds unit.

This means it’s capable of sowing four products in one hit, which can be directed to either the front or rear coulters.

The 7m drill pictured was built to order for a 800ha farm near Bordeaux, France, and comes with 54 coulters set at 16.7cm spacing.

Apparently it takes just 250hp to pull, but it could probably do with a bit more than that when working on undulating ground.

All in, the drill weighs 13t, stands at 4.5m tall and when folded for transport measures 7.8m long. Crucially, it will fold to less than 3m for venturing on to the road.

This particular model is fitted with fixed axles, but there is the option of adding steering versions to make it a little more manoeuvrable.

The overnight outlawing of glyphosate sales in France has forced farmers to turn to mechanical weed control systems traditionally employed by organic growers. 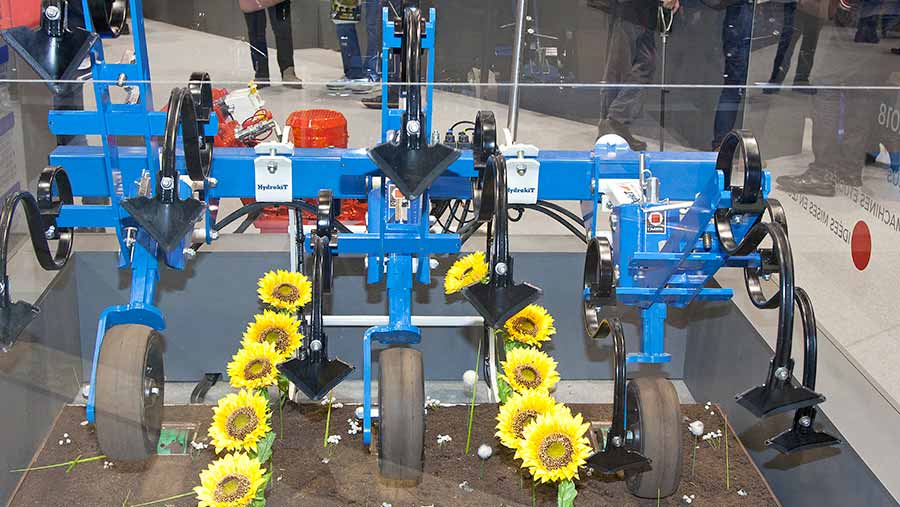 However, there’s one major problem with inter-row hoes and drills, in that they have no capacity for section control when reaching the headlands of irregular-shaped fields.

Hydraulics specialist Hydrokit has come up with a neat system that lifts individual coulter or tine assemblies out of work as each row meets the headland.

This means that the main frame of the implement can stay in the working position until the last section has reached the end of its bout.

The system can run on machines carrying up to 20 working rows, though the widest setups require a complicated web of plumbing involving up to three spool blocks.

Oil flows are kept low (roughly 1-1.5 litres/min) to lift and lower the components at a steady rate.

Layouts are bespoke to the brand or type of machine, as manufacturers use different parallelogram linkage layouts to join the coulters or tines to the main frame.

This dictates details such as the position of the double-acting rams and their stroke lengths.

The kit has been developed with the help of Trimble, which will provide the software to automate the work in the field.

The company has so far built 35 systems but, with the future of broad-spectrum weedkillers still foggy, it expects to sell plenty more in the coming years.

Arable farmers looking for wider kit in their cultivations arsenal were taking a keen interest in Kockerling’s 12.5m wide Rebell.

The large, scalloped 510mm discs sit at a 16deg angle to provide plenty of soil mixing and are mounted on sprung carriers to handle decent forward speeds. 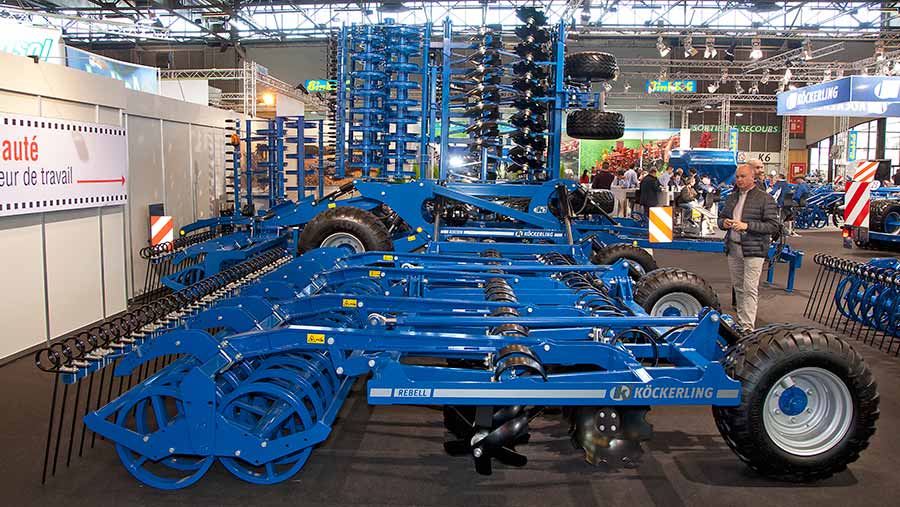 The rig weighs 12t and has 96 discs across the two banks on rows, with depth hydraulically controlled by guide wheels.

There are multiple rear packer options, including ringed rollers and harrows. The 8m model needs a modest-sounding 220hp to pull it, while the 12.5m will want the best part of 350hp.

Dropping three products in one pass is an optional extra on most new drills and Czech firm Bednar has joined the party with its latest Omega 00-FL drill.

Available in 4m and 6m guises, the bulky setup can be used in a variety of cultivation scenarios from direct drilling to plough-based. 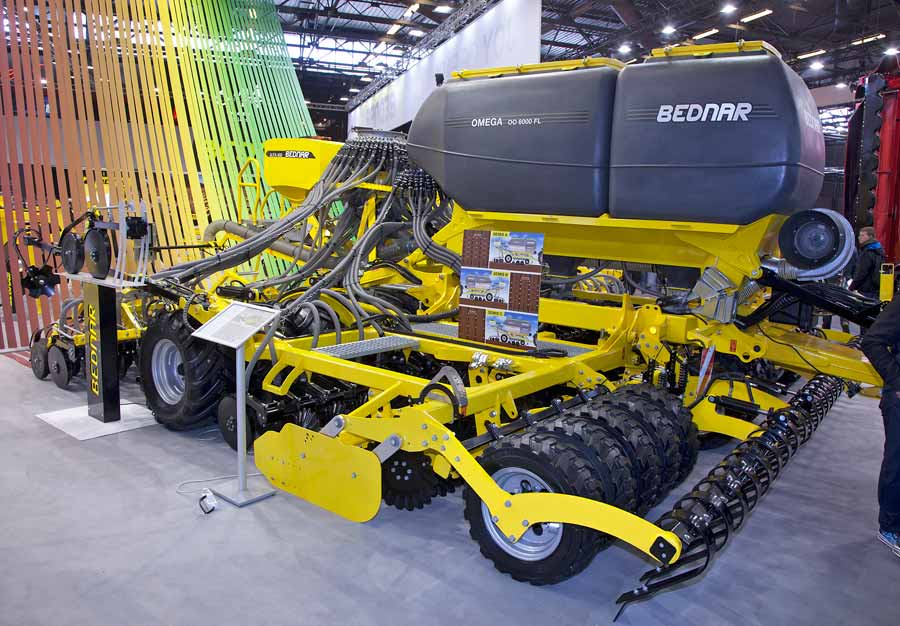 At the front is a levelling bar and packer wheels, followed by two rows of 460mm scalloped discs spaced at 250mm.

Behind these is a row of disc coulters that lay the fertiliser, either with the crop or in between the rows. These are fed from the 400-litre tank, which is sat on the rear of the drill and ideal for smaller seeds.

Behind the discs is another row of 425/55 R17 packer wheels, with the middle section doubling up for transport. At the rear are two banks of coulters arranged in pairs using parallelogram linkages to follow ground contours.

Two pressurised plastic hoppers help control seed flow to the huge distribution heads. There’s a 5,000-litre capacity for the two products along with the possibility of blockage sensors on each hose.

The 6m machine apparently requires 200-280hp on the front and can be controlled through a Muller terminal or link into the tractor’s screen via Isobus.

The drill at Sima was the first model ever built, so prices haven’t yet been finalised.

Visitors to the Sulky stand could catch a glimpse of the firm’s new brace of combination drills that will be launched officially in 2020.

The Master P30 is the simpler of the two and is designed for farmers that don’t want to deal with complicated control boxes and Isobus harnesses. 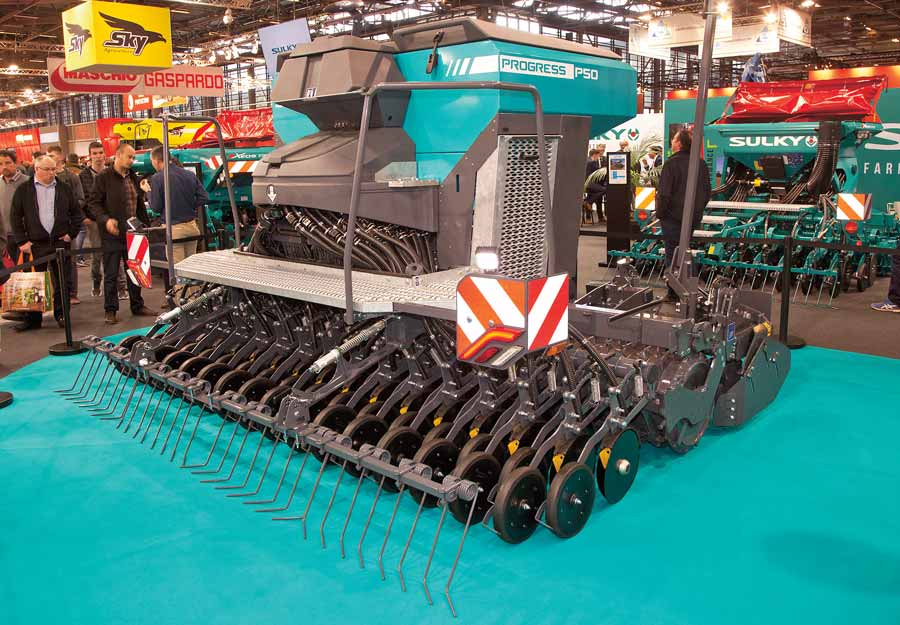 That means it has a simple RDS controller and one button to activate the calibration process.

Sulky says it has worked hard to streamline the production process so that it will be able to offer the P30 at an attractive price.

It will be available in 3m only and comes with a single-disc coulter assembly. At the other end of the spectrum there’s the new Progress model.

This comes with the option of one, two or three separate hoppers, meaning operators have the choice of putting together various blends of seeds and fertilisers.

This has been driven largely by the increasing interest in companion cropping, such as sowing spring beans with winter oilseed rape in a bid to keep grassweeds at bay.

Each of the drill’s hoppers has its own metering unit that feeds into one air stream to the double-disc coulter units.

It also has an electronic depth control system and blockage sensors.

Unlike the Master model, the Progress will be Isobus compatible and will also have the option of a tablet-based control system that communicates via a wifi hotspot on the drill.

Prices will be released nearer the official launch date.

To keep smaller seeds from being lost at the combine header on impact, attachment specialist Geringhoff was showing its latest draper model that uses an air stream to save wandering seeds from leaving the belts.

The air groove runs the full length of the header behind the cutterbar and power is provided by a separate pto shaft connected to the off-side feeder house. 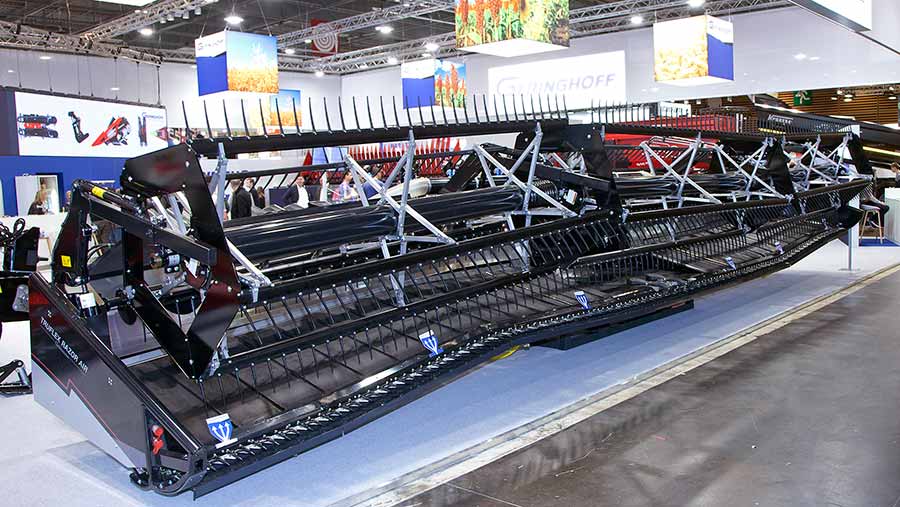 An onboard fan positioned behind the header drives an air feed under the draper belts and out of the grove.

There is also the option of disconnecting the pto when harvesting larger seed crops such as beans.

Geringhoff says this is different to a lot of the systems used in the US featuring tubes that reach around the reel, which it says blows a lot of dust up into the feeder house.

The integrated air system is available on the Truflex headers in 10.7m and 12.2m widths and will be shown at Cereals in the UK this year.

Elsewhere on the Geringhoff stand was the company’s biggest ever folding header, measuring 7.8m. When folded, the table sits at 4.2m wide, which is still legal in France and Scandinavian countries for road travel.

UK farmers are continuing to experiment with cover crops, but knocking the green matter down takes specialist equipment.

One machine that has come to the fore is the cross-cutter and French firm Treffler has introduced a three-roller machine for knocking down thick swards before direct drilling. 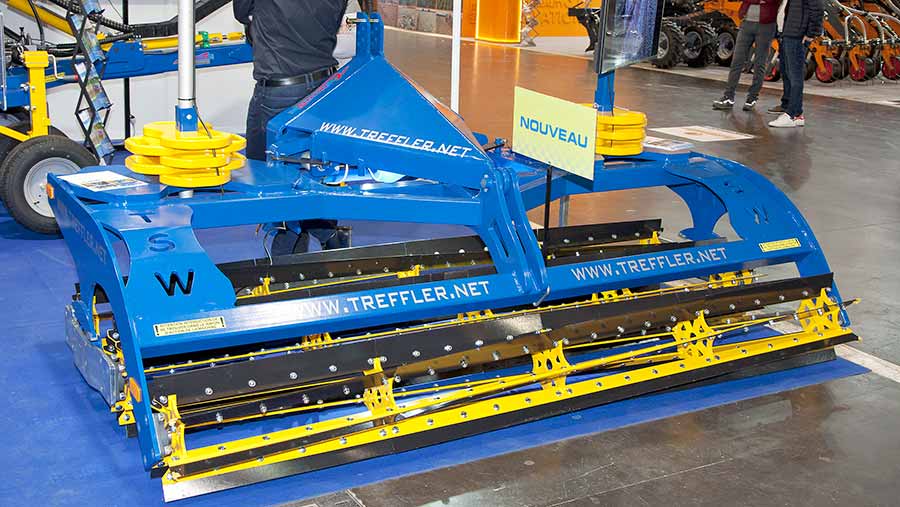 The Hardox blades offer a 100mm chop length and can rattle along at 15kph.

Currently there is only a 3m version available, but the company says there are plans to introduce a 7m in the near future and it should be available in the UK.

Spray technology is becoming increasingly more sophisticated but a clever invention from Tecnoma uses the simple concept of wind generated by forward momentum to funnel the liquid on to the crop.

An aluminium shield is attached to the full length of the new steel-framed boom – the Tecline -1 – and is angled to force the gust down into the path of the chemical. 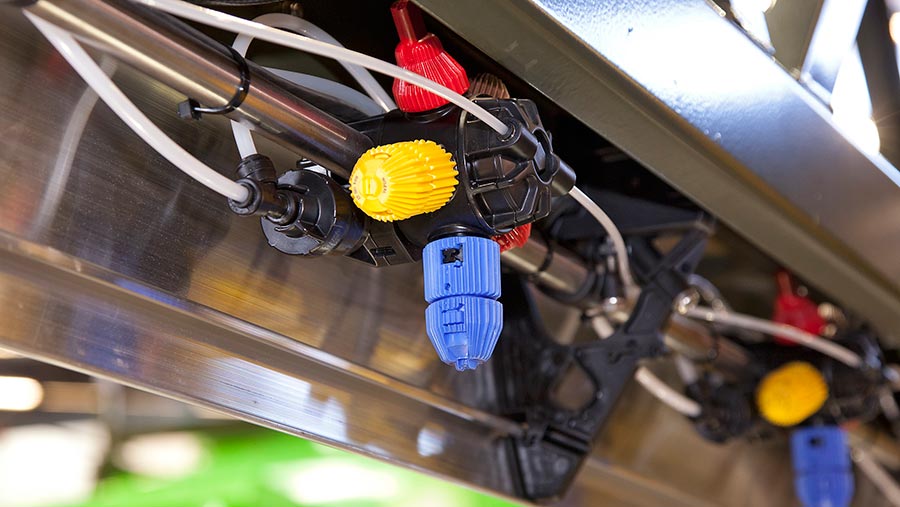 This reduces drift and helps the products hit the target areas, says Tecnoma. The shield also protects the nozzles from damage if the boom comes into contact with the ground of an object.

The Tecline-1 was attached to the Tecnis trailed sprayer that is available with 3,500- to 6000-litre tanks and booms up to 39m wide.

Thanks to a collaboration with fledgling ag-tech company Carbon Bee, Kuhn has begun work on a trial into targeted spot spraying.

The I-Spray project kicked off in January and uses a combination of high-definition cameras and individual nozzle control to detect and spray specific weeds. 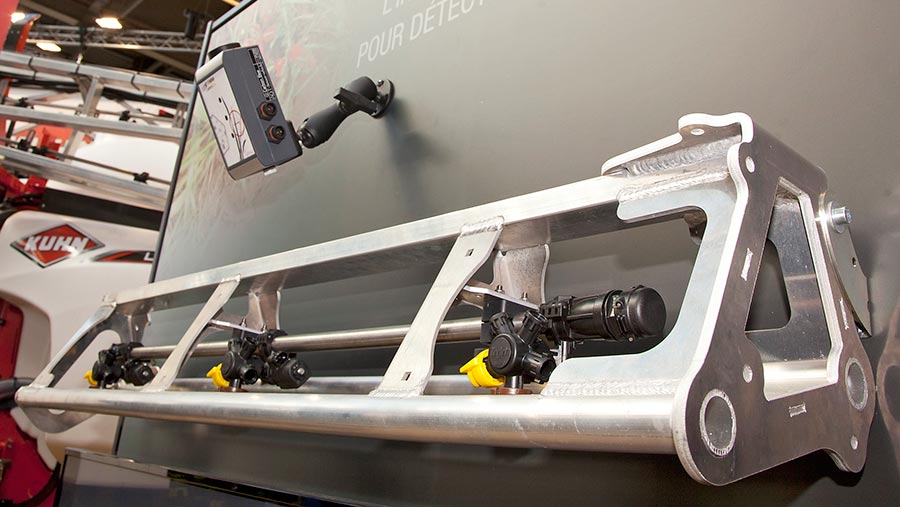 So far results are suggesting that it could offer chemical reductions of 50%-80%. For the trial, the system has been set up on a Kuhn Lexis trailed sprayer.

Cameras are mounted every 3m along the boom and they send their images to a box housing some artificial intelligence technology.

This quickly scans the images for target weeds, which it does by studying their shape, colour and texture.

Once satisfied it has a confirmed match, it will trigger the machine’s individual nozzle control system to deliver a blast of product just as the plant passes under the boom.

All this happens in a blink of the eye, meaning spraying speeds of up to 15kph can still be achieved.

Clearly the project is still in the early stages, but in a few years it could be available commercially.