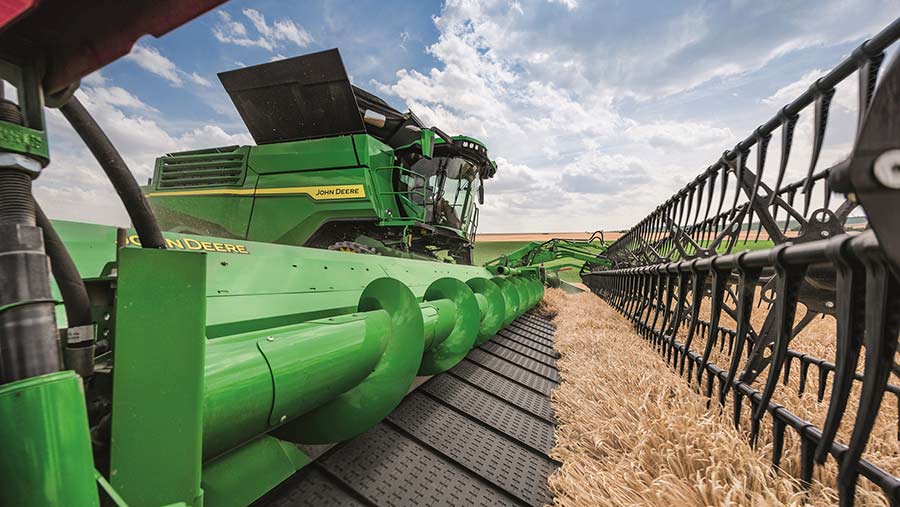 John Deere has finally lifted the lid on its new flagship 100t/hour combine after being stubbornly tight-lipped on details when it was launched at Agritechnica last year.

There was little doubt that the US firm was getting left behind by Claas, Agco and New Holland’s twin-rotor machines. The previous range-topping JD S-series harvester only had a single-rotor setup and struggled to compete with its rivals’ dual separators.

All that looks to have changed as the new two-model range starts with the 639hp X9 1000, which sits alongside the flagship X9 1100 that tops out at 700hp – both run from a 13.6-litre six-cylinder John Deere engine.

These stats fall 90hp shy of Claas’s biggest 8900 Lexion and Agco’s Ideal 10, but Deere reckons the reduced power is made up for by the efficiency of its separation and threshing area.

Testing of the harvesters has taken place in France, Canada and also Lincolnshire in the UK, and according to Deere, the larger 1100 is capable of 100t/hour with less than 1% grain loss.

The engine is coupled to a new Prodrive XL transmission, offering 30% more torque for tricky conditions such as hillsides and a 40kph road speed at a settled 1,700rpm. This works by using two hydraulic pumps to offer maximum torque at low speeds, with one pump reducing output to help trim fuel costs as speeds increase.

The bowels of the machine have seen the biggest change compared to the smaller S-series. These include the widest feeder house on the market, two 3,510x600mm rotors, and a large cleaning shoe.

The chevron-style feeder house moves the material towards the twin rotors. They’re somewhat shorter than the Claas Lexion models that have 4,200mm units, but the X9’s setup is 155mm wider.

The XDS rotors use the same modular underpinnings as the smaller S-series machines, with the separation area using a finger design to tease the last grains from the crop.

These are the largest threshing and separation areas John Deere has ever offered and crop goes through nine revolutions to help minimise losses. Elsewhere, the 7cu m Dyna-flo XL cleaning shoes have a 36% bigger cleaning area and 45% more capacity than the S-series, partly due to a new fan system.

Once through the cleaning system, the grain is held in a 14,800-litre tank on the smaller 1000 model and a 16,200-litre bin on the bigger 1100. Unloading speeds can reach 186 litres/sec, with optional folding augers and an adjustable spout.

A 1,250-litre fuel tank can be filled from empty in less than two-and-a-half minutes and there is the potential for the combine to run for 14 hours without a refuelling stop, says Deere. Transport width is below 3.5m on wheels or tracks.

Availability of the new machines is limited to dealer demos this year, with customers likely to have combines on farm for the 2021 harvest. Pricing is yet to be confirmed.

Deere is pretty boastful about its new machine and has launched an X-series challenge where is it laying down £25,000 for anyone with a different brand of harvester that can beat it in the field. The competition is based on grain losses from two competitive combines working in the same crop on the same day and at the same speed.

To match the high output of the X9 combine, Deere has bolstered its header line-up with new Draper ranges that can be added to most S-, T- and W-series machines.

The Hinged Draper Extended Table (HDX) is handy across undulating terrain and changing conditions, with the hinged frame offering twice the wing range of the Macdon FD1 flex draper, with 300mm travel on each end and a 1,200mm-wide belt.

Deere say the HDX model will outperform an auger header in oilseed rape in terms of capacity and maximum throughput. Sizes range from 10.7m up to 13.7m.

There is also a Hinged Draper Rigid Knife (HDR) aimed at farmers growing little or no oilseed rape in sizes from 10.7m to a huge 15.2m. Other models include a Rigid Draper Flex Knife (RDF) based on the existing 700FD, with new features to reduce grain loss by slowing the drum and centre feed belt by 20%.