Bale accumulators have the potential to massively improve the efficiency of field clearance and there are plenty of bits of kit on offer for those dealing with big squares.

But when it comes to round bales there aren’t quite so many options.

While combination baler-wrappers can drop bales in pairs to speed up trailer loading, there are very few trail-behind machines that will group them in bigger numbers.

Danish firm Fasterholt builds an accumulator wagon that catches bales as they exit the chamber and flips them up on to a gently inclined deck, where they roll to the rear and are secured by a jaw-like tailgate.

It is capable of carrying up to five 1.2m (4ft) bales and, once full, the operator releases them by opening the rear gates and tipping the bale deck.

The deck then returns to level and the gates shut – an electronic diverter valve switching oil flow between the loading cradle that catches the bales, the tailgate and the body tip ram.

The Harle family in County Durham has been running a Fasterholt RB3 on a McHale V660 for the past 10 years.

Previously, the business ran a Welger baler with a locally built twin bale grouper dropping pairs, but when it came to changing the baler, the opportunity arose to improve the efficiency of the operation. 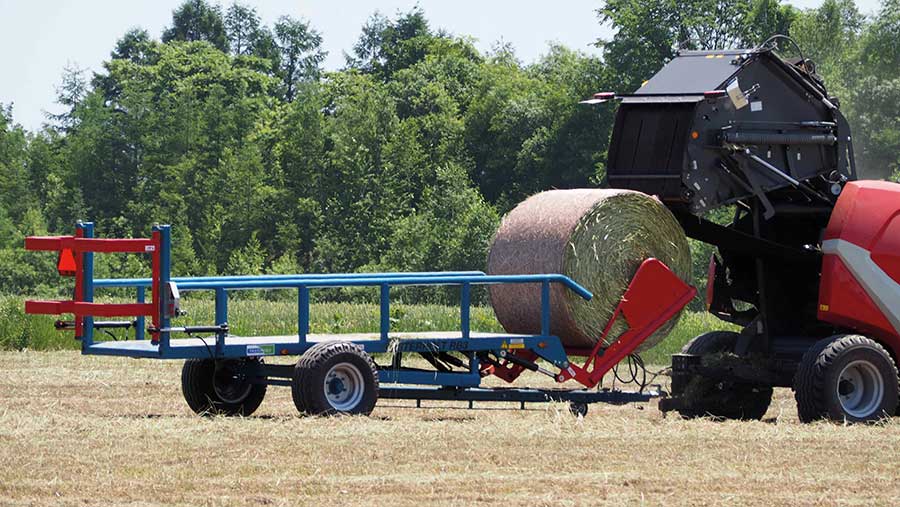 “At that point, my uncle, Peter, did a bit of research and found the Fasterholt.

“We were very keen on it because it had the potential to massively speed up our field clearance, as well as getting away from having loaders and trailers running across the fields causing compaction.”

However, when it first arrived it wasn’t simply a case of hitching it up and getting going – certain modifications were required to make it work on the farm’s undulating terrain.

“On flat ground it worked perfectly, but we don’t have much of that. We first had to alter the front end of the bale flipper so that there wasn’t such a step.

“Otherwise, going downhill, bales could stall before reaching the cradle. We also had to increase the angle of the tipping bed so that bales always run to the back.”

The unit’s offset drawbar couples up with a 50mm ball-hitch mounted alongside the baler’s left-hand wheel.

A standard McHale option, normally employed to hitch up a trailed wrapper, it had to be beefed up and braced to cope with the accumulator’s weight, which can reach almost 2.5t when loaded with five bales.

“In the majority of our fields we’re now able to carry all the bales to the headlands, which means getting them loaded and carted is at least three times quicker than before.

“And running on floatation tyres causes a fraction of the compaction compared with loaders and trailers.

“But it does slow the baling job down and needs a good man in the seat to make it work.

“We’re very lucky that the guy that does all our baling – Peter Wilson – also does all the carting and can really see the benefit.

“He’s a brilliant operator and is prepared to put up with the aggro of making it run.”

The unit has certain foibles that mean it requires a fair bit of attention to operate it.

In particular, there’s the potential to do quite a bit of damage if things aren’t done in the right order – the in-cab control box requiring the operator to toggle through the scoop, bed-tip and tailgate services at exactly the right time.

Lifting the bale on to the bed before the baler’s rear door has shut can also end in disaster.

A rearward-facing camera helps to avoid this and means it’s possible to keep an eye on the flipper and how many bales are on the bed, and whether they’ve all dropped off on the headland.

“The other thing that takes a bit of getting used to is how tight it is possible to turn.

“Because the trailed unit is hitched on behind the baler’s left-hand wheel, it’s possible to turn more sharply to the left.

“Try the same trick going right-handed and the drawbar can foul the bale kicker.

With limited options for round bale accumulators, Yorkshire contractor Adam Sewell and farmer William Atkinson joined forces to develop their own rig a few years ago.

The motivation for building such a machine was primarily to speed field clearance and aid a move towards a controlled-traffic approach. 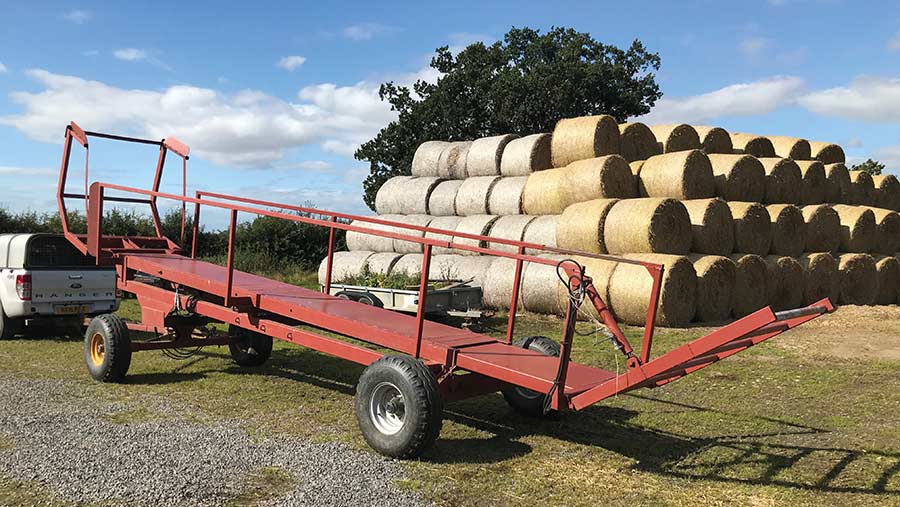 “Our fields aren’t huge, so we hoped that by carrying four or five bales to the headland we could do away with loaders and trailers running across the fields,” explains Mr Sewell.

“We sat down one winter, sketched out what we thought was needed and got it put together in the farm workshop.

“The focus was on keeping it simple, with as few moving parts as possible.

“In the first couple of years, it ran on the Atkinsons’ Vicon baler and, when they decided to get us to do their baling with our McHale V660, we only had to modify the hitch to swap it over.”

The dolly-type trailer is connected to the baler by an offset drawbar using a conventional 50mm ball-hitch.

This couples to a bracket bolted to the baler axle and chassis between the chamber and the right-hand wheel.

Up front, a hydraulic cradle catches the bales as the tailgate lifts and they drop out of the chamber, hoisting them up on to the trailer bed.

Getting the lift arc geometry right to ensure there was no chance of clashes between the rear door and bale scoop required some careful calculations.

Like the Fasterholt, the deck falls away to the rear with a drop-down tailgate holding the bales in place until the rig reaches the end of the run.

The difference from the Danish-built machine is that the body doesn’t tip, instead relying on gravity to do the job of discharging the load.

While this is great for simplicity and doesn’t require additional hydraulic services, the accumulator needs to be on level ground to unload.

“It’s not a jump-on-and-drive machine – you really need to have your wits about you to run it.

“Clearly, when you unload you don’t want to be on too much of a slope to risk the bales running away, but equally there needs to be enough of an incline to make sure they do roll off.

“The dolly is brilliant because it means you can turn as tight as you like, but it does take a while to come straight.

“Having a camera on the back of the baler is essential – I spend as much time looking at that as I do at what’s in front of me.”

While this requirement for attention is something that can be lived with, the unloading issue is set to be dealt with this winter.

With the chassis already separate from the load deck, the plan is to add a small tip ram at the front end.

Plumbed into the accumulator’s rear-door circuit, it will raise once the tailgate has dropped and lower once it’s back up in place.

There are a number of other options – both off-the-shelf and home-built – that group round bales in pairs or threes.

1. John Deere’s Plus2 bolts to the back of the baler and enables bales to be dropped in groups of three. Sadly, it’s only available in the US. 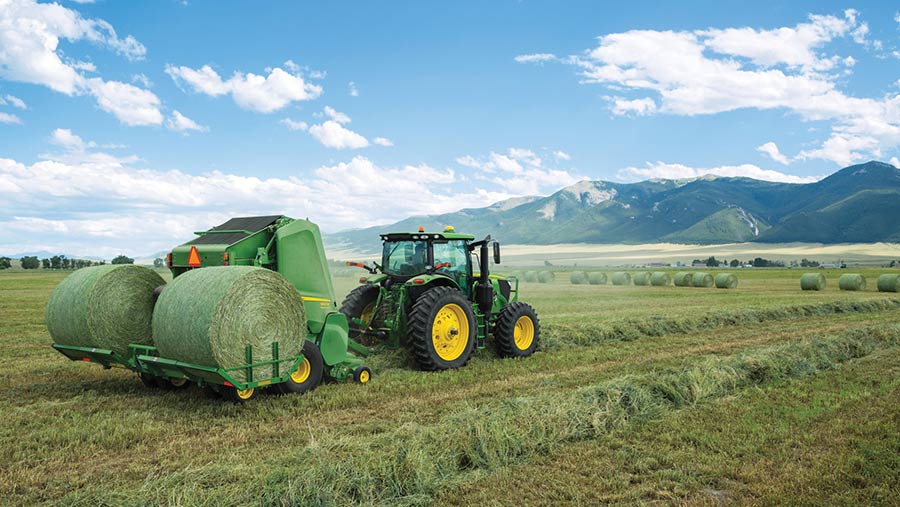 2. The Irish-designed Doyle Bale Buggy is built by German McHale dealer Tobias Hausser. With a chain-and-slat floor, it drops bales in pairs across the field. 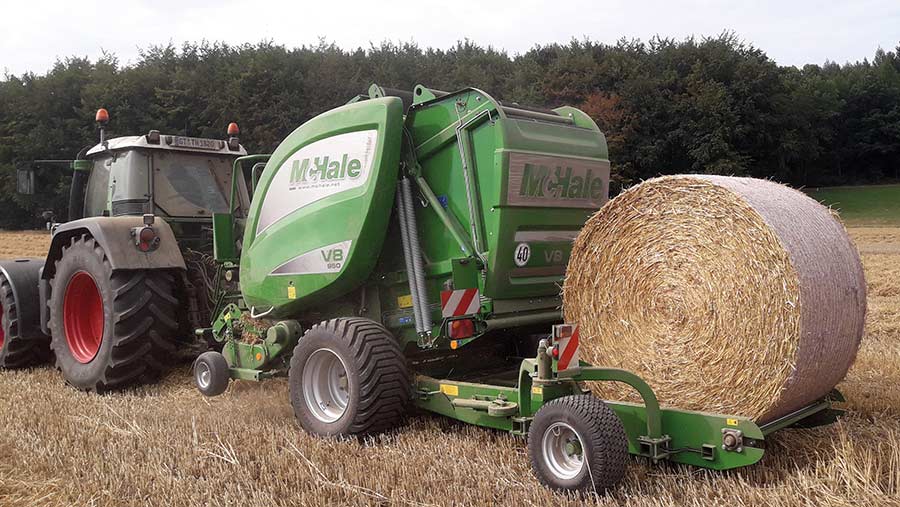 3. Suffolk framers Paul and Mark Hayward built a round bale accumulator that pairs bales and swings them through 90deg before dropping them so the loader doesn’t have to cross tramlines when clearing fields.