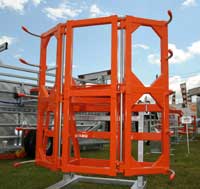 Ritchie has added a new bale grab to its line-up of bale handling equipment.

The Multibale handler, which can cope with two square or two round bales, uses clam-like spiked frames which close in on the bales to provide a firm, secure hold.

Used vertically or horizontally, features include an “open” frame which allows good visibility of the bales from the tractor and a geometry which opens the spike frames sufficiently for them remain clear of the bales as they are loaded.

Weighing just 290kg, the Ritchie Multibale handler is priced at £1625.