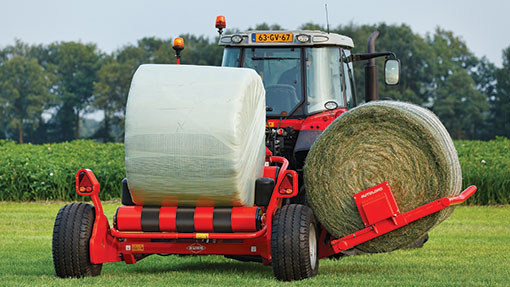 The pre-production E-Twin was delivered to Andrew Urch’s farm near Westend, near Nailsea, in May last year, just in time to start work on some of the first-cut silage he makes for his 100-cow milking herd, 75 followers and breeding ewe flock.

“The farm runs to about 90ha and we have mainly permanent pasture on the lower moor ground and there are areas we are able to reseed on the higher land that is closest to the farm buildings,” he explains.

“A contractor looks after our clamped silagemaking but we handle the baled grass,” he says, adding that having a mixture of baled and clamped silage provides a degree of flexibility when it comes to feeding the farm’s livestock.

However, Mr Urch is the first to concede that justifying the purchase of new baling and wrapping machinery for his size of farm would be difficult so the opportunity to extend their use by using them in a contracting business makes good sense.

The business offers a baling and wrapping service to customers and now sees upwards of 5,000 round bales being made by the farm’s John Deere fixed-chamber baler each year – 3,000 of them silage or haylage and about 2,000 of them hay.

Based on the RW1600C round bale wrapper, the E-Twin version retains all the key features of the standard build but with the addition of the double pre-stretcher unit. A trailed, self-loading machine, bales are lifted on to the wrapping table by a hydraulically operated arm – the bale is held by two side arms.

Equipped with a counterweight that gains its weight through generous use of metal in the left-hand axle, the wrapper can lift bales weighing up to 1,200kg and with diameters of 1.5m on to the wrapping table – the table comprises two rollers with three wide belts to rotate the bale as the table turns.

“Most of the build is pretty standard as far as bale wrappers go,” he says. “Although it should be said that the wrapping table is low so there is a good degree of stability when working on slopes. The lift arm works well and the high-speed rotation of the table makes for fast wrapping but it is the double pre-stretcher unit that sets this machine apart from the others.”

While the majority of wrapper manufacturers use twin satellite 750mm pre-stretcher units to speed up the wrapping process, Kuhn has developed a combined twin pre-stretcher unit positioned so they deliver film simultaneously with a two-thirds overlap, so the width of film being applied is about a metre wide, with 50cm of it double thickness.

The twin stretcher unit is just that – two units, one positioned 250mm higher than the other and both comprising aluminium rollers with cone-shaped ends to help prevent the film “necking”. The pre-stretch ratio at 90% as standard is higher than for the single, which is 70%, and despite there being two pre-stretch units, the rolls of film always seem to run out at the same time.

“Although I’ve never actually timed it, I would think we are working at a rate of about 60 bales/hour,” he says. “Bales can be wrapped on the move so the next bale is ready to be loaded as the previous one is being ejected.”

He points out that he normally applies four layers of film to silage and hay bales but increases this to eight when haylage is being wrapped – it’s whatever the customer wants, he says.

Once wrapped, the film is cut and the end retained in readiness for the next bale, and Mr Urch highlights that the double strength of the film ensures there is no tearing as the new bale starts to rotate and pulls the film off the pre-stretcher unit.

“There’s nothing worse than having to keep getting off the tractor to reattach a flimsy piece of film to the film cutter clamp,” he says. “The double film is just so much stronger.”

Once wrapped, the table tilts to the rear to place the bale on the ground on its side, although Mr Urch has opted to use a bale tumbler to place the bales on their flat ends, where there are more layers of film.

“Leaving them on the ends reduces the risk of damage from stones and makes handling them easier with the squeezer,” he says. “And we always stack them in the barn on their ends – it helps to keep their shape and prevent splits occurring.”