Farmers looking to invest in new drills or cultivation kit were given plenty of options at Lamma 2018.

Both big names and lesser-known brands were on display and we’ve rounded up some of the highlights below.

This year was the first time Lincolnshire firm Sly Agri had properly shown its Boss no-till disc drill at Lamma.

However, when owner George Sly brought one of the machine’s angled disc coulters to the show last year, it was enough to secure his first sale to a farmer in Essex.

So far that’s the only machine operating in the UK, but Mr Sly is running the demo machine (pictured below) at his farm in Lincolnshire and has been setting up a series of trials. 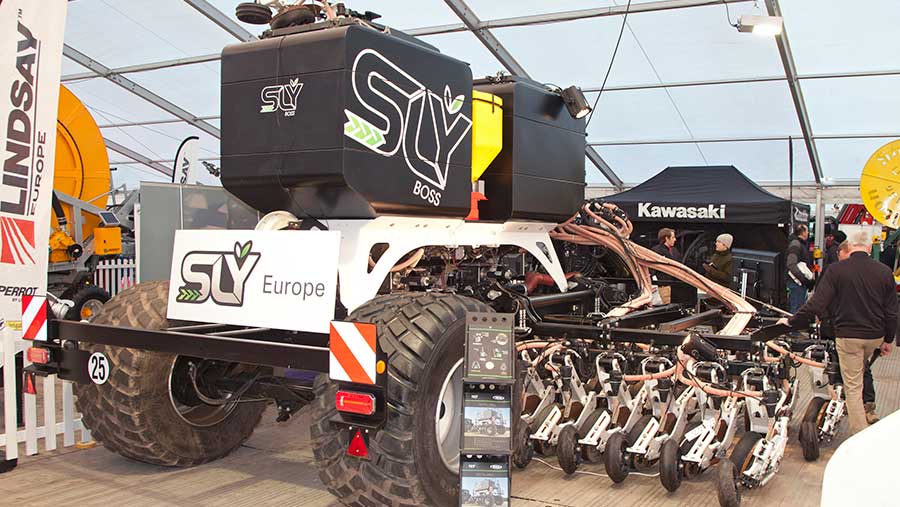 The machine itself is based on a coulter design by Australian firm Boss, which has been modified for European conditions. The rest of the frame is manufactured in France and various specs are available, including twin hoppers for seed and fertiliser (or two types of seed) and a front liquid fertiliser tank.

Sly has also developed its own liquid fertiliser metering system that’s controlled by a tablet via Bluetooth. The 6m demonstrator machine pictured is running twin tanks and has 32 coulters at 18.7cm spacings. As it stands, it costs about £75,000. 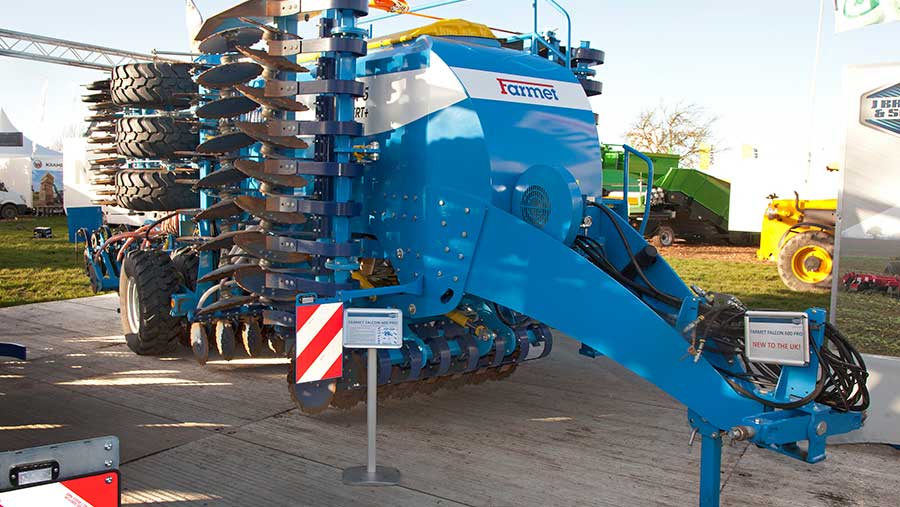 Farmers looking for an alternative to the popular Horsch Pronto drill might be interested in the Czech-built Farmet Falcon 6, imported by Essex dealer Brocks.

Like the Horsch, it has a twin row of cultivating discs at the front and a set of double-disc seed coulters at the rear. However, the drill can also be customised, adding a strip-till cultivator or set of tines in place of the discs.

The 6m demonstrator drill pictured is running the standard disc setup, with an extra row of fertiliser placement discs. As it stands it has a list price of about £90,000.

Brocks also offer the Farmet Triton, which does a similar job to Vaderstad’s Topdown.

Bolted together in Germany, the new drill places seed in two rows at alternate spacing, with the added bonus of dropping a trail of fertiliser in between the seeds. The company claims this allows adjacent seeds to feed from one fertiliser line. 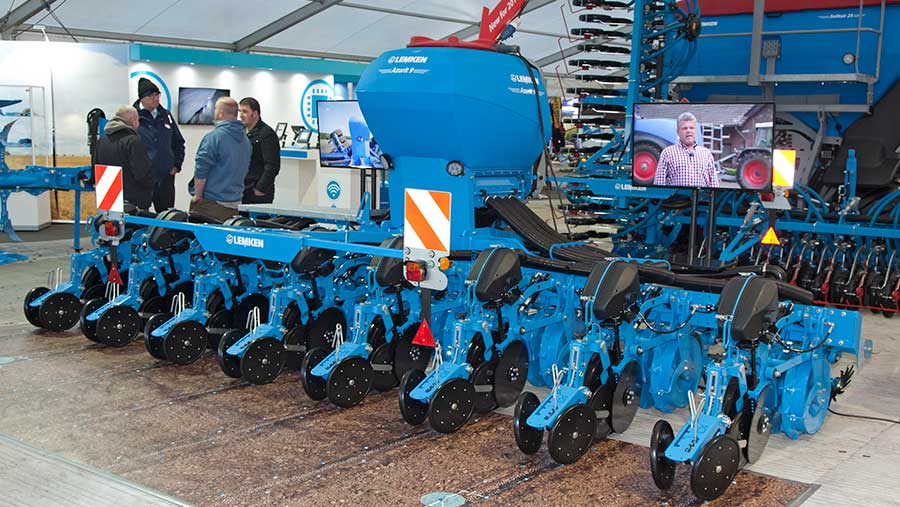 The Azuirt can also be connected to the rear of the firm’s Solitair cereal drill when the toolbar has been removed. This allows the standard 3t hopper to be used for fertiliser, while the 200kg Azuirt hopper can hold the maize seed.

Drilling speeds of up to 18kph should be achievable, with the drill available in 3m, 4m and 6m-wide models. Optional 50cm, 75cm and 80cm-row spacing is also available, along with manual depth and pressure control for each seeding unit. There’s a tramline feature and Isobus connectivity, too.

Lemken reckons the eight-row version will be the most popular in the UK – this has a list price of £62,312.

There was plenty of interest on the Opico stand as it showed a 5m version of the Optimal seeder from HE-VA, which is another tool in the struggle against blackgrass.

The seed-bed is prepared by the low-disturbance sub-soiling legs, which have compaction busting points on the bottom. A following V-profile roller then packs down the soil to create a bed for seed. 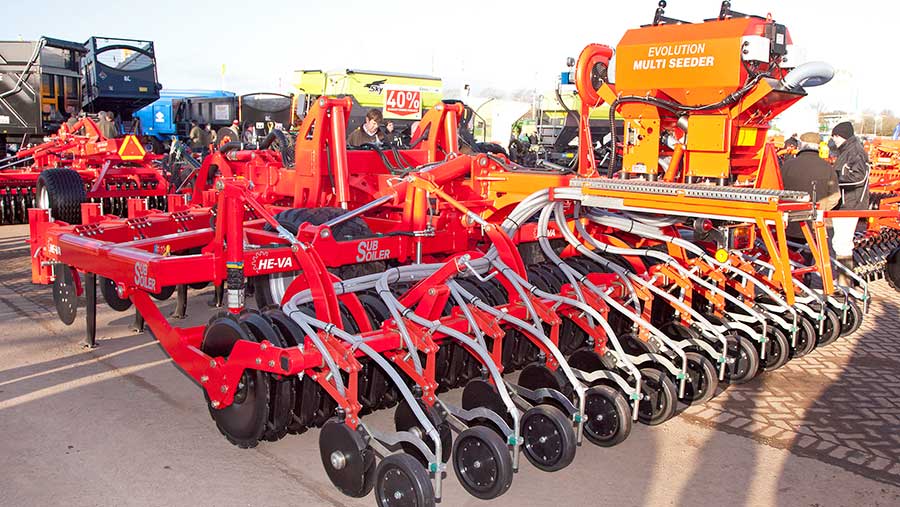 A disc is used to slice the soil surface before the seeding leg behind, with the HE-VA double-disc coulter placing the seed at the required depth, leaving no seed on the surface before being pressed down by a following rear wheel.

There’s an option to spread slug pellets at the same time using the HE-VA twin multi-seeder, all controlled from the same box.

Band-sowing specialist Claydon has built a tractor mounted to a hoe to remove weed competition in the empty space between rows of crop.

The new toolbar can be mounted on the front or rear linkage of the tractor, with speeds of up to 6kph achievable. The company says this job would normally be labour intensive and done by a rouging gang before harvest to remove weeds that may contaminate a seed crop. 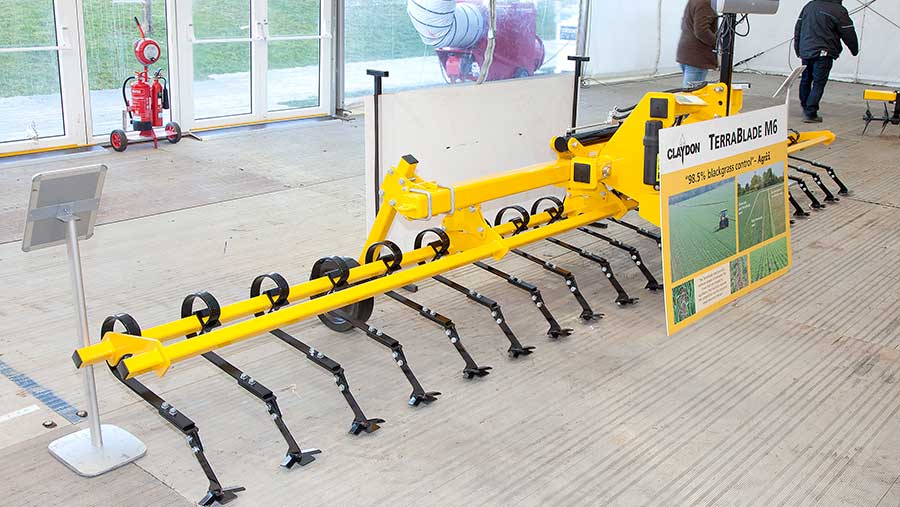 After trials with chemical company Agri, a 10% increase was seen when using the hoe as well as sprays, compared with applying chemical control methods alone.

Travelling through the crop in the spring, the hoe slices the head off the weed at about 1cm below the surface and chops through the roots so there is little hope of it surviving. If it does get going again, it should be easily outcompeted by the crop, we’re told.

Vaderstad fans had a new lightweight tine cultivator to eye up at this year’s Lamma show.

Called the Ferox, it sits somewhere between the Swedish maker’s shallow-working NZA and heavy-tined Swift in terms of its soil-bashing ability. 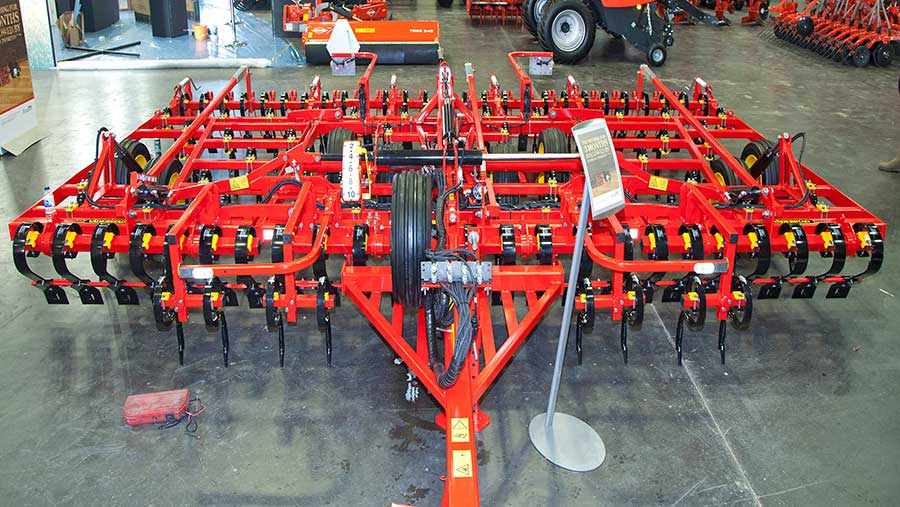 That means it has five or six rows (depending on the model you choose) of middleweight pigtail tines that work to depths of up to 12cm and vibrate to help break up the soil and flick crop residues around.

For those looking to do some additional levelling there’s the option of front and rear cross boards with hydraulically adjustable aggressivity. There’s the choice of a finishing harrow or crumbler roller to complete the job.

The firm’s other cultivator news includes a redesigned crosscutter disc for the Carrier. These have ultra-wide wavy edges meaning they will chop and mix across the entire width of the machine, even when working at shallow depths. They can also travel at speeds of 20kph.

After a takeover in 2015 by Elsham Wold Estates (which also owns Pipers crisps and Lincoln & York coffee), Yorkshire-based Sumo underwent an internal restructure and has reappeared with a fresh-faced look and a brand new cultivator.

Aimed at pinching sales from Vaderstad Topdown and Horsch Terrano buyers, the new Vaxio is the second attempt by the firm’s engineers at a primary/secondary all-round cultivator, which it says sits between the shallow-cultivating Mixidisc and hefty Trio. 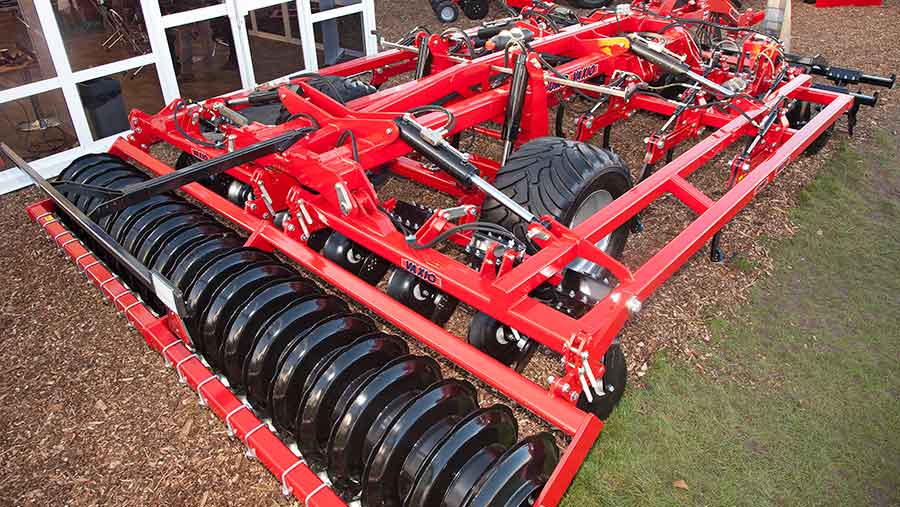 The 4m model at Lamma is the only one built so far and is set for testing this spring. It has two rows of meaty 20in discs at the front, followed by a further two rows of subsoiling legs, alternately spaced at 300mm centres.

Quick-release points are used for swift changing, with the model on show having hydraulic auto-reset legs and adjustable pressure if the going gets tough. Behind this is a row of levelling discs and a redesigned Tilso-made packer that is claimed to put more pressure through the ridges than the barrel, unlike the firm’s other options.

The operator can independently lift the front rows of discs, legs or the levelling discs out of work when they aren’t needed, changing a min-till cultivator into a set of discs or solely a subsoiler from the cab.

Proposed widths are 3m, 4m, 5m and 6m and as yet there is no word on price. Sumo reckons the 4m model demands about 250-horses up front.

Unlike many machines of this type that tend to work the ground with tines, the Baertschi Oekosem has a combination of fixed deep working legs and rotary blades to create strips of loose, fine seed-bed. 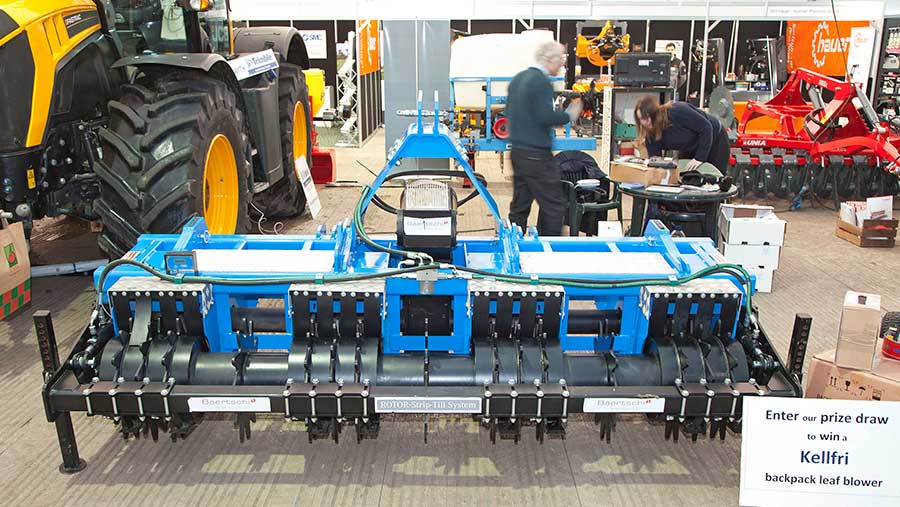 It’s designed to work directly into stubble and the leg can be pushed down as deep as 10in. Various working and row widths are available, depending on the task in hand, up to a maximum of 6m. It can also accommodate an array of different seeders and fertiliser applicators for direct planting.

To see what it can do, Mr Manfield has been running various trials with the 3m machine in conjunction with the Stockbridge Technology Centre. One of these has involved band sowing oilseed rape with strips of white clover in between. When the OSR was cut, he then used RTK guidance to replant with wheat, leaving the clover in place.

It’s still early days, but he hopes the clover will provide some nitrogen to the crops, improve moisture retention and reduce pesticide inputs.

Spanish firm Ovlac is continuing to expand its tillage range by landing a new disc cultivator on UK soil.

The implement has two rows of huge 24in discs set at a 21deg angle, which the firm claims is an ideal position for soil mixing. 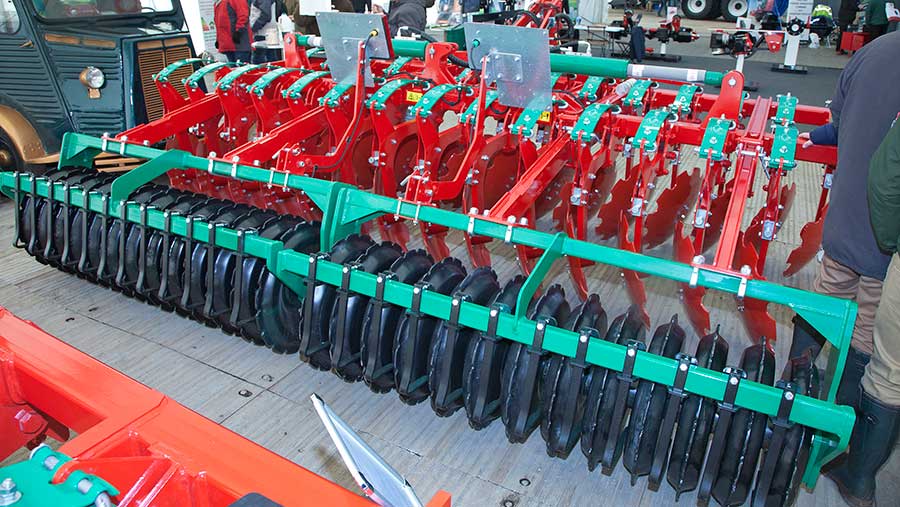 Each disc has a sealed bearing, which sits on the inside rather than outside of the disc, meaning it isn’t exposed to the trash thrown up by the next-door disc. Apparently, this will limit dirt getting inside and causing a bearing to fail.

Options range from 2.5m models for vineyards and orchards up to a sizeable 9.1m unit for larger acreages.

A leaf spring auto-reset system is standard with two discs on each spring. This lets each pair of discs move independently from the rest of the row, which is handy when covering different soils. Its recommended forward-speed is about 12kph.

Halse of Honiton imports the machine and a 4m model will cost £30,400.