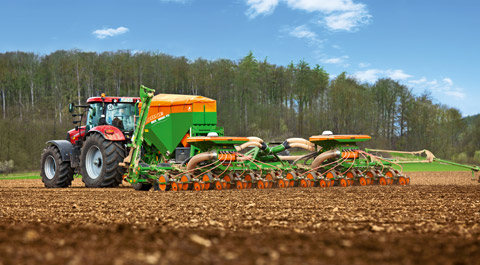 The tediously slow job that used to be drilling maize is being transformed by a new generation of machines that work with precision at much faster speeds. Peter Hill reports

Amazone, for example, believes its EDX precision planters can achieve workrates 30-50% higher than a conventional seeder thanks largely to being capable of working at speeds up to 15kph without detriment to its seed singling and placement precision.

Two newcomers to the market for this type of drill have both adopted electric drives for their seed metering mechanisms: Horsch says 12kph is a good average speed for its Maestro drills but set a new precision seeding output record operating at an average 15kph last year.

Operating in large, open fields in Russia, a 24m trailed Maestro clocked up just over 448ha of maize drilling in 24 hours.

Väderstad says that the 15kph top speed of its Tempo seeder can be used with a high degree of accuracy in the seed row.

Add in features that make these drills easier to set-up and quicker to refill, and the seasonal capacity that is important to contractors operating within a relatively narrow window has expanded.

The eDrive versions of the Accord Optima precision seeder, produced by Kverneland in tractor-mounted and trailed formats from 3-12m wide, avoid row overlaps by powering each metering cell wheel individually.

An electric motor and a toothed belt enclosed within a dust-proof housing drive the otherwise standard metering wheel under the control of Kverneland’s IsoMatch Tellus terminal.

Seed spacing (and therefore the rate per hectare) can be adjusted on the move and with the GPS receiver and GEOseed mapping software activated on the terminal, oversowing of areas already drilled is automatically avoided (as shown left) without any intervention on the part of the operator.

The Optima seeding unit is said to be well suited to electric drive because of its low drive torque. Also, it works with no friction or wear, and needs minimum maintenance.

The design also requires a low vacuum to select and hold single seeds effectively, with an adjustable scraper minimising the likelihood of seed “doubles” being delivered into the seed-bed furrow.

The latest addition to the Optima range is the 16-row TF Maxi, which has a 4,000-litre fertiliser cart and is capable of planting more than 100ha a day. 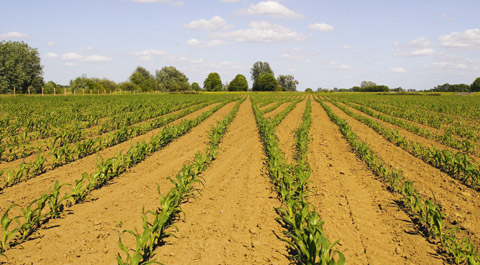 Opico has entered the sector with the six- to 12-row Gaspardo precision drills and the Great Plains Yield-Pro precision planter with its twin-row sowing system is being trialled this spring. Most ranges now include designs suited to min-till or no-till maize crop establishment.

The Amazone EDX precision planter is unusual in separating the singling and placement processes. Singling is achieved using a perforated drum located beneath the bulk seed hopper and serving a number of seeding units.

Each seed is then propelled by air down a tube that exits behind the furrow opener, where it is immediately pinned down by the Xpress catcher roller to ensure it stays put before being covered. 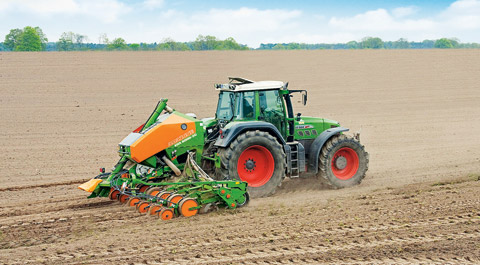 Individual row shut-off is a new feature achieved using powered flaps on the hopper outlet tubes that channel seed to the singling drum. Mapping the sowing process enables the Amatron controller to switch rows on and off individually to prevent double sowing where they would otherwise overlap in irregularly shaped fields.

Vaderstad’s trailed Tempo F high speed precision maize drill launched last year has been joined by a tractor-mounted version with a layout said to keep the centre of gravity as far forward as possible to make operation easier on relatively small tractors.

The Tempo T is available in six- or seven-row sizes with row spacing that can easily be adjusted from 600-800mm. A telescopic frame reduces overall width for transport.

Seed is planted by the same precision seeding units as on the Tempo F; they are mounted on a linkage suspension designed to maintain the working depth over an undulating field surface at high speed in conventional, reduced tillage and no-till conditions. 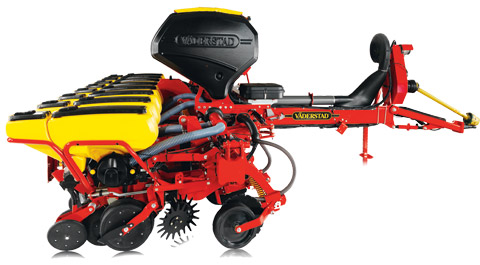 The Gilstring seed metering unit, named after the Vaderstad engineer that designed it, is a pressurised unit comprising a metering cell wheel and three disc-shaped singulating blades that can be adjusted to suit different sizes of seed.

A rubber wheel on the low pressure side blocks each cell as the metering wheel rotates, interrupting the airflow that holds the seed in place and causing it to be blown into the seed tube.

Each seed is then conveyed rapidly to an outlet just in front of a soft press wheel that stops it rolling or bouncing and presses it into the soil.

In laboratory tests, the mechanism maintained a very low percentage of misses and doubles as speed approached 17kph, in contrast to the rapid rise seen with conventional planters.

Operators can keep an eye on the performance of the machine in work thanks to individual seed monitoring.

This produces a display on the control unit showing seed rate, speed and an accuracy graph for each unit; and readouts showing a numeric representation of planting quality and coefficient of variation.

The trailed Maestro can be had with either individual 70-litre capacity hoppers for seed in sizes from eight to 12 rows or in larger sizes up to 24 rows with a “seed on demand” system using a central hopper within the fertiliser cart.

Bulk filling with the latter design makes seed replenishment quicker and easier. Seed is metered from the central hopper and is delivered continuously by air in individual tubes to a small container at each seeding unit.

When the seed level needs topping up, the air can flow through perforations in the container and bring seed with it; when it is full, the airflow is blocked and delivery interrupted. 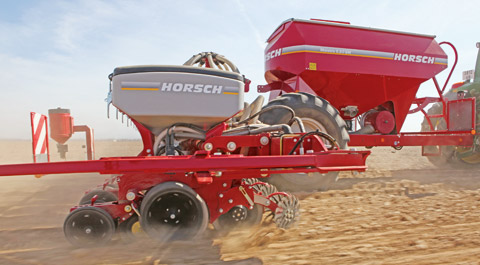 With few moving parts within the seeding unit, the company maintains that performance remains accurate over time.

Horsch has extended its range this year with the Maestro 12CC, which has individual seed hoppers and a 2,800-litre fertiliser cart. It drills 12 rows at 50cm spacing with standard coulter pressure that can be screwed up to 300kg using hydraulic adjustment.

Trash wheels in front of the fertiliser and seed coulters can be added for no-till or min-till operation.