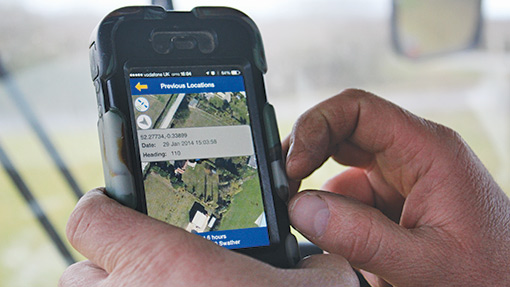 Farmers with a few men and machines on the books can find it tricky to keep tabs on their whereabouts. James Andrews looks at a system that makes the job a lot easier.

Farm and contracting businesses are getting bigger and more complicated by the day. That means more drivers, more machines and an ever-increasing logistical nightmare for the person trying to keep it running.

But as ever, technology has come to the rescue. Scores of manufacturers are now offering electronic systems – known as telematics – that help you monitor your machines from the office computer or smartphone.

Telematics is a system that pulls information out of a machine’s on-board brains and sends it to a computer or smartphone. In its very simplest form, it acts a bit like a GPS tracker, sending regular updates of a machine’s whereabouts back to the office. You will also be able to tell if the ignition is on or off and how many engine hours you’re racking up.

More intelligent versions give you a lot more to play with. With these, the boss is able to see all the information that’s available to the man on the seat and more. This includes fuel level, engine revs and it will even tell you how far he is through the job.

This now gives the gaffer power to see what all men and machines are doing at a given time, be it from his desk or even his temporary residence in the Rose and Crown.

Sounds expensive and complicated, but now there’s a retrofit system that can be installed – at relatively low cost – to almost any machine with a battery on board.

Cambridgeshire farmer Will Mumford is the owner of precision farming firm AS Communications and has been busy installing the retrofit telematics system on his machinery fleet.

This is partly to demonstrate the system to potential customers, but also helps him manage two full-time businesses at once. “I have to travel a lot with AS Communications, so it’s handy to be able to keep tabs on what’s going on back on the farm,” he says.

“When I was in the USA, I could see what all my machines were up to by glancing at my smartphone.”

So far, Mr Mumford has fitted the Trimble My Connected Farm telematics on seven machines ranging from a New Holland TS90 to a Hesston rape swather. He’s even considering wiring one into his Fergie T20.

The amount of information he gets back from the machine varies according to its age and complexity. On the older, more basic kit he’s using the system at a simpler level to monitor their whereabouts and keep a record of engine hours.

The farm’s Kubota mini digger is the smallest machine on the system, but probably the most nickable. If it does go missing, Mr Mumford can now log on to the My Connected Farm website or look at the app on his smartphone to see where it’s been stashed. The fact it records engine hours makes it easy to keep on top of servicing, too.

On some of the bigger machines he’s been able to glean much more information. The New Holland T6080 is the only machine on Mr Mumford’s fleet that’s got a Canbus connection (a plug that allows service engineers to extract information about the machine). By plugging the Trimble telematics DCM-300G modem into this, he’s now able to see all the machine’s information on his computer or smartphone. It will keep a permanent record of it, too.

Because it’s the main drilling tractor, the T6080 is also fitted with a Trimble FMX display and RTK automatic steering. This is plugged into the telematics box and means all the information from the screen is sent wirelessly back to the office.

This information can then be transferred straight into the farm’s Farm Works software. On the drilling tractor, he is recording and storing his seed-rates, field boundaries, A-B lines, GPS signal strength and his forward speed throughout the duration of the job.

He also gets a report of how much time the machine spends idling and in work. This is one of the most surprising readings and shows just how much time is spent stationary while carrying out a job.

How easy is it to install?

The system installed on Mr Mumford’s fleet is called My Connected Farm and it costs about £1,200/machine to install.

The brains of the system sit in the Trimble DCM-300G modem that’s slotted somewhere inconspicuous. This collects all the machine’s information, packages it up and sends it through the ether to one of Trimble’s servers.

There’s also a small GPS sensor plugged into the modem that has to be out of view.

According to Mr Mumford, the most important task is to mount the modem and GPS receiver where no one will find it. It’s also important to make sure the power supply is hidden – a crude wire on to the battery will soon be removed by thieves with more than a couple of brain cells to rub together.

The system can be installed on any brand of machine and they can all be viewed on the same screen. There’s also an annual subscription fee to access your information on the My Connected Farm website. This starts at £200/year for basic fleet tracking and goes up to £600/year for all services.