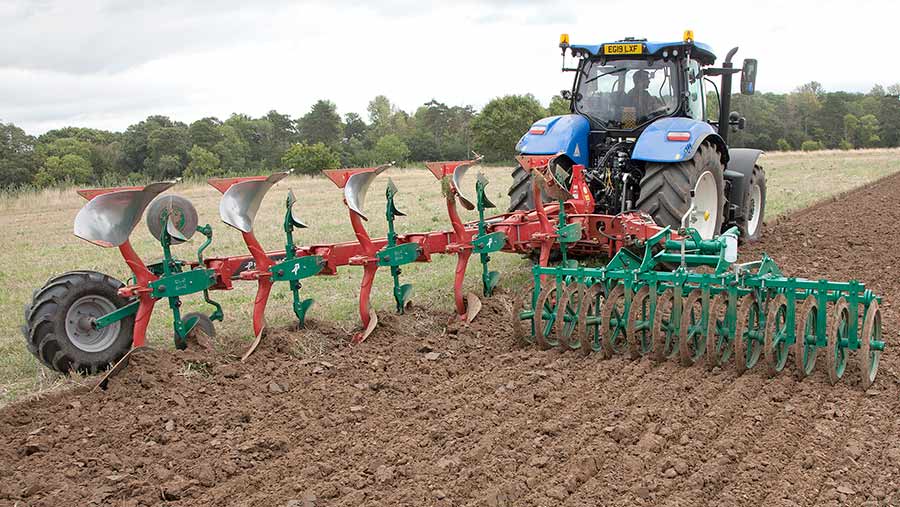 Kverneland’s iPlough has turned farming’s age-old soil folding implement into a computer controlled tool, capable of producing arrow-straight furrows at the touch of a button.

However, operators will need an instruction manual and a reasonable amount of computer savviness to unleash its potential.

Long gone are turnbuckles and pins, or even the need to plumb in multiple spools for width and furrow control.

Instead, it requires just one double-acting spool (or Power Beyond), with everything else dealt with via an Isobus connection to the tractor’s cab screen.

How does the iPlough work?

The iPlough, as its name suggests, uses an Isobus connection at the back of the tractor to display implement settings on the in-cab screen.

The default run screen shows settings for front furrow position, furrow width, rear wheel depth and pitch. Tapping on any one of these allows for quick and easy adjustment in 1cm increments.

Cleverly, the depth wheel can also be set to drop the back of the plough in the ground several metres after the front, which helps avoid leaving long furrow tails that can be hard to neaten up on the headland. 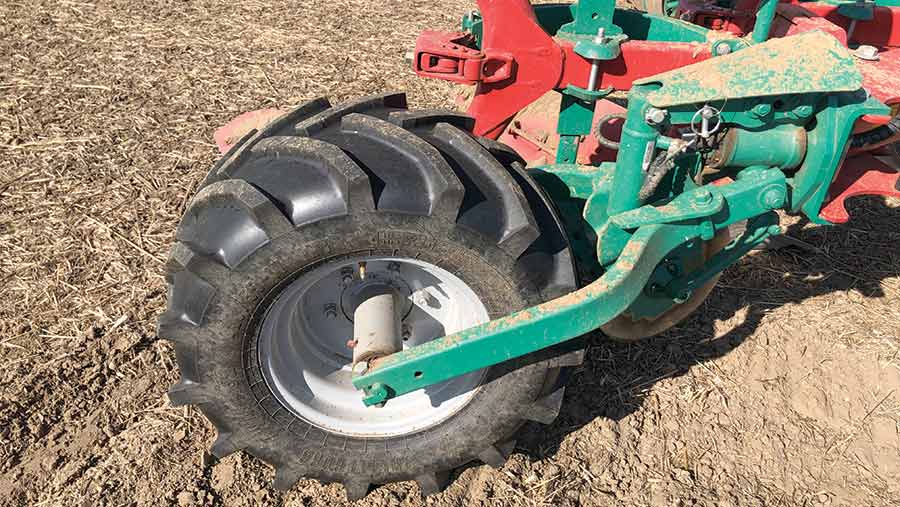 However, the caveat with all of these on-the-go alterations is that the plough needs a constant oil flow.

This can be achieved by setting the spool to constant pumping, but doing so drains tractor power and severely compromises lift capacity – to the point that the tractor might not be able to lift the plough out of the ground at the end of a bout.

It can also cause the hydraulic oil to get very hot, which eventually illuminates warning lights on the dash.

The solution for us was to strangle hydraulic flow to 20%, which was still enough to turn the plough over.

Another alternative is to only engage constant pumping when moving the rams, but this will mean the plough can’t constantly adjust furrow width, which is a major part of the iPlough’s appeal.

So the best bet is to use the tractor’s Power Beyond connection.

The system is now fitted to most tractors of a reasonable horsepower, and only pumps oil to the implement’s independent control valves when it receives a signal from the plough’s load sensor.

When no oil is required, it’s the equivalent of knocking the spool into neutral.

Buying the iPlough doesn’t necessarily guarantee die-straight furrows, though, because automatic furrow width adjustment is only available if the plough is purchased or paired with Kverneland’s Tellus Go (7in) or Pro (12in) in-cab screen.

This is because KV’s control box is the only version currently on the market, that is able to provide variable width section control, which is imperative for automatic width adjustment. 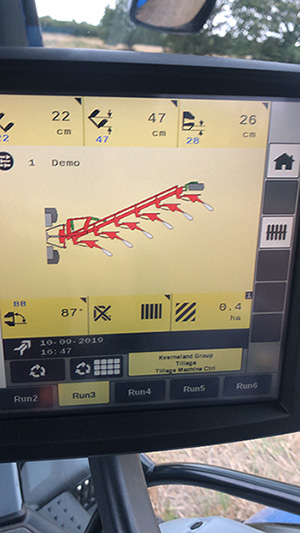 It also requires a section control GPS licence, as the system works by varying the ploughing width to get a straight line in the least amount of runs, regardless of tractor position.

This involves setting a target A/B line for the plough so that, as it is dragged along a wonky work line, it will open and close the furrows automatically, widening where it there is a greater gap and closing on concave sections.

The same logic is also applied to triangular shaped fields, where it gradually closes as it approaches the pinch point to reduce the amount of short work.

Of course, the problem is that if you don’t already have a Tellus screen on the farm, either with a fertiliser spreader, sprayer or Kubota tractor, then the £940 cost of screen and licence will have to be factored into the already high purchase price of the plough.

Deeper in the screen are tabs to engage pre-set positions. Road transport is the most useful, and activating it turns the plough through 90deg and drops the depth wheel to the ground.

There’s also a “connecting” setting that moves the main cross shaft to a parallel position, to make it easier to hook it on to the tractor’s link arms.

And the “marking” mode quickly orientates the plough to an angle ready to chisel headland lines.

Our test plough turned up with a Packomat, which is a clod breaker rather than a bonafide press – but leaves a neat job that can avoid a further pass with a set of rolls.

The unit weighs just 250kg, but can exert a downward force of 1,250kg because of the way it is attached to the plough. It also helps to balance the plough, particularly during the turnover process, and takes very little pulling because it takes pressure off the landside.

Kverneland offers just one model, equipped with single 600mm rings and front cutting knives, which we found did a decent job of slicing through clods on heavy land. For lighter ground, it doesn’t really make much difference to the finish left by the plough.

Attaching it can be a bit of a faff, though – unless you’re a dab hand at the job, it requires one person to operate the plough and another to manhandle the Packomat into position.

Experienced ploughmen may scoff at the iPloughs technology, but it still requires a degree of skill to produce a perfect finish.

In fact, the number of adjustments and ease with which they can be done might actually encourage lazy ploughmen to take more care over the job.

With the correct control box, there’s no doubt it can also help plough in a straight line but, sadly, that will do little to justify the steep asking price.

Our test plough was the five-furrow 2500 S. The letter denotes auto-reset protection so, if a shear-bolt protected version will suffice, then look for the letter B in the model name.

The headstock is rated to 280hp and the iPlough also comes in four- and six-furrow variants.

Universal No 28 bodies are standard – though up to six mouldboard styles are available – and they’re mounted on KV’s relatively new Aero leg, which was designed for the iPlough, but is now working its way down the rest of the firm’s plough range.

The leg is much slimmer than the previous setup to reduce the likelihood of material tangling and blocking in trashy conditions.

It’s also made from hollow heat-treated steel with 50% fewer welds than the old version, which has helped make it lighter and more robust.

Hydraulic vari-width is part of the package, too, so there’s no cheaper manual equivalent.

And our model had several of Kverneland’s other premium options, including quick-fit points and a neat skimmer adjustment system that involves loosening a central nut to move pairs of skim boards at the same time.