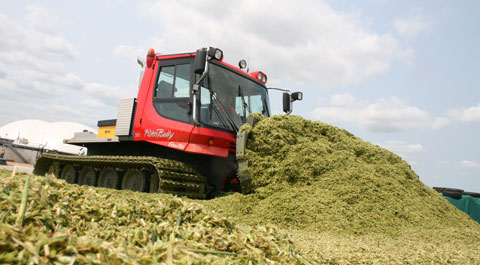 It’s usually seen at ski resorts moving tonnes of snow and creating perfectly groomed pistes, but PistenBully is now making a name for itself on silage clamps across Europe. Emily Padfield when to see the first one in the UK.

Watch the video and read the full test below

Silage clamps are dangerous places, and many a tractor has been overturned in the search for that perfectly consolidated heap.

For businesses that produce a lot of clamp silage, like Suffolk Produce near Woodbridge, health and safety is as big a concern as is coping with the output of the forager.

The firm clamps 45,000t of maize and wholecrop silage each year to feed it’s biodigester plant, explains Harry Kester, who works alongside business partner Mike Fielden. “Last year we had three people on the clamp, all working at the same time to keep up with our John Deere 7450i forager.”

The three machines were a John Deere 7930 with front linkage and buckrake, a JCB 414 S loading shovel and a Ford FW60, weighing 15t and fitted with a Strimech fork.

“Having all these three on the clamp at the same time was worrying to say the least,” adds Mr Fielden. “Add to that the cost of running three engines, having three lots of wages and three lots of insurance, and it amounted to an expensive operation.”

So the pair began to look overseas and to Germany in particular, home to over 10,000 digesters, for potential alternatives.

They found PistenBully Greentech, a subsidiary of the market-leading piste basher manufacturer PistenBully.

Seeing a market for second-hand machines from the slopes, PistonBully Greentech takes machines that have worked on the piste and completely overhauls them.

This involves reconditioning or in some cases replacing the engine, overhauling the hydraulic system and the updating the rest of the machine in a specialist workshop. A high-capacity air-cooler is bolted on for working in summer conditions.

“Although the machine may have done between 5,000 and 8,000 hours on the mountain, everything is reconditioned and each machine is sold ‘as new’ with a one-year warranty and full service back-up,” explains Mr Kester.

Powered by a 6-cylinder, 300hp Mercedes engine, the 11.5t PistenBully 300 has a low centre of gravity and can move 24t of silage in an impressive six shunts. “If you can manage to tip the trailer directly across the bottom of the clamp this can be as few as three,” adds Mr Fielden.

The 3m-wide machine is fitted with a 4.6m blade that has twelve functions, all controllable via a multi-function joystick in the cab, after a little practice. Each side of the foldable blade can adjust inwards or outwards, tilt backwards or forwards, and the whole blade can swivel as one, as well as tilting and crowding. This also means it can fold to a road legal width of 3m. To make the blade as responsive as possible, there’s a high-output 142-litre/minute pump.

The 86cm wide rubber tracks have five idler wheels and are unique to Greentech. With hydrostatic drive coming from the rear end, it is designed to exert pressure through the tracks using both weight and vibration, which creates a semi-compacted layer of 7-8cm on top for traction, with material below this completely consolidated.

The idea of having tracks on the clamp could seem alien to farmers and the machine’s consolidation qualities have been something PistenBully Greentech has been keen to demonstrate.

“When PistenBully started to show these machines to farmers and contractors in Germany, many didn’t think they’d be able to roll the clamp enough to make high-quality silage,” explains Mr Kester. “But six months later, after seeing the crop, they started to buy them.”

“To find out what density the silage was after rolling, we trawled the internet to find something that could tell us accurately and imported a core sampler from the US. Now we take regular core samples across the clamp to make sure we have the right density,” he adds.

“An ideal density is 225kg/sq m dry matter and our tests have showed that on wholecrop we can achieve 235kg/sq m. We wanted to be able to justify the performance to other farmers to show that it does work.”

On an average working day, the PistenBully burns just over 100 litres of fuel when taking into account waiting for trailers and changing fields. This is compared to 270 litres/day last year when there were three machines tackling the same task.

“We’ve worked out that the machine pays for itself in five years with the savings from fuel and labour, which is why we think it’s viable for contractors and large farmers – that’s why we have become the UK distributers and formed Off-Piste Agri.”

“It’s a lot of money to spend on a used machine, but the PistenBully is designed to work in extreme situations and not to go wrong. And if it does, we have a specialist team trained to PistenBully standards for service and warranty.

“The overwhelming driver for buying and now selling these machines for us is health and safety. For the 18,000 machines that PistenBully have supplied for the slopes, only three have had accidents, and these have been when they have been working on the mountain at night.”