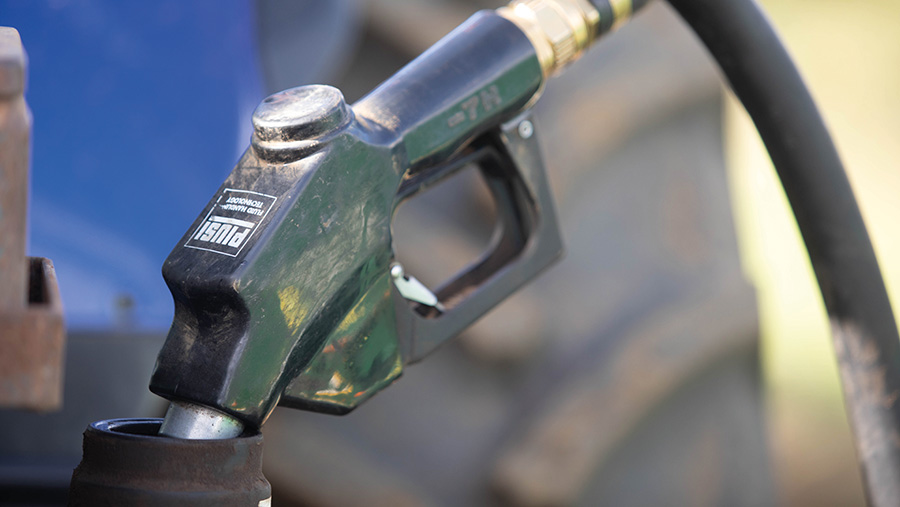 The legislation concerning rebated fuel is changing on 1 April and it will primarily affect those using red diesel for jobs that are on the periphery of agriculture.

While this has created an opportunity for everyone to reassess their fuel use, the good news is that if you are already legitimately using rebated fuel for an agricultural operation, it is most likely you can continue to do so.

The main alterations to the legislation remove the previously held distinction between on- and off-road uses.

Instead, it centres on “allowed” purposes using “allowed” vehicles and machines – two key factors that it is worth getting to grips with. Put simply, it means that a lot of non-agricultural industries are losing the use of red, including for off-road use.

Those in the construction industry, for instance, will only be able to use white diesel from 1 April.

It is agricultural businesses that carry out work for both “allowed” and “non-allowed” purposes that will be most affected.

Both HMRC and the National Association of Agricultural Contractors (NAAC) are trying to clear up as many of the grey areas as possible so everyone can be confident they are operating within the law.

There are two important considerations when working out if your business can use rebated red diesel and other rebated fuels from 1 April 2022.

Agriculture, horticulture, fish farming and forestry will retain the use of rebated fuel. It is therefore important to be clear that any work carried out is specifically for an agricultural purpose.

This is not necessarily the same as just doing work on agricultural land.

HMRC defines agriculture as “the growing and harvesting of crops for food, beverages, fodder, fuel or industrial purposes; or the rearing of animals for the production of food, wool, leather, fur or other substances”.

You can also use rebated fuel in agricultural vehicles when:

2. Is it an allowed vehicle?

Once a legitimate use can be established, it is important to confirm that the vehicle you are intending to use is allowed to use red.

Vehicles that will be allowed to use red include agricultural, special and unlicensed vehicles, and certain machines and appliances.

It is worth noting that after 1 April, they must only be carrying out an approved operation, not just working off-road, as is currently allowed.

A valuable reference point for whether something has an agricultural purpose can be found in the HMRC’s Excise Notice 75, Memorandum of Agreement (MoA).

This will be updated before 1 April, but we do not expect the definitions to change. Notice 75 will also be updated to include what constitutes an allowed vehicle or machine.

Until Notice 75 is updated, for reference, HMRC has recently published  interim guidance on these changes: Changes to rebated fuels entitlement from 1 April 2022.

What defines “agricultural use”?

Activities accepted by HMRC as falling within the definition of agriculture include:

Activities not accepted as falling within the definition of agriculture include:

Can an agricultural contractor use rebated fuel?

Provided a contractor is using an allowed vehicle or machine for an allowed purpose, they can continue to use red diesel driving to and from the farm, carrying materials or equipment needed for the job and removing waste resulting from the contracted work.

Can a self-employed contractor with a tractor and trailer use red diesel if employed by another contractor as part of the harvesting team?

Yes, as the contractor would be part of the harvest team, taking the produce off the field. This is an off-road operation integral to the agricultural operation that could not be done by a HGV.

No, this is currently illegal and will continue to be so from 1 April, as using dual tanks prevents HMRC from undertaking effective compliance checks.

I have heard that I can use red all the time, then if I do any non-agricultural work I can just pay back the tax. Is this true?

No. HMRC is clear that it is illegal to use rebated fuel for a non-allowed purpose – and if caught doing so you will be liable to prosecution and may have your vehicle or machine seized.

You must use fully duty-paid fuel, such as white diesel, when undertaking non-allowed activities.

The only exception to this is where HMRC may grant a licence to use rebated fuel if necessary to maintain an essential or critical service such as national security, law enforcement and human or animal welfare.

I have a digger that switches between agricultural and non-agricultural jobs regularly – what should I do?

HMRC suggests the most practicable solutions would be to either run all vehicles on white diesel permanently or have designated vehicles for allowed/non-allowed purposes.

However, it is appreciated that for many contractors and farmers this simply isn’t practical, especially given the increasing cost of machinery.

Therefore, it is vital that, if switching between allowed and non-allowed uses, you thoroughly drain the tank then flush it out with white diesel to remove all traces of red.

When doing so, you should retain all documentation to show:

That said, there is no guarantee that any of the above paperwork will be sufficient to avoid seizure of the vehicle if officers detect traces of red in a tank of white diesel being used for a non-allowed purpose.

We expect HMRC to be focused on enforcing criminal evasion and be looking for uses of red diesel in non-allowed operations.

I am currently using my agricultural tractor for construction work. In the future, will I have to switch my vehicles used on construction sites to white diesel?

Yes, and it will be important to ensure customers that may currently have access to red for use off-road are aware of the changes.

In quoting for new jobs, you should include the price of using white diesel and ensure customers are aware that the use of red will be illegal on construction sites, even when off road.

Golf courses and community amateur sports clubs (CASCs) can use red in their own vehicles after 1 April 2022. Can a contractor use red diesel when carrying out work on a golf course/CASC?

Red diesel can be used on golf courses and by CASCs in tractors that are kept on-site only. Special vehicles, such as mowers and diggers, may use red diesel in such settings, both when they are kept on site and when travelling to and from site.

Red diesel cannot be used on playing fields and sports grounds that are not maintained by a club that is registered with HMRC as a CASC.

Can I use red diesel if providing services to a domestic/private garden?

It depends on the service being offered and whether it is covered within HMRC’s MoA as horticultural use.

This includes “the cultivation and management of gardens (including vegetable plots, allotments and market gardens, but also flowerbeds, trees, shrubberies and ornamental lawns in public parks)”.

Landscaping and tree surgery do not meet the definition and must use white diesel.

However, you must also be using an allowed vehicle or machine when undertaking this work to qualify for use of rebated fuel.

Will I be able to use red diesel in my unlicensed equipment (such as a drainage trencher/digger) when engaged in agricultural land drainage contracting?

These are all allowed special vehicles and can use red if carrying out agricultural drainage.

This means the work done must be for the benefit of the agricultural land to be accepted as an agricultural activity.

Where drainage, or utilities such as telephone or electricity cables, cut across agricultural land, work involved in laying them (including repairing the land afterwards) or maintaining them is not an agricultural activity.

Can red diesel be used to harvest crops being delivered to an anaerobic digestion plant?

If you are involved in the main agricultural operation of harvesting the crops, you can use red diesel. If you are only undertaking a haulage activity, it must be fully duty-paid white diesel.

What are the rules of hedge and verge cutting, gritting and snow clearance?

After 1 April, agricultural vehicles, as defined within HMRC’s Excise Notice 75, may use rebated fuel for cutting verges and hedges on roadsides, for snow clearance, gritting and clear-up following flooding.

Can I grit on public car parks and private land?

An agricultural vehicle will be allowed to use rebated fuel for clearing or otherwise dealing with frost, ice, snow or flooding.

This covers highways, agricultural land and private premises (such as car parks). The tractor can also drive to and from the gritting job on the road using red diesel.

Again, if you are directly involved in an agricultural operation (such as baling), you can use red diesel. However, if you are just hauling forage/straw then you must use fully duty-paid white diesel.

The second haulage journey from store to a customer must be done on white diesel, unless you were involved in the baling.

Can I transport and spread compost to agricultural land?

Spreading compost to enrich the soil is an agricultural benefit. So if you are contracted to provide the relevant machinery and spread the compost, transporting the agricultural input is allowed on red, as it is incidental to the agricultural process.

If hiring out vehicles, machines or appliances that are used for both allowed and non-allowed purposes, the same applies as for users. The hire company will either have to:

It will be for the company to manage how it controls the type of fuel their customers use.

If they allow customers using their vehicles, machines or appliances for qualifying purposes to use rebated fuel, they will need to make sure that the machinery is not using rebated fuel if it is then used for a non-entitled use, to avoid it being liable to seizure.

I am involved in laying concrete bases for agricultural buildings/silage pits. Can I use red diesel?

This is construction and would therefore not be eligible to use red diesel.

Can a contractor drill game cover on red diesel?

Drilling and maintaining environmental strips would be classed as agricultural, as they are a means of promoting biodiversity on farmland and increasing natural predators, which in turn can reduce the amount of pesticides needed.

This comes under the accepted purpose of the “upkeep of agricultural land such as set-aside under environmental management schemes”.

However, if game cover was being put in for a commercial shoot it would be classed as “the breeding, rearing or keeping of any creature solely for purposes relating to sport or recreation”, which requires white diesel.

Also, if the environmental strip was solely or predominantly being used as a means of defending against flooding this would also not be an allowed purpose, and you would need to use white diesel when drilling and maintaining it.

Can I make hay on a horse paddock on red diesel?

Yes, as this is an agricultural operation, and the end use is not in the contractor’s control.

However, equine and horse yards are classed as leisure, not agriculture, in terms of fuel use and work carried out in and around the stables and yard must be on fully duty-paid white diesel.

The National Association of Agricultural Contractors (NAAC) is warning farmers and land managers that contracting prices will have to rise in the coming days and weeks.

“As fuel prices double and continue to climb, machinery costs spiral and labour remains at a premium for skilled operators, it will no longer be possible for agricultural contractors to retain static prices,” according to NAAC chairman James Bannister.

“Looking at the escalation in input costs, with spring work potentially only days away, professional contractors will have no choice but to increase prices to sustain their own businesses.”

In the past few days, red diesel has leapt from 80p/litre to well over £1 and is expected to continue on an upward trajectory.