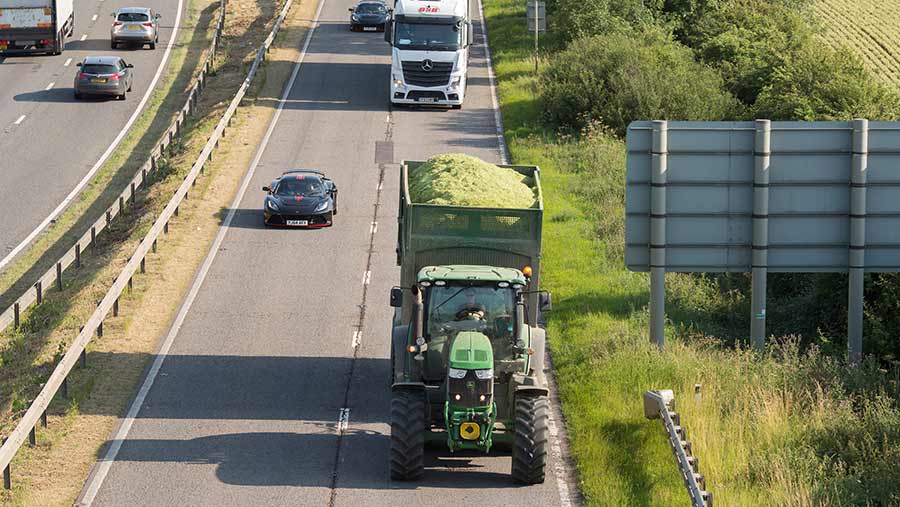 Tractors could be banned from certain A-roads in England because they slow down traffic and are considered a safety risk.

Highways England is proposing to change some A-roads and make them motorway standard.

This would involve the removal of traffic lights and roundabouts on A-roads to allow vehicles to enter and exit the carriageway through a slip road.

Cyclists, horses, pedestrians and mopeds would be banned alongside tractors in the new plans.

Jim O’Sullivan, chief executive of Highways England, told The Times newspaper: “It is absolutely a safety thing for a high-speed road network.

“Segregation of vulnerable users from high-speed traffic is a sensible thing to do. The key thing is to provide an alternative.”

The first A-road to be targeted for an upgrade is the A14 between Cambridge and Huntingdon.

The plans would see a ban on vehicles making right turns and also see a new six-lane bypass installed to the south of Huntingdon.

A Highways England spokesman said: “We are actively progressing plans to upgrade a section of the A14 to motorway. Our aspirations are to upgrade further A-roads in the future, which may include upgrading to motorway standard where appropriate.

“The A1 in the North East was recently upgraded and is now the A1(M) between Leeming and Barton.

“The improvements also include 11 miles of new local access road, improving safety for local traffic and the surrounding communities as well as providing an improved route for cyclists, equestrians and pedestrians. There are also 10 new bridges to help people more easily get from one side to the other.”

Other A-roads could follow over the next decade, including the A303 in Wiltshire, where the road will be put in a tunnel past Stonehenge. New sections of the A1 and A166 could also be given motorway status.

The government’s Road Investment strategy: 2015 to 2020 said these future expressway corridors are expected to be up to six times safer than the A-roads they replace.

Edmund King, president of the AA, said: “Designating A-roads as motorways can improve the flow of traffic and improve safety.

“Some of the most dangerous roads are A-roads, where you have cars travelling at 60mph-plus and other vehicles trying to make right-hand turns across fast-moving lanes.”

In September, the Welsh government revealed it is considering restricting opportunities for vehicles that don’t achieve a minimum speed to travel on the A55 – an 83-mile stretch of dual carriageway running between Holyhead and Chester.

The plan could involve banning tractors and farm machinery from using a major trunk road during peak hours.