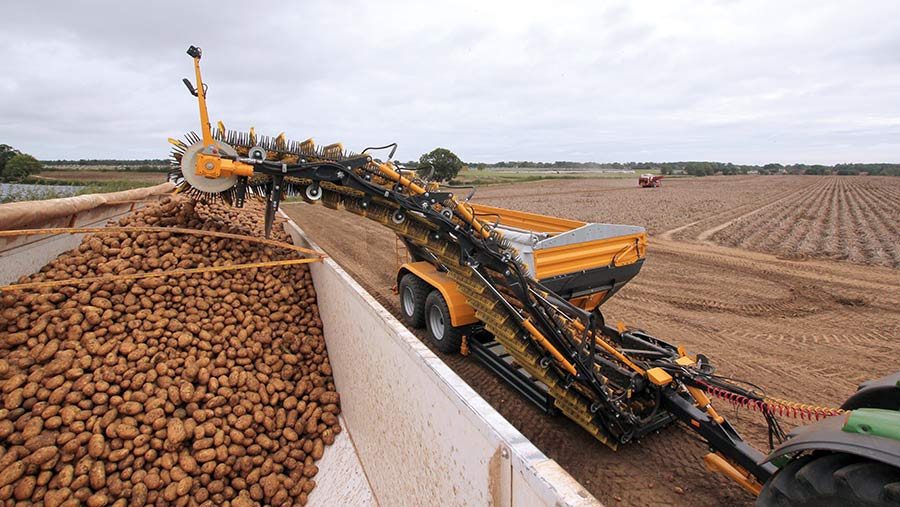 A Norfolk potato business has purchased a Brettmeister K3 transfer trailer for this year’s harvest in the hope of adding some extra slickness to an already efficient harvesting operation.

Over the past five years, Jon Daniels, director at Manson Green Farm, has been aiming to remove some of the risk and take better care of the 240ha of land he rents from nine landlords around Hingham, west of Norwich.

He previously used trailed harvesters loading into tractors and trailers to haul spuds back to a yard for grading ahead of storage or shipping. However, this method is labour intensive, costly and has plenty of risks attached.

These risks increase when conditions deteriorate late in the season, with narrow wheels on the harvesters potentially causing long-term soil damage. And when things get really wet, they tend to grind to a halt, whereas fancier self-propelled machines can keep on lifting.

With some help from potato handling specialist Tong Engineering, Mr Hicks also built his own root crop transfer system, using the discharge elevator from a Grimme GZ and a 14t bunker.

This was mounted on a tri-axle Larrington flatbed trailer, and when lifting in good conditions, it allowed 28t bulkers to be loaded straight off the field and hauled to store or the McCain factories at Scarborough and Whittlesey.

Where this wasn’t possible, the farm would revert back to tractors and trailers hauling back to a grading line to load the lorries. 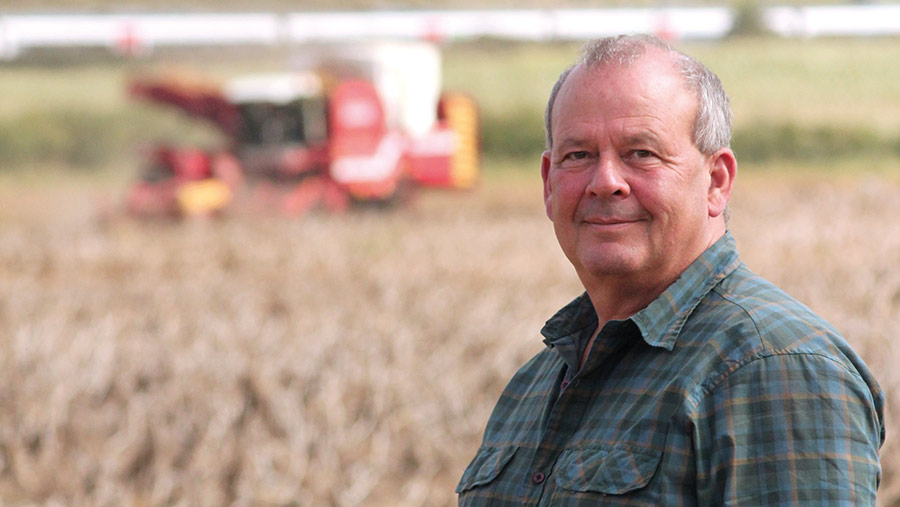 Mr Daniels was sold on the potential of crop transfer trailers during this two-year period and ended up buying the home-made version from Mr Hicks in 2017, along with his grading equipment.

This coincided with the purchase of a Grimme Varitron 270 self-propelled harvester and the hybrid system of chasing when the going was good, and grading at other times, continued until 2019, when McCain began offering its supplier base wholecrop delivery contracts.

The contracts allow growers to lift and deliver their whole contracted tonnage without grading and has been made possible by significant investment in robotic optical sorting equipment at the Scarborough and Whittlesey plants.

This enables the company to size, grade and remove unwanted material from delivered potatoes itself with almost no labour requirements, taking massive cost out of the supply chain.

“Crop transfer trailers are tailor-made for the wholecrop delivery system, and our harvesting costs are two-thirds less than when we were using tractors, trailers and a grader,” explains Mr Daniels.

“On top of that, we are no longer making a mess of the soil with narrow tyres, as we are completely low ground pressure from start to finish. And in the wet last year, we had fewer worries about mud on the road.” 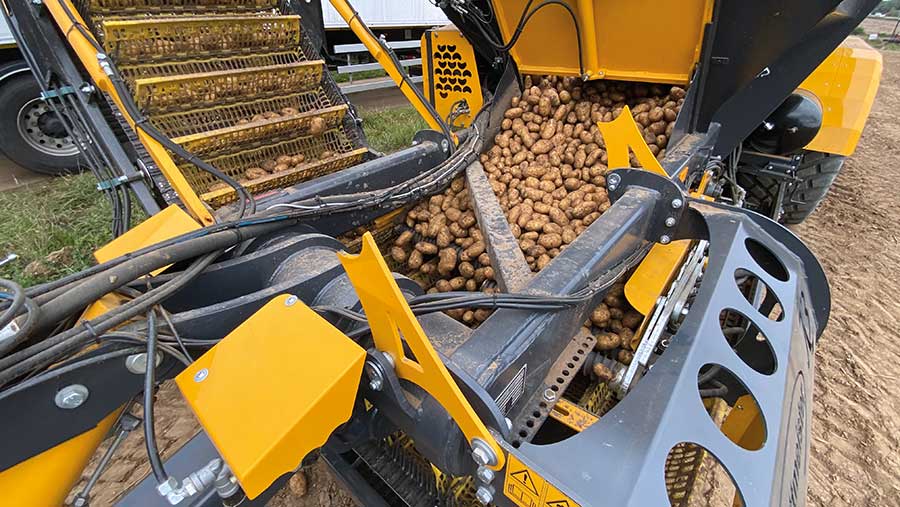 Mr Daniels wanted to replace it with a new machine and initially looked at sourcing the constituent parts to build his own chaser, which he calculated would cost about £100,000.

He also browsed the stands at trade and machinery shows like Potato Europe and Agritechnica for factory-made options, including the likes of the KUW 2000 from German manufacturer Hawe. However, this option was wrong-handed for a self-propelled machine and had a steel floor, which could increase bruising.

Then a chance conversation with Standen Engineering at BP2019 about the potential to use its elevator system on a home-made chaser revealed its machinery imports arm, Standen Imports, was about to take on the UK rights to sell Brettmeister crop-transfer trailers.

This soon resulted in a trip to the family-run engineering firm’s factory in Bavaria to see its machines in the flesh and decide if a potentially hefty investment was worth it.

“When I saw it, I wasn’t put off by the price tag, because the build quality was so much better than the other options we had seen,” says Mr Daniels.

Standen Imports now offers two Brettmeister models, the K3 and larger K4 (see “Brettmeister transfer trailers”). They consist of a rubber-lined bunker with a discharge belt that unloads the crop either onto a cleaning system and up the elevator, or out the rear if loading into store via a conveyor. This enables buyers to fit a grain auger to the rear of the machine and use it as a chaser bin during the combinable crop harvest.

The K3 model Mr Daniels purchased has an on-farm price of £136,000 and offers a single cleaning system that sits between the bunker belt and unloading elevator, rather than the K4’s two. This consists of 10 hydraulically driven rubber rollers that can remove up to 2cu m of unwanted material from each load.

The aggressiveness of cleaning can be set from the cab by adjusting roller speed, distance between rollers and pitch of the machine via its hydraulic drawbar and axles that move up or down.

Any small tubers, soil or haulm pulled through the cleaning system is then collected on a belt conveyer set up underneath the machine, with the contents discharged wherever the operator wishes, potentially limiting the spread of soil- or tuber-borne pests and pathogens.

Mr Daniel’s chaser operator, Aaron Long, has only used the machine in good lifting conditions so far and hasn’t needed to clean the crop aggressively.

It is hoped a change in bed system that leaves more space for sprayer wheelings will result in reduced wheel ruts and damaged or compacted beds, so aggressive cleaning of soil won’t be required in the majority of cases.

As cleaning slows the unloading process, this will allow Mr Long to focus on maximising efficiency of loading lorries instead.

With the Varitron 270 having a 7t bunker capacity and the old transfer trailer carrying 14t, the 18t capacity of the K3 also gives Mr Long a bit of breathing space when receiving a full load.

Being a purpose-built machine, he has found it easy to operate compared with its
predecessor, particularly with regards to reaching into bulkers to unload, and its in-cab terminal. This has a 7in colour screen that displays all machine functions and settings and offers simple button and roller toggle adjustment to tweak during operation.

Although crop flow from bunker to cleaning system and up the elevator is visible from the cab, Mr Long has four cameras giving him a fuller picture. These include the inside of the bunker, out the rear of the machine and underneath the cleaning system.

“There’s a slight problem with the positioning of the camera on the unloading elevator, as it’s mounted on an arm that doesn’t fold in for transport and is easy to catch and break off. We’ll try to find a way to reposition it without losing visibility into the bulker when unloading if we can,” he explains.

Another concern ahead of harvest kicking off this season was the K3’s hydraulic demand of 140 litres/min, as it would be using almost all the John Deere 6215R’s 155-litres/min capacity, but it has been found more than capable so far.

In the past few weeks, the farm has taken delivery of a second self-propelled harvester in the shape of a Dewulf RA3060. This investment, along with the new K3, has been made more viable by a McCain initiative that offers its grower base a 12.5% grant on new harvest equipment, which Mr Daniels has used.

The company is aiming to boost harvest efficiency in its supply chain, minimising risk in years like 2019, when about 10% of its contracted crop was left in the ground and it was forced to buy potatoes on a bullish open market to meet demand.

While the old home-built transfer trailer will be dusted off for now, Mr Daniels hopes to add another Brettmeister K3 to the fleet in its place soon, and reckons his team would then be able to turn around a 28t bulker in as little as 15 minutes.

With a potential combined bunker capacity of 45t between the two harvesters and two K3 transfer trailers, it would also allow for any short haulage delays and keep the machines moving.