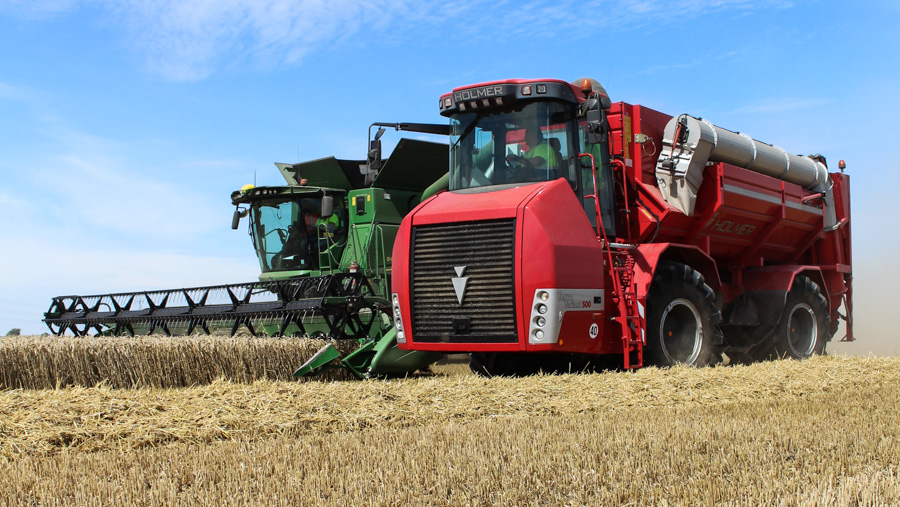 Last winter’s biblically wet sugar beet harvest had growers frantically scrabbling to get crops out of the field and, for Nigel Harrison, it was the nudge he needed to invest a six-figure sum in a huge self-propelled chaser bin.

However, to justify the outlay for his business, Harrison Agricultural Contracting, based at Nettle Bank in Norfolk, he had to be shrewd with the spec and make sure the machine had work lined up for nearly half the year.

The aim was to replace most of the tractor and trailer haulage work on sodden, rutted fields. The damage caused last winter to the soil, farm tracks and roadways had led to a number of his customers hinting that they were interested in a beet chaser on their ground to reduce compaction.

Mr Harrison has built three self-propelled sugar beet chasers over the past 30 years, but wasn’t up for investing the time and effort required to construct another, only for it to be retired after a couple of dry seasons. Instead, he intended to go down the ready-made route, but that meant lining up enough work to make it pay. 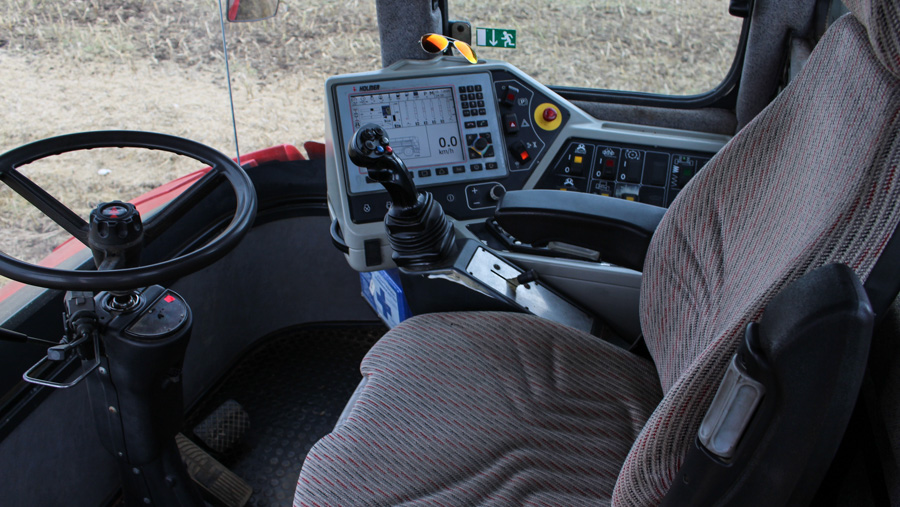 A multifunction lever handles most of the driving functions

“Wet seasons prompt a cycle to start and the reaction from both ourselves and our customers to a year like 2019 is to invest in equipment that helps get the beet off the field quickly and minimises tractor and trailer damage,” says Mr Harrison.

“However, a few subsequent easier-lifting years and customers start questioning the need for a big chaser bin and the extra costs attached, so it is then ditched – hence why this is our fourth model in around 30 years.”

His business runs Holmer and Grimme beet harvesters and, after sizing up a number of chaser options, Mr Harrison settled on a Holmer Terravariant with interchangeable grain and sugar beet hoppers for the rear.

The wheat hopper is a fairly rare item, so much so that his is the first one in the country. It works on a hook loader system, with the attachment stood on its four legs when not in use and the Terravariant backing underneath it to pick it up. The machine also has a three-point linkage, should Mr Harrison ever wish to use the 500hp for a bit of tillage work.

Pushing more than £500,000 for a new Terravariant with beet and grain bins was completely out of the question if the investment was to offer any kind of return. So, Mr Harrison had to be creative with the spec of his machine, which meant buying second-hand.

His is the lower-powered 500hp model – ample for carrying 20t of grain around – and he wasn’t concerned at the hour count on the machine, given that his team do all their own servicing and run a couple of high-houred John Deere 7530s and an older Cat Challenger in the fleet.

“I don’t believe machinery warranties on the first 5,000 hours carry much weight – it is the second 5,000 where you get the expensive issues,” says Mr Harrison.

“The Terravariant has a simple gearbox and a big engine, both of which are really accessible, so we’d happily change them down the line if that guaranteed another five years of use. Our last high-spec trailer cost £45,000, so machinery costs are just spiralling.” 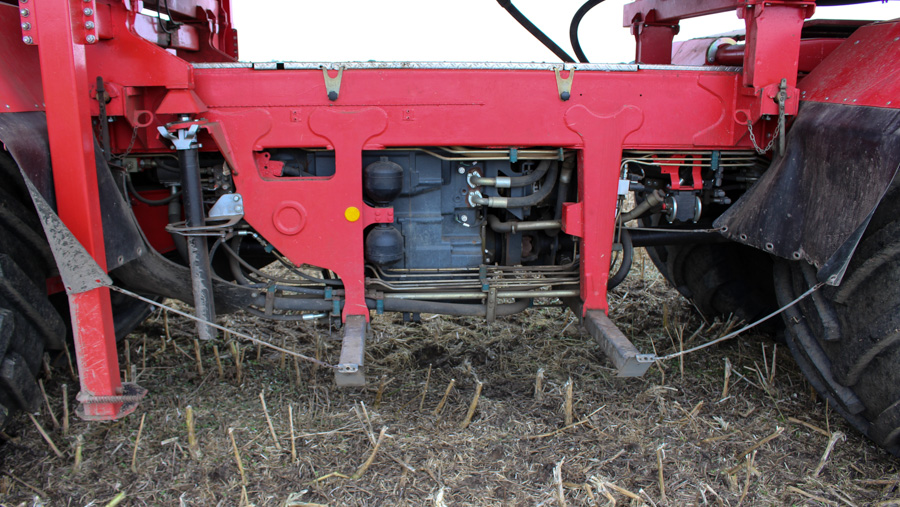 The gearbox of the Holmer Terravariant

Neighbouring Waldersey Farms was looking at buying a grain chaser bin to keep up with its five John Deere combines and reduce tractor and trailer numbers. Waldersey’s farm manager, Adrian Kew, quite liked the idea of the Holmer and agreed to hire it from Mr Harrison over the harvest.

He was also keen for Mr Harrison to use it at sugar beet harvest, where he thinks the farm will really see the benefits. Normally, Mr Kew employs Maus heaps on the roadside to outload the beet, but he wanted to limit the yield loss with beet sitting in trailer ruts and felt that getting it away on bulkers immediately could be the answer.

However, this extra use alone wasn’t enough to justify the purchase, so he signed up two of his biggest sugar beet customers, who also agreed to use the chaser to reduce compaction and hopefully keep the farm tracks tidy.

1990 – Magirus Deutz
Based on the chassis of a German Magirus Deutz lorry, Mr Harrison’s father built a bespoke cab to sit on the lorry frame and outsourced the construction of the beet body.

2005 – Big 8
This five-wheeled beast was the second chaser bin built by HAC at its Norfolk workshop. It used an Allison engine and, fully loaded, the Big 8 could carry 17t. However, it only lasted a few years.

2012 – Larrington/Terex ejector
Affectionately known as Nellie, the final chaser that Nigel Harrison built himself was the lovechild of a Terex TA30 dumper and Larrington ejector trailer. It was a six-wheel drive machine but had an extra trailing axle on the rear to help spread the weight even further.

The Larrington ejector could raise at the rear to tip straight into waiting bulkers and had added air suspension all round. It was used for about three years, but was due a gearbox replacement and some customers had questioned the need for it, so it was retired and the trailer unit still sits in Mr Harrison’s yard.

2020 – Holmer Terravariant
The 2010 Terravariant with 8,000 hours on the clock can carry a 20t grain hopper or sugar beet bin. It runs a 500hp Mercedes engine and Funk powershift gearbox.

So far, the machine has been on the oilseed rape and wheat harvest, running alongside three combines, and early indications show it can unload its full 20t of grain in two minutes – twice as fast as the combines. However, the combine’s spout has to be fully opened before the chaser pulls alongside ready for unloading, as there’s a very small height difference between the two.

The machine can crab steer down the field and covers a width of 4.2m in one pass, with the 1050/50 R32 tyres keeping compaction to a minimum. It also has an adjustable spout end, similar to CNH combines, which means trailers leave the field brim full, limiting spillages and part loads.

Matt Starling, who runs the combine teams at Waldersey, says it is good at keeping trailers out of the field, but the bin could be a little bigger and a roll-over sheet would be handy for showery days. If all five machines were run together, they’d probably need a second chaser to keep up too. 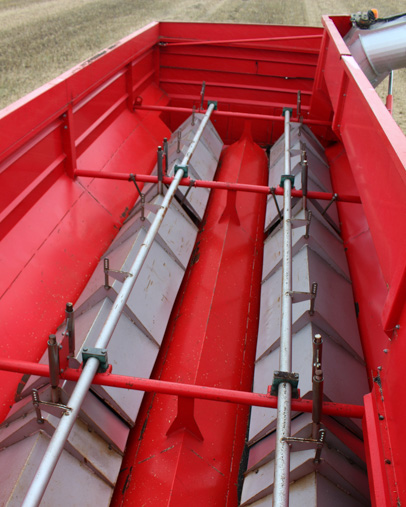 “It coped fine in OSR with three machines, but as the bin is only 20t, it can struggle when the combines aren’t together. Output of three machines combined is about 180t/hour, so we’re almost always unloading from one of them,” says Mr Starling.

“We plan to use it to keep the lorries going as it can load straight into them, while our tractors and trailers will run the grain back to the stores.”