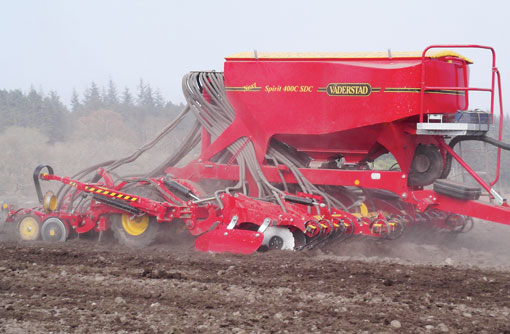 Growers in Scotland who like to put down some fertiliser with their cereal seed will welcome the  the Spirit Next System Disc Combo (SDC).

Using standard components throughout, the SDC version of Väderstad’s light-to-medium soil disc-based seeder will apply fertiliser separately from seed across its full working width, as on the Rapid Combi, or into the seed row, which the Rapid Mixed drill achieved.

“It could also be used for under-sowing cereal crops with grass, or for drilling cereal/forage combinations, such as peas with barley,” notes Michael Alsop of Väderstad. “Another option would be to apply fertiliser with oilseed rape to give the crop an early post-germination nutrient boost.”

The new seeder variation is based on the Spirit Next (above), the second-generation model of the drill that features upgrades such as the corrosion-proof, electrically controlled Fenix II seed metering system, which is capable of handling rates of less than 1kg/ha.

Another change, the TriForce cushioned rubber mounting for the coulter assembly, exerts higher coulter pressure than before to improve the machine’s capabilities on heavier soils within the Spirit’s range.

For the SDC version, the machine gets a divided 3,900-litre hopper with 1,925-litres of seed capacity at the front and 1,975-litres of fertiliser at the back. Each section has its own Fenix metering unit and externally mounted air distribution head.

“Fertiliser is delivered forwards to steel tube coulters mounted on the arms that carry the System Discs,” Mr Alsop explains. “Spaced 125mm apart, they place the fertiliser in a band approximately 25mm wide and 25mm deep – in and around where the seed is placed, in other words.”

This approach avoids seed burn, but delivers nutrition where and when required, he emphasises. The seed is delivered to the twin vee-disc openers at the back of the drill – aft of a row of soil consolidating tyres – as normal. 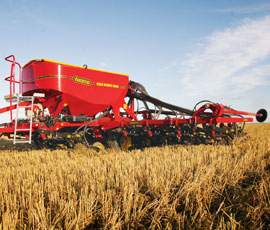 The new low-rate seed metering system installed on the Spirit Next SDC is also fitted to the 4m, 6m and 8m Seed Hawk (right) tine direct drill as part of a package of improvements and upgrades.

It is said to be easier to calibrate and consistent in service, has high and low gears to suit different seed sizes, and a flap for closing off the hopper so that the metering package can be worked on when there is seed in the hopper.

In-cab coulter pressure adjustment makes it easier for the operator to fine-tune sowing performance in the field, according to soils and conditions.

The new mechanism, which can be retro-fitted to Seed Hawk drills already in use, has 20 programmable steps and can result in more precise sowing depth, says Väderstad.

Elsewhere, the drill’s fertiliser knives have been reinforced with double-wearing steel for increased service life – another upgrade that can be installed on existing versions of the drill, while the layout of the UV-resistant black seed and fertiliser hoses is said to have been improved.

A broader, tractor tread tyre is available, with increased surface area to reduce soil compaction and improve the drill’s ability to cope with wet soils.

On the Väderstad Rapid A 400S disc seed drill, central hydraulic depth adjustment – and Interactive Depth Control – is a new option. Together, these features enable the operator to adjust depth on the go to suit soil variations across a field.

The system uses a master hydraulic cylinder and secondary cylinders for wing sections; the hydraulic circuit is automatically self-compensating and, with every lift, is re-calibrated for consistent depth across the working width.

Cirrus can take the pressure for more consistent sowing 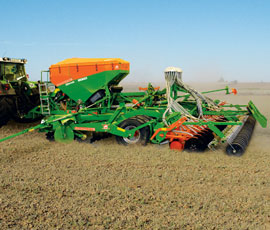 The discs are now serrated rather than plain as standard, to give a more intensive cultivation effect, which is also achieved by setting them at a shallow angle to the direction of travel, but canted over more than usual to make the most of the notched profile.

Behind the discs, the specially profiled packer tyres have three ribs positioned to provide the greatest consolidation effect in line with the two rows of single disc coulters, which come at 125mm or 166mm spacing.

Up to 10% more pressure can be applied to the RoTeC+ coulters thanks to the revamped design of the Control 25 depth regulating rollers positioned alongside.

These 25mm-wide flexible plastic discs, which regulate depth at the point of seed release rather than a little way behind, as with most designs, also keep the coulter disc clean in sticky soils.

They have been uprated to support the increased pressure, while still keeping seed placement at the required depth. As before, manual adjustment sets the coarse depth; centrally adjusted coulter pressure then refines the sowing depth according to prevailing soils and conditions.

Harrow pressure is adjustable separately from the coulters, which is said to be an advantage in, for example, damp sowing conditions.

Much the same improvements (cultivation discs apart) are also found on the Cirrus Activ, which incorporates a rotary power harrow to complete seed-bed preparation. 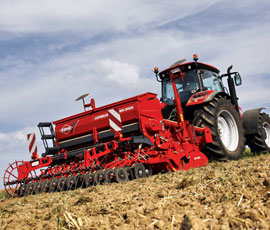 Installing disc coulters gives added versatility to power harrow mounted seed drills because they can work on trash-laden min-till seed-beds as well as more thoroughly prepared ground that has been ploughed.

Kuhn and Pöttinger are among the latest manufacturers to adopt this approach, developing their piggy-back drills to take a double-disc coulter design that places one disc slightly ahead of the other to give a keener cutting edge that should enable them to cut through surface trash effectively.

In both cases, the coulter assembly includes a narrow press wheel to firm soil over the seed and provide close-coupled depth control.

The Seedflex coulter bar, with double discs at 125mm or 150mm spacing, is a new option for the Kuhn Sitera (right) mechanical seeder. At 3m wide, it fits the power harrows of the same size in the HRB 303, HR 100 or HR 1000 series.

With seeding depth largely governed by the packer roller, no adjustments are needed when cultivation depth is changed.

The double-disc coulter design now available on the Pöttinger Vitasem (below) mechanical seed drill, which comes in 3m and 4m sizes, is normally seen on the company’s big trailed seeders. 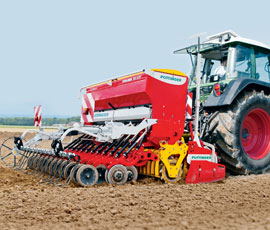 Up to 50kg of pressure can be brought to bear on the discs to help penetration in heavier soils, with even pressure distribution helped by using coulter arms of the same length, but on a staggered rail.

This gives a degree of soil and trash clearance, which is also helped by each disc housing having its own inboard hub containing sealed bearings.

Seed is dispensed from a tube positioned in front of the disc axle and bearing – a location that gives the seed time to fall to the bottom of the slot before it closes when working at a fast-forward speed.