UK farmers and contractors are spoilt for choice when it comes to picking a self-propelled sprayer, with scores of options from both home and abroad.

Interested punters could compare everything from the super-lightweight Kellands Agribuggy to the high-output, heavy-duty Challenger Rogator.

Tyre-maker Trelleborg was also on hand to measure the working weight of each machine and provide advice on selecting the most suitable tyre types and pressures for the job. 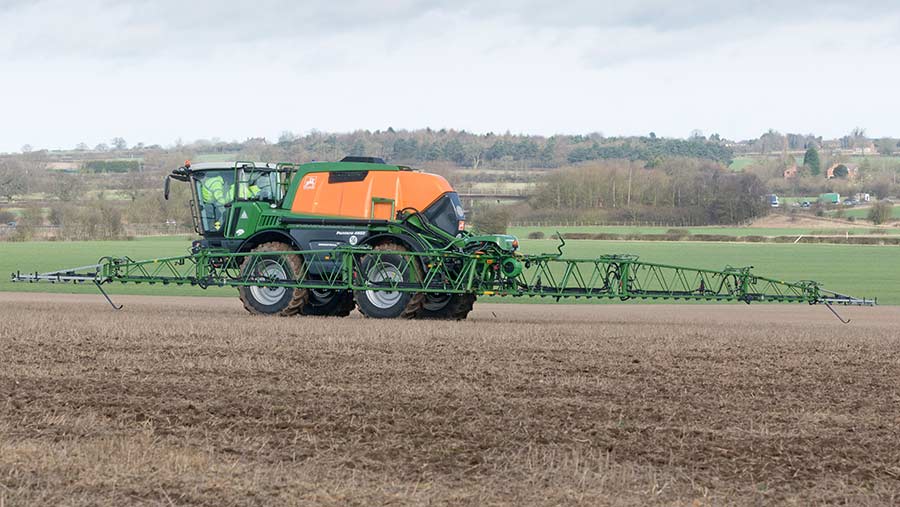 Amazone’s updated Pantera 4502 sprayer first put in an appearance at the Lamma show in January and now production models are making their way on to UK farms.

The main change is a switch to a Tier 4 Final version of the 218hp Deutz six-cylinder motor, which means buyers will have to get used to filling it with Adblue.

It’s also had the bowser fast-fill pipe moved from the side to the front – for easier filling through a gateway – and LED lights are now standard at the rear and available as an option on the front.

As with the previous version, there is just one hydrostatic-drive model that comes with a 4,500-litre tank and several boom options – from 21m to 40m.

For those with plenty of steep terrain to tackle, there is the option of fitting lower-geared hubs. However, these reduce the top speed from 50kph to 40kph.

Since Amazone launched the Pantera in 2011, it has sold about 85 machines in the UK. 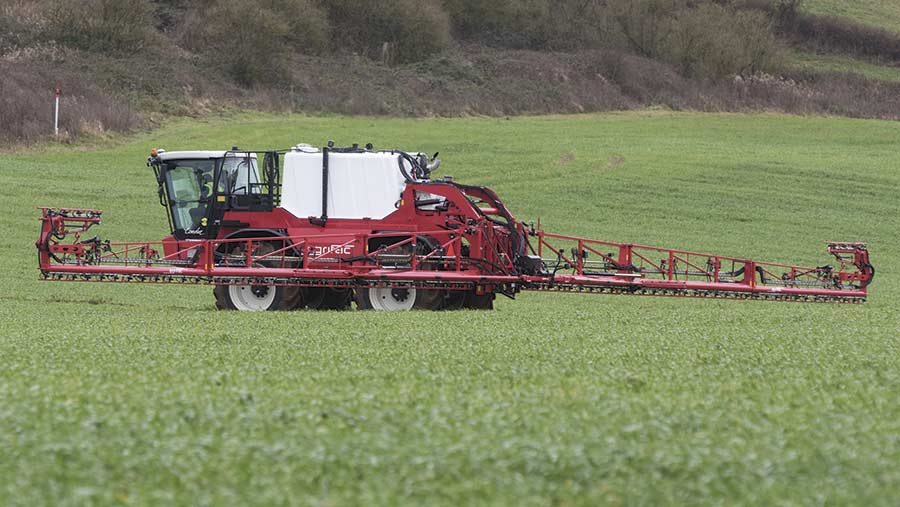 The smaller Endurance comes with either a 4,500- or 5,000-litre tank, while the Endurance hauls around a hefty 8,000-litre version.

Despite the whopping tank, the Endurance is only 90cm longer in the chassis than the standard version and uses many of the same components.

The standard Condor is now on its fourth generation, which is powered by a 285hp Volvo six-cylinder engine. This drives four hydrostatic wheel motors that hang off the maker’s articulating Stabioplus chassis. It also has air suspension all round.

Recent updates to the spray pack include a system called HTA that can vary spray droplet size without changing nozzles. Boom sizes range from 36m to 40m. 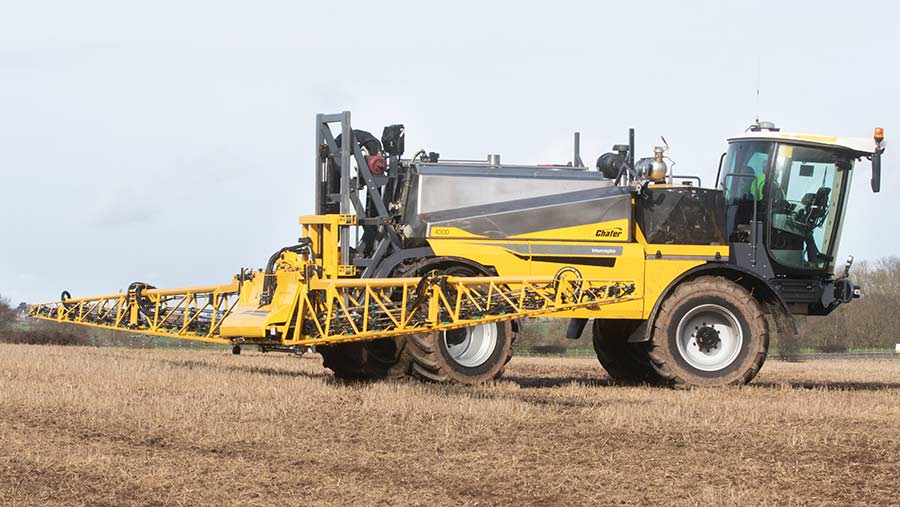 Having fitted spray packs on other maker’s running gear for years, Chafer has built a machine to its own specification.

The Interceptor is based on a skid unit built by UK engineering firm Redcad that is powered by a 215hp Deutz six-cylinder engine. This drives a Bosch Rexroth CVT transmission, which Chafer says uses less power than a standard hydrostatic wheel motor.

At the moment the machine has a fixed 80in (203cm) wheeltrack, but there are apparently plans to build a variable-width chassis machine in the near future.

In the spraying department, Chafer has fitted the Interceptor with a 4,000- or 5,000-litre stainless steel tank and there is the option of booms from 24m to 36m.

So far there is just one demonstrator machine operating in the UK, but the maker is ready to take orders now. 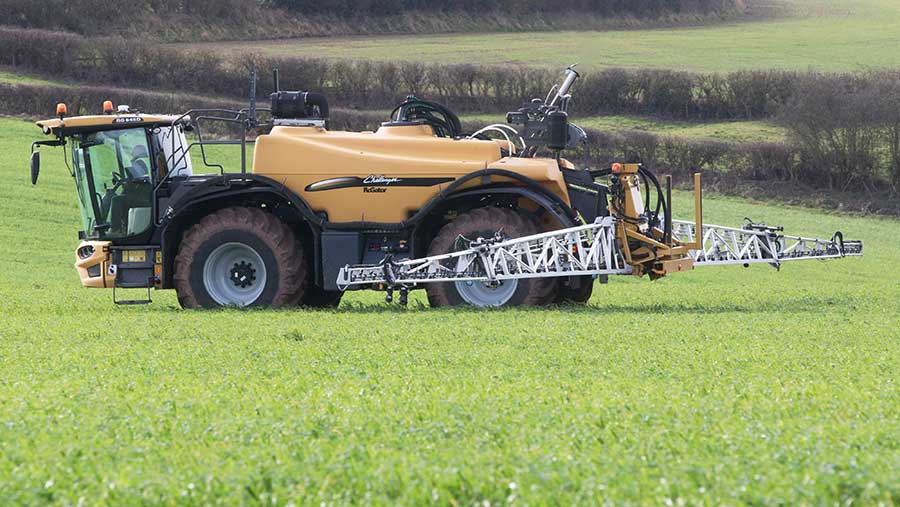 Challenger launched its first A-series Rogator back in 2010 and now the maker says it has more than 160 of the monsters operating in the UK.

The D-series is the latest incarnation and the popular 645D model was available for punters to drive. This is the second-largest machine in the three-model range and it comes with the option of a 4,000- or 5,000-litre tank.

Updates for the D-series include a slicker cabin that is fitted with Agco’s own rate controller, rather than the Topcon unit used previously.

Boom upgrades mean there are 1m sections on all machines and there is the option of dual-select nozzles, which means its single spray line can effectively operate as a twin-line machine. 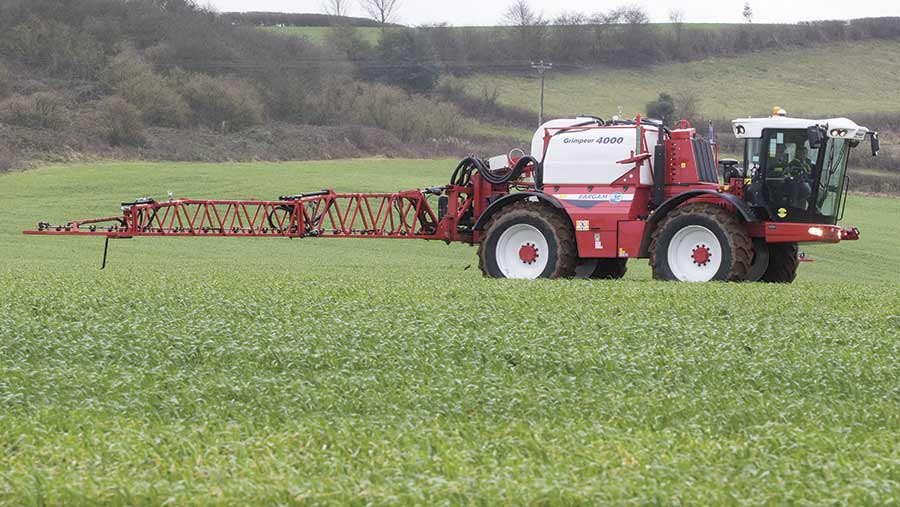 One of the few mechanical-drive self-propelled sprayers on the market comes from Italian firm Bargam, through UK importer Cleveland Crop sprayers.

The Grimpeur L is one of the more popular models in the UK and comes with a 4,000-litre tank and boom options from 24m to 36m. Smaller tanks are also available from 2,500 litres.

Recent updates include a Tier 4 Iveco 230hp engine that sends power to the mechanical axles through a four-speed hydro-mechanical gearbox.

Bargam says this set-up, combined with tall 520/85 R35 boots, means it climbs well and keeps going in the wet.

On the spray pack there is a Muller spray controller with 7-20 section control and a 400-litres/min pump comes as standard. 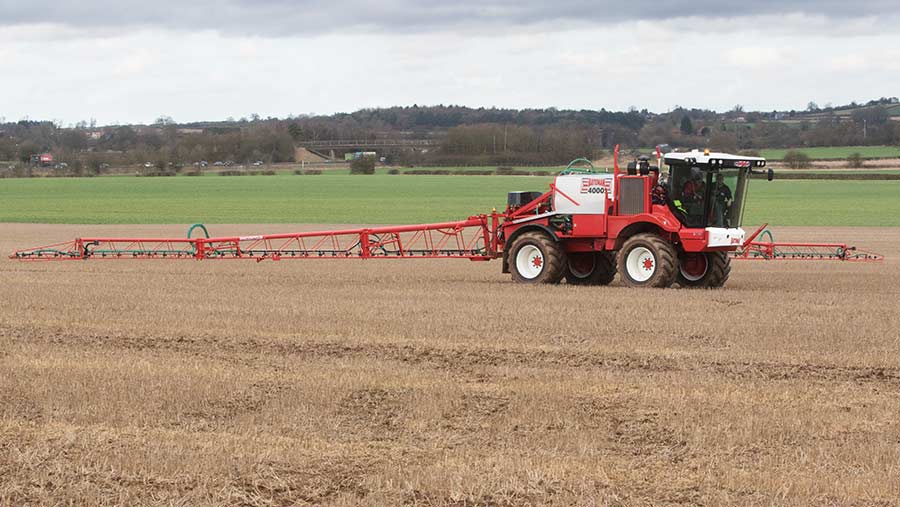 Firm UK favourite Bateman was showing off the latest version of its RB35 sprayer that sits below the range-topping RB55.

It was first launched back in 2006, but has had plenty of tweaks along the way, such as the recently introduced 3D cab.

This is designed and built by Bateman, is quieter than the old version and meets Cat 4 filtration standards.

Drive still comes from a 225hp John Deere engine, but this is now Tier 4, so uses Adblue to help make it meet emissions regulations. This powers a single hydrostatic pump that drives Bateman’s four-speed wheel motors. These can propel it up to 50kph on the road. 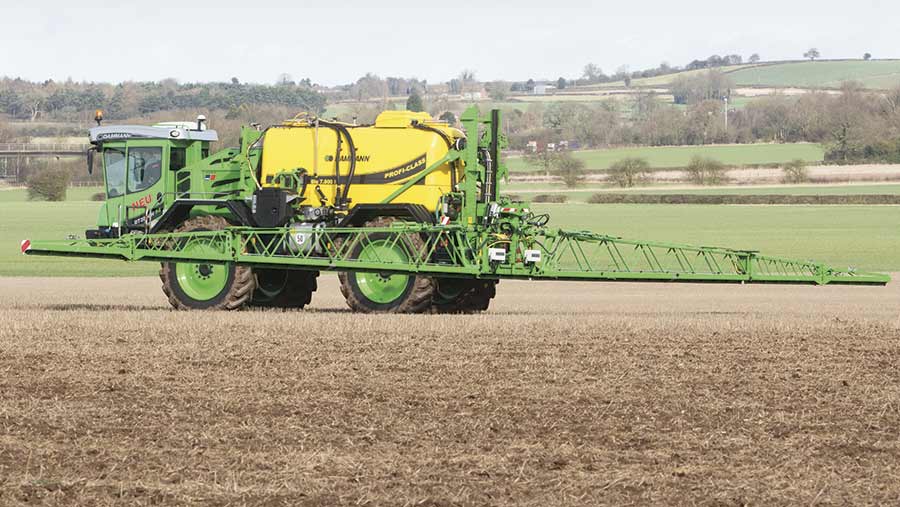 One of the bigger machines on display at the National Sprayer Demo day was Dammann’s DT28000H.

This is available through UK importer Chantry Dammann with tank sizes up to 7,000 litres and booms up to 42m.

However, it can also be scaled down to a 4,000-litre machine with 24m booms for those with less ground to cover,

Under the hood there’s a 280hp, six-cylinder MTU engine that drives the hydrostatic transmission. This has a top speed of 50kph and is also fitted with a cruise control system.

Booms are available with twin or triple fold and there is a single spray line with bodies that can carry up to four nozzles.

Dammann also builds a massive 12,000-litre tri-axle machine, but none of these are operating in the UK yet. 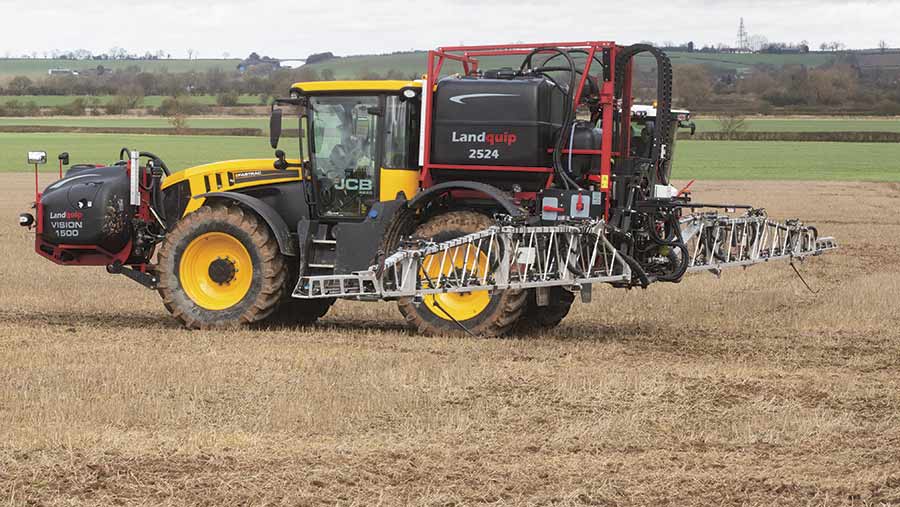 Visitors in the market for a flexible self-propelled machine could have a play on a Kellands Multidrive, with the F380 model fitted with a Landquip demount sprayer pack on show.

Launched in 2015, its unique selling point is its mechanical drive and long wheel-base for traction and stability on hilly ground and so far, three have been snapped up in the UK.

The model on demo was the last to be powered by a six-cylinder, 225hp John Deere power unit, with any new builds fitted with a pokier Cummins 6.7-litre 225hp Tier 4 Final engine.

The Landquip sprayer pack offers plenty of flexibility, with aluminium booms available from 18m to 44m, either cylindrical or rectangular stainless tanks from 3,000-5,000 litres and pump capacity from 300 litres/min up to a very high output of 1,300 litres/min for liquid fert users.

Nieuw-Vennep-based Dutch manufacturer Vicon is a relative newcomer to the self-propelled sprayer market and is yet to sell one of its iX-Drive offerings in the UK since its 2014 launch.

It may not take long, however, as the 36m iX-Drive 5240 demo model showcased plenty of interesting features, including hydraulically adjustable track width at the flick of a switch from its cab.

The sprayer pack comes with two boom material options – aluminium up to 30m and steel booms up to 40m.

Its iX-Flow ring line system is said to offer a high output of 400 litres/min for jobs such as liquid fertiliser, but unlike its high-output competitors, uses a narrow 20mm spray line, which prevents residue build-up when applying lower volumes. 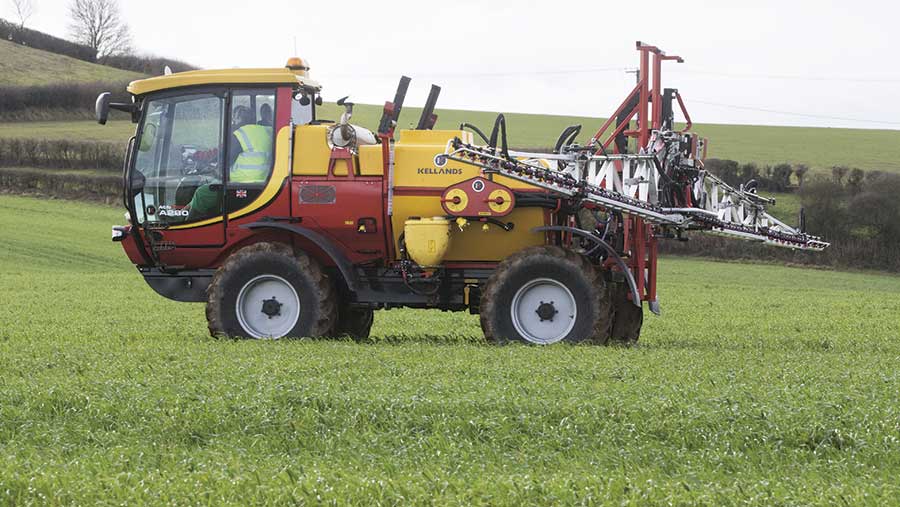 The lightest and most compact sprayer on show was Kellands’ Agribuggy A280, which weighs just 4.7t unladen and has some new and improved features for potential buyers.

The manufacturer says an electronic fill station control option will be available soon, allowing operators to control all filling and rinsing functions at the touch of a button for an extra £2,000.

The mechanical drive Agribuggy A280 is powered by a 2.8-litre, 148hp Cummins engine with a four-speed ZF automatic transmission, reduction hub axles and all-round brakes. 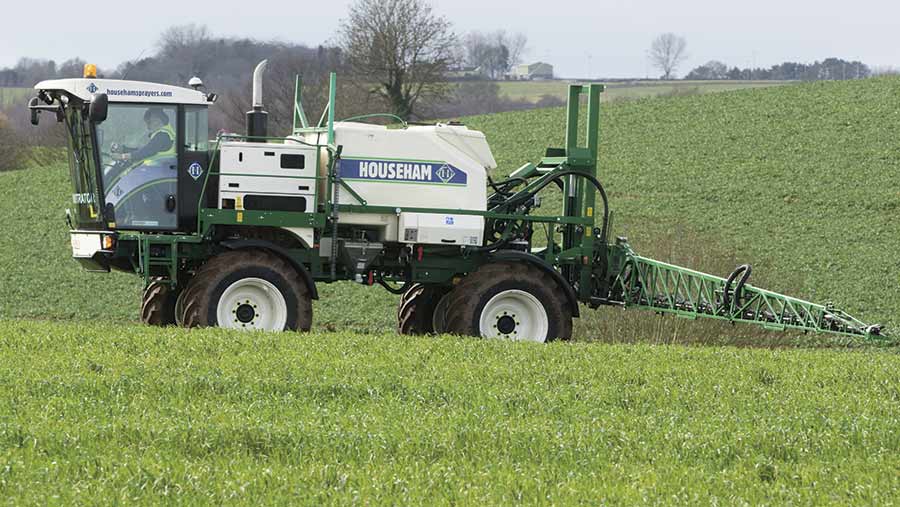 Launched in 2012, the Househam Merlin has proven a popular machine on medium- to large-scale arable units and there are now more than 150 working across the UK.

On show in Staffordshire was its flagship 6,000-litre M6, powered by a 240hp MTU (Mercedes) unit with Adblue and a hydrostatic transmission.

A more powerful 380-litres/min unit is fitted to a 36m machine and those requiring higher spray volumes can request an even larger pump and spray lines if desired. 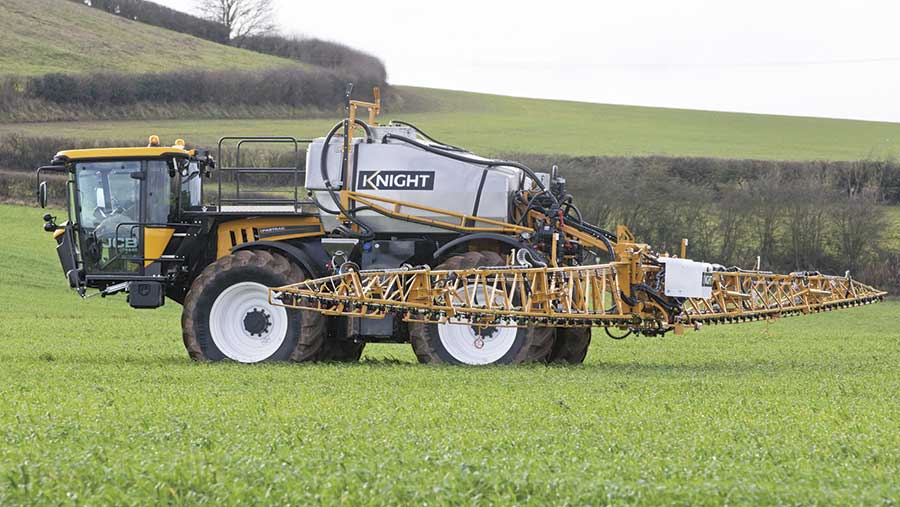 New to the market last year, Knight has now shifted three of its Forward Control conversions of the JCB Fastrac 4220 to large-scale contractors up in Scotland.

The buyers have been attracted by the machine’s mechanical four-wheel drive and diff lock plus CVT gearbox, for tackling any terrain and smooth and safe road transport.

The design also sees extra room for larger wheels to increase crop clearance and a bigger tank compared with typical tractor demount sprayers, with capacities up to 4,000 litres and boom widths up to 40m to offer high field output.

The 36m 4,000-litre version at the sprayer demo featured Knight’s 4D boom suspension system, which is a no cost option and is said to improve boom height control and spraying accuracy. 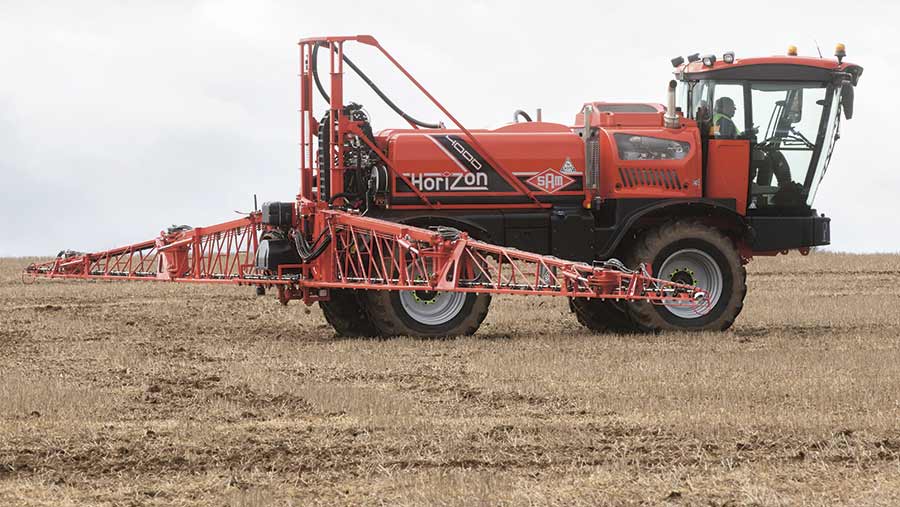 Norfolk-based Sands Agricultural Machinery were showing off a 30m version of its 4,000-litre Horizon 4, which replaced its popular Vision 4 two years ago.

The Horizon 4 is powered by a Deutz Tier 4 Final, six-cylinder turbo-charged engine, with a hydrostatic drive putting power to the ground via Poclain S18 wheel motors, which are fitted with independent front brakes for safer stopping at high road speeds.

The range benefits from the firm’s bespoke cab, which has a Category 4 filtration system, and its panoramic design has improved visibility and noise levels have been reduced. Booms are available up to 36m. 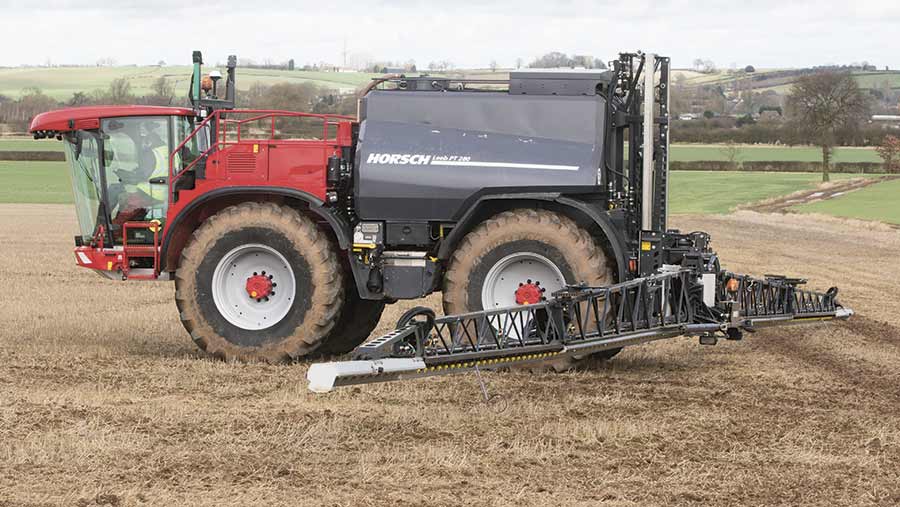 Those in the market for a high-output self-propelled machine were compelled to have a look at the Horsch Leeb PT 280 at the sprayer day, which carries a substantial 8,000-litre stainless steel tank on its back.

Aimed at arable units with 810ha or more, the huge tank and powerful 1,000-litre/min centrifugal pump lends itself to efficient liquid fertiliser application in addition to its pesticide application duties.

Powered by a 285hp MTU engine with Adblue, it is mechanically driven to get power to the ground and a two-speed stepless hydrostatic box keeps revs to a minimum to save fuel. It is also smooth on the road.

A long list of extras includes Horsch’s Boom Control Pro Plus, which adds an extra “elbow” to the boom and enables all three sections to pivot up or down and hug the terrain.

Due to the different ways manufacturers choose to price their machines, Farmers Weekly has decided to publish on-farm and list prices. If you see on-farm in brackets, expect to pay somewhere near that price. If you see list price, then there’s a sizeable discount to be had.