Sprayer manufacturers have used the UK’s biggest arable event of the year to launch updates and additions to their ranges. This year, Cereals saw five major companies unveil brand-new products. The Farmers Weekly team went to Cambridgeshire and took a look to see what they had to offer.

Blackgrass was a serious talking point as always at this year’s Cereals event, with machinery manufacturers showing off countless different machines and techniques to help deal with the troublesome weed.

Cambridgeshire firm Lite-trac’s offer of assistance came in the form of a prototype dual-use sprayer boom for boosting the output and precision of both Avadex and slug pellet applications.

See also: All the latest news from Cereals

Currently configured as a separate demount unit, the aluminium 36m booms comprises 24 1.5m sections. They should also be available to retrofit to SS3000 model sprayers.

The system has a 900-litre hopper on the boom and allows the user to switch between granular and spray applications from within the cab.

The unit can be automatically calibrated and is controlled by a Trimble FMX screen. Booms will be made to order, but with all the bells and whistles included it will cost roughly £48,000. 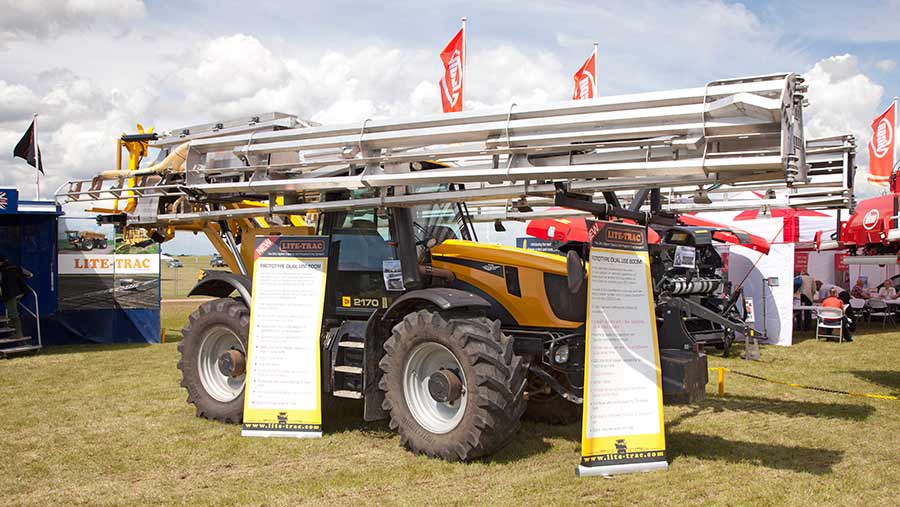 We have seen massive self-propelled sprayers from Challenger lolloping around the countryside for a few years, but now it’s decided to break into the trailed market, too.

The recently launched Rogator 300-series shares 70% of its components with its big brother, but buyers will get the option of a smaller 3,300-litre or standard 4,400-litre moulded tank, as well as a sophisticated boom suspension system. The centre frame is also borrowed from the Rogator 600, but to make it work as a trailed machine Challenger engineers have added a new chassis, drawbar and axle.

They have also shifted the 400-litre clean water tank to the front of the machine to ensure some weight stays on the tractor’s rear wheels as the spray tank empties.

Booms are aluminium affairs from Pommier and are available from 24-30m with 1m nozzle sections. These are currently limited to 30m to make sure they don’t clobber the tractor cab when they are folded for transport. The sprayers are also available with either a pto-driven pump or a CCLS hydraulic system.

Challenger is testing two Rogator 300-series machines in the UK, both sitting on massive 54-inch wheels. It says they will be available to buy from early next year and the list price for a 4,400-litre machine with 30m booms is £85,000. 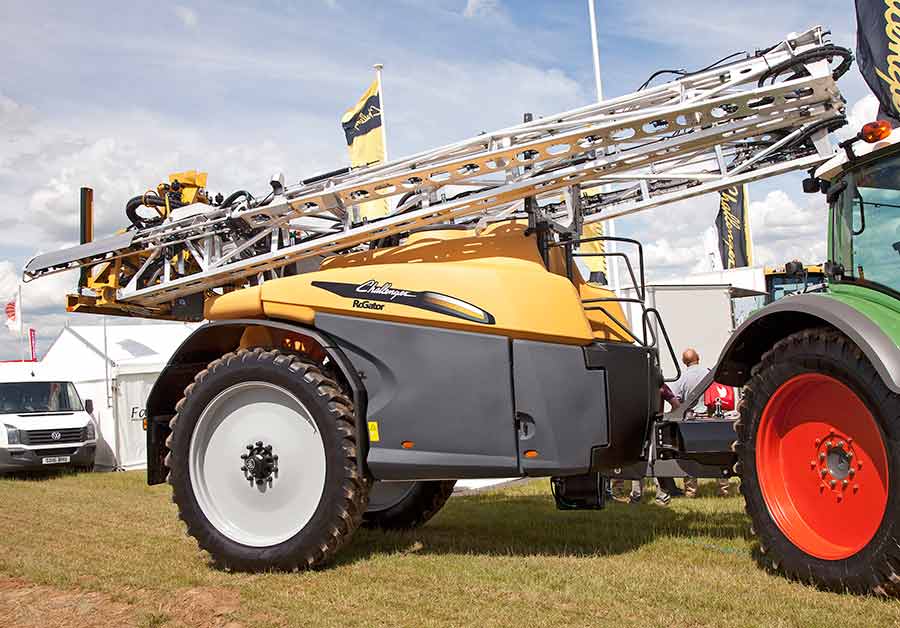 Chafer has made a return to the hydrostatic self-propelled sprayer market with a brace of new machines called the Interceptor and Defender.

Although the names suggest they would be more at home on a Mad Max film set than a Fenland field, Chafer says the machines have been given plenty of handy features to make life easier for sprayer operators. These include a nifty E-Plumbing system that allows all taps and valves to be controlled at the push of a button.

The Interceptor is the bigger of the two siblings and comes with a sizeable 5,000-litre stainless tank and 36m booms. The Defender, meanwhile, has the option of a 3,000- or 3,500-litre tank and booms up to 30m wide. They both share the same tank and filling layout, which is also used on the trailed models.

Cabs are Fritzmeier units – as used by Fendt on the Katana forager – but this time they have been pressurised to keep out any chemical vapours.

The first of these models should roll out next spring and prices are still to be confirmed. 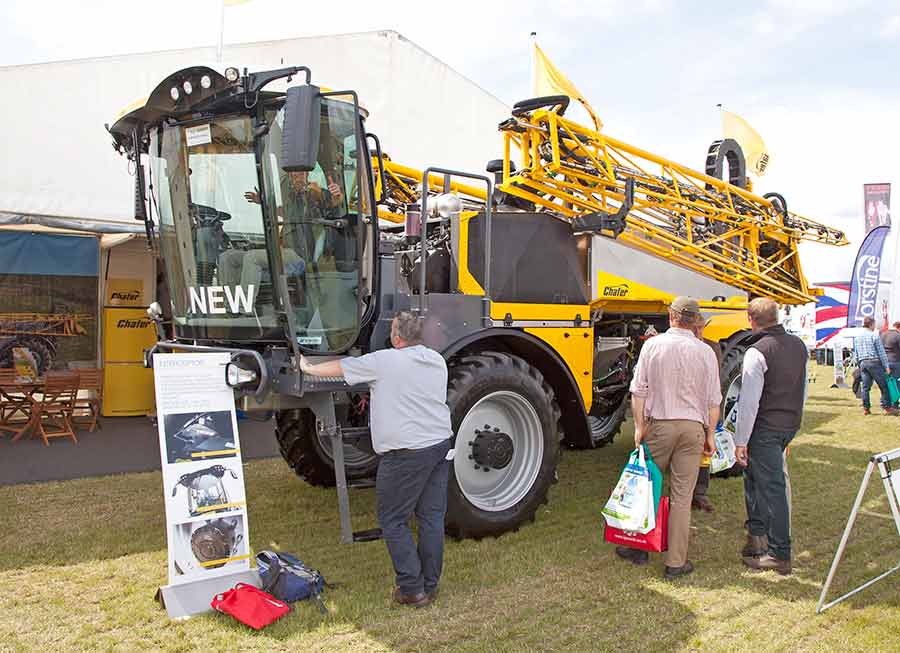 John Deere chose Cereals to lift the curtain on its long-awaited carbon fibre sprayer booms. These will be available on its larger R4050i self-propelled sprayer, which is set to join the existing R4040i.

The new machine shares the majority of features with the current model, including cab, engine and running gear. The new booms and larger 5,000-litre tank warrant the new badge.

Choosing carbon fibre will provide a 900kg weight saving over those with steel booms and should not only retain all the strength, but be about five-and-a-half times stronger.

This reduced weight should give ride improvements as well as better and quicker boom levelling from its current Boomtrac system, enabling lower boom heights at higher speeds.

The material is able to flex, which John Deere says will relieve booms from the stress that can cause fractures in metal versions. This is to cope with ridiculously high application speeds of 20-30kph.

The issue will be cost, as carbon fibre is notoriously expensive. It’s not like you can weld it up either, so goodness knows how to fix it if you hit a tree or post at high speed.

A test model will be at a farm in England by July and is set to stay for six to 12 months for testing. The system won’t be in production until early 2017, so the price is unknown. 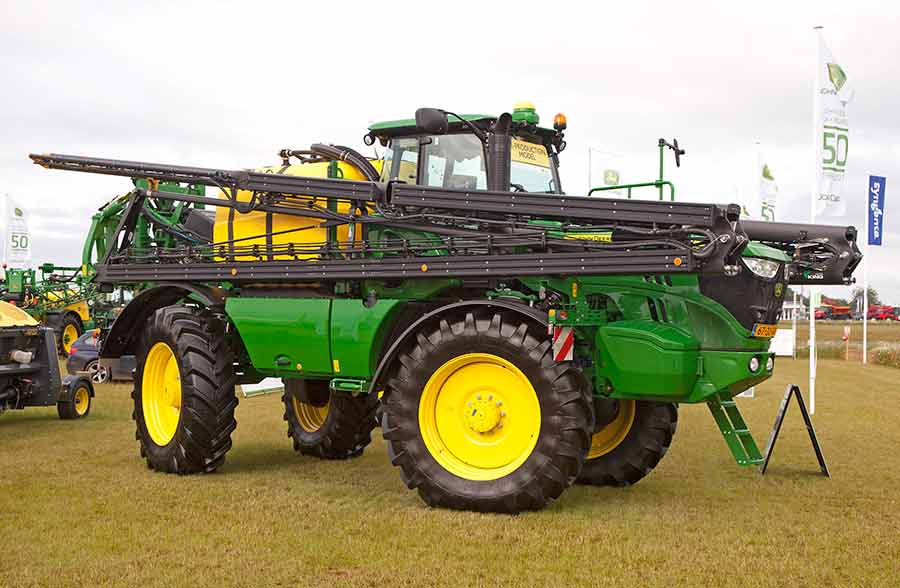 Its lowering cab was a big talking point when Tecnoma launched its Laser FC. Eagle-eyed attendees of Cereals will notice that Berthoud offer the same machine in different colours.

To meet emission regulations, Tecnoma has made a few adjustments to the engine and transmission. The three-stage hydrostatic gearbox has now been swapped for a more user- and eco-friendly CVT with cruise control. This allows the new Deutz 6-cylinder Tier4 engine to drop to lower revs when full power isn’t required. 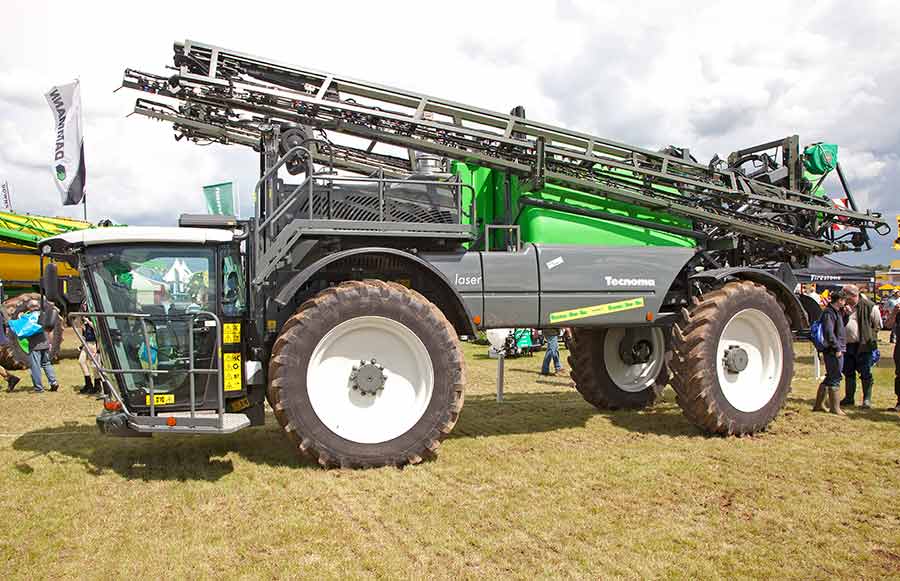