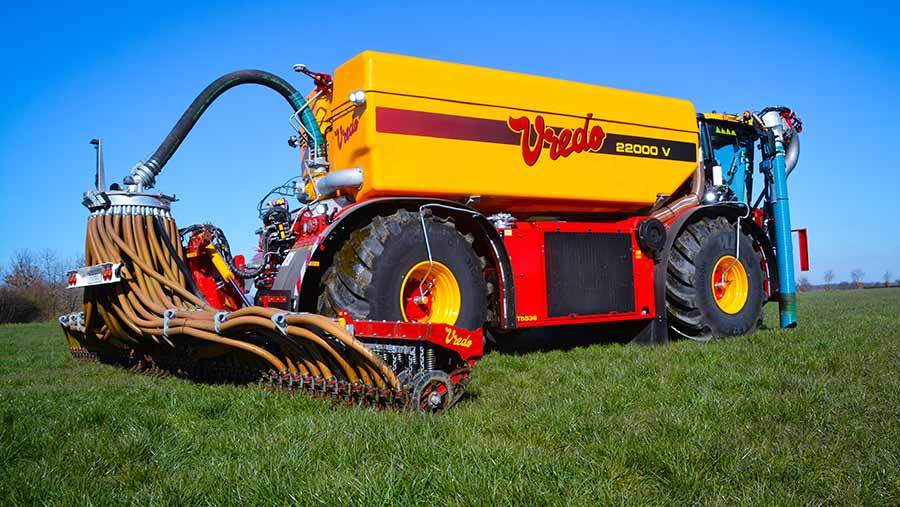 Vredo has added a mid-size model to its range of equal-wheeled self-propelled applicators.

This drives the firm’s new single-range VVT550 stepless transmission, which is good for a top speed of 40kph at just 1,080rpm.

A 12,000 litre/min pump unit is standard, but buyers have the option of a “high performance” upgrade that increases loading capacity to 16,000 litre/min. The latter will fill the 22cu m polyester tank in 90sec.

Also on the extras list is a telescopic 10in-bore suction arm that can swing both left and right for loading.

As with the other models, the pump and slurry tank can be removed, freeing up the tractor unit for other tool carrying duties.

Standard footwear is a set of four Mitas 900/60 R42s, with bigger 1000/65 R32s one of several options – along with a central tyre inflation kit to improve performance and reduce tyre wear in different conditions.

This should help minimise soil compaction when combined with the VT’s crab steering system, particularly given its near-20t operating weight.

Features of the suspended cab include automatic air conditioning, two 7in touchscreens and a joystick.

Trimble or John Deere RTK guidance is available to run section control, and a near-infrared sensor can also be fitted to monitor slurry nutrient composition.

The first series of VT5536s will be delivered next spring.