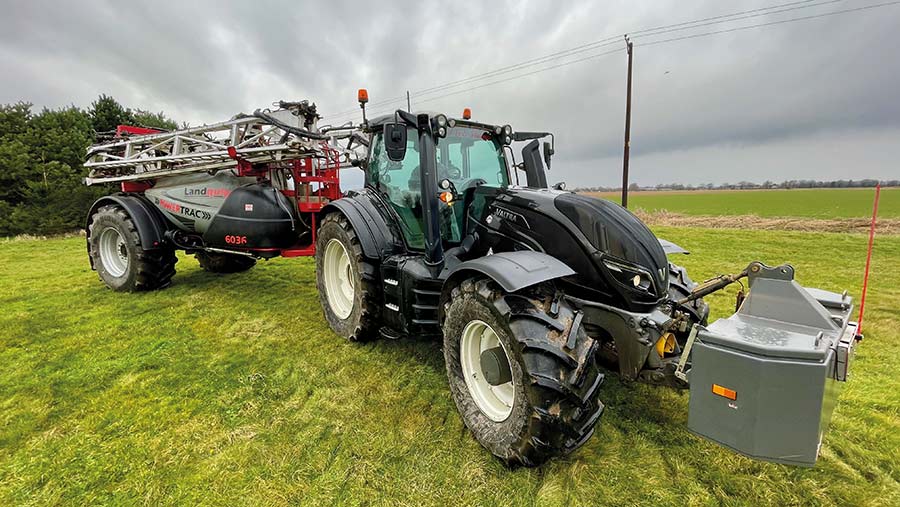 Driven wheels might be a familiar feature on big trailers and tankers but, in a bid to get operators out of the odd sticky situation, Suffolk sprayer-maker Landquip has now adapted the concept to work on its high-capacity trailed machines.

Over the past decade, tank capacities have grown significantly on self-propelled, mounted and trailed sprayers.

And while big volumes might do wonders in cutting downtime, the downside is the risk of compaction and ruts caused by all that extra weight.

As a result, a good number of operators have looked at ways of spreading the load.

It’s no coincidence that the increase in sprayer size has been accompanied by a move to more trailed outfits that distribute the weight over three axles rather than two.

Figures from the Agricultural Engineers Association suggest tractor-drawn machines now account for more than 40% of the sprayers sold in the UK, compared with one-third of the total 10 years ago.

That puts them on a par with mounted versions (30-40%) and well ahead of self-propelleds, which make up just one-fifth of sales.

But pulling an extra axle means there is additional draft load on the tractor and, in less-than-ideal conditions, traction can become an issue. The solution? Hydraulic wheel drive.

One of the first manufacturers to offer such an option was Landquip.

Using a system developed by Finnish firm Black Bruin, the Suffolk-based company has managed to integrate an intelligent drive arrangement into the hubs of its 6,000-, 7,000- and 8,000-litre trailed machines.

Dubbed “PowerTrac”, it provides up to 130hp extra tractive power to the sprayer wheels.

In theory, this three-axle, six-wheel-drive arrangement means the tractor simply propels itself, and the sprayer’s heavily laden rear rubber generates its own drive.

Because the implement is no longer a dead weight, the tractor doesn’t have to scrabble and squirm when the going gets tough.

In addition, it is no longer responsible for 100% of the propulsive drive, so it’s possible for the tractor to throttle back and notch up a couple of cogs, providing the potential for some fairly significant fuel savings. 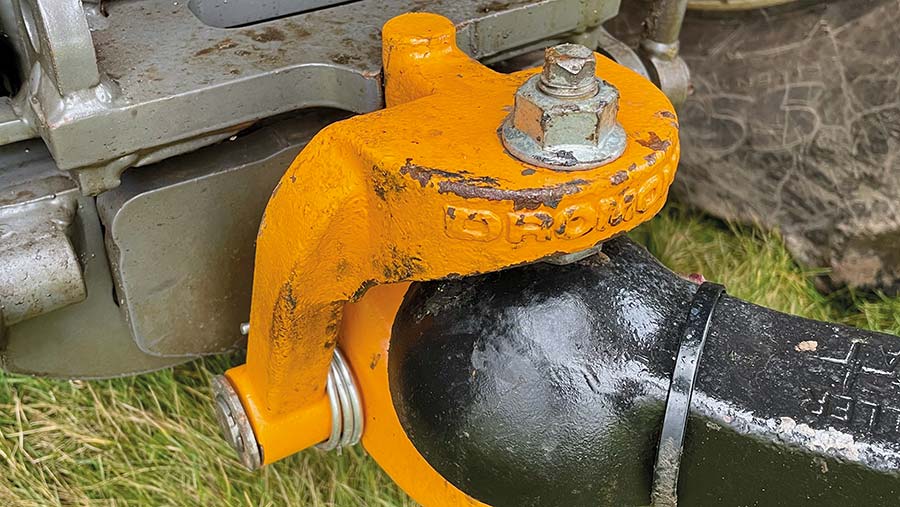 The first customer to take delivery of one of Landquip’s PowerTrac machines was suspension fertiliser specialist Jason Palmer.

Set up by his father in the 1980s, the business has run sprayers of all shapes, sizes and shades to perform this crucial job.

Initially Unimogs, MB Tracs, Big A and Terragator three-wheelers were equipped with home-built spray rigs with big-bore pipework and pumps capable of hoofing out liquid fert at more than 1,000 litres/min. 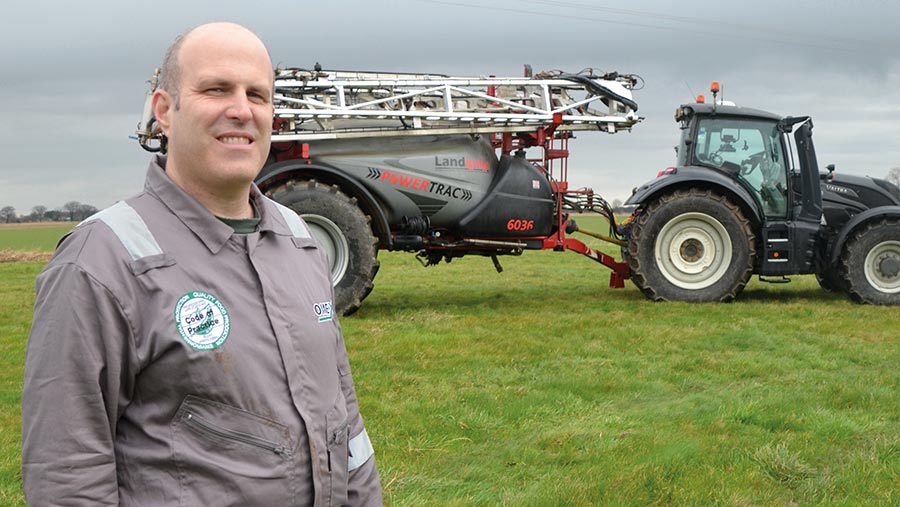 As time moved on, the Palmers switched to more conventional Rogator and Chafer self-propelleds, finally settling on running a 4,000-litre trailed Chafer alongside a Litetrac with a 6,500-litre tank.

“Once the season starts in late March it’s all about getting on with the job, which was why we went to the Litetrac,” explains Mr Palmer.

“Having a trailed machine to fill in when things got crazy busy was really useful and meant the tractor was available for other jobs on the home farm when required.

“It also proved that a tractor-pulled machine was capable of matching the output of a self-propelled.”

So when Mr Palmer’s father, Keith, wanted to retire from contracting and the business needed to go back to a single frontline machine, they had built up enough confidence to seriously consider moving away entirely from self-propelleds.

“The Litetrac was incredibly capable, but as a standalone machine, if it did break down we were a bit stuck,” says Mr Palmer.

“In contrast, if you have a trailed setup and the tractor is out of action, you just hitch on another and keep going.

“The expensive part of any spray rig is the power unit – you might as well spend that money on a tractor that is able to do other work in the off season, rather than being parked up in the shed for four months.” 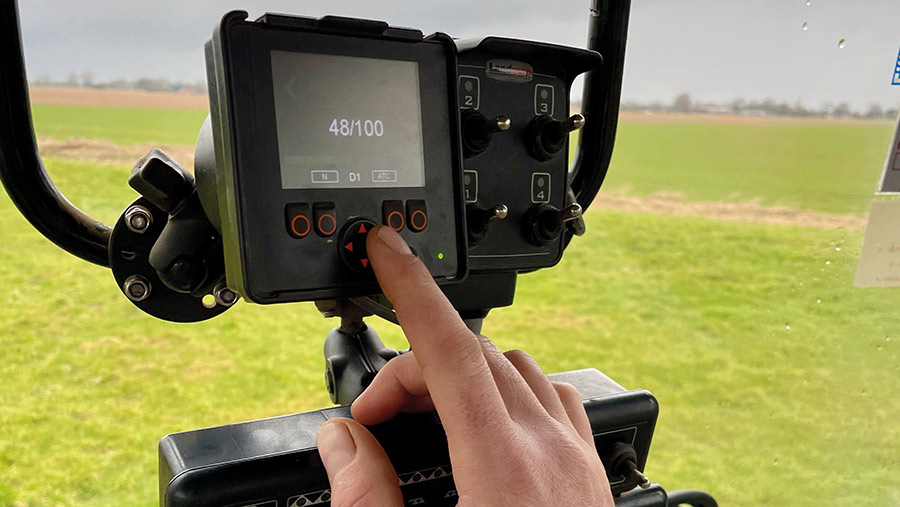 Having had 36m Pommier aluminium booms on the Litetrac, the Palmers were convinced that any replacement needed to follow suit.

“Moving to Pommiers was a revelation for us, and the way the hydraulic suspension works is just fantastic. It keeps them steady and eliminates whip and yaw, particularly when you come to a stop at the end of a run.

“We’re often applying seed-bed fertiliser to rough ploughed ground and, as a result of the setups we’d had on previous machines, the booms would quickly start to suffer stress fractures and need regular repairs.”

As UK agents for Pommier, the Palmers had already dealt with Landquip so, when it came to looking at a new trailed sprayer, the Suffolk company was one of the front runners. 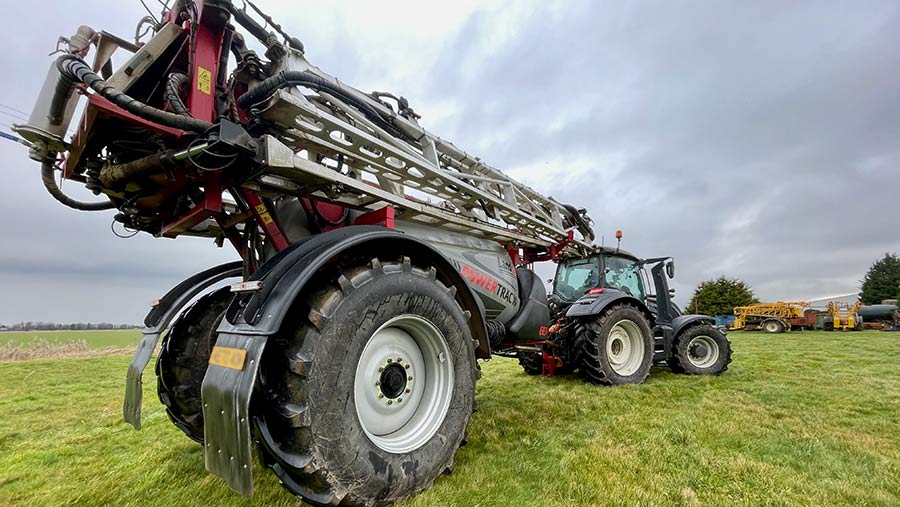 “Having made the decision that our next frontline machine would be a trailed unit, we started looking at our options,” says Mr Palmer.

“One of the most critical factors when applying suspension fertiliser is tank design.

“Because you tend to get a lot of residue, it can’t have any nooks and crannies and needs to be easy to clean out. Even the companies making purpose-built fertiliser machines hadn’t got that right.

“When we looked at the Landquip we were pleasantly surprised on this front and, having had experience of its backup with the booms previously, we felt it was the way to go.”

The specification for a 6,000-litre bespoke fertiliser application machine was drawn up to include a high-output 1,300-litre/min Hypro pump with 50mm pipework running to 12 anvil-type “splash-plate” nozzles with individual shut-off valves.

“We knew pretty much exactly what we wanted and Landquip was happy to oblige. Then, at the last minute, it threw in a bit of a wildcard question – had we considered a driven axle?,” he says.

“It was something I had always thought was cost-prohibitive and, as a £20,000 extra, it certainly wasn’t cheap. But when I went away and thought about it, I started to come around to the idea.

“Often we’re applying fertiliser in the spring when ground conditions can be a bit iffy and I’ll have to skirt around wet patches to avoid getting stuck – with the result that those areas don’t get the product they need.

“Having all six wheels driving potentially meant I could avoid that issue.” 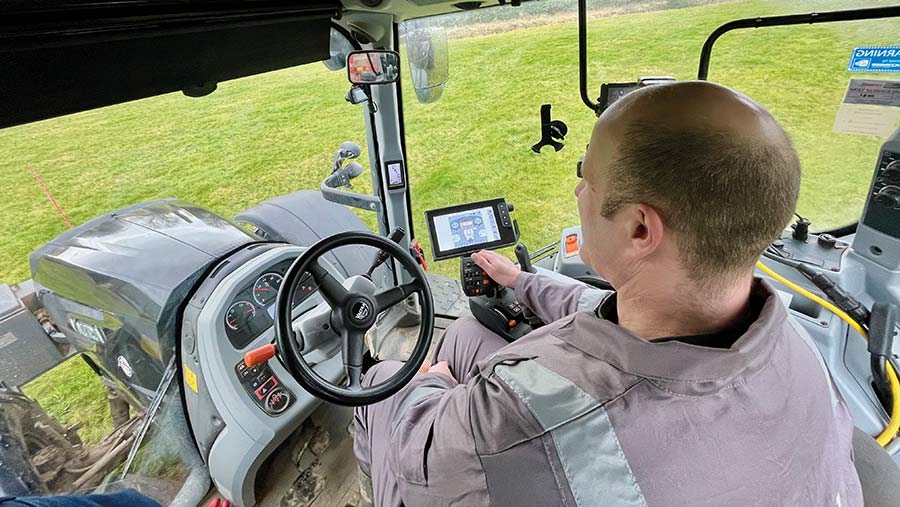 Having covered over 8,500ha last season, the Landquip PowerTrac has lived up to expectations.

There was little question as to whether the liquid distribution system would do the job, as it is virtually identical to that of the Litetrac.

“When we had Renson pumps on 24m machines they were fine, but the Hypro is the only pump that will generate enough pressure to provide consistent coverage across 36m when running at 1,500-2,000 litres/ha,” says Mr Palmer. 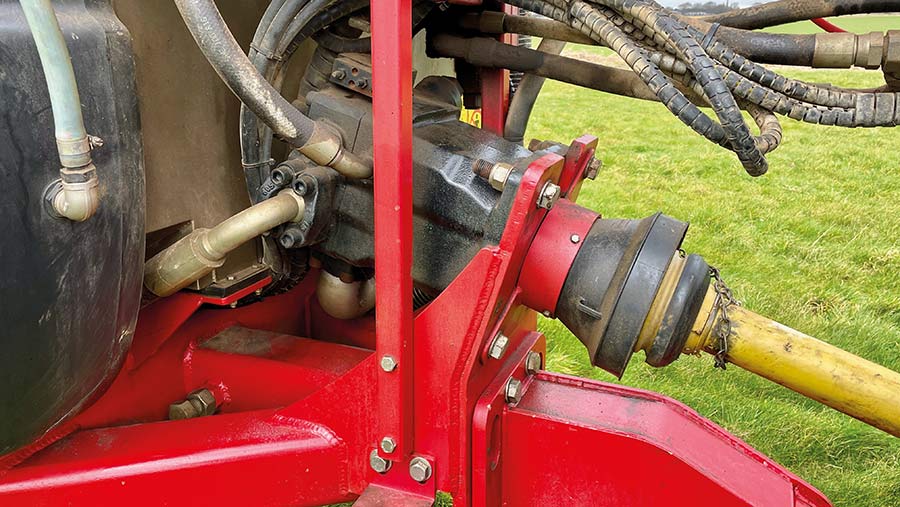 “The only modification was to position the pump 20cm lower. Initially, we had problems with it drawing air when priming. Just dropping it that little bit means it’s always gravity fed.”

The Landquip’s Arag rate controller is pretty much industry-standard with a bank of toggle switches for section control linked via Isobus into the Valtra’s SmartTouch armrest screen.

But being designed more for conventional spray applications rather than liquid fertiliser, the system does have one weakness.

As it is set up to work on flow rates rather than pressure, the control box can’t take account of changes in the specific gravity of different products.

Consequently, when switching between fertilisers and farms, Mr Palmer has to calculate a correction factor to account for the varying density of different liquids. 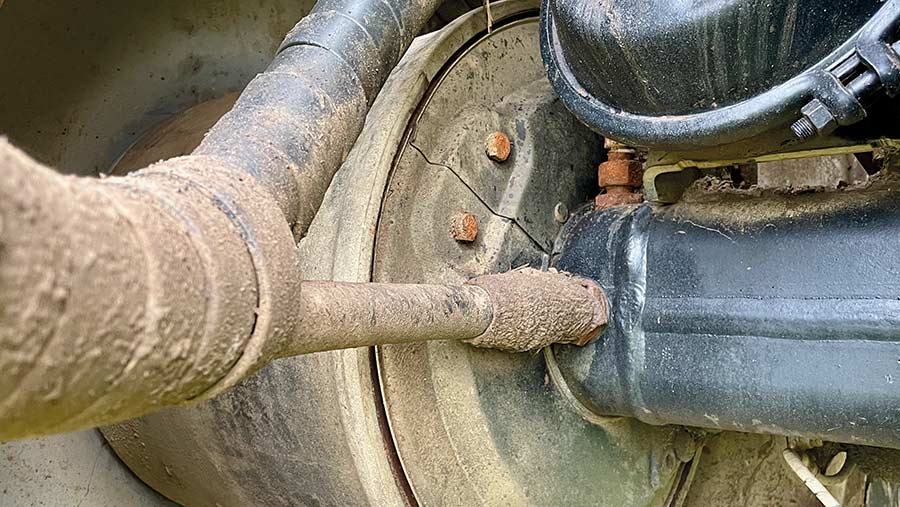 Oil flow for drive to the rear axle is generated by a monstrous pto-powered hydraulic pump nestled in the sprayer drawbar.

The clever bit is the Black Bruin control box that monitors the forward speed and automatically adjusts output, with the operator able to tweak just how much drive comes from the rear wheels.

Even with the tractor in neutral the system will comfortably propel both machines along at speeds of up to 18kph.

In standard format, the self-contained hydraulic system would also be used to run the spray pump, but Mr Palmer opted to have it piped through the spool valves instead.

“When it’s dry and there is no risk of making a mess, I wanted to be able to run without sprayer wheel-drive to minimise wear on the system. Running the pump from the tractor made sense,” he says.

“If, at any point, I notice the tractor wheels start to scrabble I can just flick the system into drive. On one occasion I wasn’t paying attention and the tractor did bog down.

“Then I just knocked the transmission out of gear, put the sprayer wheel motors in reverse and it hauled the whole rig out backwards. It’s like having your own dedicated recovery service.” 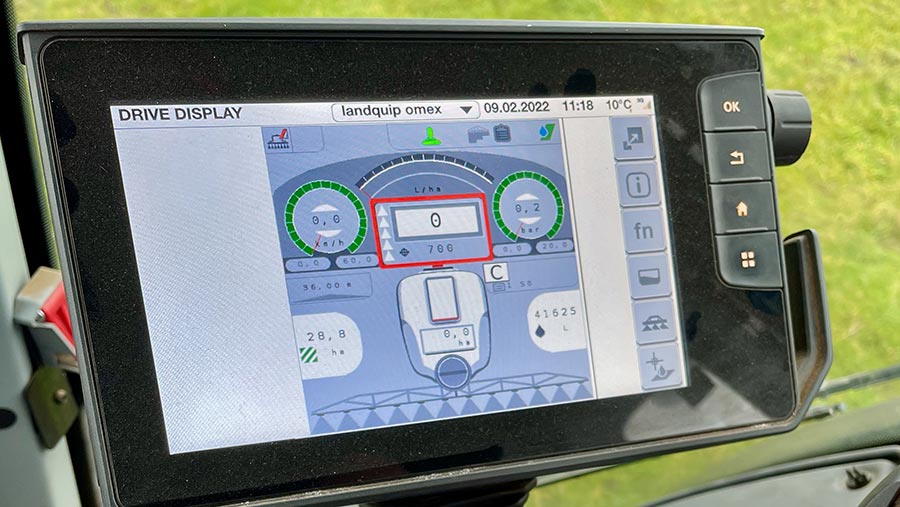 When it comes to justifying the additional expense of the driven axle, Mr Palmer is in no doubt it was the right decision.

“In previous years I could expect to get stuck in wet patches four or five times a season. I haven’t once come close to it yet with the PowerTrac system engaged – that’s a serious saving in downtime.

“The other big advantage to our customers is that with six wheels driving, the tractor is never scrabbling, so you don’t get surface damage and rutting. More importantly, I’m not having to pull out and miss patches.

A Claas Axion 810 was the main tug for the Palmers’ Chafer Sentry trailed sprayer. But, with the arrival of the new Landquip imminent, a change of prime mover was on the cards.

“We cover some significant distances on the road, so comfort is a big factor for us and it was one of the key considerations when we started looking to replace the Claas Axion.

“On that basis, we looked at a JCB Fastrac because of its four-wheel suspension, but I felt there were too many compromises over a conventional tractor,” says Jason Palmer.

“We demoed a Valtra T234 and I was really impressed – with air suspension for both the cab and front axle it rode almost as well as the JCB and was a good amount less money.

“I really like the Versu powershift transmission and, having done 1,450 hours in the past 18 months, it’s proved to be a good decision.”